The CircleCI Optimizations Cookbook is a collection of individual use cases (referred to as “recipes”) that provide you with detailed, step-by-step instructions on how to optimize your pipelines (the mechanism for taking code changes to your customers). Pipeline optimizations that increase build speed and security have a positive impact an organization’s overall development and operations KPIs.

The recipes in this guide will enable you to quickly and easily perform repeatable optimization tasks on the CircleCI platform.

Sometimes when you are using the CircleCI platform, you may encounter unexpected lags in pipeline performance, which can negatively affect your ability to perform critical organizational functions. These performance bottlenecks can not only impact overall performance, but also cause workflow and build failures. These “hiccups” can cost you money in terms of credit usage, resources, and individual time spent reducing bottlenecks.

One of the quickest and easiest ways to optimize your builds and workflows is to implement specific caching strategies so you can use existing data from previous builds and workflows. Whether you choose to use a package management application (e.g. Yarn, Bundler, etc), or manually configure your caching, utilizing the best and most effective caching strategy may improve overall performance. In this section, several different use cases are described that may assist you in determining which caching method is best for your implementation.

If a job fetches data at any point, it is likely that you can make use of caching. A common example is the use of a package/dependency manager. If your project uses Yarn, Bundler, or Pip, for example, the dependencies downloaded during a job can be cached for later use rather than being re-downloaded on every build. The example below shows how you can use caching for a package manager.

Notice in the above example that you can use a checksum in the cache key. This is used to calculate when a specific dependency-management file (such as a package.json or requirements.txt in this case) changes so the cache will be updated accordingly. Also note that the restore_cache example uses interpolation to put dynamic values into the cache-key, allowing more control in what exactly constitutes the need to update a cache.

Note: Before adding any caching steps to your workflow, verify the dependencies installation step succeeds. Caching a failed dependency step will require you to change the cache key in order to avoid failed builds due to a bad cache.

Because caching is a such a critical aspect of optimizing builds and workflows, you should first familiarize yourself with the following page that describes caching and how various strategies can be used to optimize your config:

When running tests on the CircleCI platform, one of the primary considerations you will want to make is how you can optimize the testing process to minimize credit usage and improve overall testing performance and results. Testing can sometimes be a time and performance-intensive process, therefore, the ability to reduce testing time can be a significant boost to your organizational goals.

There are many different test suites and approaches you can use when testing on the CircleCI platform. Although CircleCI is test suite agnostic, the example below (adapted with permission from the developer who wrote about this test optimization use case in his blog post) describes how you can optimize testing using Django and the CircleCI platform.

Testing optimization on the CircleCI platform for a Python Django project

Some organizations use CircleCI to run tests for each change before merging to the main branch. Faster tests means faster feedback cycles, which in turn means you can confidently ship code more often. Let’s take a look at a case study for a Python Django application’s workflow, that took more than 13 minutes to complete testing on the CircleCI platform.

Let’s take a closer look at the testing process in the figure above to better understand the time it took to complete the tests.

The following steps were performed during testing:

Typically, performing setup once, and then performing fan out steps, is a traditional way to reduce resource usage; however, in this example, the fan out steps proved to be very expensive in the following ways:

As you can see, there is a a significant amount of time being spent setting up the tests, without any actual tests being performed. In fact, this approach required 6.5 minutes before the actual tests were run, which took another 6.5 minutes.

Knowing that ~13 minutes was too long to perform the steps in this workflow, the following approaches were taken to optimize and reduce this time.

The CI test workflow was changed to no longer depend on building the base image. The test jobs were also changed to launch auxiliary services using CircleCI’s docker executor native service container support instead of using docker-compose. Finally,tox was run from the main container to install dependencies and run tests, which eliminates minutes used to save and then restore the image from the workspace. This also eliminated the extra start-up costs of the machine executor.

Installing dependencies in the primary container on CircleCI, rather than relying on a Dockerfile, may enable you to use CircleCI’s caching to speed up virtualenv creation.

Now that the test preparation time has been reduced, you may also wish to speed up the running of the actual tests. For example, you may not need to keep the database after test runs. One way you could speed up testing is to replace the database image used for tests with an in-memory Postgres image that does not save to disk. Another method you may wish to take is to run your tests in parallel/ instead of one-test-at-a-time.

The figure below illustrates how overall these changes can reduce the total workflow time. 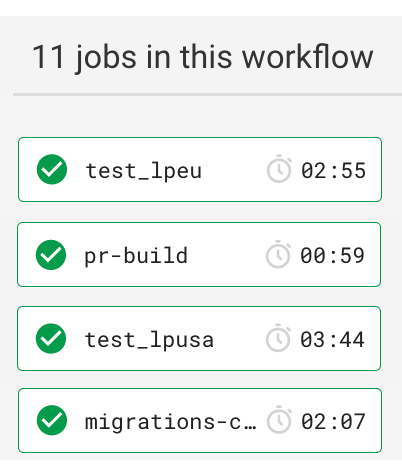 As you can see, there was no single step performed to reduce overall workflow time. For example, running tests in parallel would not have seen much benefit when most of the time was being used to prepare to run the tests. By recognizing the differences between running tests on the CircleCI platform instead of a local context, and making a few changes to test preparation and execution, you may be able to see improved test run time.

Pipelines are often configured so that each time code is committed a set of tests are run. Test splitting is a great way to speed up the testing portion of your CICD pipeline. Tests don’t always need to happen sequentially; a suite of tests can be split over a range of test environments running in parallel.

Test splitting lets you intelligently define where these splits happen across a test suite: by name, by size etc. Using timing-based test splitting takes the timing data from the previous test run to split a test suite as evenly as possible over a specified number of test environments running in parallel, to give the lowest possible test time for the compute power in use.

To illustrate this with CI config, take a sequentially running test suite – all tests run in a single test environment (docker container):

To split these tests, using timing data, we first intoduce parallelism to spin up a number (10 in this case) of identical test environments. Then use the circleci tests split command, with the --split-by=timings flag to split the tests as equally as possible across all environments, so the full suite runs in the shortest possible time.

To give a quantitative illustration of the power of the split-by-timings feature, adding parallelism: 10 on a test suite run across the CircleCI application project actually decreased the test time from 26:11 down to 3:55.

Test suites can also be split by name or size, but using timings-based test splitting gives the most accurate split, and is guaranteed to optimize with each test suite run; the most recent timings data is always used to define where splits happen. For more on this subject, take a look at our using parallelism to speed up test jobs.

Providing value to your customers is the top goal for any organization, and one can measure the performance of an organization by how often (frequency) value is delivered (deployment). High-performing teams deploy value to customers multiple times per day according to the DevOps Research and Assessment Report, 2019.

While many organizations deploy value to customer once per quarter or once per month, the basics of raising this frequency to once per week or once per day is represented by the same type of orchestration added to an organization’s value pipeline.

To deploy multiple times per day, developers need an automated workflow that enables them to test their changes on a branch of code that matches exactly the environment of master, without being on the master branch. This is possible with the use of workflow orchestration in your continuous integration suite.

When you provide developers with a workflow that runs all of their tests in the master environment, but doesn’t run a deploy, they can safely test and debug their code on a branch until all tests are passing.

A workflow that runs all tests as if they were on master gives developers the confidence they need to merge to master knowing their code will not break or cause an outage or interruption to service for customers. The small investment in configuring such a workflow is well-worth the increase in deployment frequency of valuable changes to your customers.

A simple example would configure deployment to run only if a change is merged to master and the test jobs have already passed.

For an organization deploying multiple times per day, that configuration may be as simple as the following snippet of YAML:

The time difference in your organization’s frequency without a workflow to enable developers in the way described above will include the time it takes for them to ensure their environment is the same as production, plus the time to run all of the same tests to ensure their code is good. All environment updates and tests must also be completed by every developer before any other changes are made to master. If changes happen on master while they are updating their environment or running their own tests, they will have to rerun everything to have confidence that their code won’t break.

For an organization deploying on a slower cadence, a nightly build workflow can ensure that on any day an update is needed by customers, there is a tested and deployable build available:

The time difference includes the lag described above plus the duration of the pipeline run and elapsed time between when a developer finished a change and when the scheduled build runs. All of this time adds up and the more confidence developers have in the quality of their code the higher their deployment frequency.