This guide covers the steps required to publish an orb.

After authoring your orb, you can publish it with a semantically versioned tag, and the orb will appear publicly on the Orb Registry. 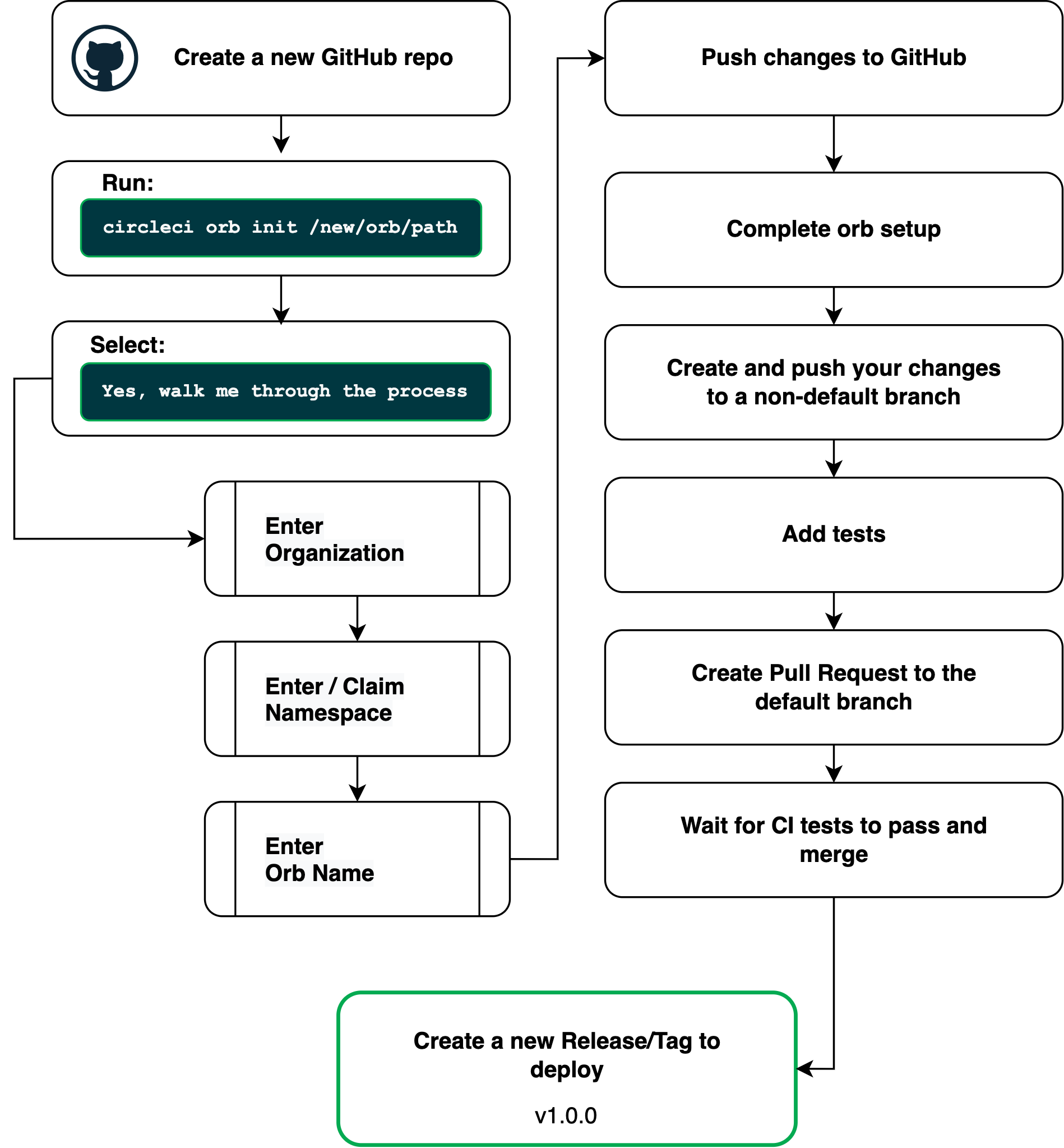 If you are publishing your orb using the Orb Development Kit, rather than manually, semantic releases are straight-forward using the steps set out in the following section. You can find a simplified version of the publishing process in the README.md file that was generated by the circleci orb init command at the start of the authoring process.

The steps below show how to issue a new semantic release of your orb. Once you have generated your orb sample project with the circleci orb init command, you will have been automatically migrated to the alpha branch. The name of the branch does not matter, just ensure any new features, bug fixes, or patches, are created in a non-default branch for your repository. Once you have added or updated your code and are ready to issue a release, continue with these steps.

If you want to dive deeper into the orb development kit and get a look at how the components work together to publish your orb, this section is for you.

The circleci orb init command is responsible for cloning an orb template repository for your orb, including a pre-defined CircleCI configuration file designed with our optimal orb development pipeline.

Included in the /.circleci directory is a README with a breakdown of the included workflows.

test-pack is the first of two workflows to run, and will execute each time code is committed to the repository on any branch.

A development version of the orb is created in the orb-tools/publish-dev job, and this job requires access to the Personal Access Token, which is secured in a Restricted Context. Using a Restricted Context in this way allows us to store our token as an environment variable such that the job can only be triggered by someone with access to the Context, therefore ‘securing’ the publishing stage.

The workflow runs as follows:

You can learn more about the testing jobs in the Orb Testing Methodologies guide.

This second stage of the pipeline runs the integration tests, testing the new orb’s functionality that has just been added and published to the development version..

After integration testing, and only on the default branch, the deployment job will run. orb-tools/dev-promote-prod-from-commit-subject is responsible for taking the SHA specific development version of the orb, and promoting it to a semantically versioned public release.

The fail-if-semver-not-indicated parameter is set to true by default, ensuring any commits without the proper semver tag in the commit title, result in a failed build.

You can optionally enable additional features such as publishing a version tag back to GitHub, and automatically posting new versions to the pull request via comment.

Your CircleCI orb will ultimately be hosted and displayed on the Orb Registry, however, if you would like to track your releases on GitHub, it is possible to automatically publish a version tag from CircleCI.

To push a tag to GitHub, CircleCI will need a deploy key with write access. Follow the linked docs to generate and add your deploy key. When complete, you will see a “fingerprint” generated "SO:ME:FIN:G:ER:PR:IN:T" for that key. Add your SSH fingerprint to your orb-tools/dev-promote-prod-from-commit-subject job via the ssh-fingerprints parameter.

You can find a full set of available commands, jobs and parameters for the orb-tools orb on the Orb Registry.