The Azure container registry is Microsoft’s own hosting platform for Docker images. It is a private registry where you can store and manage private docker container images and other related artifacts. These images can then be pulled and run locally or used for container-based deployments to hosting platforms.

In this tutorial, you will learn how to create a custom docker image and continuously deploy it to an Azure container registry.

Creating a container registry on Azure

To begin, you need to create a container registry on Azure to store and build your Docker containers. Click the Create button on your Azure portal home page and go to Containers -> Container Registry. 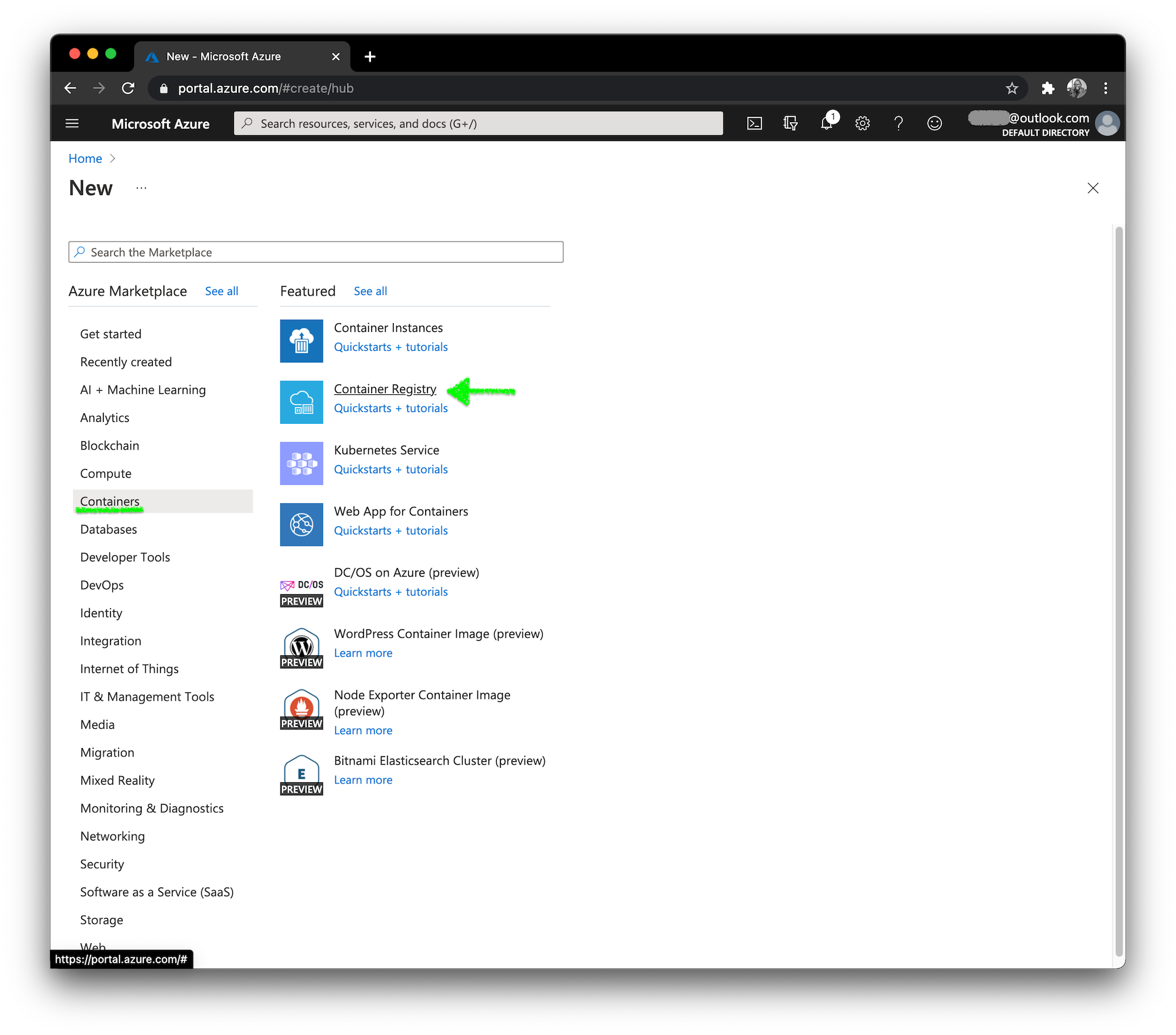 On the registry creation page, fill in the appropriate information including the name for your registry. 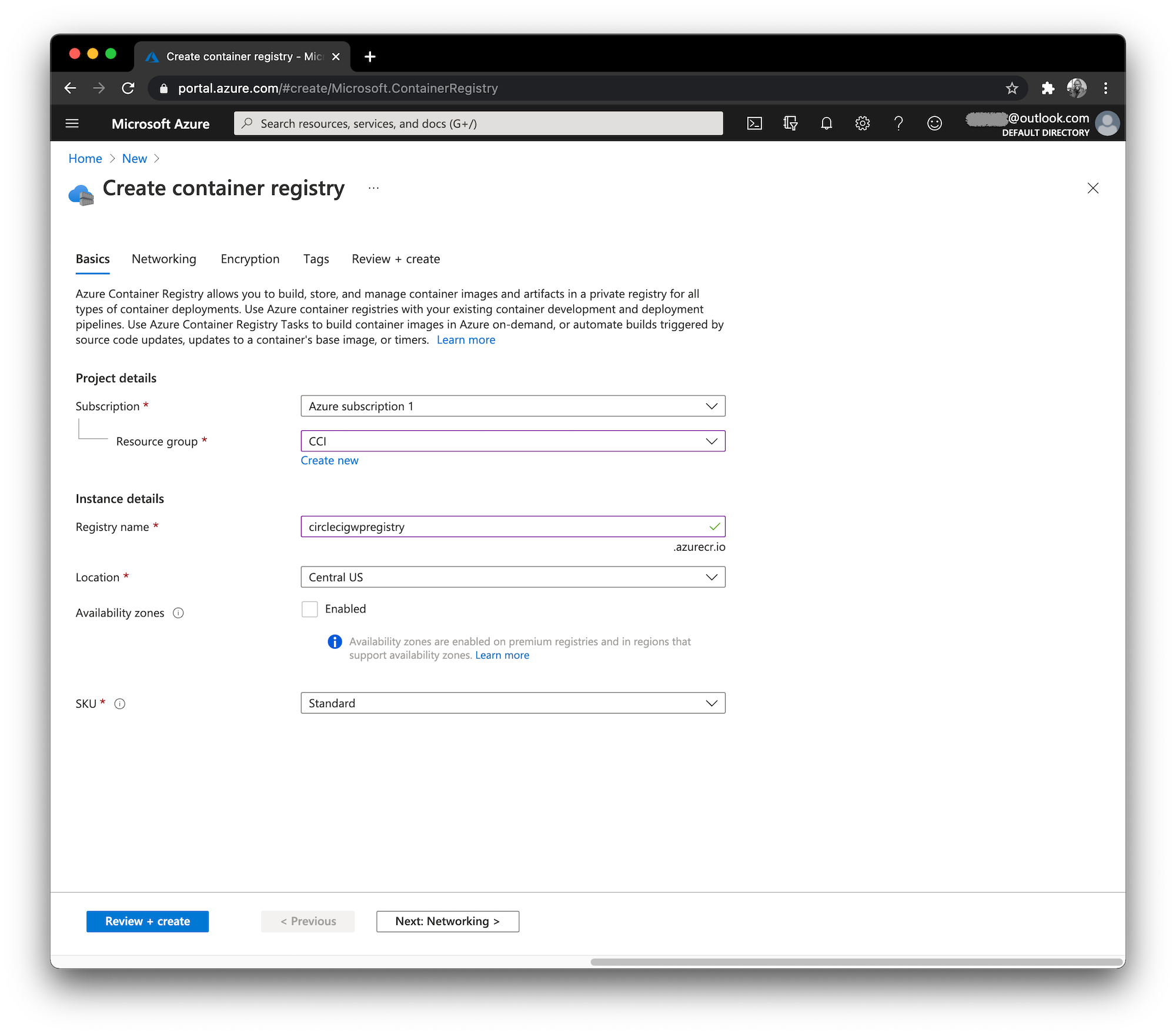 Click the Review + Create button. On the review page, confirm your registry information and click Create to trigger the registry creation process.

If you prefer using the Azure CLI to create your resources, you can also use this command to create the registry:

Note that I have named my registry circlecigwpregistry in this process. As mentioned earlier, you might want to use a different name. Be sure to substitute your registry name in all the steps in this tutorial going forward.

The next step is to get the Node.js project that will be used to build a Docker container and host it in the Azure container registry. Run the following command to clone the project:

This project is a basic Node.js API with two endpoints:

The next step is to write a custom Docker image to host the application in. Go into the root of the project folder (cd azure-custom-images) and create the Dockerfile file. Input the following code into the file:

The docker file uses node:current-alpine as its base image and sets the working directory in the container (that is to be created based on this image) to /app. The package.json file is first pulled into /app to install dependencies using npm install. Lastly, the remaining contents of the project are copied into the image and the application will be started using npm start at runtime. Refer to this page for more context about Docker images and containers.

Build the image by running the following command at the root of the project and tagging it with the name customnodeimage.

Note the dot (.) at the end of the command. Do not forget to add this; it defines the build context to be the current directory.

Once built, you can then run the following command to run the Node.js application as a container based on the customnodeimage Docker image.

The output of that command in your CLI should contain the line: Server running on localhost:1337 which indicates that the application is running.

The previous command forwards the application port in the container (1337) to port 1337 on your machine. You can navigate to http://localhost:1337 to view the application base endpoint. 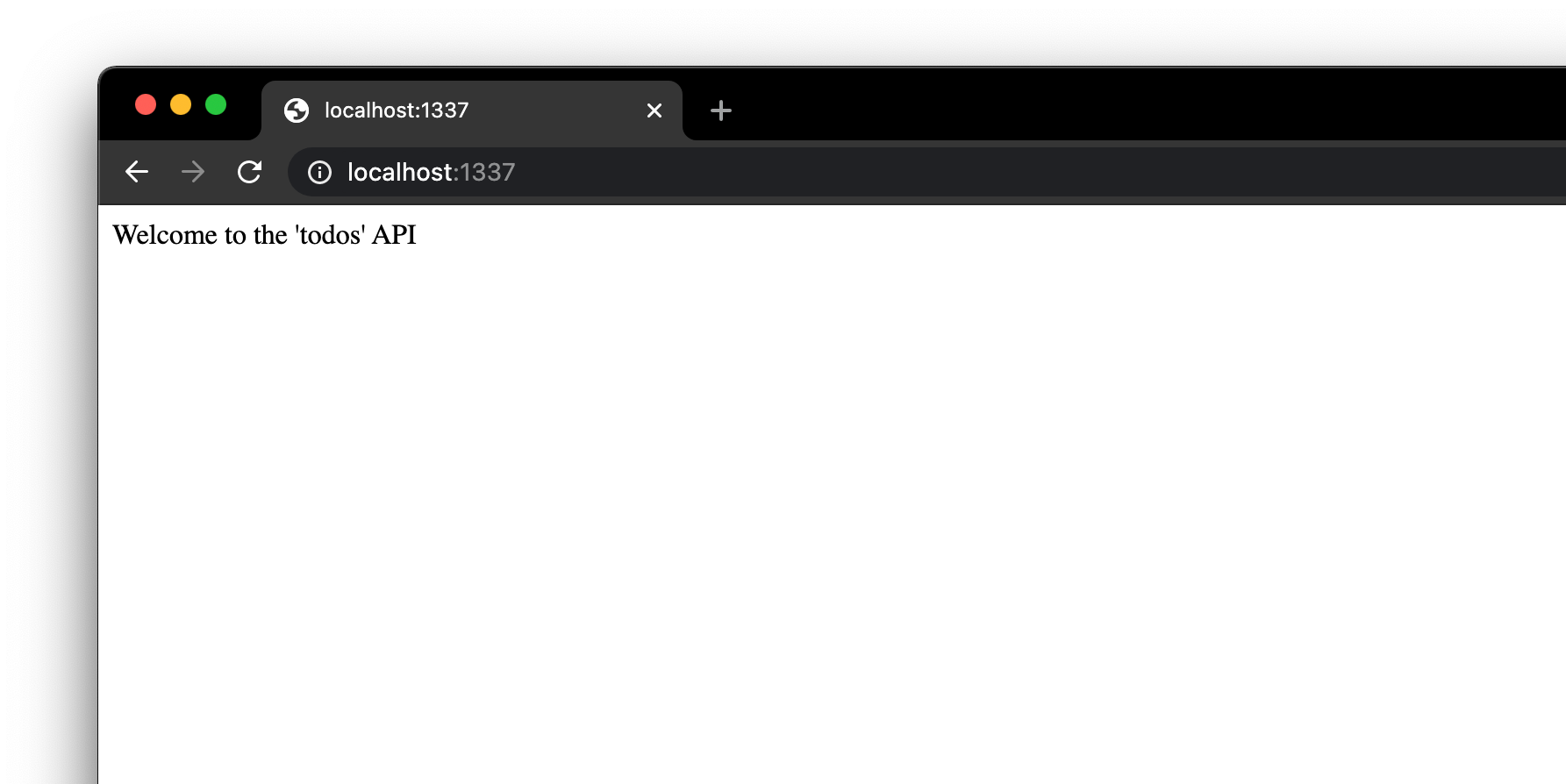 You can also visit the /todos route to load the todo objects. 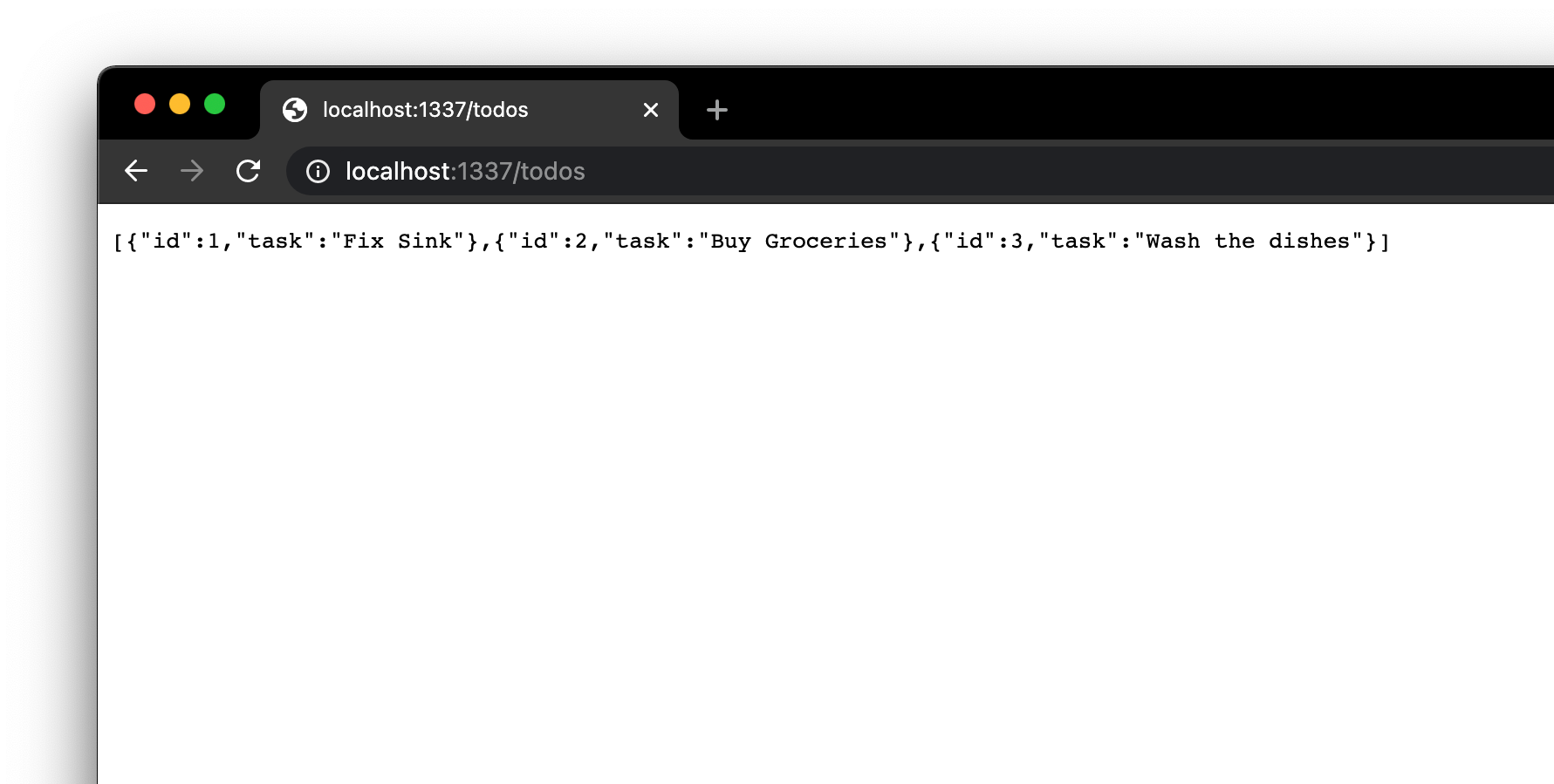 To get this image to your registry, run the following command to build the image on ACR from the Dockerfile. Replace <container_registry_name> with the name you gave the registry you created. 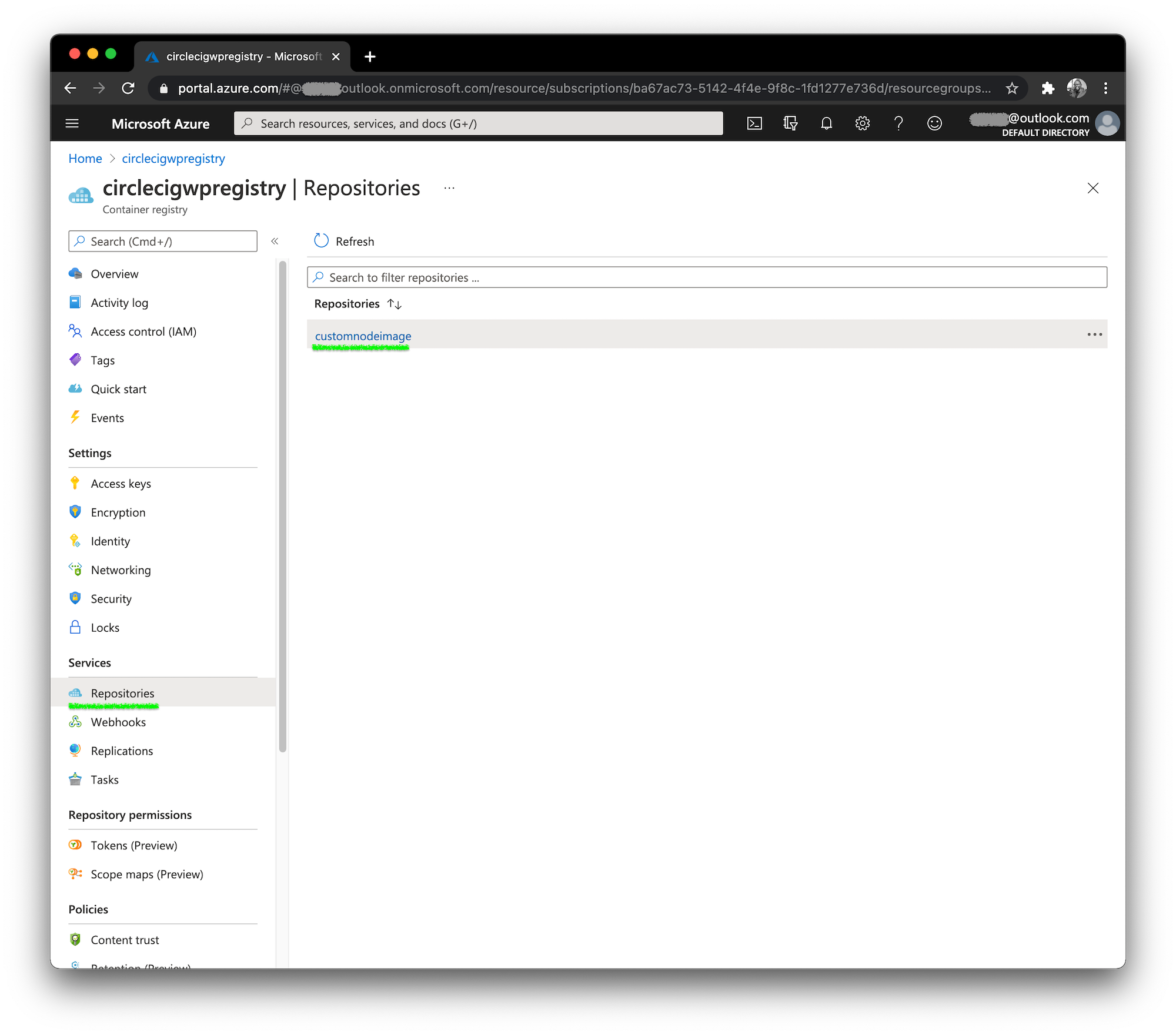 Setting up a build task for the container

When any update is made to the application code or the Dockerfile, we want the updates pushed and built on ACR, so that there is always an updated image on ACR. That is continuous deployment.

Fortunately, ACR can be configured to watch a branch on a remote repository and trigger builds based on updates to that branch. The strategy for continuous deployment of the image is to create a branch on the remote repository for the image that ACR will watch to trigger builds. Once the application tests pass, updates are then automatically pushed to the watched branch to trigger a rebuild of the image using the updated content.

Next, on the GitHub repository, create a buildimage branch from the main branch. 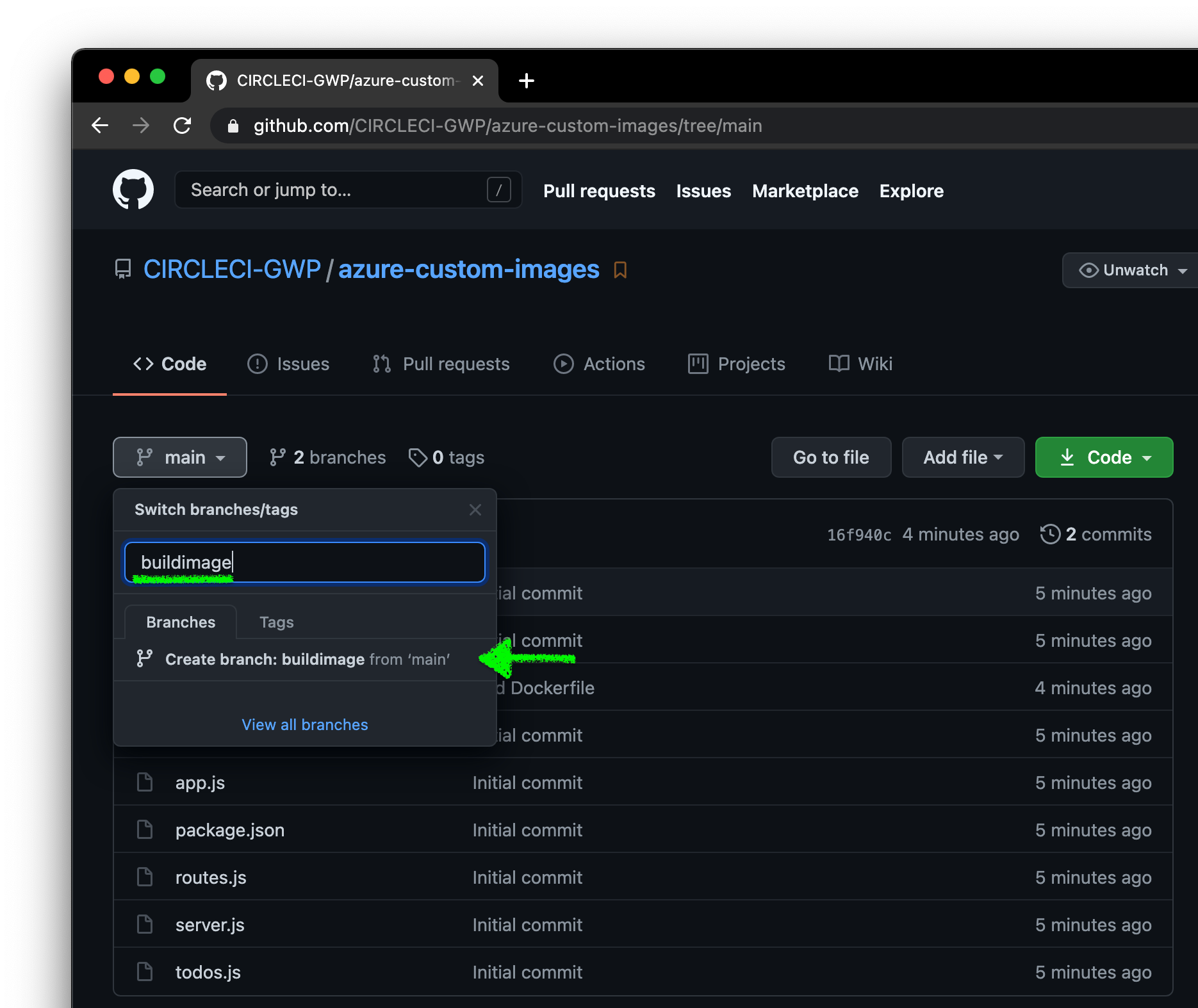 To create a GitHub token, go to Settings -> Developer Settings on your GitHub page. On the side menu, click Personal access tokens, then click the Generate new token button. Confirm your password to proceed and you will be taken to the token creation page. 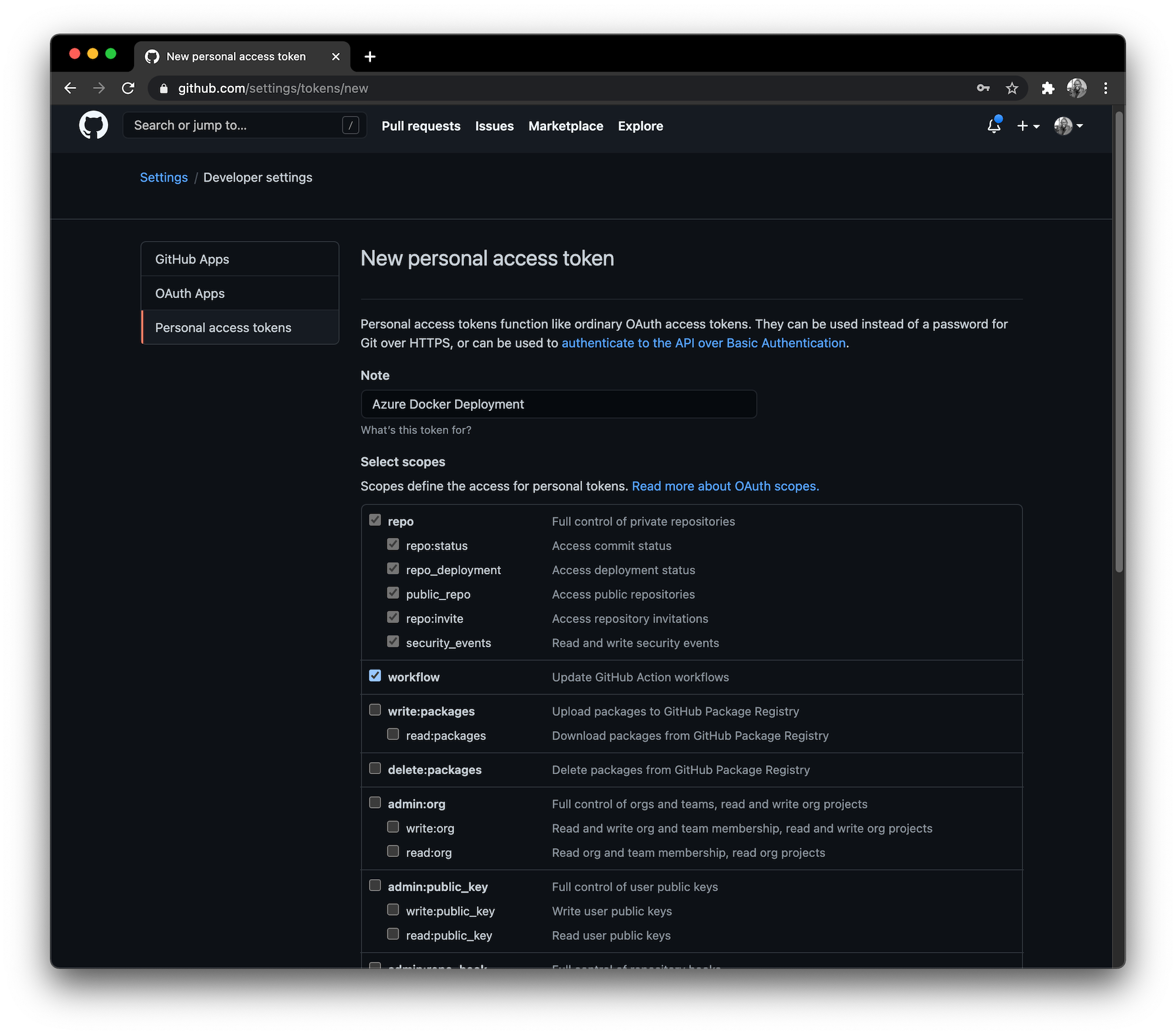 Click the Generate token button. Copy the token once it is generated. It will not be displayed again.

To create an ACR task, run the following command at the root of your project using your repository address, your registry name, and GitHub access token:

For the registry and repository in this tutorial, that will be:

This will create a buildcustomimage task that will rebuild the customnodeimage image each time updates are pushed to the buildimage branch. To view your newly created task, go to the registry page and go to Services -> Tasks. 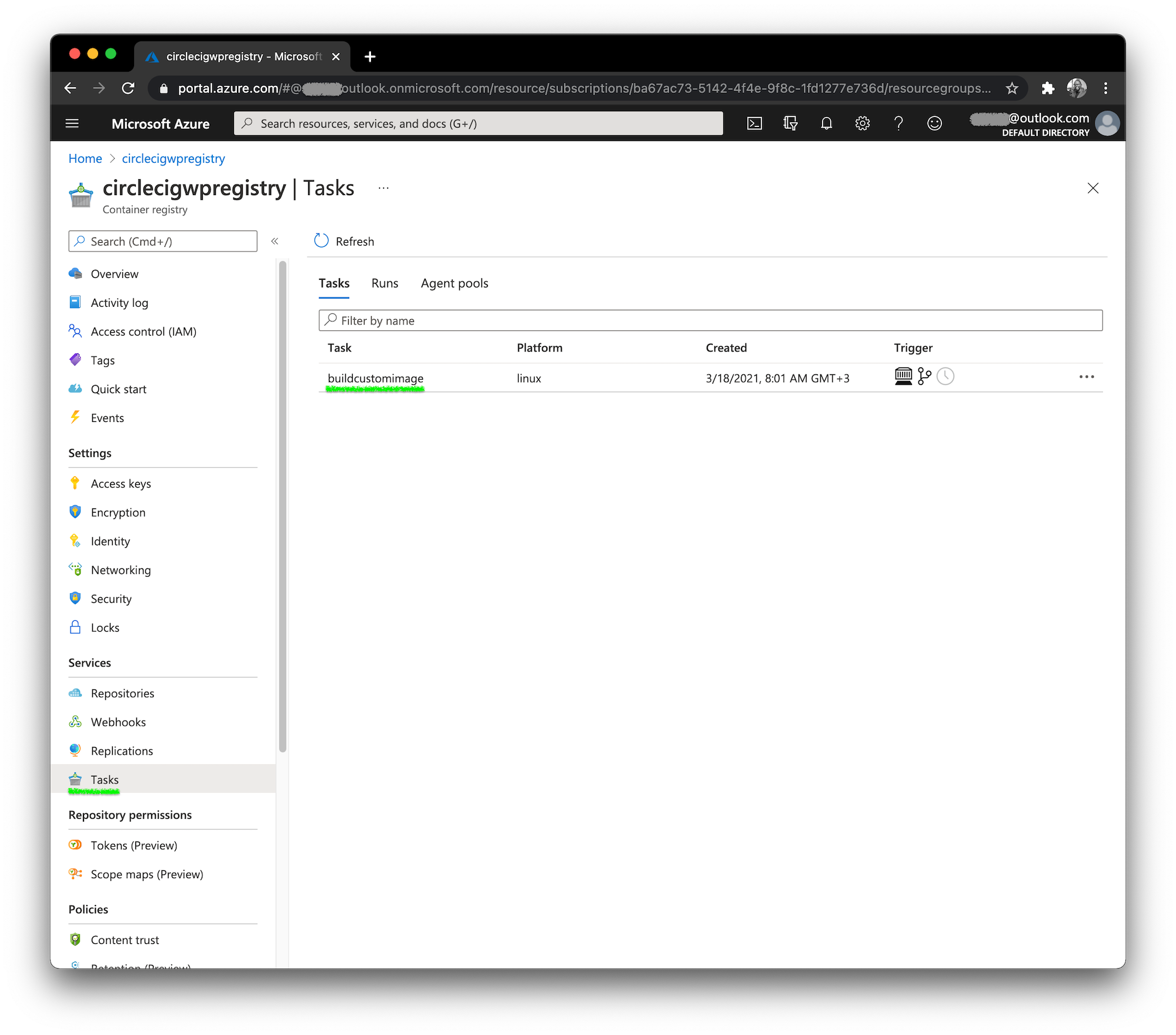 Now, go to the Projects page on the CircleCI dashboard. Select the GitHub account you are using for this tutorial to add the project. 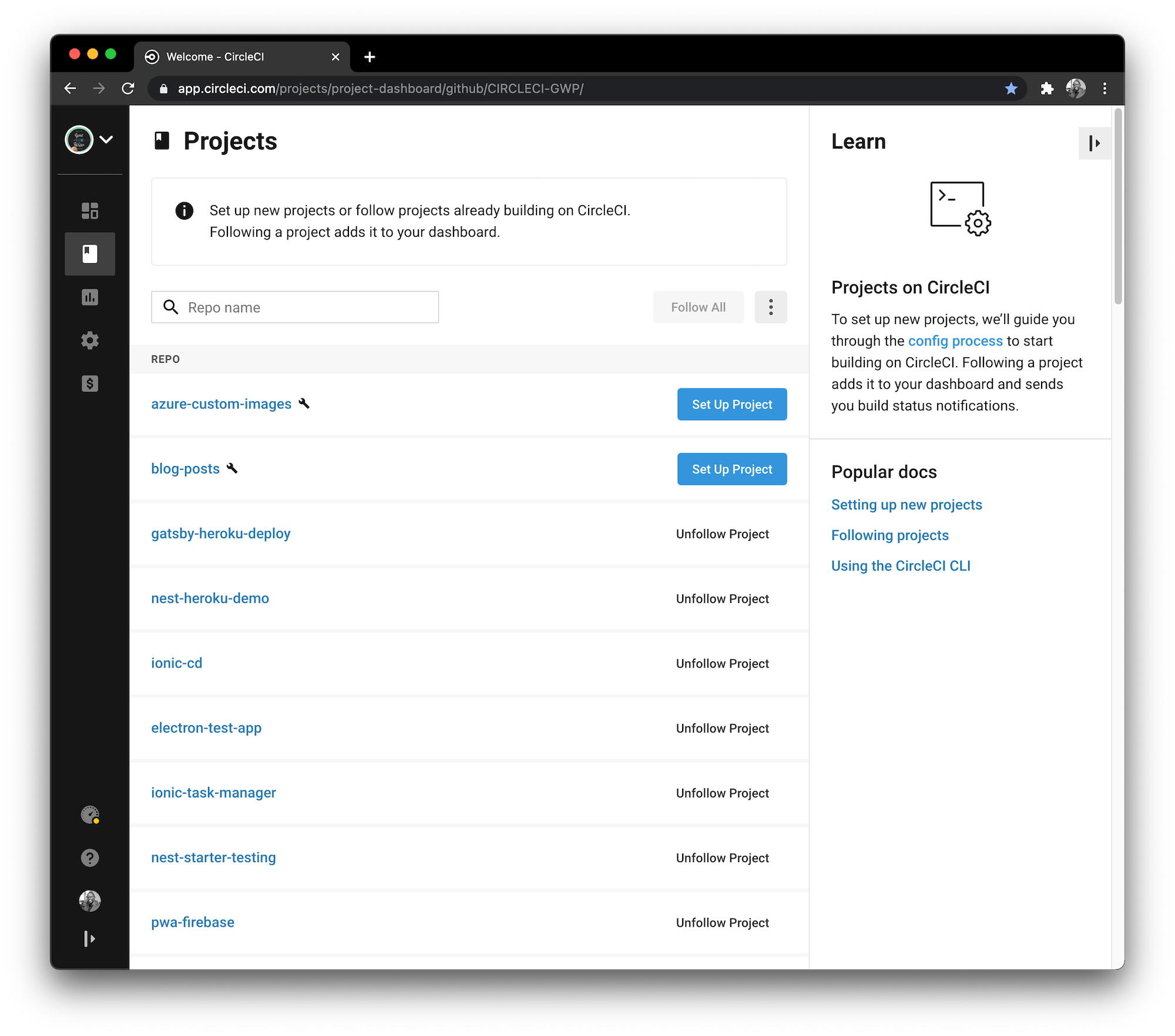 Click on the Set Up Project button to begin adding information. 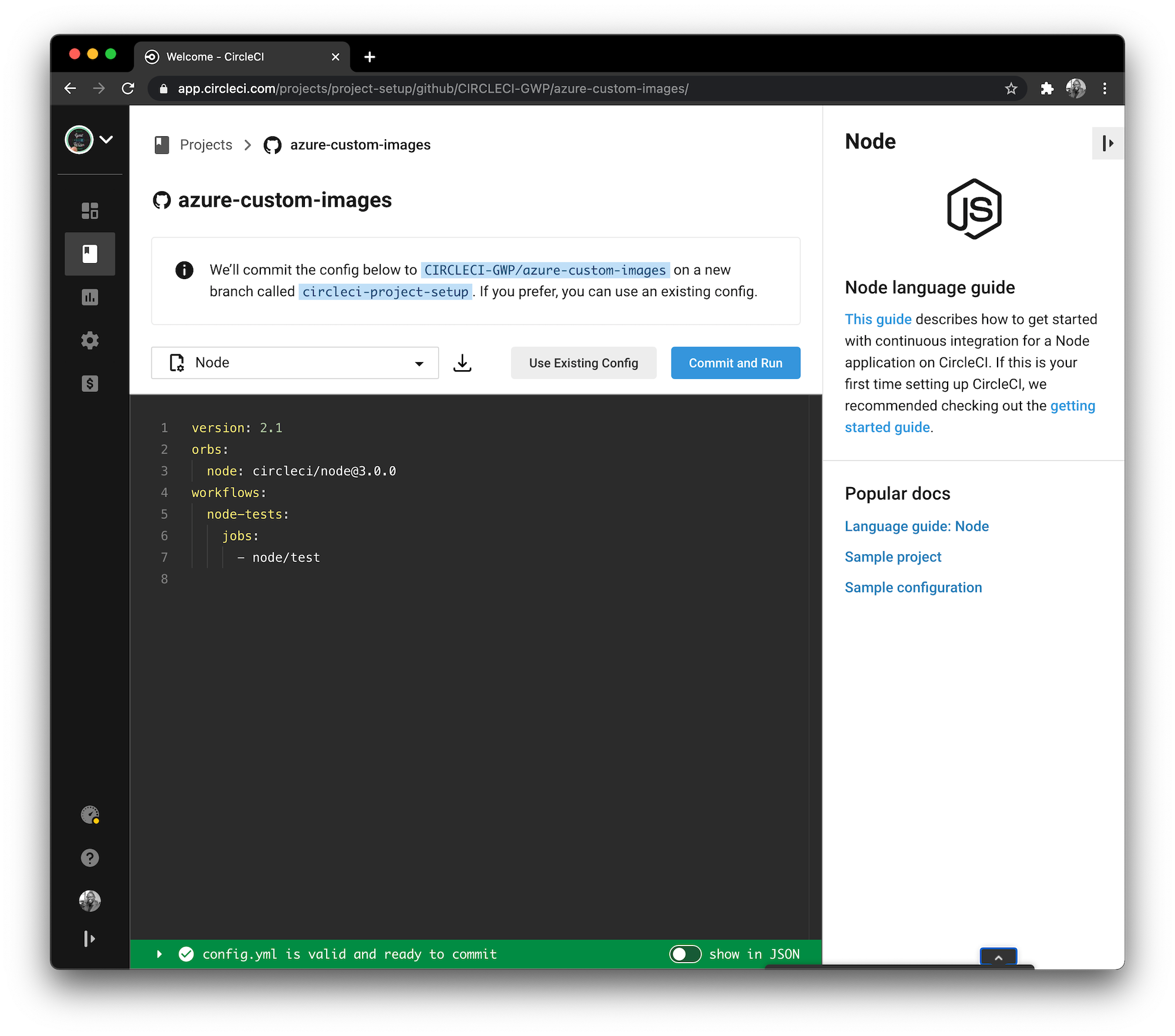 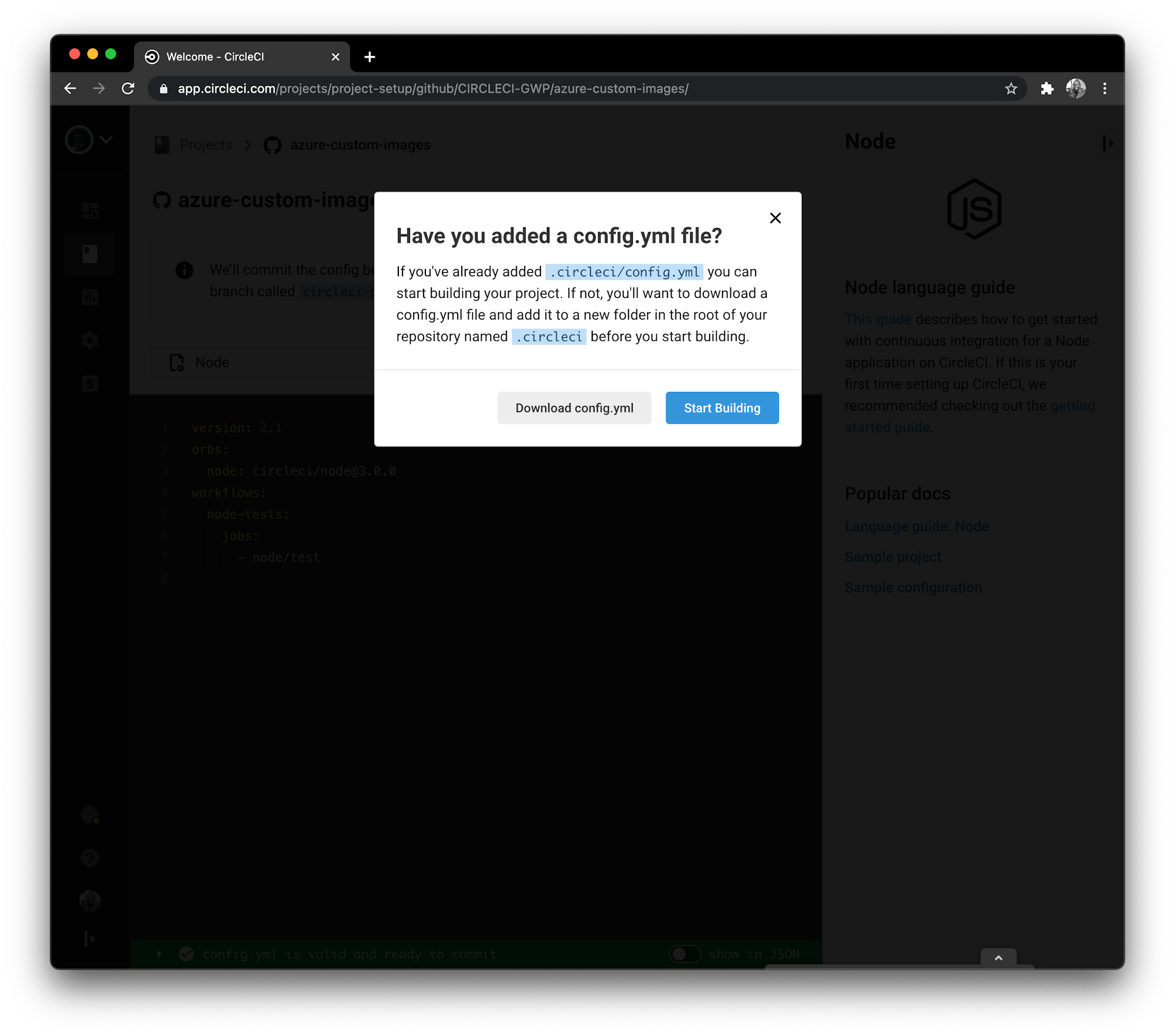 Click Start Building to initiate the build. This build will fail because you have not set up the configuration file yet. We will complete this task later in this tutorial.

Part of the continuous deployment strategy is to make a push to the buildimage branch from the pipeline configuration that will be written for this project, thus authenticated access is required for CircleCI to access the repository on GitHub.

Fortunately, CircleCI provides a way to add a User API Key to achieve that. On your project, go to Project Settings -> SSH Keys and go to the User Key section. Click the Authorize with GitHub button to make a connection to GitHub.

Once this is complete, an Add User Key button appears in the User API Key section. 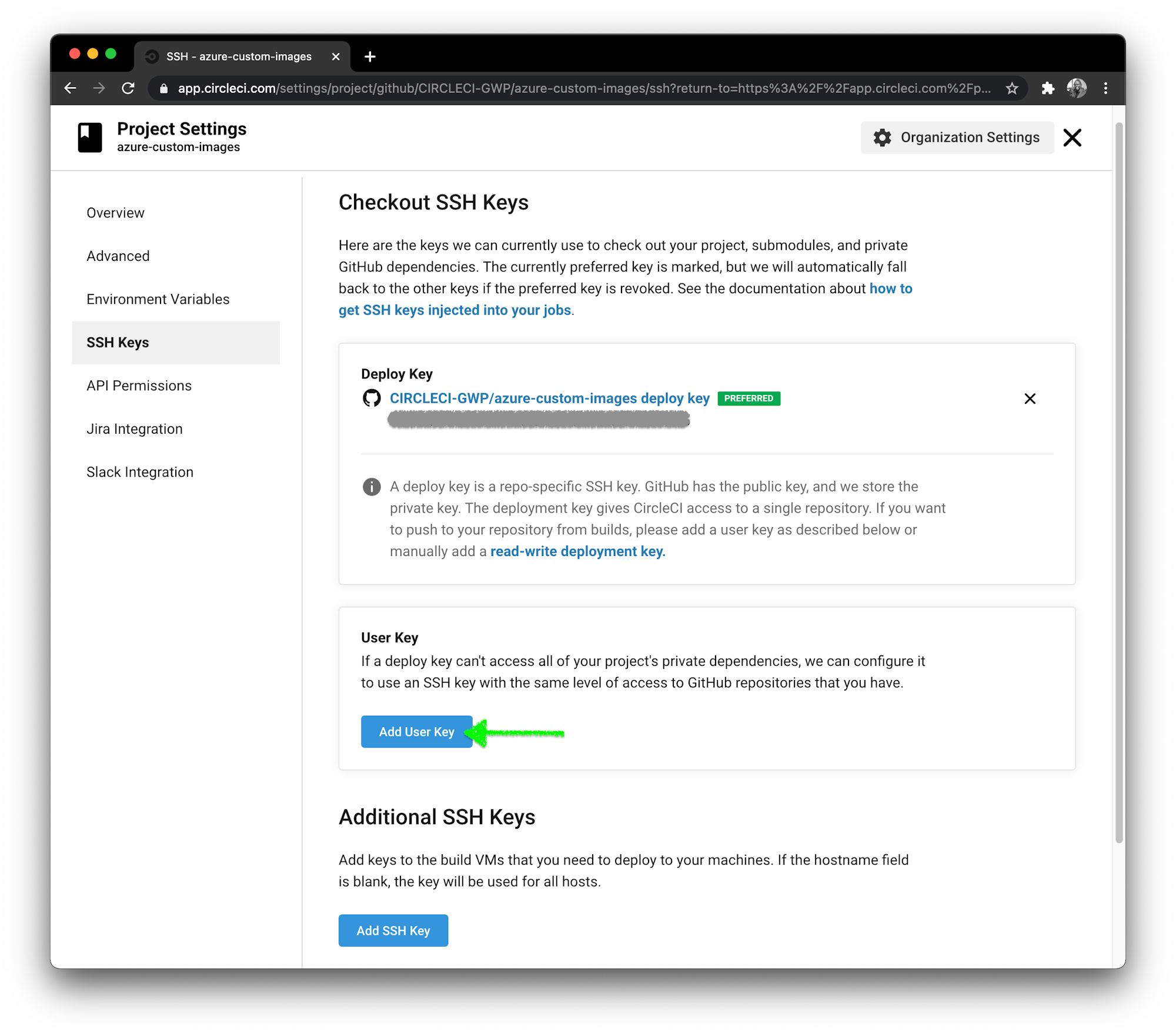 A fingerprint is generated which will be used later in the deployment pipeline. Copy the fingerprint, and keep it in a safe location.

Because the fingerprint will be used in the pipeline script along with your GitHub email and username, it is safe to put these in environment variables. On the side menu of your project settings click Environment Variables and add these:

The final task in this tutorial is to write the continuous deployment pipeline script for the custom docker image.

To enable the pipeline script to push updates to the buildimage branch of the GitHub repo, we will use the node package gh-pages. This package is configurable for pushing files from one branch to another in any given repository.

Install the package as a development dependency using the following command at the root of the project:

Next, add a pushtobuild script in the package.json file:

This script invokes gh-pages using npx to push files from the main branch to the buildimage branch. The --message parameter of [skip ci] Updates is added so that CircleCI does not re-run the pipeline when changes are pushed to this branch.

Now you can begin writing the pipeline script. At the root of your project, create a folder named .circleci and inside it, a file named config.yml. Inside config.yml, enter:

This file defines a workflow with two jobs.

The build job checks out the code from the remote repository, installs required dependencies, and runs the tests to ensure that no bugs are contained in the code. Once the build job is complete, the deploy job takes over and checks out a clean copy of the code (we do not want to push the node_modules folder from the previous job to the watched branch). It then configures access to GitHub to enable the pipeline script to push updates to the watched branch (buildimage). Finally, the deploy job runs the Node.js script to push updates and trigger a new build of the docker image.

When you commit your updates and push to the GitHub repository, you will have a successful workflow!

You can click on the build job to view the successful tests. 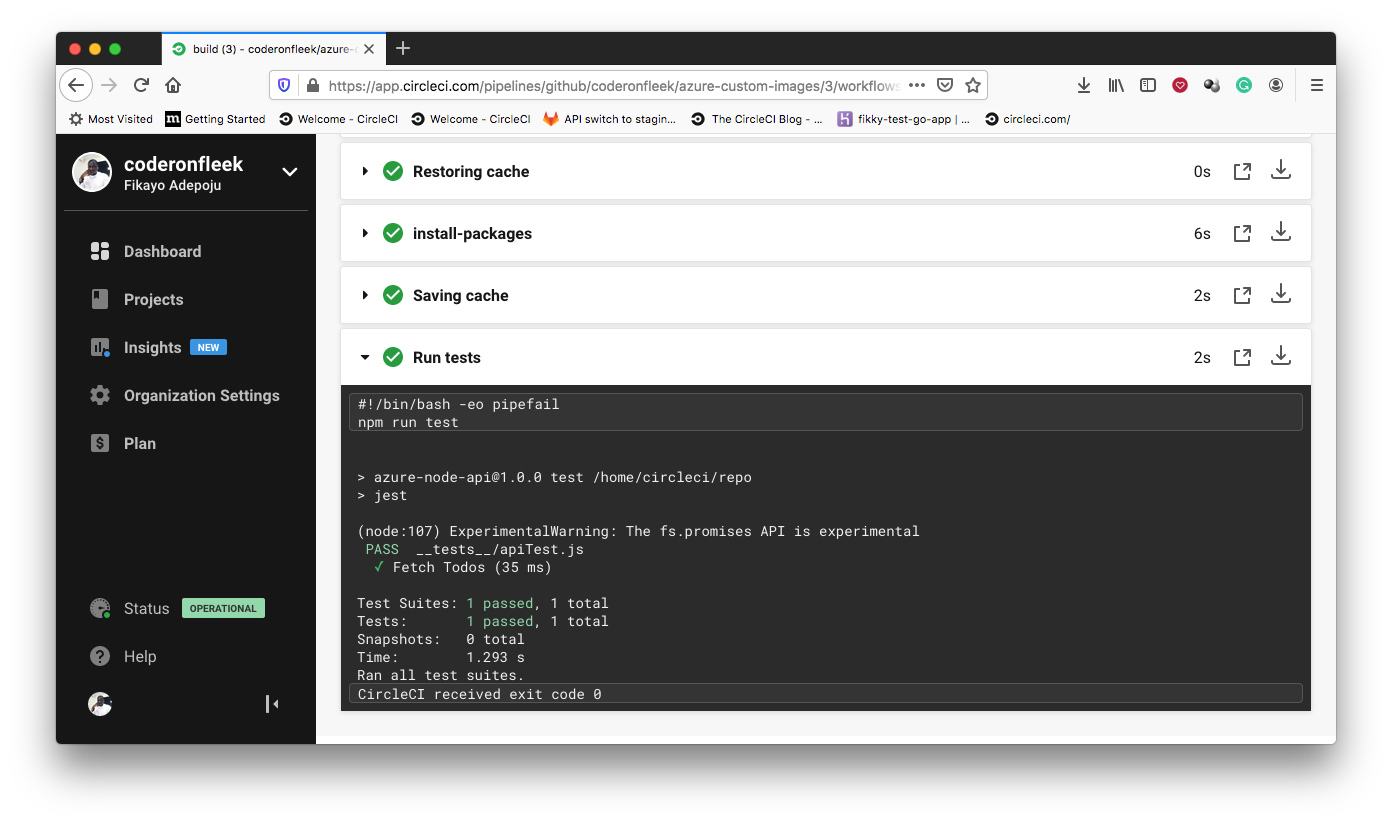 To see the details of the process, click the deploy job (in your browser, go back one page). 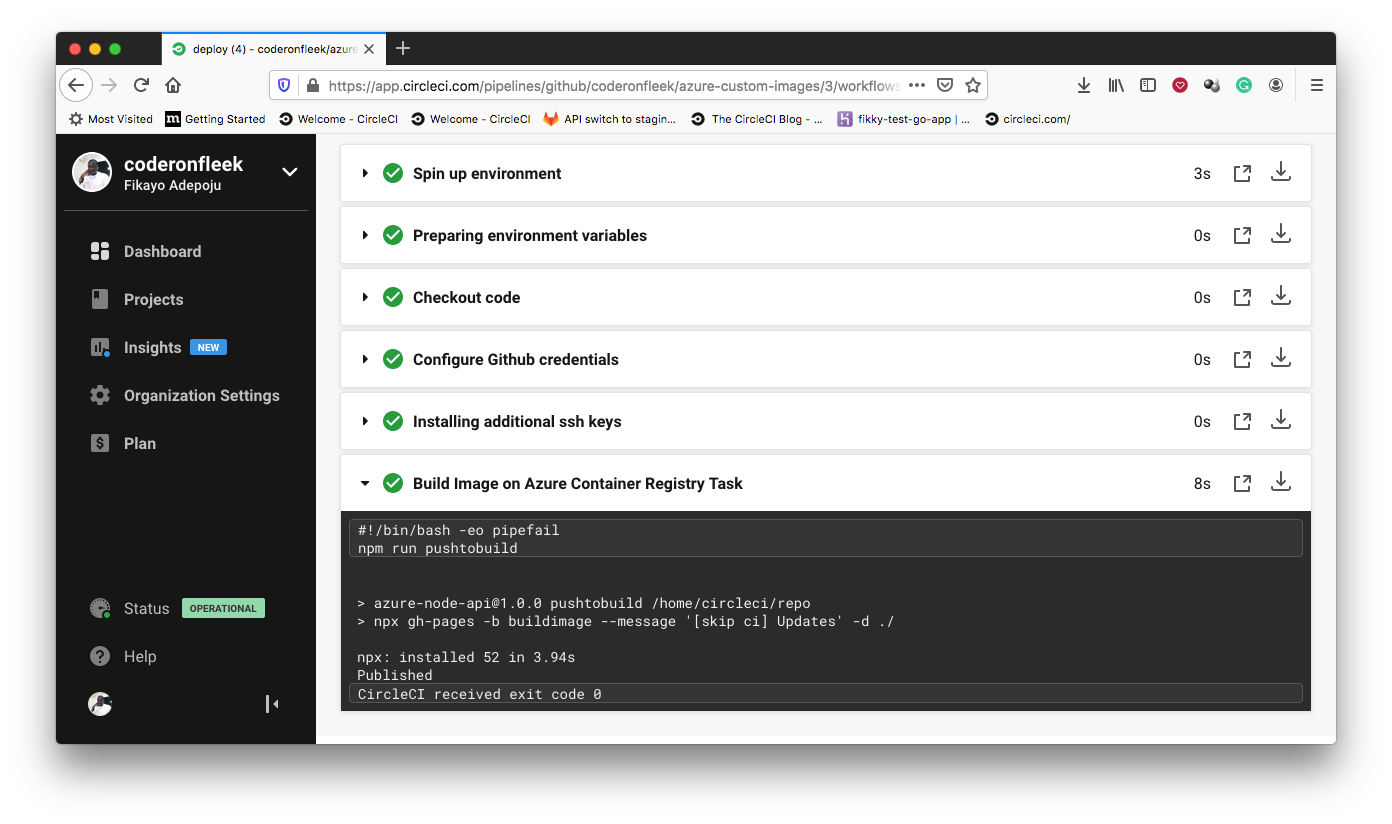 Go to your registry task at Services -> Tasks and click the Runs tab. You will see the build running.

After a while, the build will be complete and marked as Succeeded.

When you go to your image at Services -> Repositories and click the image, you will notice that the Last updated date has changed, indicating that the new build is now the most recent.

Azure Container Registry gives you the ability to store your container images, enabling fast and scalable retrieval of container workloads. In this tutorial, you have built a custom docker image and continuously deployed it to ACR each time your application code or Dockerfile changes. To get started applying what you have learned to your own work, sign up for your CircleCI free trial today.

Fikayo Adepoju is a full-stack developer, technical writer, and tech content creator proficient in Web and Mobile technologies and DevOps with over 10 years experience developing scalable distributed applications. With over 40 articles written for CircleCI, Twilio, Auth0, and The New Stack blogs, and also on his personal Medium page, he loves to share his knowledge to as many developers as would benefit from it. You can also check out his video courses on Udemy.