This tutorial covers these topics:

Nock is an HTTP server mocking and expectations library. You can use this library to test frontend modules that are performing HTTP requests. You can test in isolation because Nock lets you dictate what our API responses will be.

In this tutorial we will use an existing API todo application to test how it reacts to the backend APIs using Nock. Because this is a hosted application, you can focus just on the tests and not on developing the application itself.

To get the most from following the steps in this tutorial, you will need to have a few things in place:

The first step in this tutorial is to clone the test repository from GitHub.

Once you clone the repository, there is no need to set up the application. You can simply follow the tutorial while verifying the steps taken in the file todo.spec.js. This file is located in the application root of the cloned repository.

Why should I use mock testing?

Mock testing makes the process of running tests faster because you can eliminate dependencies on external systems and servers. Essentially, you “mock up” the backend application. Another benefit of using mocked dependencies is that you can test without causing a strain on external system resources like databases.

Note: Mock testing should always be used with other types of testing to provide the best test coverage. Good testing can increase confidence in the release process.

The first sample test should check how long it takes to make a request to an actual back end of a todo application. The request will give you an idea of how much time mocking can save, especially in the case of running tests that mock the back end.

The result shows the amount of time it took to execute the simple test and return the results. Because we are calling a real database we will return all the results rather than only the specific results that we need.

Here is a diagram that shows the simplified architecture of how this test runs without any kind of intervention from a mocked service.

Testing this architecture by setting up a test database to ensure that you get responses can be a headache. Instead, you can isolate all the backend dependencies and focus only on the frontend application. Then use the Nock mock service to intercept requests to the API backend and return custom responses.

This architecture diagram shows that what is returned is not from the API, but a custom response.

Setting up Git and pushing to CircleCI

To set up CircleCI, initialize a Git repository in your project by running the command:

Next, create a .gitignore file in the root directory. Inside the file add node_modules, to keep npm-generated modules from being added to your remote repository. The next step will be to add a commit and then push your project to GitHub.

Log into CircleCI and go to Projects. All the GitHub repositories associated with your GitHub username or your organization are listed. The specific repository that you want to set up in CircleCI for this tutorial is api-mock-testing-with-nock. 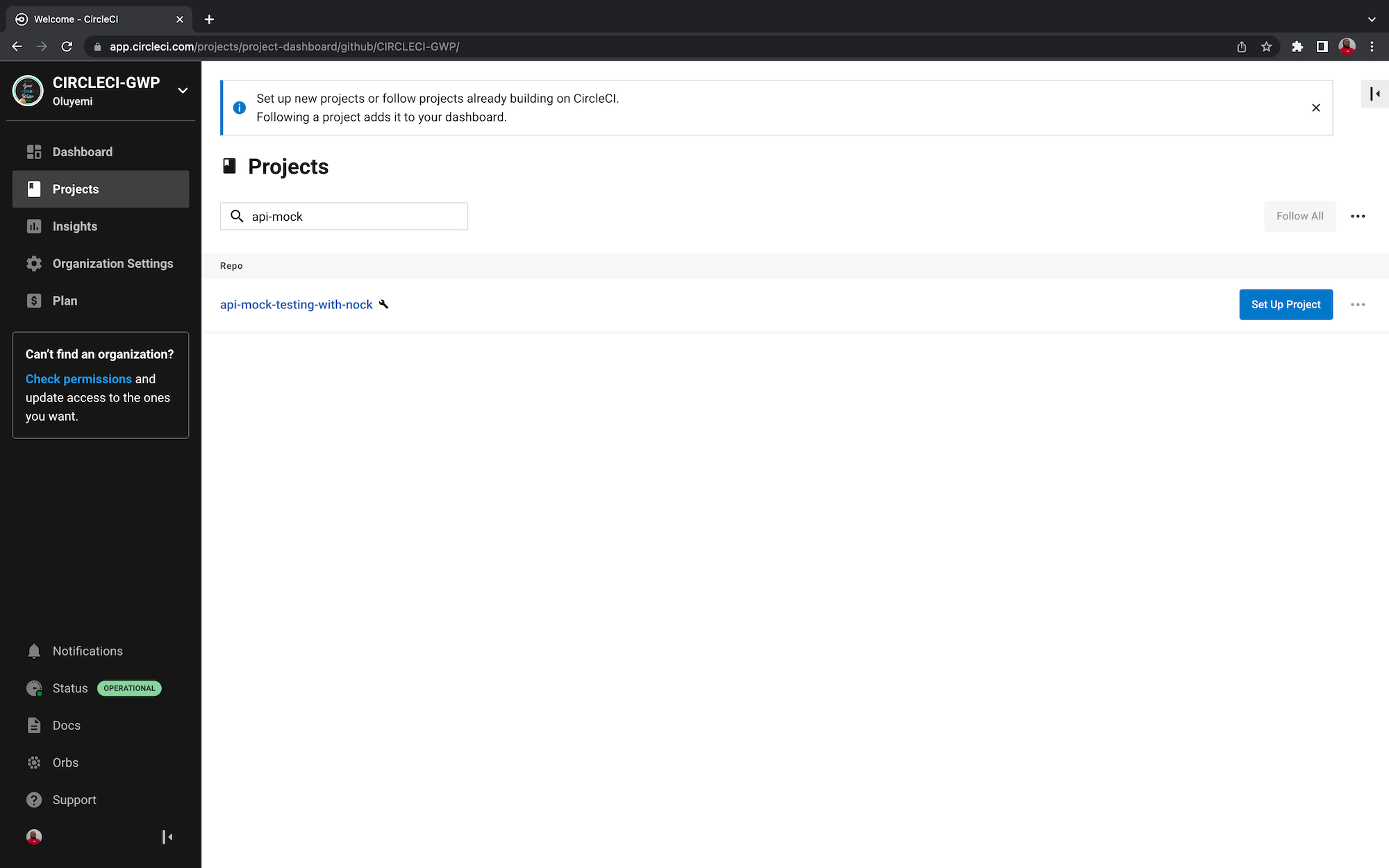 When prompted, click Start Building. The pipeline fails, which is as expected. You need to add the customized .circleci/config.yml configuration file to GitHub before the project will build properly. 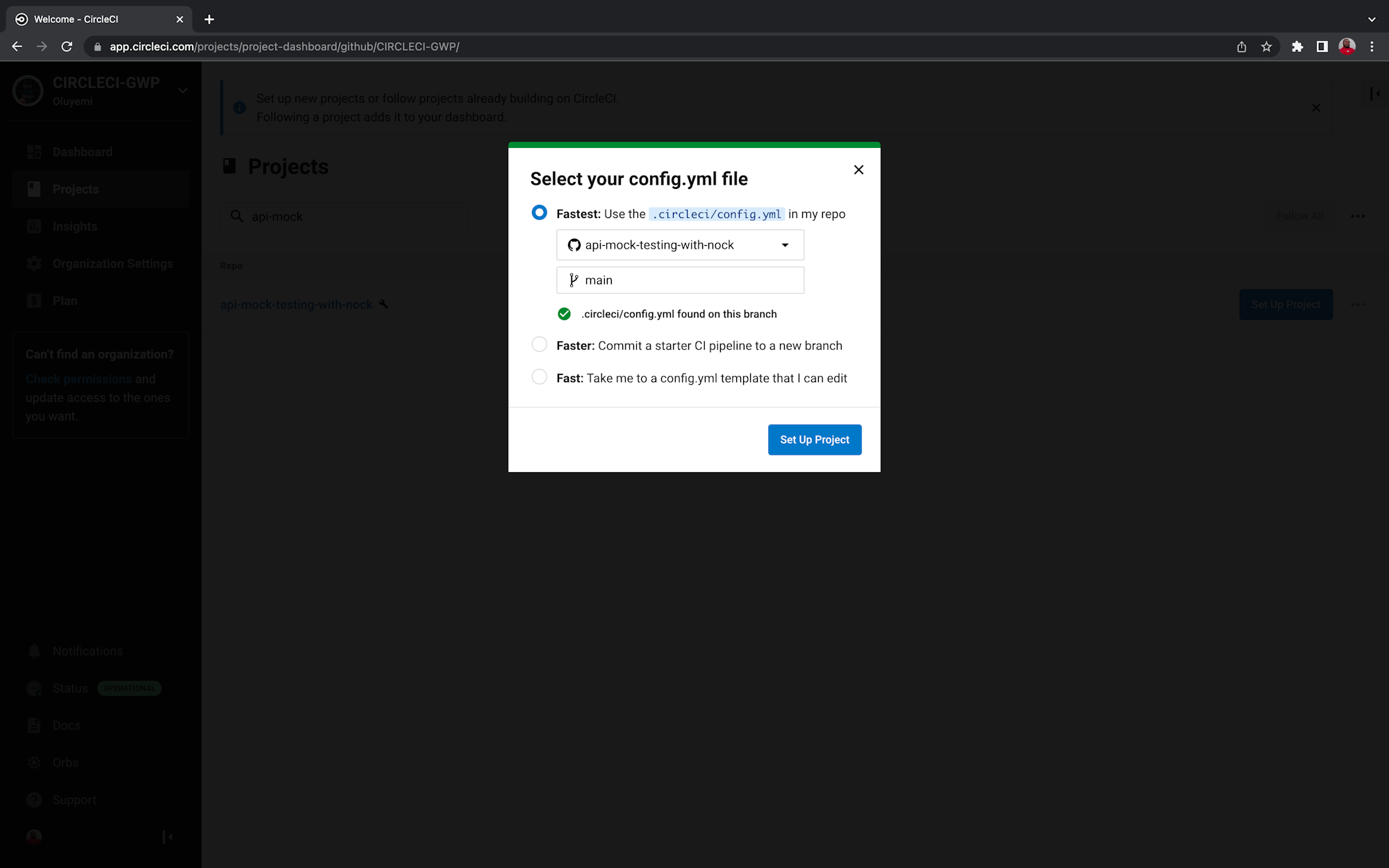 After setting up the CircleCI pipeline, it is time to add CircleCI to your local project. Start by creating a folder named .circleci in the root directory. Inside the folder, create a config.yml file. Now add configuration details:

In this configuration, CircleCI uses a node Docker image pulled from the environment and then updates the npm package manager. The next stage restores the cache (if it exists) and updates the application dependencies when a change has been detected with save-cache. Finally, it runs the api-mock-testing-with-nock tests and stores the cached items in the artifacts api-mock-testing-with-nock directory.

Pushing your changes to GitHub and CircleCI automatically starts the building process. Because there are no tests yet, your pipeline will fail (again). That is ok, because you will re-run this after adding the tests. Even without tests, details for the pipeline are available to review.

In this test, you will rewrite your earlier test mocking the API request that returns the responses for todo items. The test is in the cloned repository in the file todo.spec.js.

Nock intercepts any GET requests that are routed to the /todos/ endpoint. Instead of the test using the response from the API, Nock returns the response that was defined using the nock() method.

Note: Heroku free tier dynos sleep after 30 minutes of no activity. If the test fails, the dynos could be inactive and you may need to re-run the test.

When you check the run times for the test you should find that it is quicker to run the test using the mocked service than testing the real service. The mocked service runs in about 1.58 seconds. That is much better than the earlier request without a mocked service, which ran for about 3.59 seconds.

Running the new test shows clearly that mocked requests run faster, which can save your team significant time. That is especially true when multiple tests require calling the backend.

While mocked endpoints are useful to help you understand how your application interacts with the backend services, you may need to bypass the mocked requests in your tests. When you need to verify that you get proper responses from the endpoints when making HTTP requests to the backend service, you must bypass mocking.

The next sample test uses the Nock enableNetConnect method to define links that can be bypassed when mocking our tests. A good example would be to enable connection to the localhost URL and mock with the hosted URL just to verify that everything is working correctly. You can find this test in the cloned repository in the file todo.spec.js.

The backend test for creating todo items specifies the regex for the URL to be bypassed. It then makes a later request to that URL. The second request is to make sure that the application actually creates a todo item when you make a request to the remote URL.

It is important to clear mocks after running each test. You will also want to enable any blocked HTTP requests. Clearing mocks and blocks keeps them from interfering with subsequent tests, and allows the other tests to make HTTP requests.

To clear mocks after running tests, enter this code in the afterEach section of the tests:

Now that the tests are working and the CI pipeline is set up, you can add all the files to git and push them to GitHub remote repository. Our CircleCI pipeline should kick in and run our tests automatically. To observe the pipeline execution, go to the CircleCI dashboard and click the project name: (api-mock-testing-with-nock).

To review the build status, select the build from the CircleCI dashboard. You will be able to review the status of every step as defined in your CircleCI configuration file. 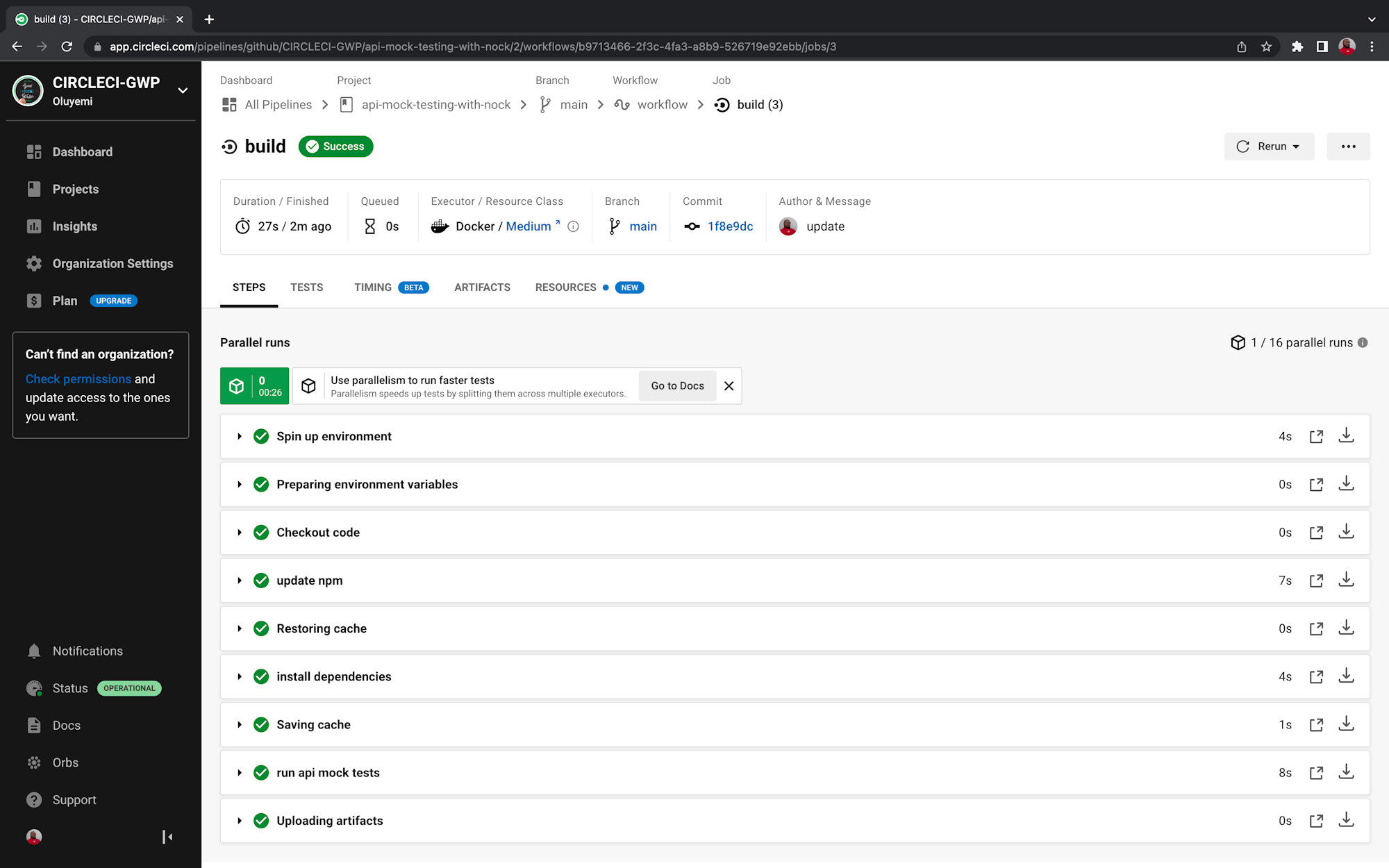 To observe the pipeline execution, go to the CircleCI dashboard and click the project name: (api-mock-testing-with-nock).

To review the build status, select the build from the CircleCI dashboard. You will be able to review the status of every step as defined in your CircleCI configuration file. 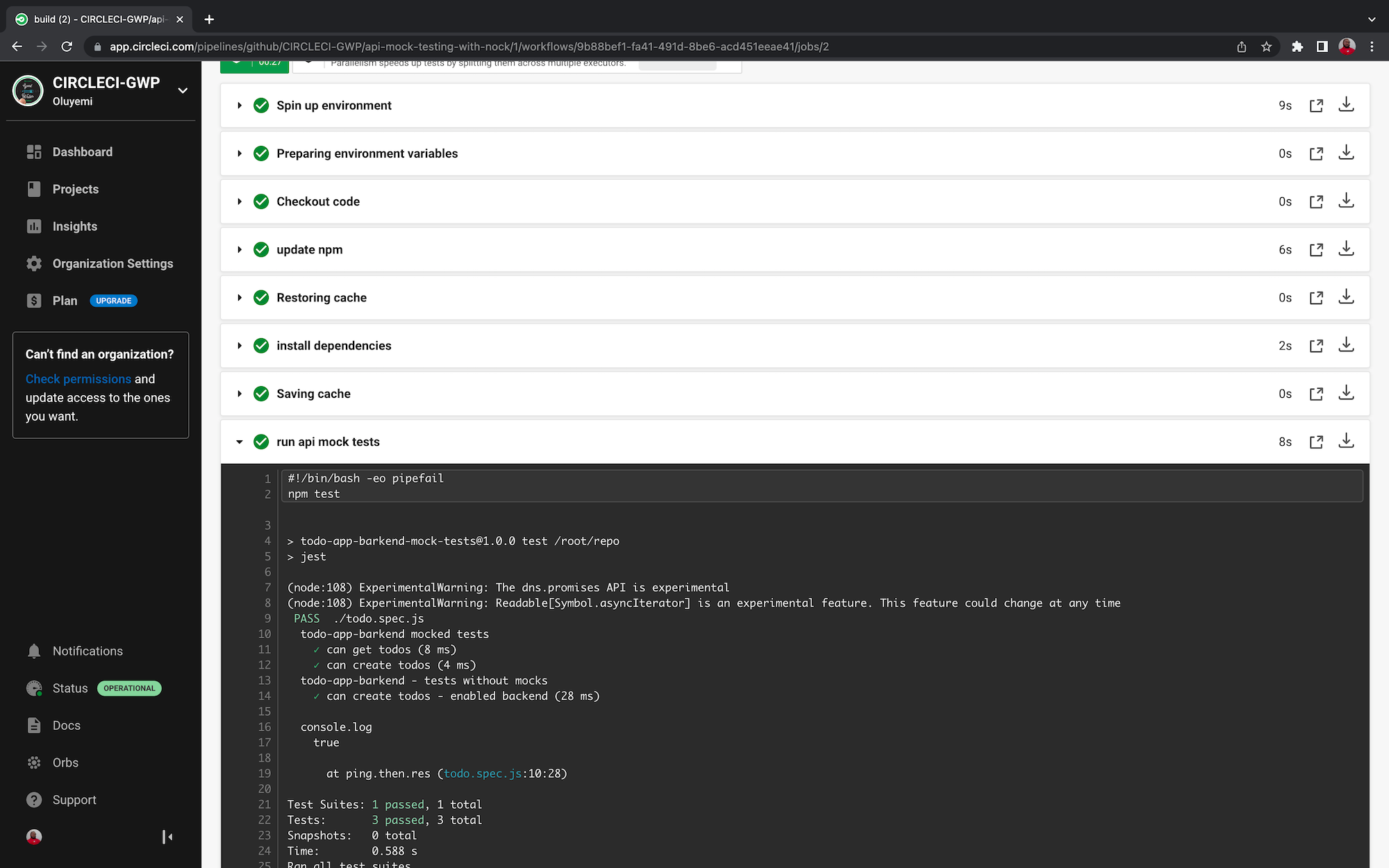 Fantastic! We have a green build.

In this tutorial I have shown you what API mocking is and how useful it can be. We used Nock to mock HTTP requests in our tests and showed how mocking can reduce the time it takes for tests to execute. You have learned how to test only the behavior of the application in isolation, without involving external dependencies.

You practiced running tests with mocks and learned the value of clearing mocks and when to do so. Armed with this knowledge, you and your team are in a better position to test APIs without calling them for responses. Happy (faster) testing!