JavaScript Immediately Invoked Function Expressions (IIFEs) are functions that are executed when they are initialized. An IIFE (pronounced “iffy”) can be initialized or defined to achieve a certain purpose. In this tutorial, you will learn about use cases for IIFEs and the benefits of using them over traditional functions. You will also write tests for your functions and integrate CI/CD for these tests.

What is an IIFE?

An IIFE (Immediately Invoked Function Expression) is a function that runs the moment it is invoked or called in the JavaScript event loop.

Having a function that behaves that way can be useful in certain situations.

For example, the library jQuery has the object $. If you have another module that also imports this object, you may run into some confusion and errors. An IIFE eliminates those errors. You can use an IIFE to create a scope for only jQuery and its methods.

Another benefit of using IIFEs is performing asynchronous operations such as the setTimeout() method. You will have a chance to use this later in the tutorial in the section about closures.

IIFEs can also be used to create private variables. These variables are useful in cases where you may need to prevent accidental modifications or changes to important values. 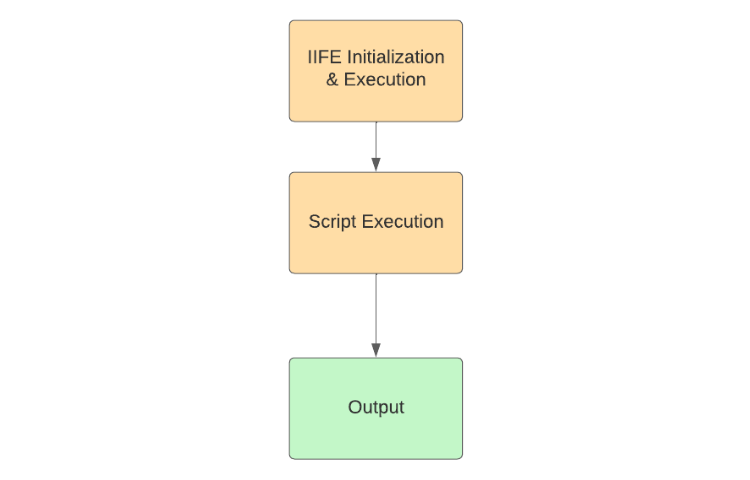 Setting up the application

Clone the repository for the tutorial. It contains the code you will be using in your preferred location. Open a terminal and run this command:

After cloning the repository change the directory to the project directory by running:

You will also need to install the required dependencies by running this command:

IIFEs can be used for different purposes. One of the main uses of these functions is declaring global variables.

This code snippet shows how IIFE can be used for global variable declaration:

By using jQuery this way, you have access to the $ object. Any code inside the IIFE that uses the object will only refer to jQuery. This object then gives us access to jQuery functions without cluttering the global namespace.

It is also important to understand that IIFEs are functions themselves. The only difference is that they do not need to wait for invocation. On further investigation, you can see that in this snippet:

One thing to be careful with is variables that are not closed off or that JavaScript deems to not have been closed off. You may run into errors if you omit semicolons, especially in applications using IIFEs. Here is an example:

If you run this, you will get an error.

For unterminated statements like variables, Automatic Semicolon Insertion (ASI) and bundlers like webpack will prevent these types of errors. However, they don’t work for all cases, including IIFEs. You can bypass this by either adding a semicolon at the end of the statement or at the beginning of the IIFE. This code snippet executes without errors because you closed off the variable:

You can name your IIFEs or leave them anonymous. Be aware that naming them does not mean that they will be invoked after they are executed. Naming can be useful especially if you have several IIFEs that perform different operations close to each other. This code snippet shows an example of a named IIFE:

This function is named IIFE, which does not give it an advantage over an unnamed IIFE. An unnamed IIFE has no function names and only the function keyword. Here is the structure of an anonymous IIFE:

The syntax is similar to JavaScript’s anonymous functions. You can also use the arrow function variation:

Another important use of IIFEs is closures. Closures are the ability of a function to utilize variables or other information outside its local scope. For instance, the function from the previous snippet displayed the greeting even though its value is defined outside the function. This example shows how IIFEs work with closures:

In this code snippet, you define the IIFE and store it in a variable, friendlyFunction. As mentioned earlier, IIFEs are executed when they are defined. In this case though, the inner function is not executed until friendlyFunction() is called. If you comment out the function calls at the bottom, there will be no output on the console.

The greetCount variable is private and accessible only in the IIFE. When invoking the function severally, the value of greetCount variable is persisted and incremented with each call. Without closure, the value would always be 0. Closures in IIFEs, therefore, ensure that the global namespace is not polluted even if you decide to name your IIFE variables using the names of variables that exist in the global scope.

The previous section described some of the ways that IIFEs can be useful. That list cannot be complete without writing tests and integrating them with CI/CD. In this case, CircleCI.

To do this you first need to write tests for your IIFE functions. You will use Jest which is a JavaScript test framework.

Under users.js in the cloned repository, you have this asynchronous IIFE that gets users from a free API. Here is what you will use for this section:

This IIFE returns an array containing 10 users. You can use the data from this array to write tests to make sure you get the correct array of users:

This code snippet has a test suite that uses Jest to ensure that the data you receive is as expected. This code can be found in the app.test.js file. Run this test file locally:

If your assertions are correct, the tests should pass as shown here:

CircleCI is a CI/CD tool that helps automate your workflows and run your tests.

CircleCI creates a virtual environment for pipeline execution. In this code snippet, we are installing necessary dependencies, saving the cache for faster builds, and then executing your tests.

Save your local changes, commit and push them to GitHub. Sign in to your CircleCI account. From the Projects tab, click Set Up Project next to the name of your remote repository. 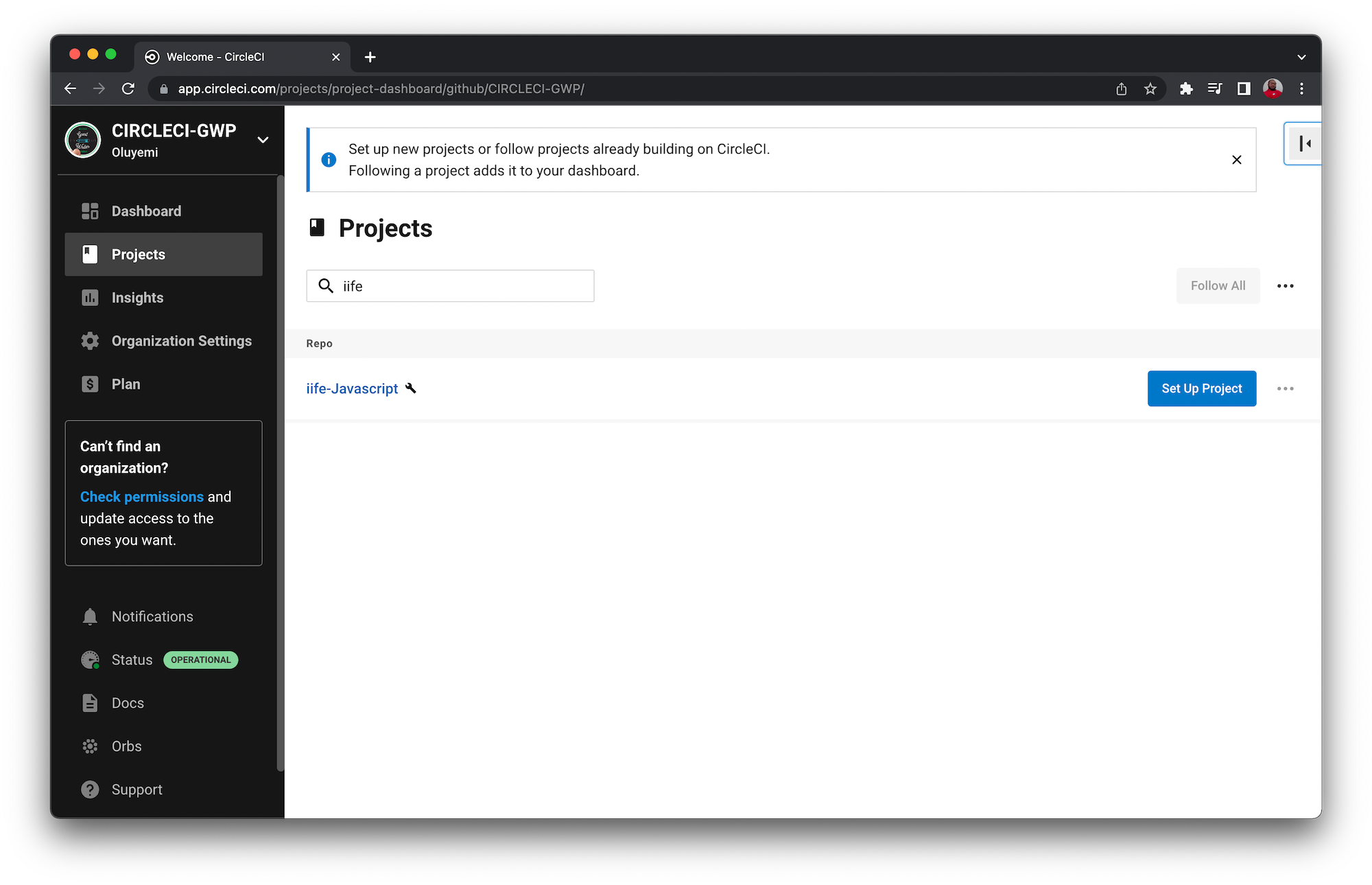 On the popup, select Fastest, then click Set Up Project. 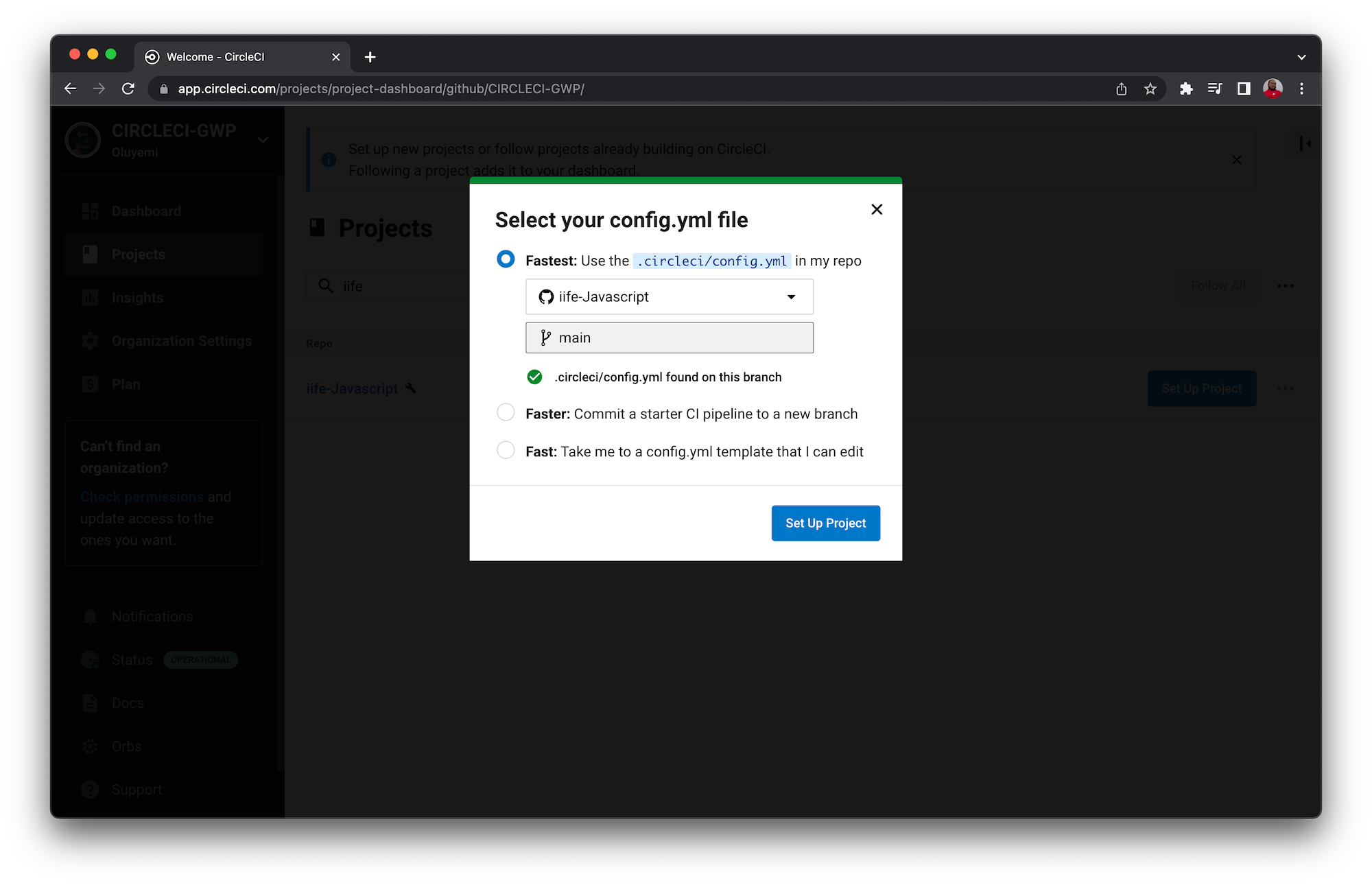 CircleCI will then run the build job and it should succeed. 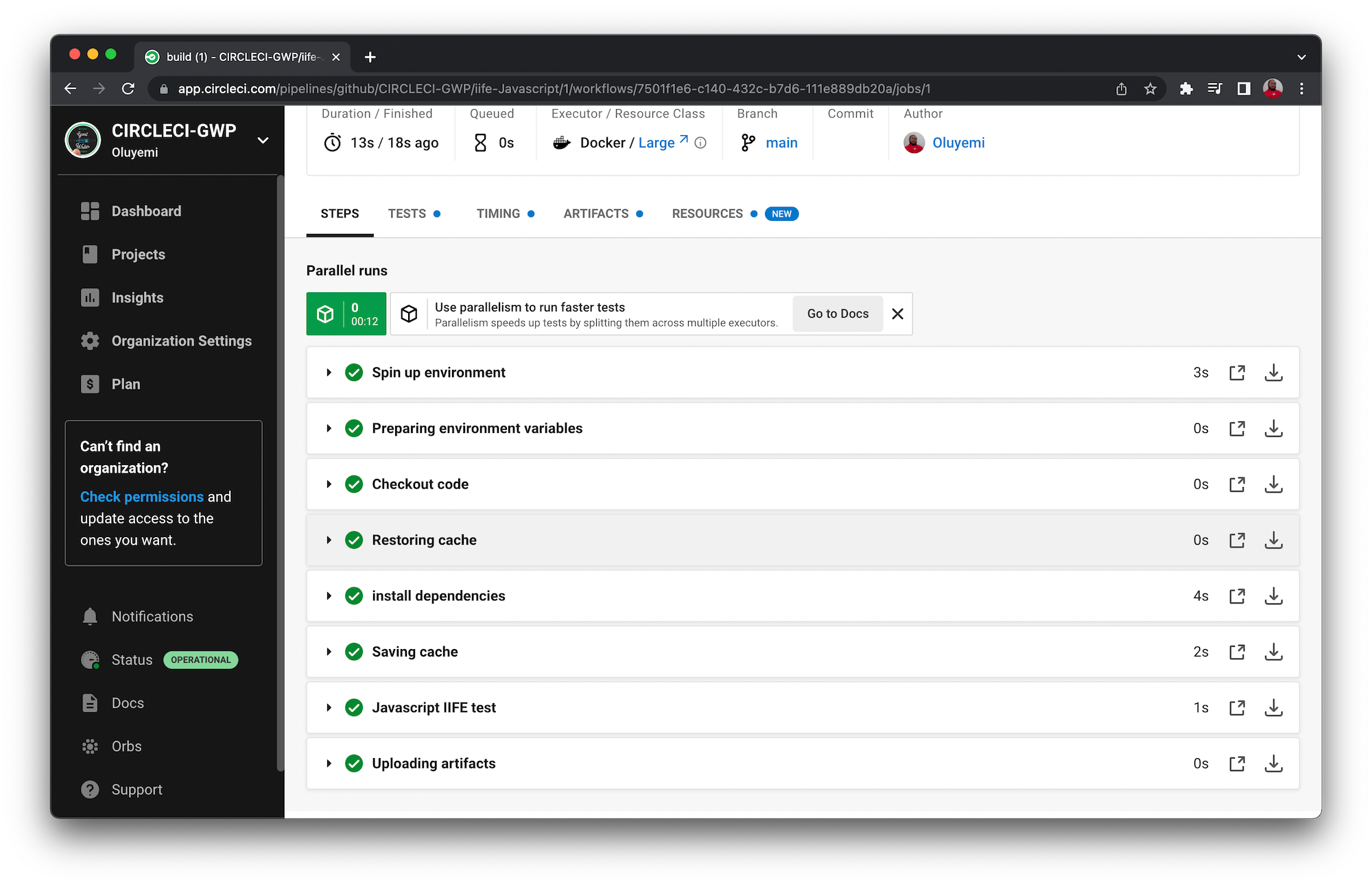 In this tutorial, you have learned how JavaScript Immediately Invoked Function Expressions (IIFEs) can lead to faster workflows because of immediate invocations. You also learned about the different use cases for IIFEs and some of the problems they solve. Finally, you wrote tests and integrated CircleCI. I hope you enjoyed reading this tutorial and until the next one, keep learning!