GraphQL continues to grow in popularity with each passing day, since its public release by Facebook in 2015. The technology enables front end clients to query exactly what they need from the backend, and is gaining wide recognition and adoption by reputable companies such as Pinterest, Coursera, Airbnb, and Facebook itself.

In this post, we will learn how to deploy a simple GraphQL server written in Node.js to Heroku via a continuous integration (CI) pipeline using CircleCI.

##Scaffolding the GraphQL server project To begin setting up a GraphQL server, create a new folder for the project by running the following command:

Now go into the root of the folder and run the following command to scaffold a new Node.js project:

The -y optional flag allows you to skip confirming the default answers to the questions for creating the package.json file and just accepts them.

We are going to create an ExpressJS Node.js application and build the GraphQL server. To do this, we need to install the following packages:

Install these packages by running the following command:

We now have the required packages to start putting together our GraphQL server.

Create a folder named src at the root of your project by running the following command:

Within this folder, create a new file with the name schema.js and paste in the code below.

In the above code, we have created four types, consisting of two built-in types (Query and Mutation) and two custom types (User and Post).

Beginning with the custom types, we defined the following:

The schema is created using the buildSchema of the graphql package and exported at the end of the file.

In order to have results for our queries, we need data. For this exercise, we will be using MongoDB.

However, since the goal of this post is to demonstrate deploying a simple GraphQL server, we won’t bother with setting up a MongoDB server. Instead, we will use a mocked version using the mongodb-memory-server. This package allows us to create and use an in-memory MongoDB database server.

To set this up, install the required packages by running the following command at the root of your project:

This installation might take a while, depending on your download speed. MongoDB was at least 66 megabytes in size at the time of this writing.

Once the installation is complete, create a new file named data.js in the src folder. This file will export an array of hard-coded user data. Paste the following code below into the file.

In the code above, we have an array of user objects with their corresponding posts. This information will be used to seed our in-memory database once it is instantiated.

The next task is to set up our mock MongoDB database server. In the src folder, create a new file named database.js and insert the following code into the file.

With the connection to the database, we seed it with our user data exported from our data.js file. A check is made to see if the database reference is null before seeding it with data, in order to keep the data from being entered into the database each time the application starts up.

Create a new file in the src folder named resolvers.js and paste in the following code.

As seen above, we now have resolvers for the three GraphQL requests available on our server. These resolvers fetch and update data using the database reference we created earlier by referencing it from the context object of the GraphQL server.

This reference will be added to the context object of our GraphQL server setup in the next section when we put everything together.

Setting up the GraphQL server

It is time to put every component we built together to set up our GraphQL server.

Before we begin, we need to install one more package. The graphql package comes with the GraphiQL application, which allows you to query your GraphQL endpoint, but let’s add a tool that is more robust. We will install the graphql-playground-middleware-express package to give us a fancier interface for querying our GraphQL endpoint.

Run the following code to install the package:

We will use this middleware to set up the GraphQL Playground for querying our server.

Let’s set up our server by creating a file named index.js at the root of the project and placing the following code in it.

In the file above, we start by importing all necessary modules. Then, we create our GraphQL context and return an object from it containing the reference to our MongoDB instance. Next, we create our ExpressJS application and set up the express-graphql middleware with GraphQL schema, resolvers, and context. We then set up the GraphQL Playground at the route /playground to load our GraphQL endpoint. Finally, we start our ExpressJS server to listen at port 4000 and print a message to the console.

Now that we have our server set up, let’s take it for a spin. First, let’s create a start script in package.json to boot up our server.

Add the following script to the scripts section of the package.json file.

Run npm start to boot up the server.

Once the server is up and running, open up your browser and visit http://localhost:4000/playground to open up the playground. You will see a screen similar to the one below. 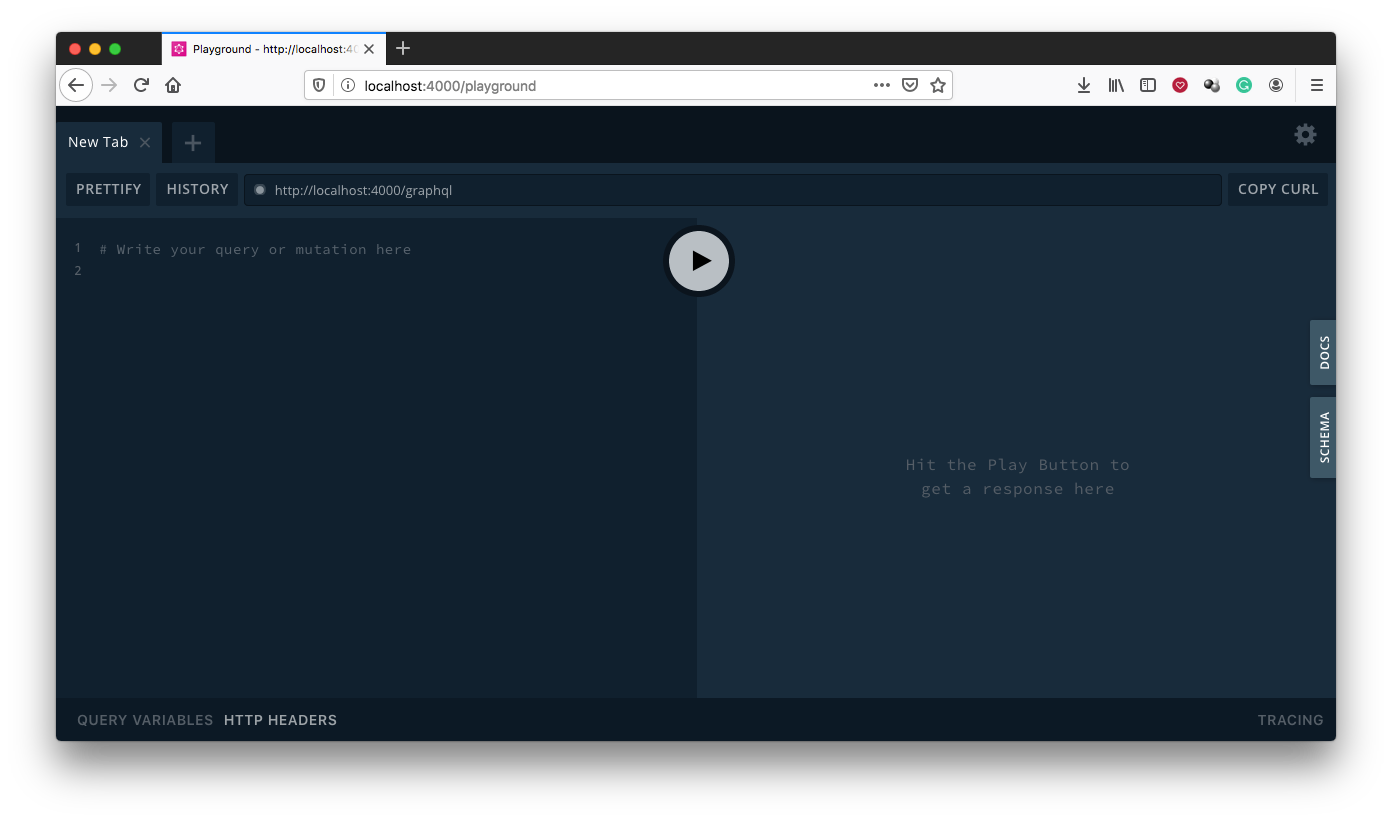 The playground automatically points to our GraphQL endpoint. From here we can write queries against our endpoint and get the results. Paste the query below into the query section of the playground and hit Play to run it:

Running the above query will produce the result shown on the screen below. 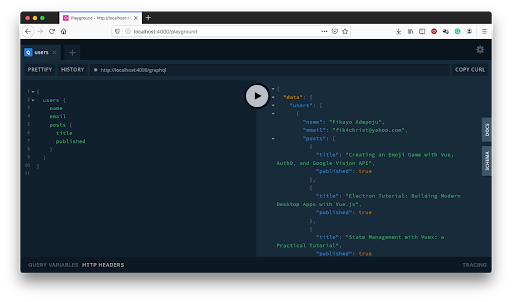 As seen above, our GraphQL server is working fine and returning the expected data.

Deploying to Heroku with CircleCI

Our final task is to deploy our GraphQL server through a CI pipeline with CircleCI on the Heroku hosting platform.

We are going to take the following steps to deploy our GraphQL server:

Let’s begin. First, push the project to a GitHub repo.

Next, create a Heroku application as shown below. The name you enter is the name you will save as your Heroku app name on CircleCI. 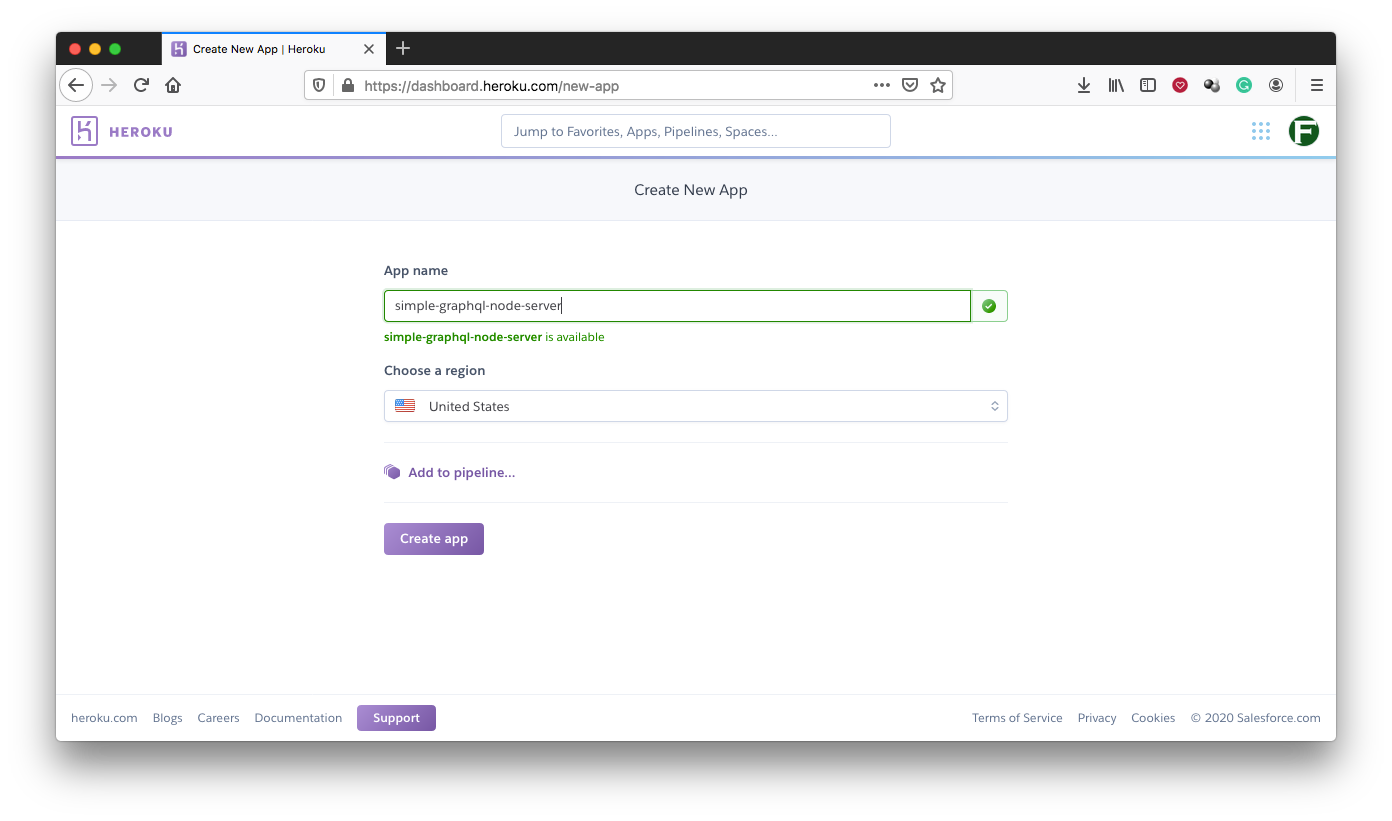 You can get your Heroku API key by going to Account Settings and scrolling down to the API Key section.

The next step to deploying our application to Heroku is to connect the application on our GitHub repository to CircleCI.

Head to your CircleCI dashboard and add the project in the Add Project section. 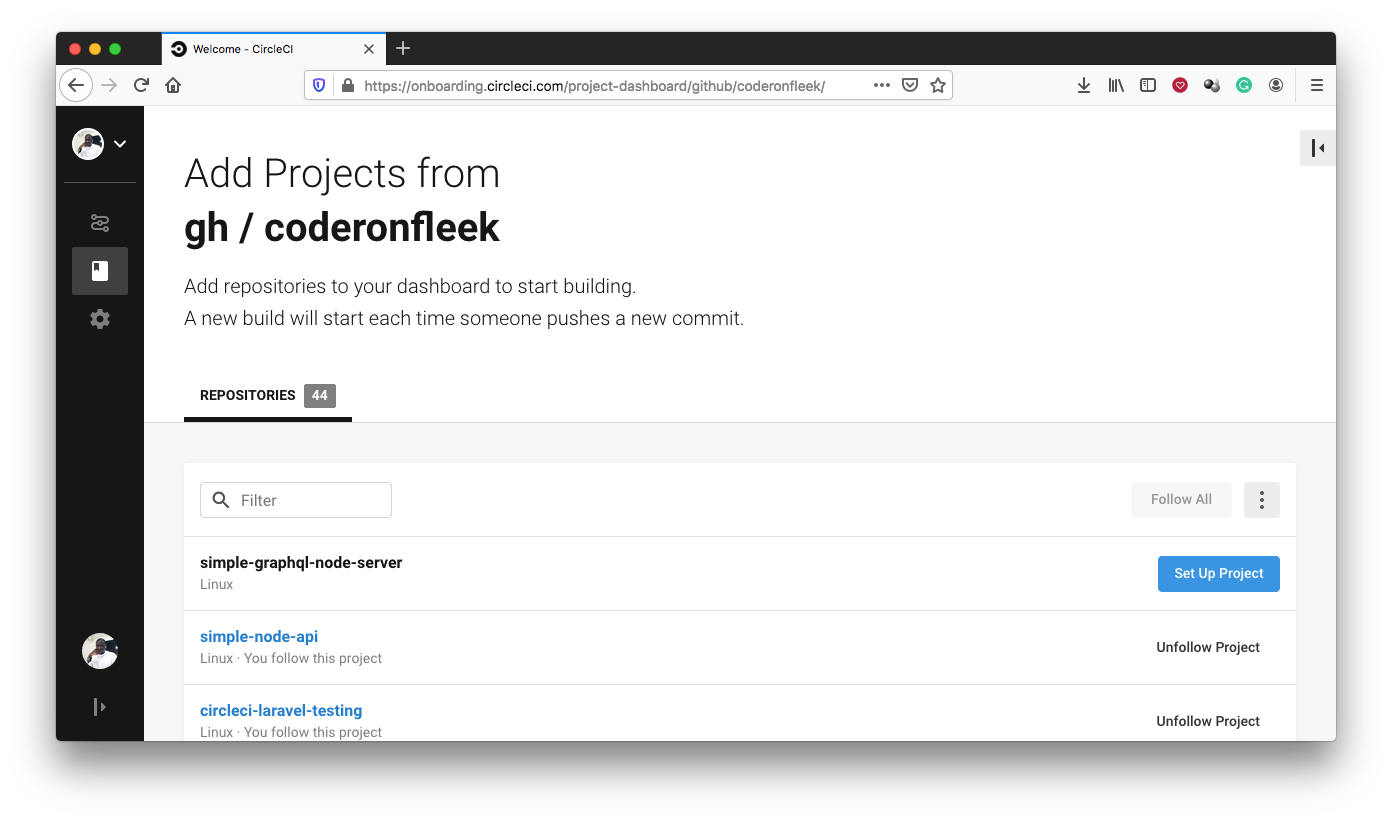 Next to set up your project (in this case simple-graphql-node-server), click Set Up Project. This will bring you to a page similar to the one below. 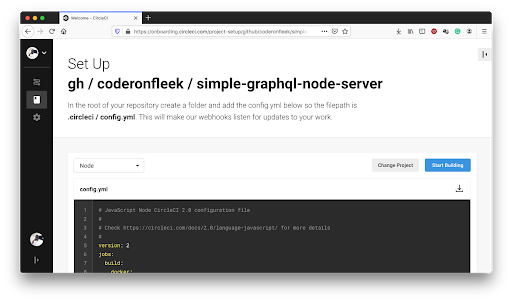 To add these details, head over to your CircleCI dashboard and click Settings for your project. On the sidebar menu on the settings page, click Environment Variables under Build Settings.

Create a folder with the name .circleci at the root of your project and create a config.yml file inside it. Add the following configuration.

The code above uses CircleCI’s Heroku orb to perform a seamless deployment to Heroku. An orb is a reusable package of a YAML configuration that condenses repeated pieces of config into a single line of code. This one makes it very easy to deploy to Heroku without writing a sophisticated config yourself.

Save this file and push your changes to the GitHub repository. Then watch your CircleCI dashboard trigger a deployment after the successful push. You will see a successful deployment on your dashboard similar to the screen below. 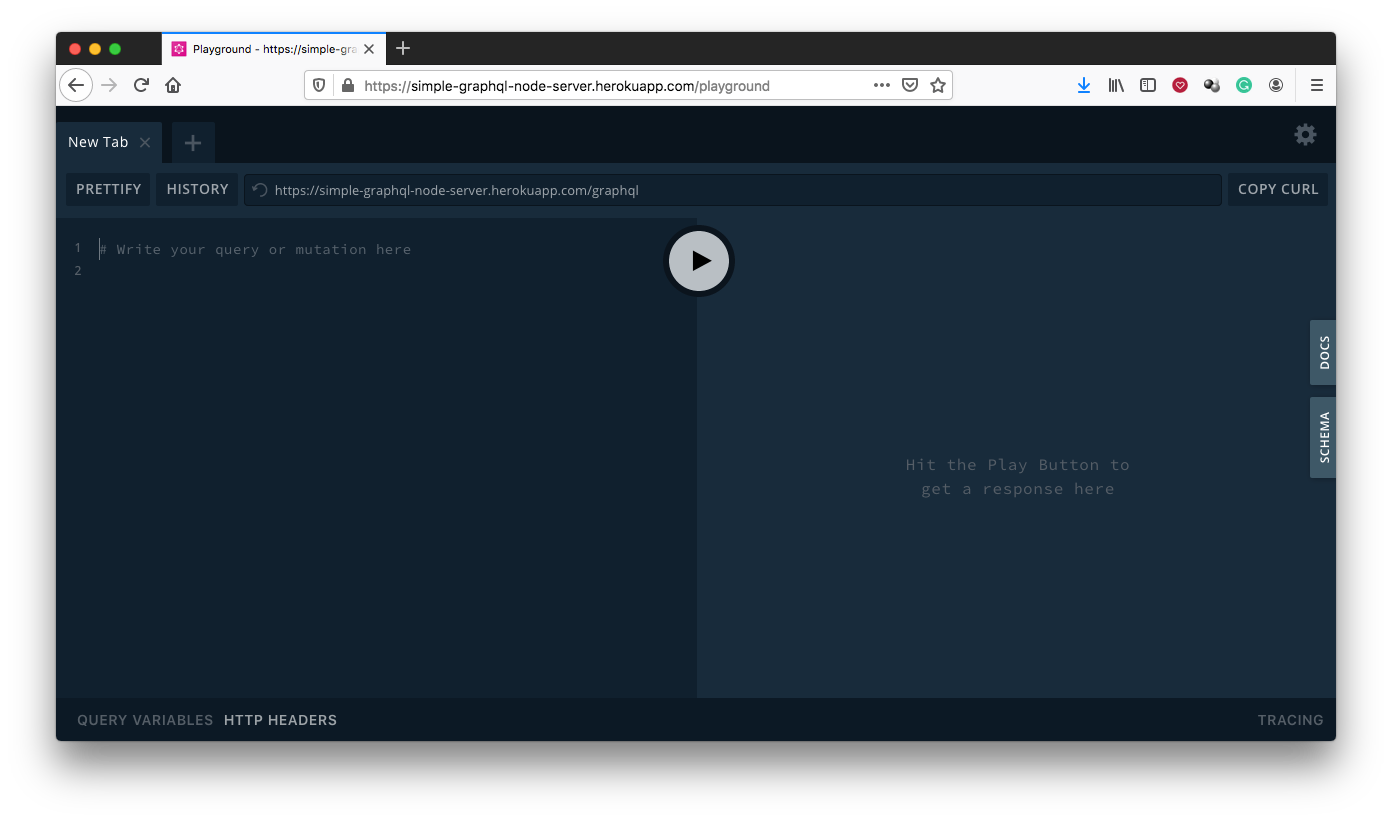 In this article, we have been able to successfully put together a simple GraphQL server and automate its deployment using CircleCI. GraphQL is here to stay and is expected to gain more adoption, since its many benefits make it worthy of increased use.