Development teams provisioning software services face a constant trade-off between speed and accuracy. New features should be made available in the least possible time with a high amount of accuracy, meaning no downtime. Unforeseen downtime due to human error is common for any manual integration processes your team uses to manage codebases. This kind of unexpected interruption can be one of the key drivers for a team to take on the challenge of automating their integration process.

Continuous Integration (CI) occupies a sweet spot between speed and accuracy where features are made available as soon as possible. If a problem with the new code causes the build to fail, the contaminated build is not made available to the customer. The result is that the customer experiences no downtime.

In this article, I will use CircleCI to demonstrate how CI can be applied to a Deno project. In a companion tutorial, you can learn how to deploy your Deno project to Heroku.

Deno is a simple, modern, and secure runtime for JavaScript and TypeScript. Using Deno gives you these advantages when you create a project:

The sample project for this tutorial will be an API built with Oak. This API has one endpoint which returns a list of quiz questions. A test case will be written for the endpoint using SuperOak.

Before you start, make sure these items are installed on your system:

For repository management and continuous integration, you need:

Create a new directory to hold all the project files:

To keep things simple, you can import a hard-coded array of questions in our project. Create a file named questions.ts and add this:

Setting up a Deno server

In this section, we will use the Oak middleware framework to set up our Deno server. It is a framework for Deno’s HTTP server. It is comparable to Koa and Express. To begin, create a file named server.ts and add this code to it:

In this example, we are using the Application and Router modules imported from the Oak framework to create a new application that listens to requests on port 8000. Then we declare a route that returns a JSON response containing the questions stored in questions.ts. We also add an event listener to be triggered every time an error occurs. This will be helpful if you need to debug when there is an error.

We can run the application to see what has been done so far using this command:

Navigate to http://localhost:8000/ to review the response. 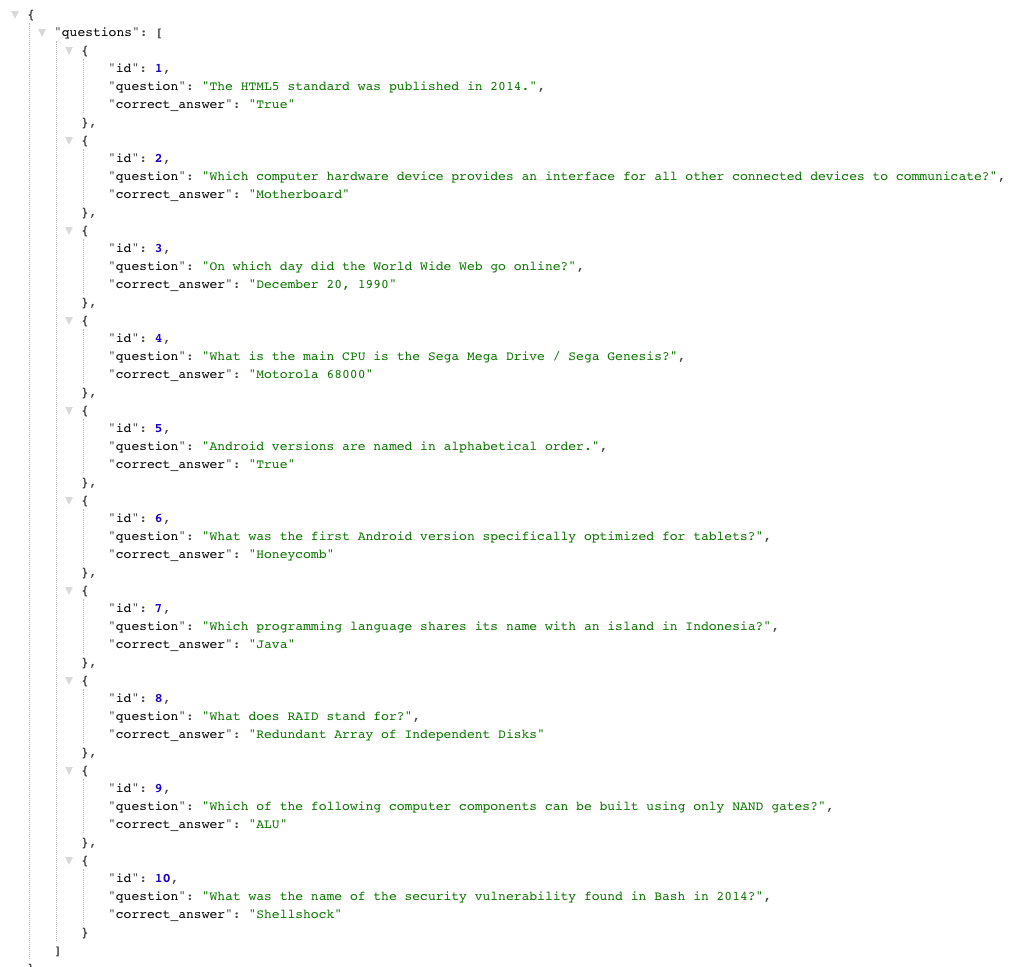 Writing tests for the application

Now that we have set up the server and run the app, we can write a test case for our API endpoint. Create a new file called server.test.ts and add this code to it:

In this example, we import the superoak module and the application we created in server.ts. Then we declare a test case where we create a request using SuperOak and our application. We then make a GET request to the application index route and make the following assertions:

Navigate to the terminal. From the root of the application, stop the server from running using CTRL + C. Then issue this command to run the test:

This should be the response:

With your test cases in place, you can add the CircleCI configuration.

In your project root directory, create a folder named .circleci. Add a file called config.yml to that directory.

In this example, the first thing we do is to specify the version of CircleCI pipeline process engine. Always specify the latest version (2.1 at the time this article was written).

After specifying the CircleCI version, we specify a job named build-and-test. This job has two key blocks: docker and steps. The docker block specifies the images we need for our build process to run successfully. In this case, we are using the official Deno Docker image.

The steps block does the following:

The build-and-test job is executed as specified in the workflows block.

Next, we need to set up a repository on GitHub and link the project to CircleCI. For help, review this post: Pushing your project to GitHub.

Adding the project to CircleCI

Next to your deno_circleci project, click Set Up Project.

CircleCI will detect the config.yml file within the project. Click Use Existing Config and then Start Building. Your first build process will start running and complete successfully.

Click build-and-test to review the job steps and the status of each job.

In this tutorial, I have shown you how to set up a continuous integration pipeline for a Deno application using GitHub and CircleCI. While our application was a simple one, with just one endpoint and one test case, we covered the key areas of pipeline configuration and feature testing.

CI builds on software development best practices in testing and version control to automate the process of adding new features to software. This removes the risk of human error causing downtime in the production environment. It also adds an additional level of quality control and assurance to the software being maintained. Give continuous integration a try and make code base bottlenecks a thing of the past for your team!

Automating deployment of a Dockerized Python app to Docker Hub