Containers have become a widely-used DevOps technology. Containers give DevOps professionals the ability to define infrastructure as code, making it possible to create isolated environments for testing, deploying, and running applications. In this article, we will learn how to deploy a Node.js application using Azure containers to an Azure web app.

To complete this tutorial, you will need:

Creating a container registry on Azure

Our first step is creating a container registry on Azure to store and build a Docker container. Go to your Azure portal home page and click Create. Then click Container Registry from the Containers menu. 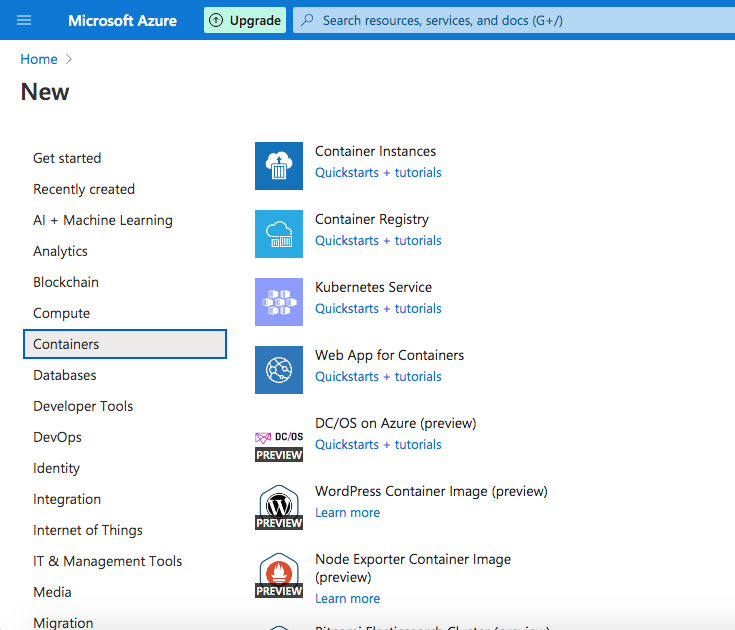 On the registry creation page, fill in the information, including the name for your registry. 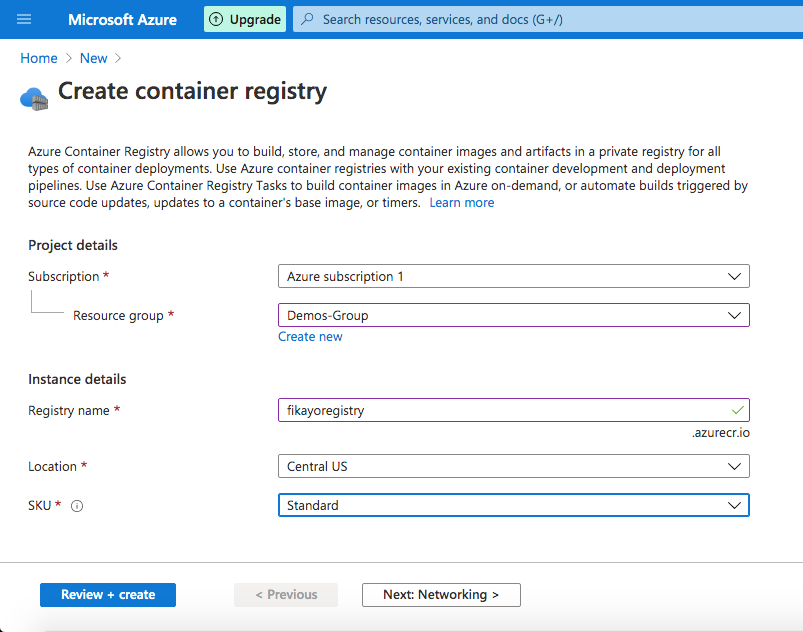 If you prefer, you can use the Azure CLI to create the registry by running:

I have named my registry fikayoregistry, but you might want to use a different name. If you do, be sure to substitute the name you choose instead.

The next step is to clone the Node.js project to deploy to Azure using a Docker container. To clone the project, run:

Next, use cd node-azure-docker go into the root of the project, then install dependencies using npm install.

This project is a basic Node.js API with a single endpoint for returning an array of todo objects. It also contains a test suite for testing the endpoint.

Creating and building a Docker image on Azure Container Registry

The next step is creating a Dockerfile so the custom Docker image can run the project. It will then be pushed to and built on the Azure Container Registry (ACR).

At the root of the project, create a new file, name it Dockerfile (no extension) and enter:

This file uses a node image as its base with the tag current-alpine. It then copies the contents of the project into an app folder inside the image, sets app as the working directory and runs npm install to install dependencies. The application is booted up by running npm start.

At the root of the project, build the image using Dockerfile. Be sure to replace <container_registry_name> with the name you chose earlier. Run:

Note the dot (.) at the end of the command. Make sure to include it; it defines the build context as the current directory.

This image has been given the name mynodeimage, which will appear in ACR. This command sends the folder’s contents to Azure Container Registry, which uses the instructions in the Dockerfile to build the image and store it.

To view the image you created, go to your Azure resources page in the portal. Click your registry then click Repositories from the Services section. 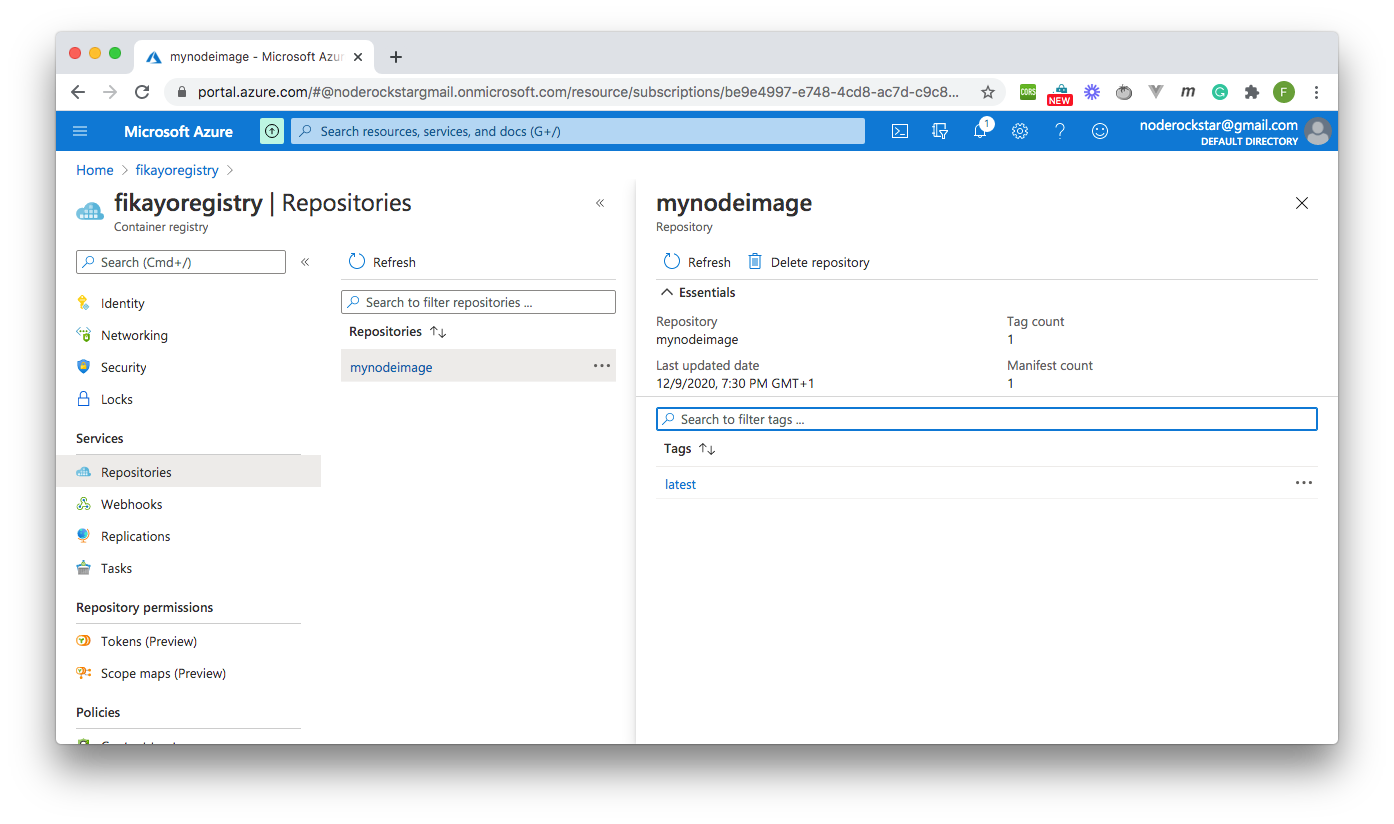 Helpfully, every newly built image is tagged latest. The Docker image that contains the Node.js application is now available in your registry for deployment to the Azure App Service.

To deploy the application, you need to enable Docker access in Azure Container Registry. This step allows the Azure App service to access the containers stored in the registry.

Make sure that Admin User is enabled. 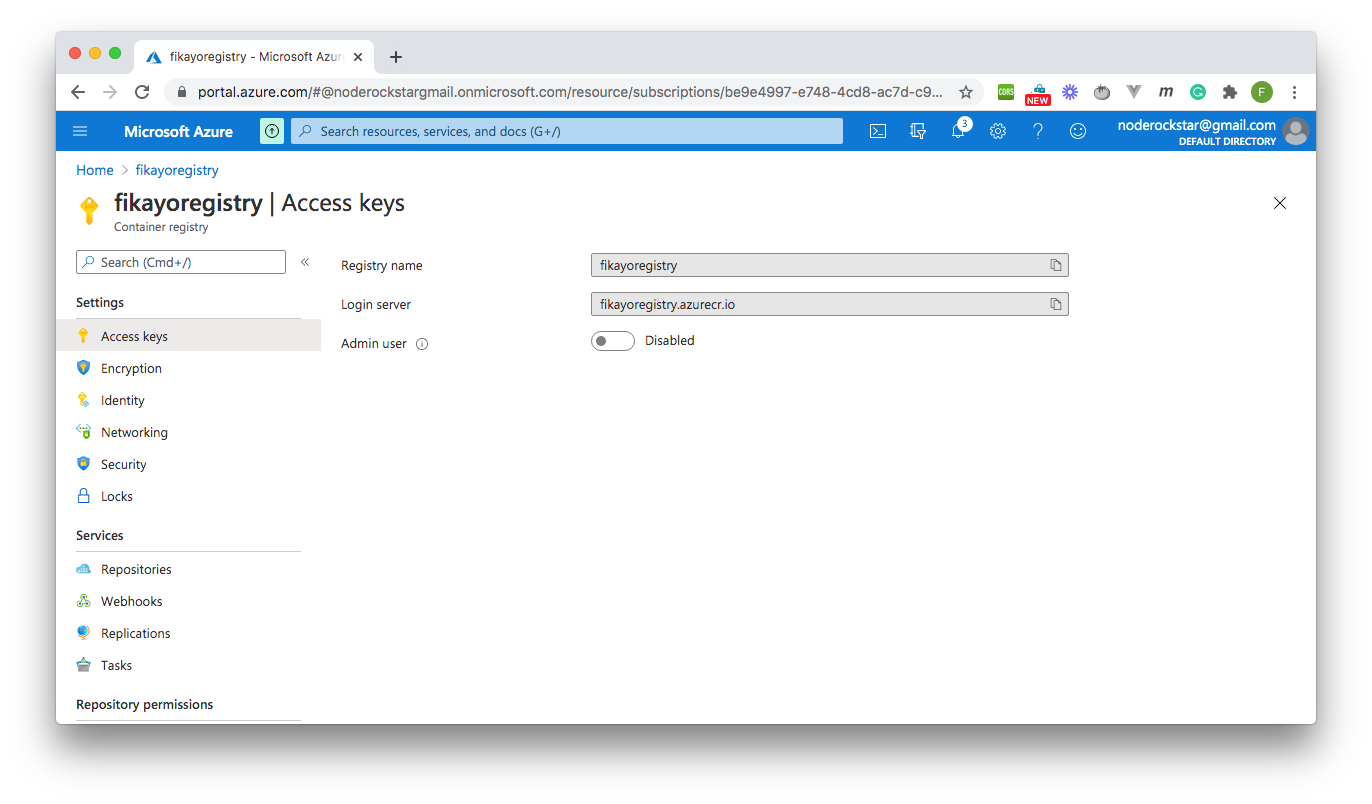 When the Admin User option is enabled, the button will turn blue and display a Username and some passwords. This information is what provides access to the image in the registry for the Azure web app.

Next, create an Azure Web App. From the Azure portal, by click Home, then Create. Select Web App. 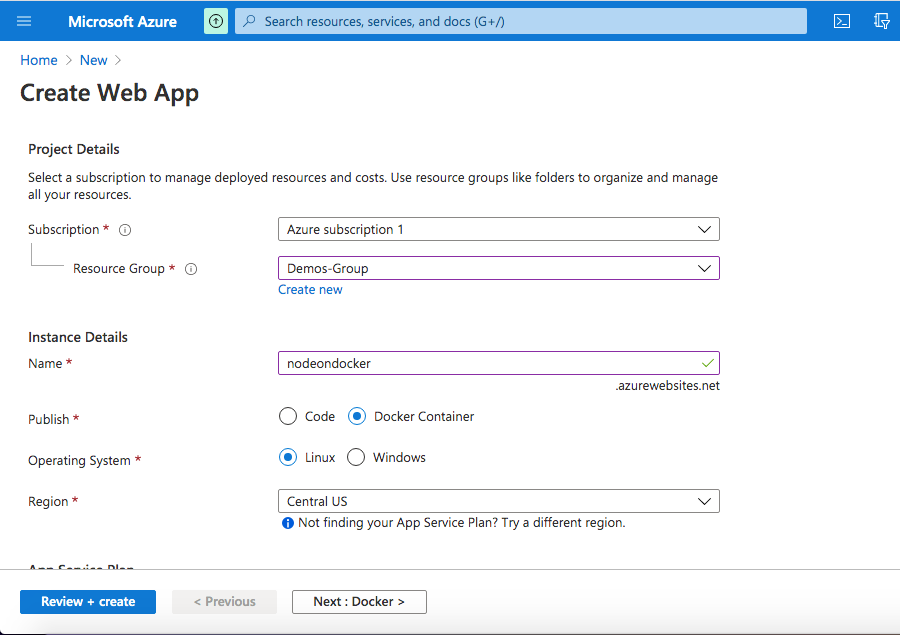 On the Docker page:

Now we are ready to click Review + Create to review the details. Then click Create. After the web app has been created, use your browser to visit the address https://[YOUR_WEB_APP_NAME].azurewebsites.net/todos. Be sure to replace YOUR_WEB_APP_NAME with the name of the web app you created. I have used https://nodeondocker.azurewebsites.net/todos for mine.

You are not here for a one-time deployment, right? You want continuous deployment. To set it up in Azure, go to your Resources page and click your web app name to open the Overview page. From the Setting section on the side menu, by click Container Settings. On the Container Settings page, scroll down to the Continuous Deployment option, turn it on, and click Save. 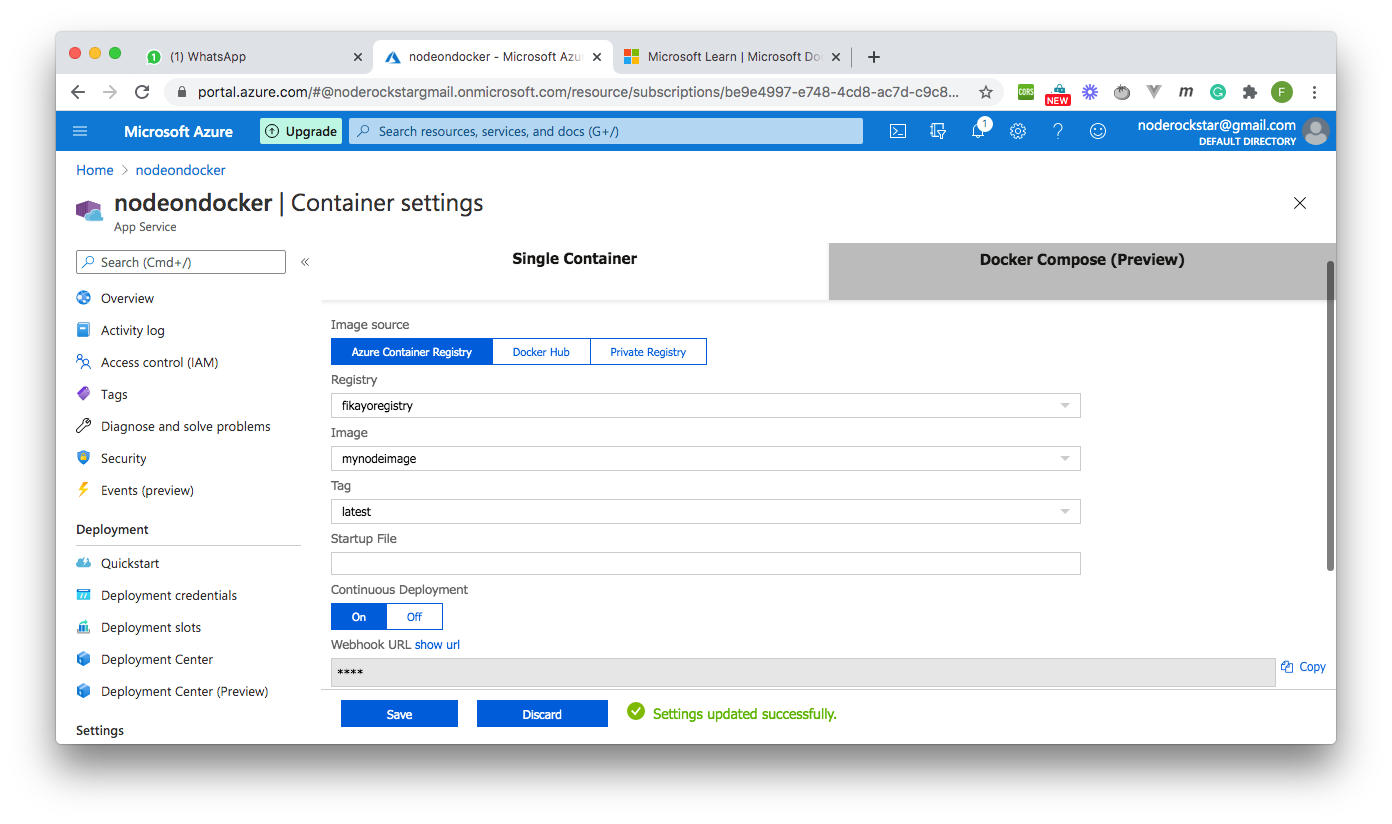 With continuous deployment selected, the web app will trigger a new deployment of the Node.js application each time the Docker image is rebuilt on Azure Container Registry .

Before heading over to the CircleCI console, let me explain the strategy we will use to set up a continuous deployment pipeline to the web app using containers. You already know that the web app will redeploy a new version of the application when the image is built or rebuilt on Azure Container Registry. The goal is to somehow make sure that once code is pushed to a remote repository, a new build is triggered. These are the steps we will use in this tutorial:

We will begin by setting up the project on CircleCI.

First, run rm -rf .git at the root of the project to erase any existing git history. Next, push the project to a remote repository on GitHub. Make sure that this is the GitHub account connected to your CircleCI account.

Go to your remote repository and create a deploy branch. 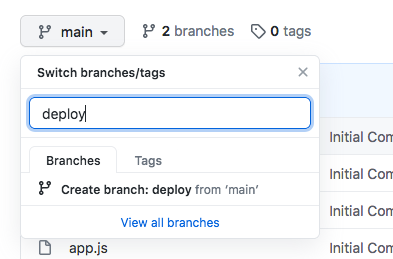 This branch will be the one that is watched to trigger rebuilds on the Docker image. 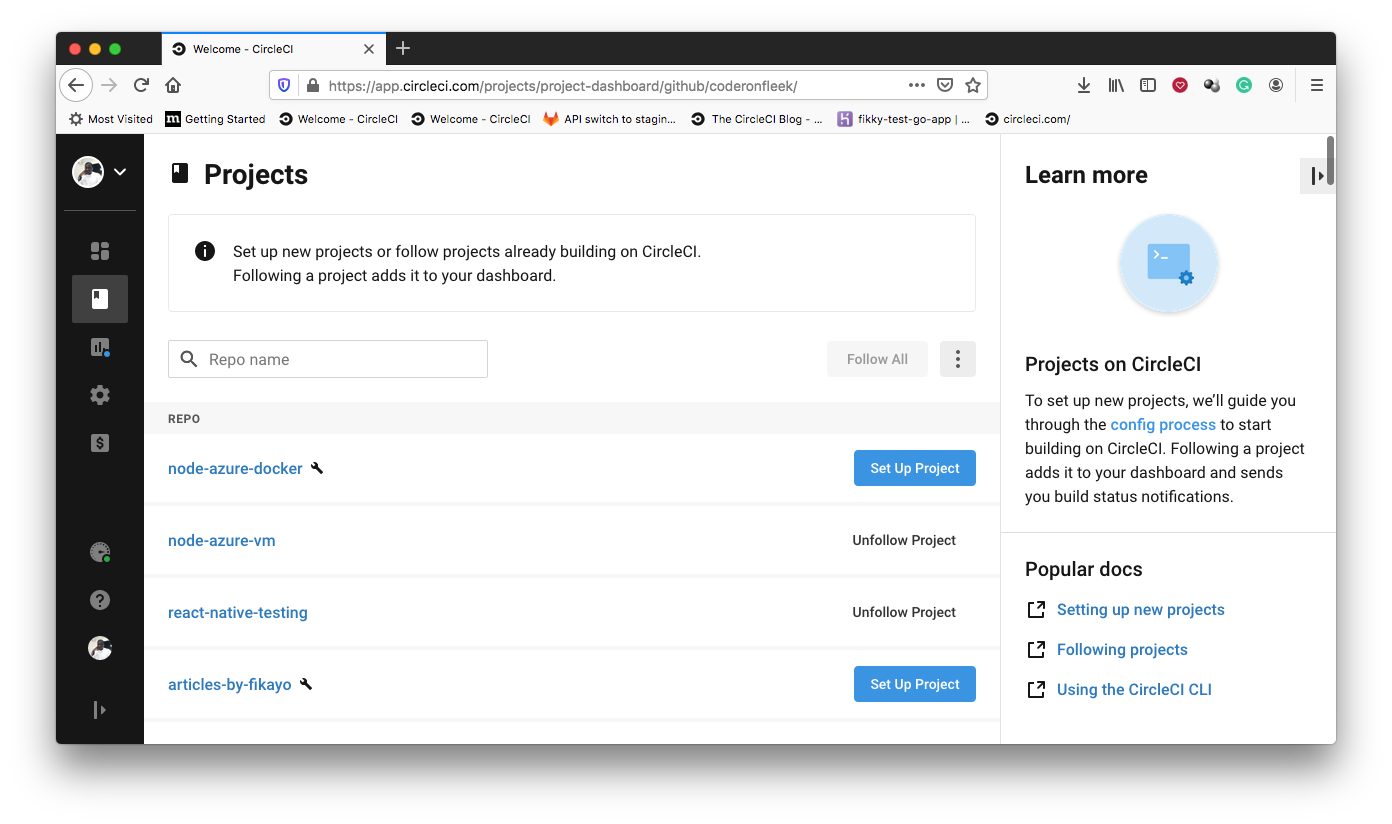 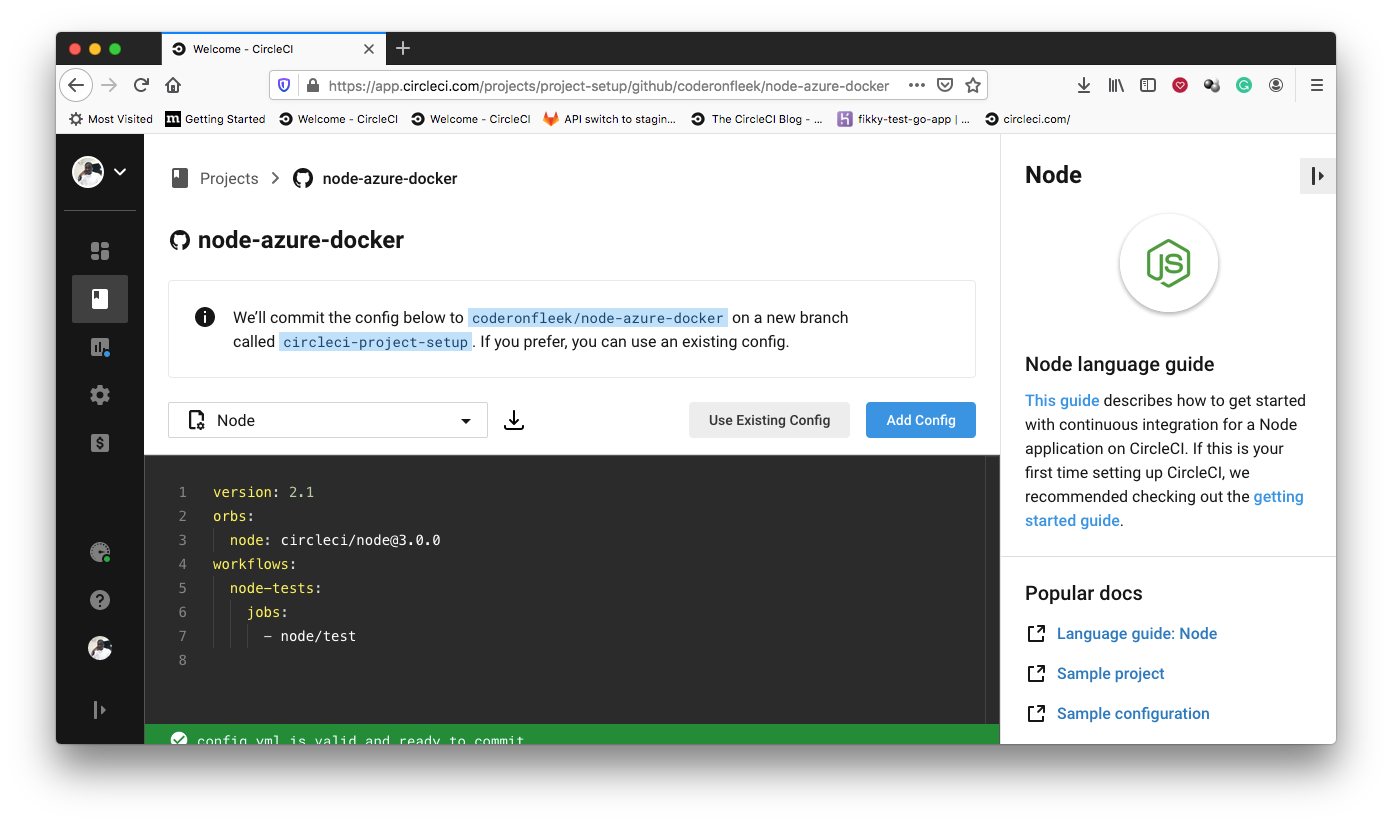 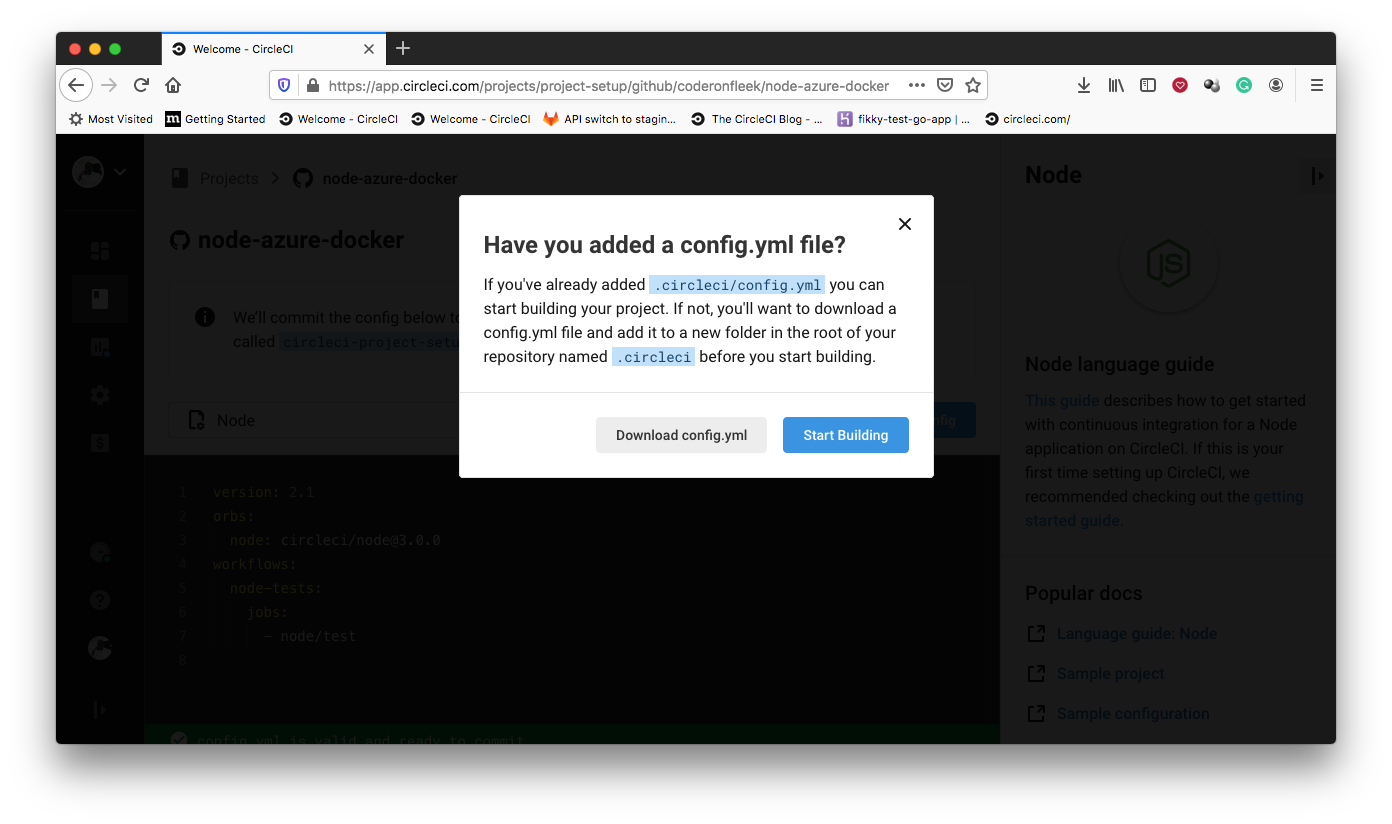 Note: This build will fail because you have not set up the configuration file yet. We will do that later on in this tutorial.

Because a push will be made to this project’s deploy branch from the pipeline configuration, we need to set up authenticated access so that CircleCI can access the repository on GitHub.

Fortunately, CircleCI provides a way to add a User API Key to achieve that. From your project, click Project Settings, (top right of the page) then SSH Keys (on the side menu).

In the User Key section, click Authorize with GitHub. If you have already done this, the option will not be visible, so skip the next paragraph and copy the fingerprint in the User Key block.

After the connection to GitHub is made, an Add User Key button appears in the User API Key section. Click this button to generate a fingerprint that we will use in the deployment pipeline, later on in the tutorial. Copy the fingerprint and keep it in a safe location.

I mentioned earlier that we need an Azure Container Repository task to watch the deploy branch for updates and trigger rebuilds. First, though, we need a GitHub personal access token.

Enter a description for the key. Grant all permissions except delete_repo. For this tutorial, the most important permission is the ability to create a webhook in your repo. We will use this webhook to signal the Azure Container Registry to trigger a new build of the Docker image. 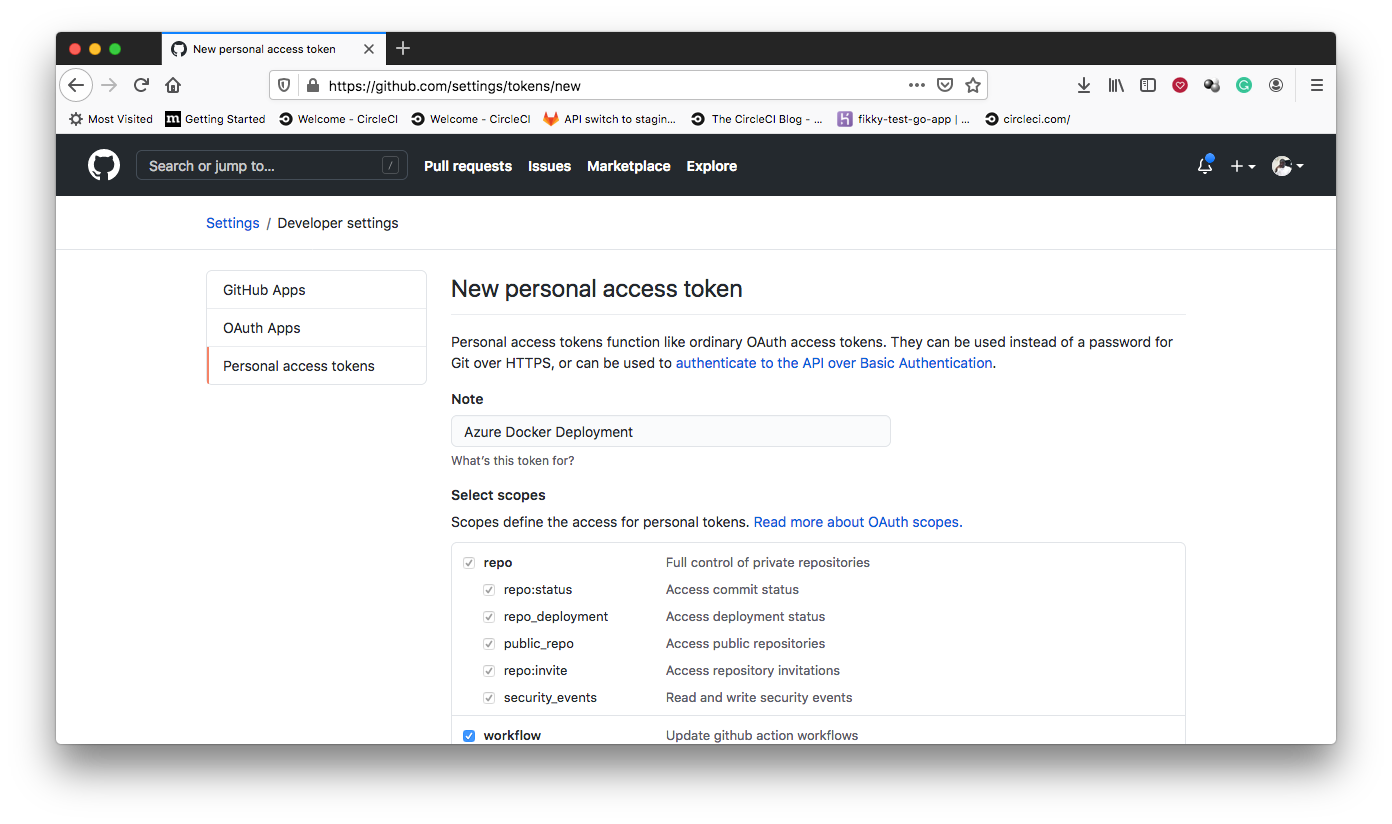 Click Generate token and copy the token when it is displayed. The token will not be displayed again, so make sure you get the information now.

To create an Azure Container Registry task, go to the root of your project. Using your repository address, your registry name, and your GitHub access token, run:

This code creates a buildnodeapp task that will rebuild the mynodeimage image each time updates are pushed to the deploy branch. To view your newly created task, go to the registry page and click Tasks.

Our next step is to write the pipeline script for continuous deployment of the Node.js app to the Azure web app using Docker container. To enable the pipeline script to push updates to the deploy branch of the GitHub repo, we will use the node package gh-pages. Most often, this package is used to push files to a dedicated gh-pages branch to deploy static sites to GitHub pages. Conveniently, this package is configurable, so you can push files from one branch to another in any repository.

At the root of the project, install the gh-pages package as a development dependency:

Next, add the deploy script in the package.json file:

This script invokes gh-pages using npx to push files from the main branch to the deploy branch. I added the --message parameter of [skip ci] Updates so that CircleCI does not re-run the pipeline when changes are pushed to this branch.

At the root of your project, create a folder named .circleci and within it, create a file named config.yml. Inside config.yml, enter:

This file defines a workflow with two jobs: build and deploy.

The build job checks out the code from the remote repository, installs dependencies, and runs the tests to make sure there are no bugs in the code. Once the build job is complete, the deploy job takes over. It checks out a clean copy of the code because we do not want to push the node_modules folder from the previous job to the watched branch. The deploy job then configures access to GitHub so the pipeline script can push updates to the watched branch. The job then runs the Node.js script to push updates and trigger a new build of the Docker image.

The deploy job has a dependency on the build job so it will not run until the build job is complete. To see how the deployment changes after running both jobs, we need to add one more task to todo.js:

Adding a task means we need to update the test suite in __tests__/apiTest.js to check for four todo objects. Change line 15 to:

Save changes to the project and commit to your main branch in the remote repository. 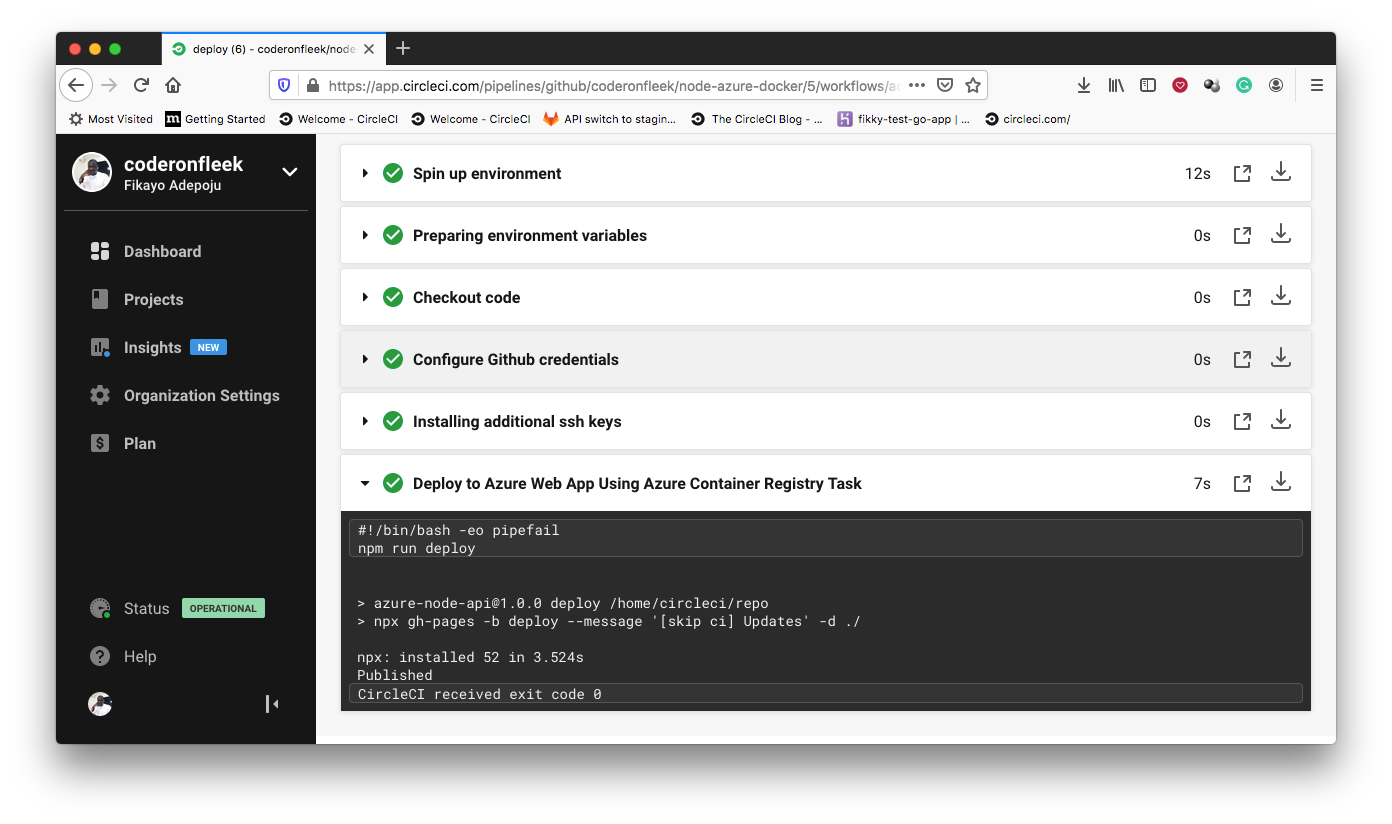 If you head over to the buildnodeapp on your registry page and click the Runs tab, you will find a new build of the Docker image running (cj2).

Now head over to your browser where the /todos endpoint was previously loaded. When you reload the page, you will find a new todo object.

Containers give application developers and DevOps architects the ability to bridge gaps between development and production environments that may lead to bugs or apps not running as expected. In this tutorial, we have demonstrated how to use containers to make seamless deployments to Azure web apps. I hope you can use what you have learned to improve your own applications.