This tutorial is a follow-up to TurboCharging your Android Gradle builds using build cache.

The key focus of this post is the remote build cache, a build speed acceleration technology that can be implemented for both local and CI builds. This is a technology worth knowing about because:

Gradle provides a build cache node available as a Docker image. You can host this image in a number of ways. In this tutorial, I will lead you through the steps of setting up a build cache node on GCP (Google Cloud Platform), a free tool.

Note: If you are setting up your console for the first time, agree to terms of service, then click the Agree and Continue button. 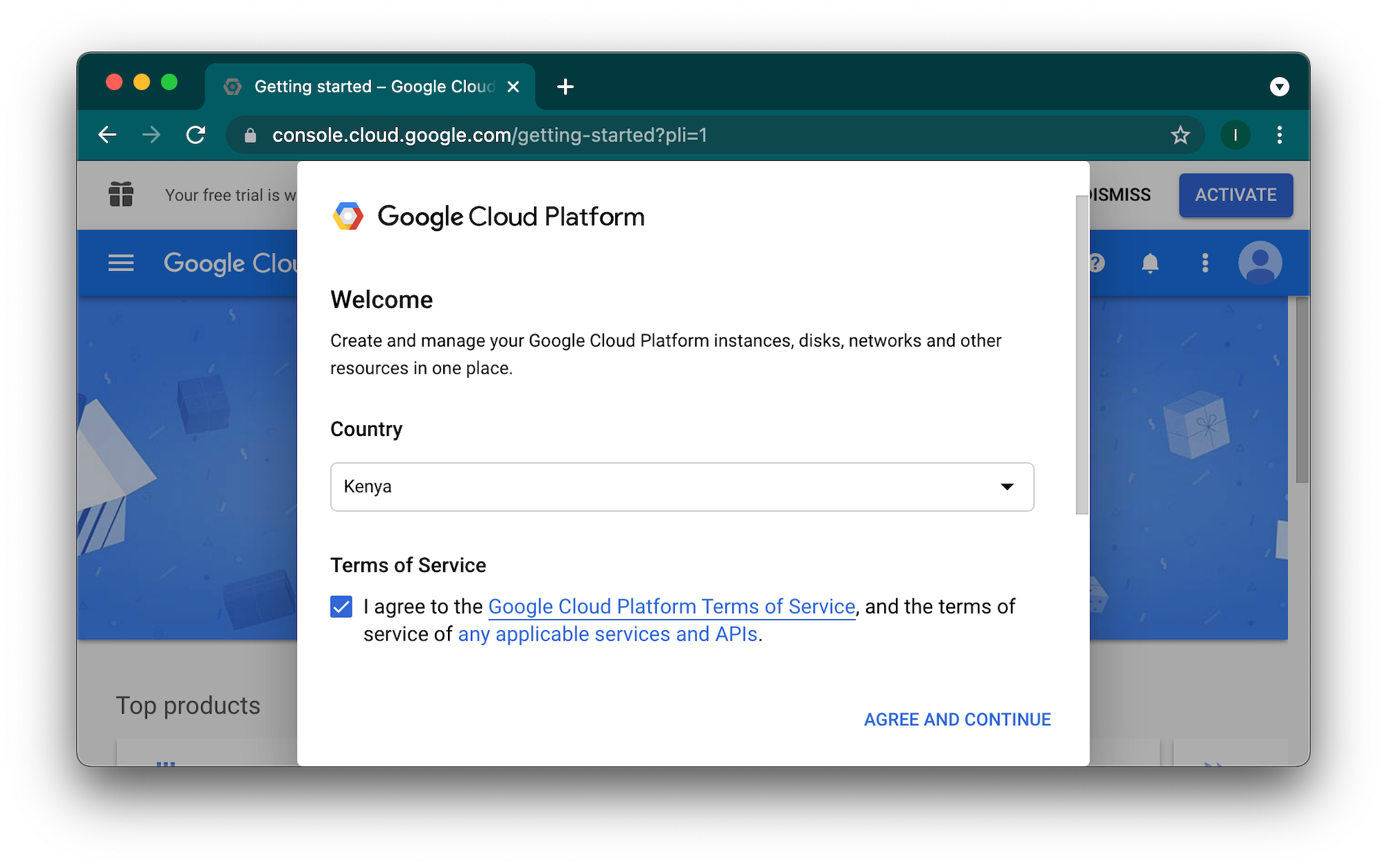 To access the free tier products on GCP, select the Getting Started option from the Navigation menu. Then click the Get Started For Free button. 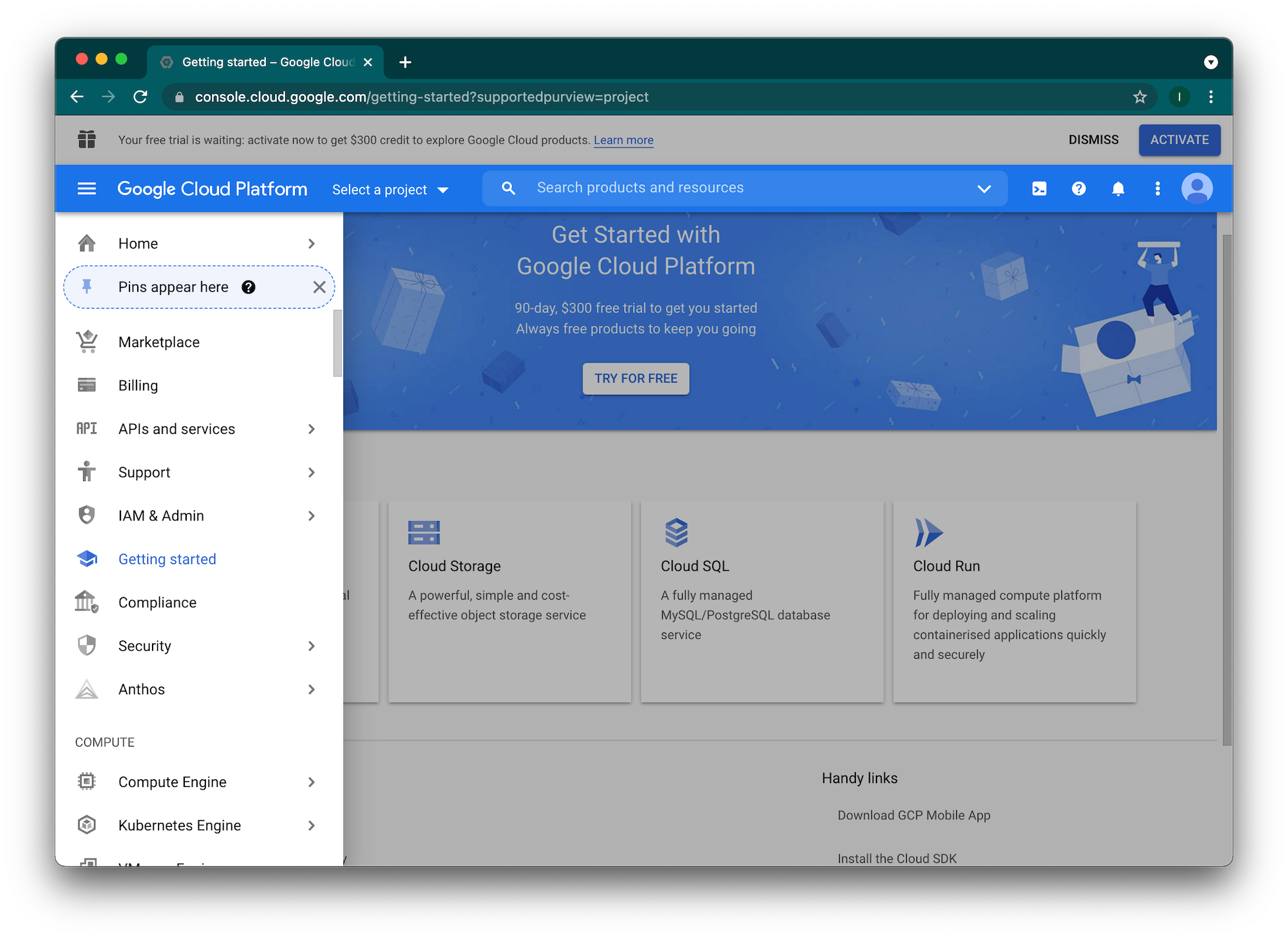 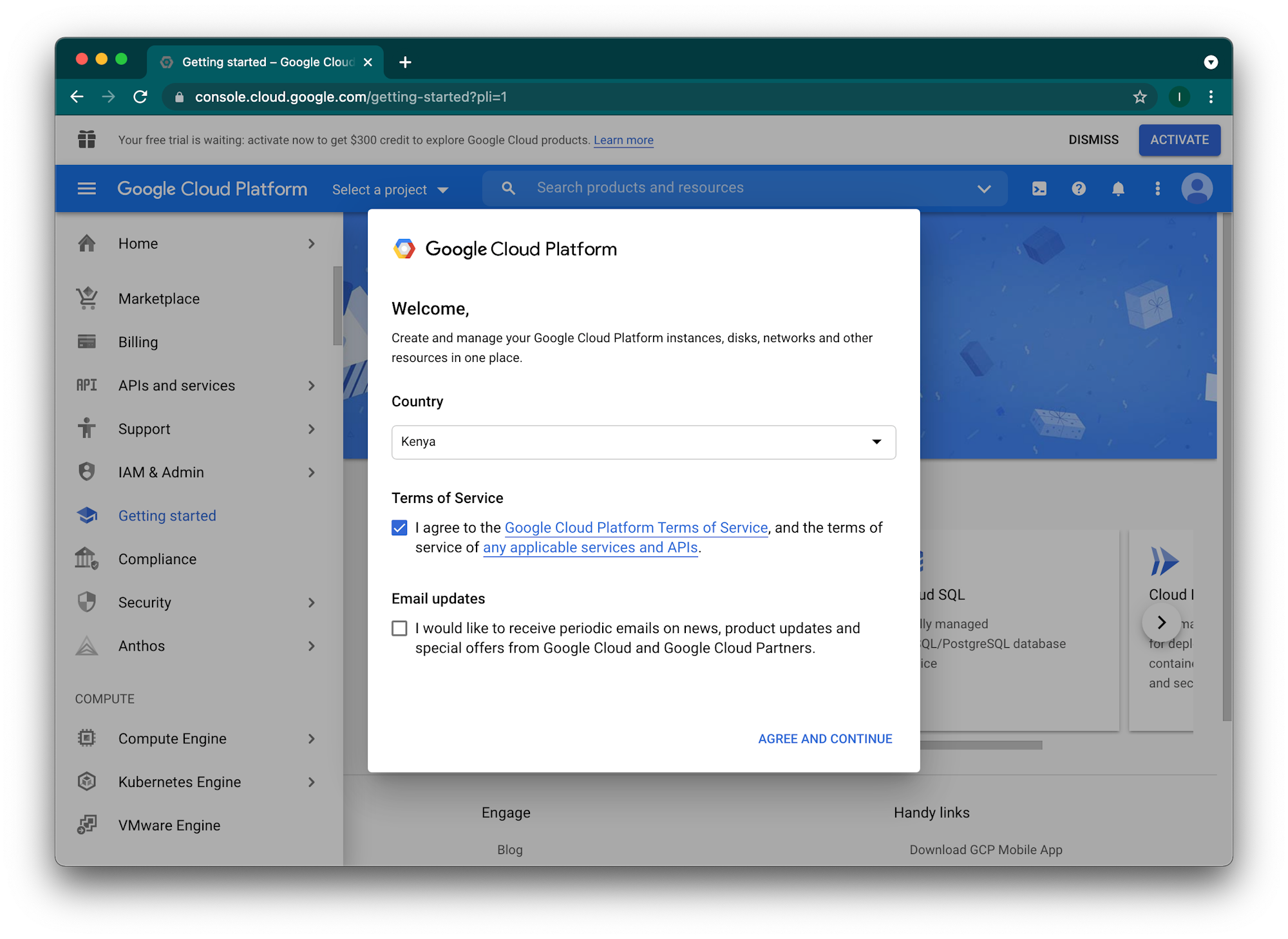 Next, enter a valid phone number. Google will send you a confirmation text. After you complete the verification, click the Continue button. 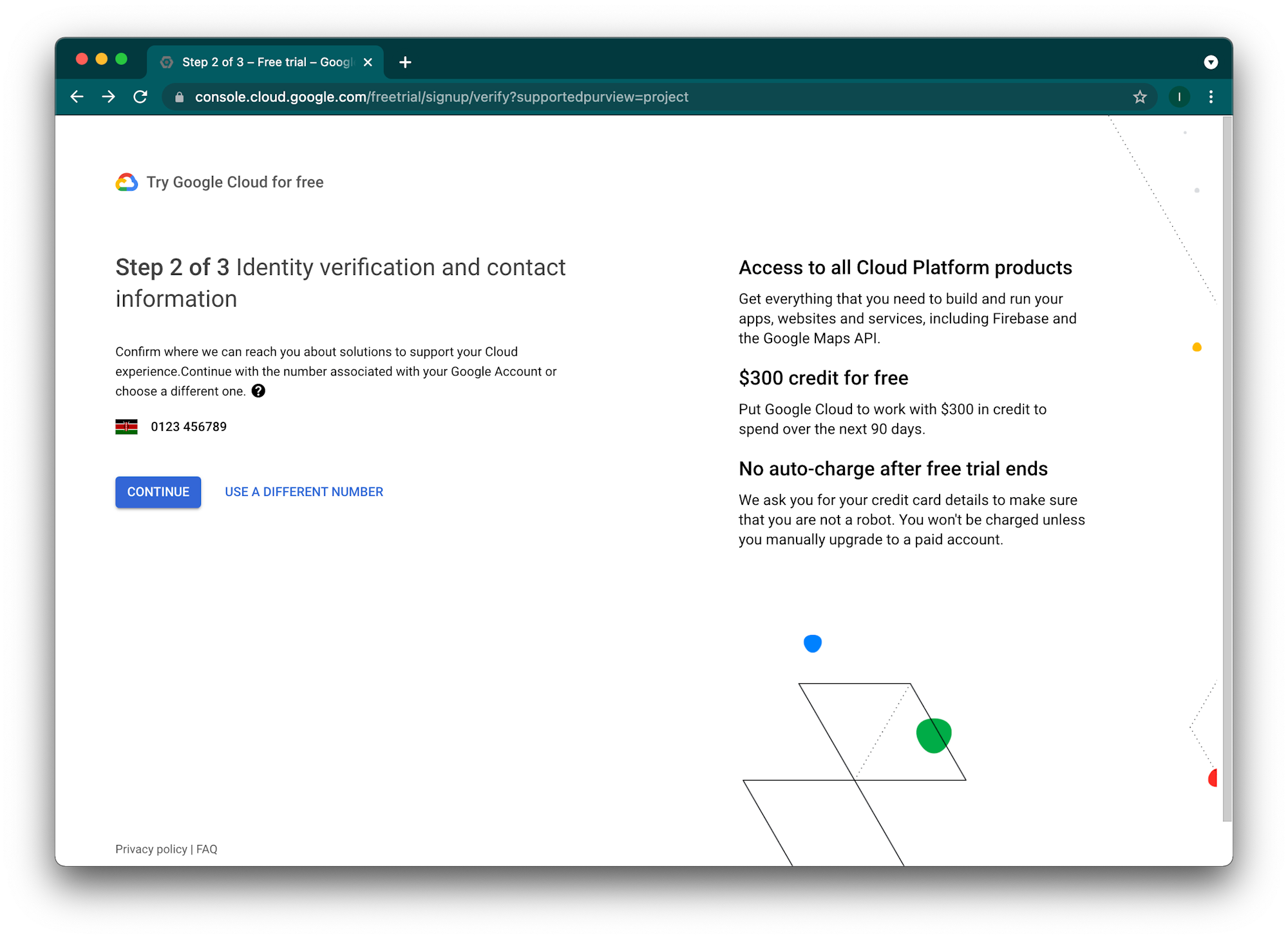 Although the next step requires you to enter you payment information, you will not be charged unless you turn on automatic billing. 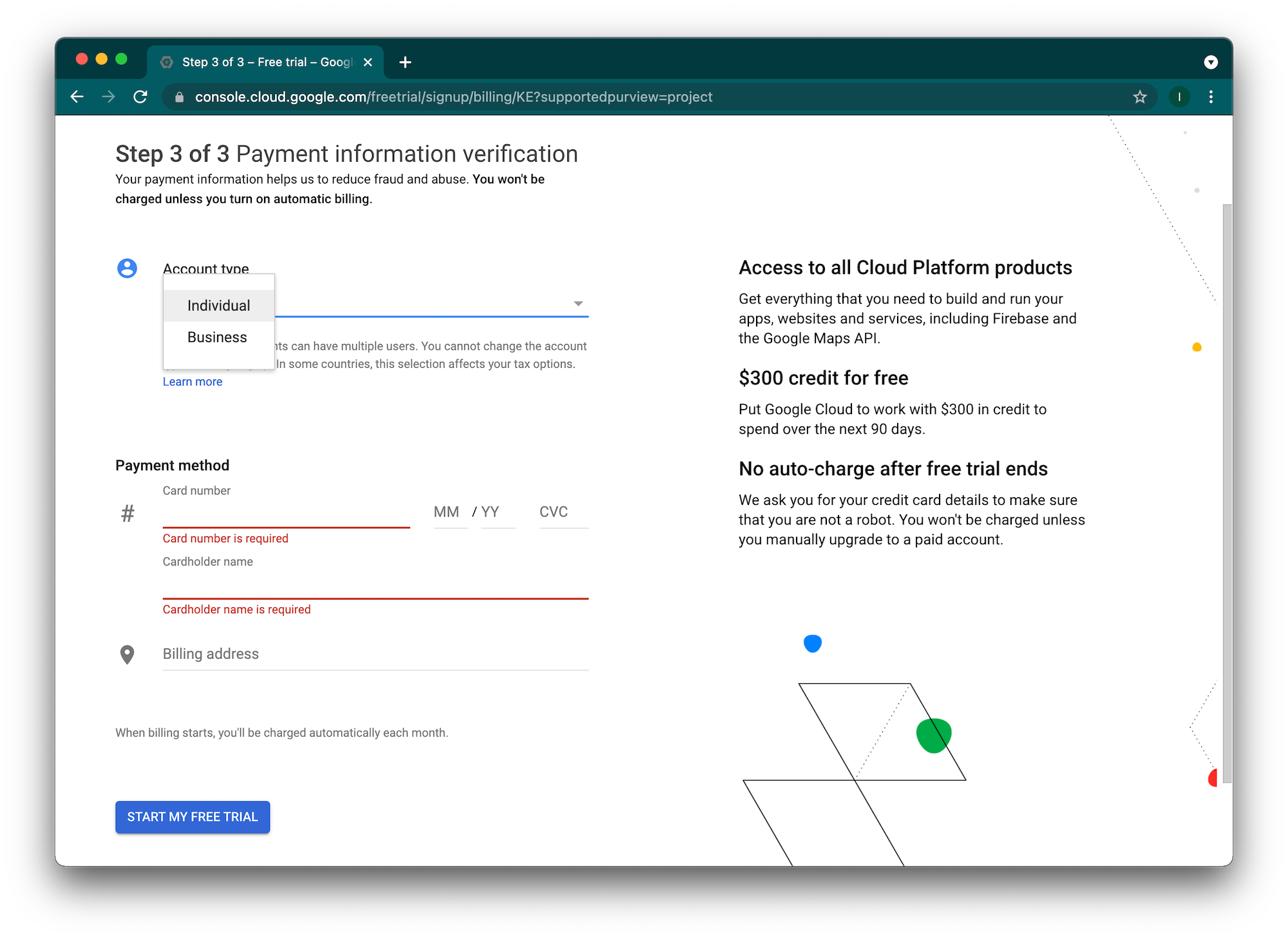 When you successfully complete the verification process, you will see a confirmation message. Click Got it to proceed.

Now that you have set up the console to use the free tier products, you can go on to the build cache node setup.

Setting up the build cache node

The build cache node setup is a 2 part process on the GCP instance:

By leveraging the Build Cache Node User Manual and adding some customized configurations for GCP, you can set up your build cache nodes.

A VPC network is a virtual version of a physical network, implemented inside of Google’s production network. It does a bunch of things but of importance is that it provides connectivity for your Compute Engine Virtual Machine (VM) instances. This is important because by default, incoming traffic from outside your network is blocked. That means we need to create a firewall rule to control incoming or outgoing traffic to our build cache node VM instance.

On the Google console dashboard, navigate to: Networking > VPC Network > Firewall. Click Enable to enable Compute Engine if you are prompted to do so. Then, click the Create Firewall Rule button.

When the details are entered, click the Create button. 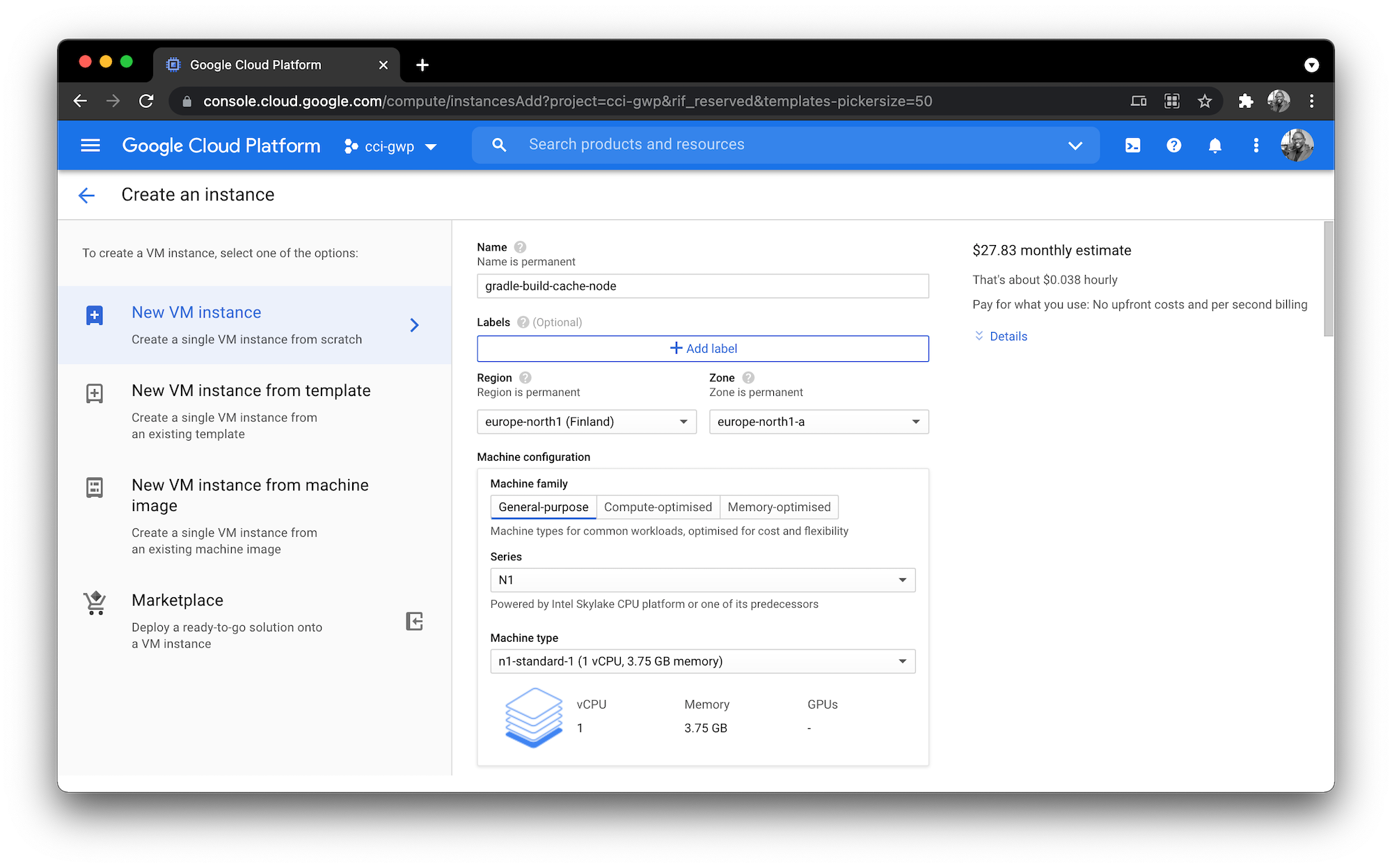 Next, select Deploy a container image to this VM instance. In the Container Image field, enter gradle/build-cache-node. 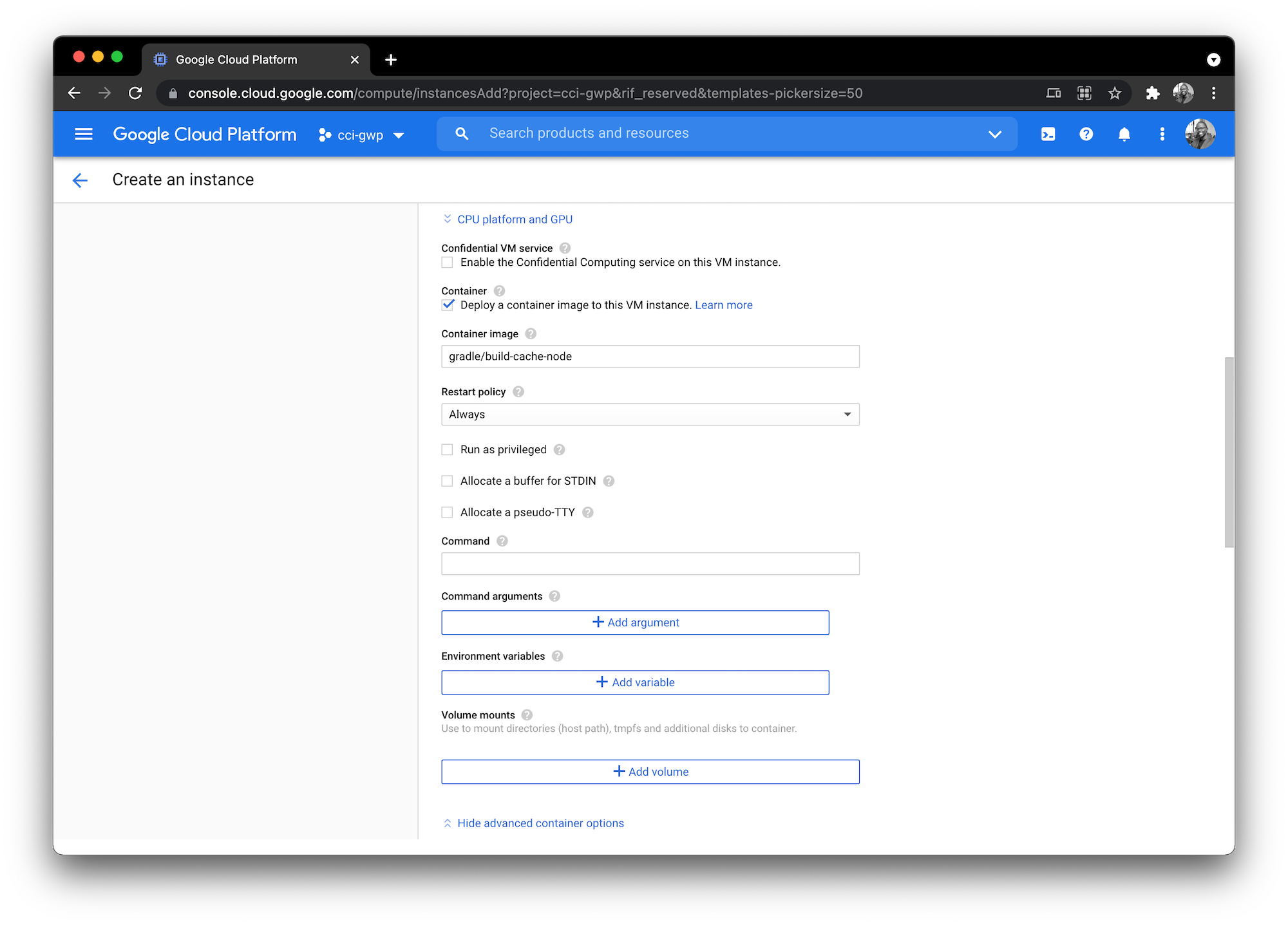 We also need to set up a disk volume for our build cache to use. Expand Advanced container options and click Add Volume. Then add these parameters: 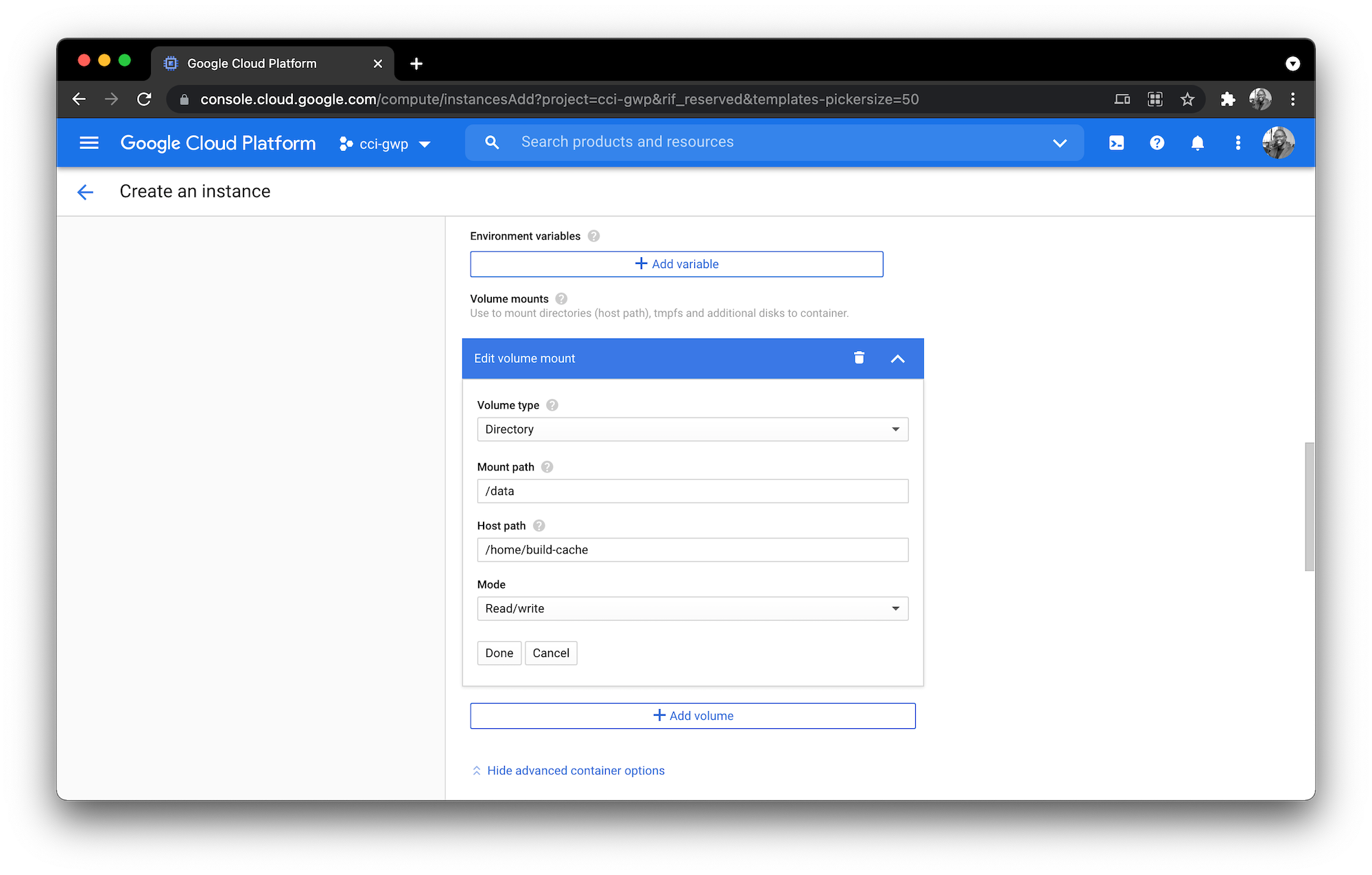 Your next task is to add tags and firewall rules to allow specific network traffic from the Internet. Expand the Management, security, disks, networking, sole tenancy section and select the Networking tab. Then add the firewall rule we created earlier: 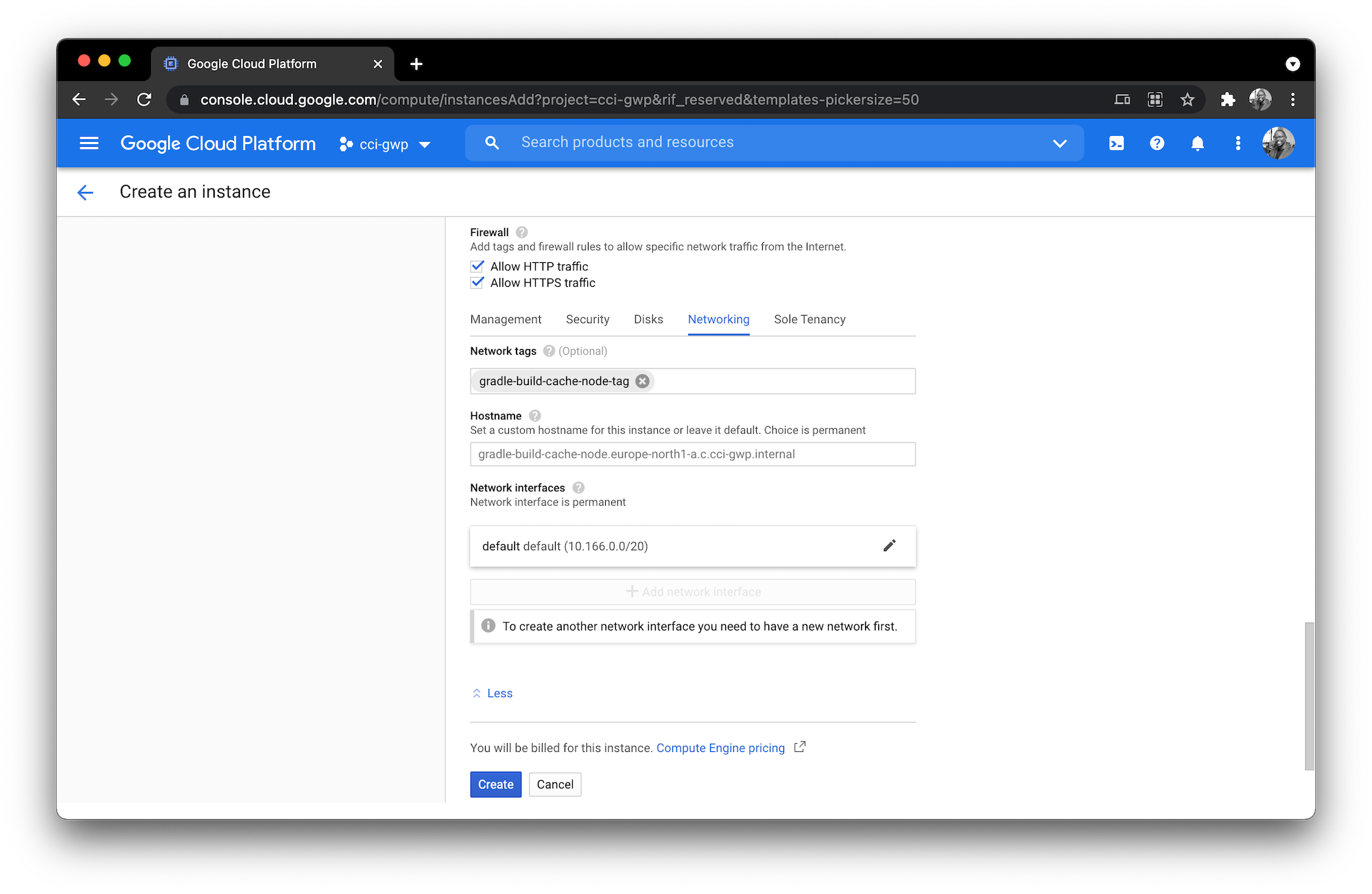 Click Create and wait for your new VM to spin up.

Note: If you get a message that the site can’t provide a secure connection, access the IP via HTTP and not HTTPS. 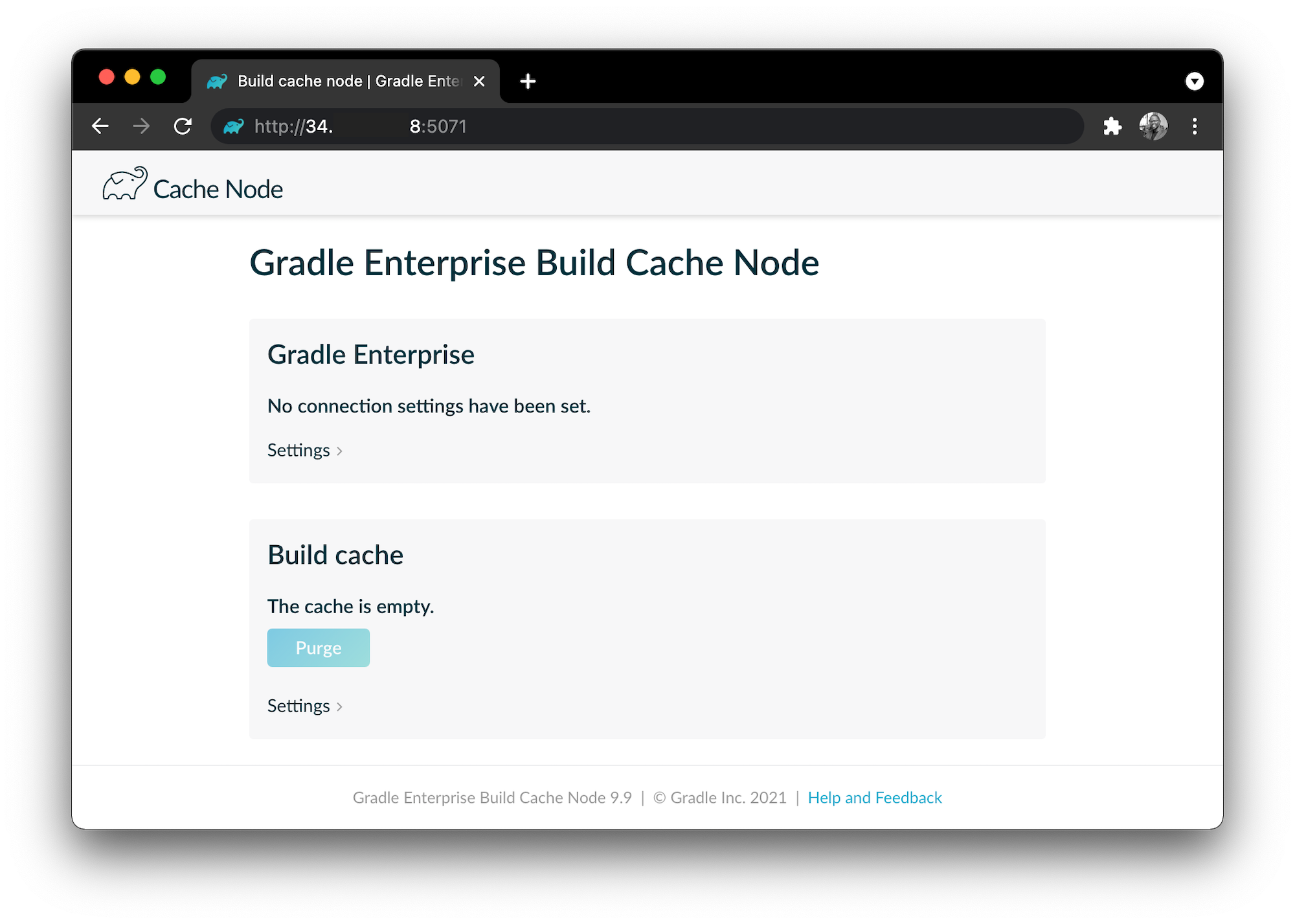 This next step is important because we are implementing the UI Authorization security check. By default, the built-in cache node allows any user to store and retrieve entries from the cache. This is not ideal because unauthorized users can store, retrieve and delete cache entries. The only system allowed to make changes to the build cache node is your CI server, making it your single source of truth.

To change this, collapse the Settings section under Build Cache. Click Add user, and give the new user a username, password, and access level of Read & write. Read & write access allows storing artifacts. The (notes) field is not required, but it is helpful if there are multiple users for different scenarios.

Once a user has been added to the system, it is possible to restrict anonymous access to None for no access or Read for read-only access. 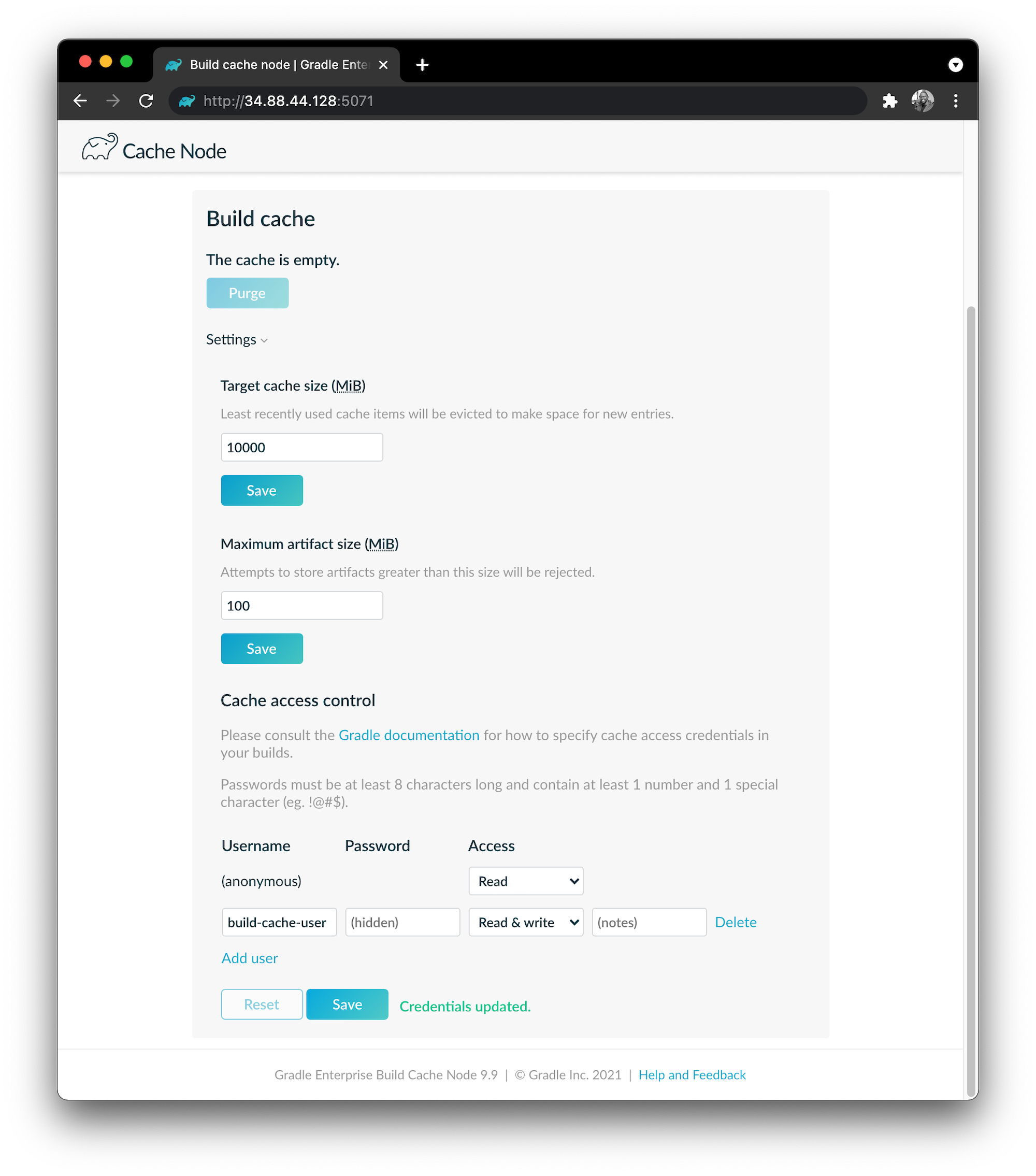 The recommended approach is to create a user with Read & write access, and restrict anonymous access to Read only. CI builds then authenticate as the user and write to the cache, while developers connect anonymously and only read from the cache.

Note: If you try to access the cache node and you aren’t authorized, you will get a response status 401: Unauthorized error.

You can configure the credentials the HttpBuildCache uses to access the build cache server as shown in the settings.gradle file.

Now, we need to make sure that the Gradle build cache is working as expected. Push the changes you made to your settings.gradle file to the GitHub repository. This push triggers the CI build.

Once the build successfully completes, there will be some artifacts stored in the build cache as shown on the UI dashboard. 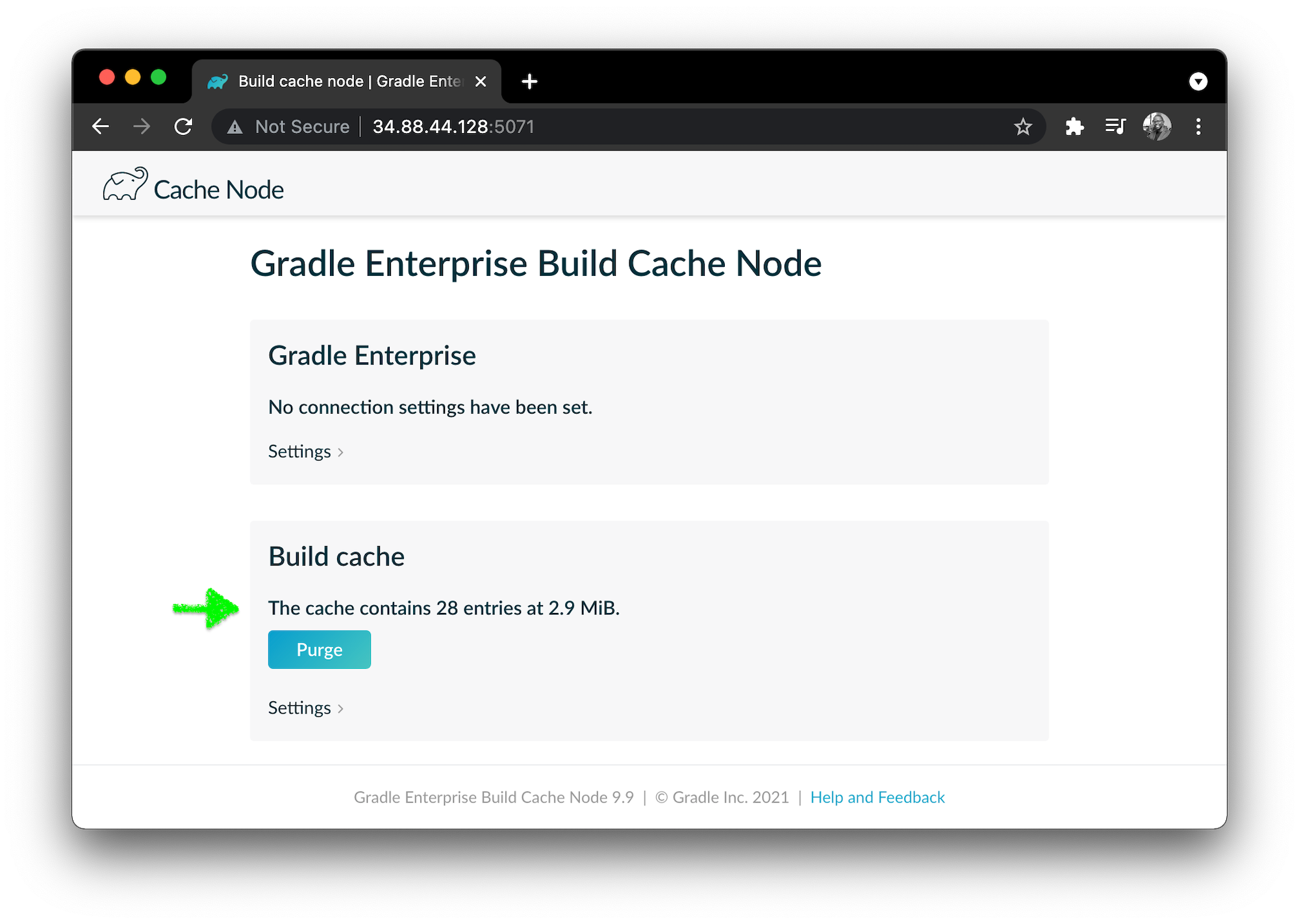 In this tutorial, you have learned how to create and run a Gradle build cache node using a GCP VM instance. You updated your app and pushed its cache to it. You now have experience using build speed acceleration technology that you can use for your local and CI builds. With a cache system in place, you no longer need to run the entire project from scratch. This saves your team time and resources, and lets you push smaller fixes and updates more often, so you can add features and fix bugs faster.

Taracha is a creator whose mission is to help companies solve complex problems in the simplest way possible. He cares about finding visions and causes that he is passionate about and using technology to help these companies solve their challenges.

He is currently a Senior Software Engineer at Premise Data, where he champions the development and deployment of new product features and is particularly passionate about the Developer Productivity Engineering space.