The Gradle Build Cache is designed to help you save time by reusing outputs produced by previous builds. It works by storing (locally or remotely) build outputs, and allowing builds to fetch these outputs from the cache when it determines that inputs have not changed. The build cache gives you the ability to avoid the redundant work and cost of regenerating time-consuming and expensive processes.

Using the build cache can benefit you by:

The build cache allows you to share and reuse unchanged build and test outputs across the team. This speeds up local and CI builds since cycles are not wasted re-building components that are unaffected by new code changes.

For the sake of time, we will be using a starter project from the previous tutorial in this series Gradle build scans for Android projects: local and CI builds. Download the starter project here. We will also use Gradle’s build cache documentation.

To get started, click the Run button on Android Studio.

Note: If the app does not run on Android Studio, invalidate the cache and restart by selecting Invalidate cache/Restart from the File menu.

For this tutorial, we are using Gradle version 6.7. This is a change from the previous tutorial, so you will be prompted to update the project files.

First, change the last line in the file gradle/wrapper/gradle-wrapper.properties to:

Another change is that we will use com.gradle.enterprise as the plugin ID. This plugin must be applied in the settings.gradle file of the project.

As the last change, remove the plugins block (lines 24-26) in the build.gradle. This format is deprecated in Gradle 6.7.

If you prefer, you can use an alternative setup branch of the project. The changes to the project files outlined above can be seen in this GitHub pull request.

With that out of the way, we can continue.

For this tutorial, we will use the second option. Open the gradle.properties file and a new line: 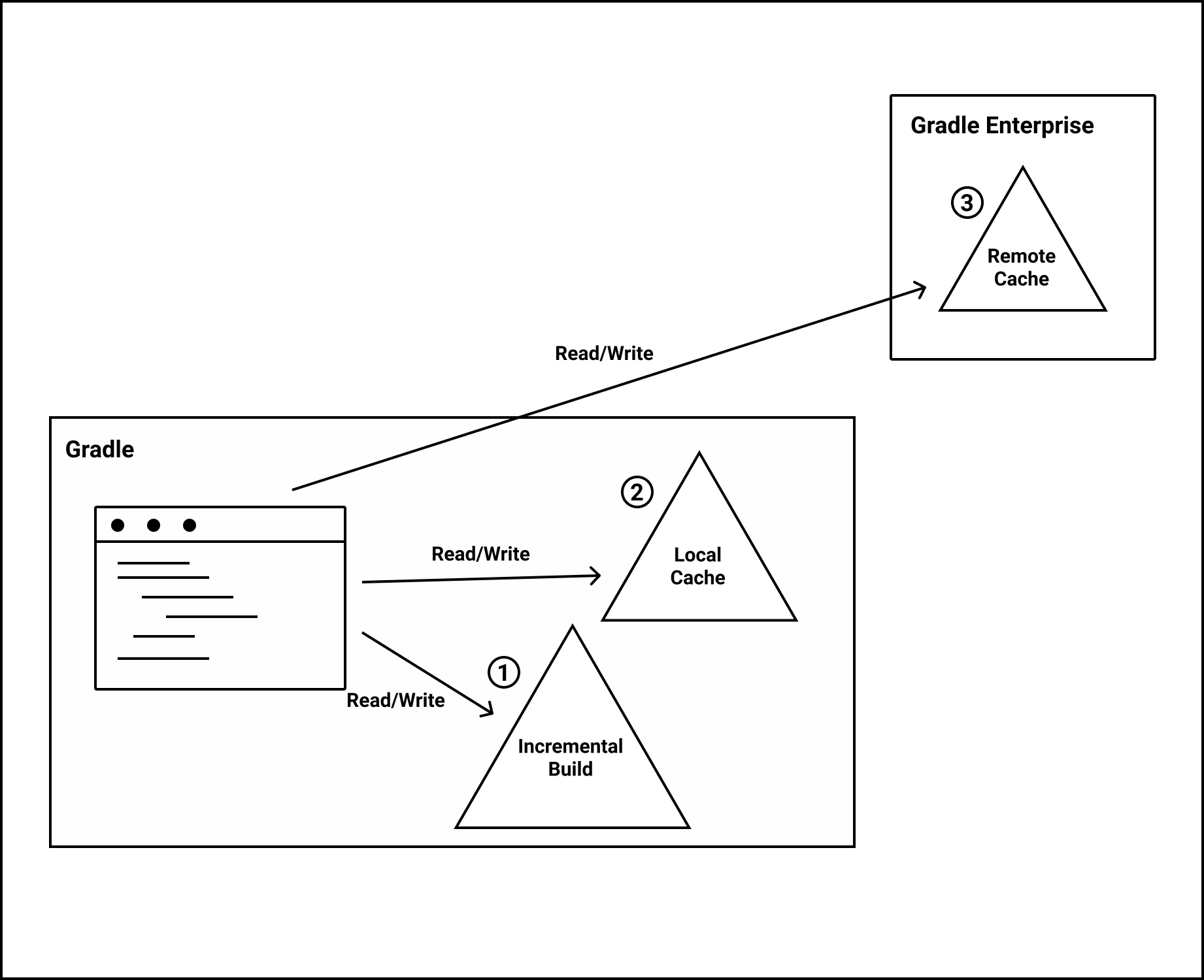 Gradle has 3 layers of reuse that prevent potentially expensive tasks from being executed unnecessarily. These layers make your builds faster in these 3 target scenarios:

NOTE: Gradle stores (“pushes”) build outputs in any build cache that is enabled and has BuildCache.isPush() set to true.

The next step is to configure the build cache by using the Settings.buildCache(org.gradle.api.Action) block of the settings.gradle file. We will start by configuring the local cache, then move onto the remote cache.

The built-in local build cache, DirectoryBuildCache, uses a directory to store build cache artifacts. By default, this directory is stored in the Gradle user home directory, but its location is configurable.

Gradle will periodically clean up the local cache directory by removing entries that have not been used recently.

For more details about the configuration options, refer to the DSL documentation of DirectoryBuildCache.

Add this code snippet to the settings.gradle file: 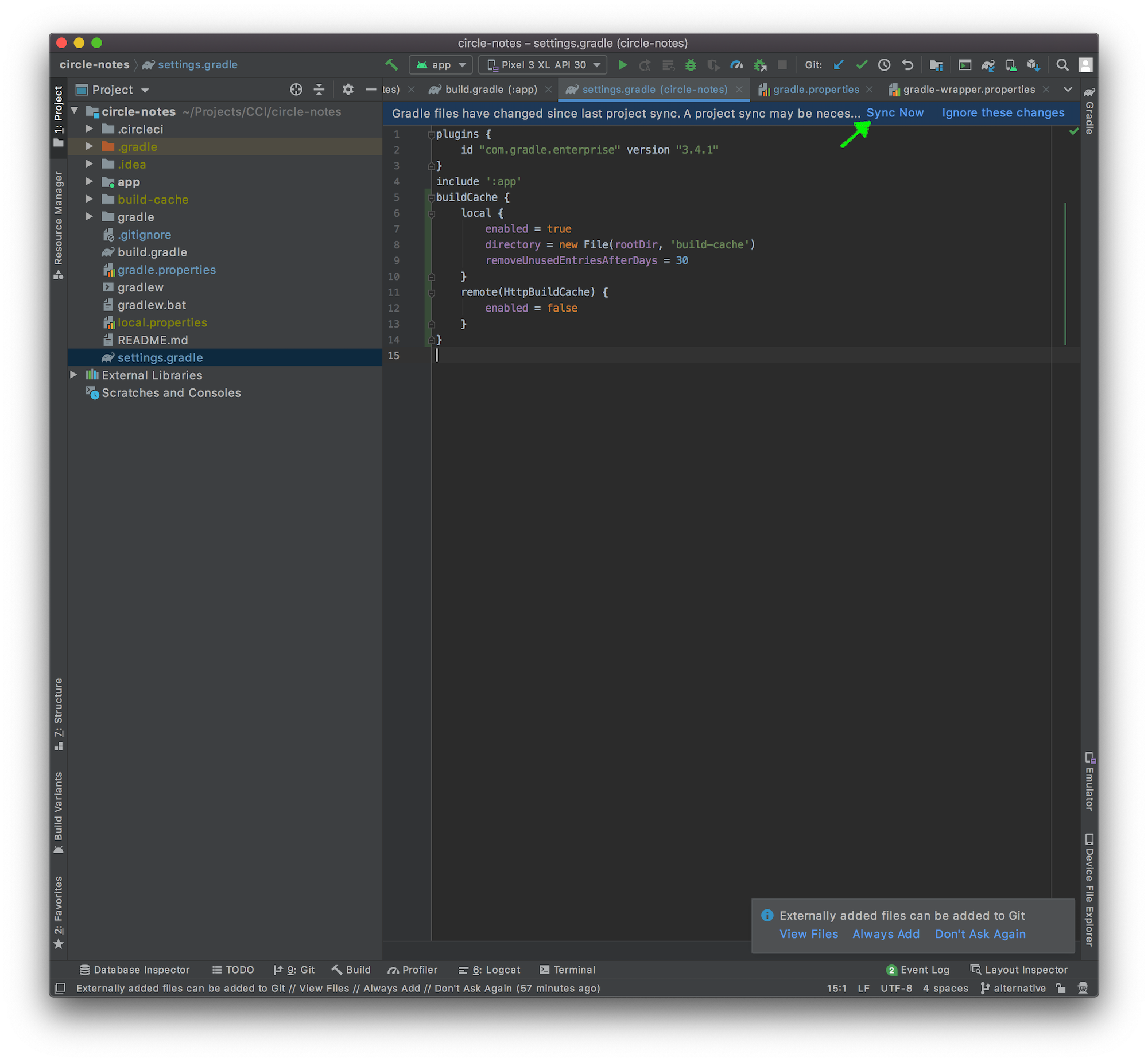 From the Android Studio toolbar, select Build then Rebuild. This will generate artifacts in the build-cache directory. 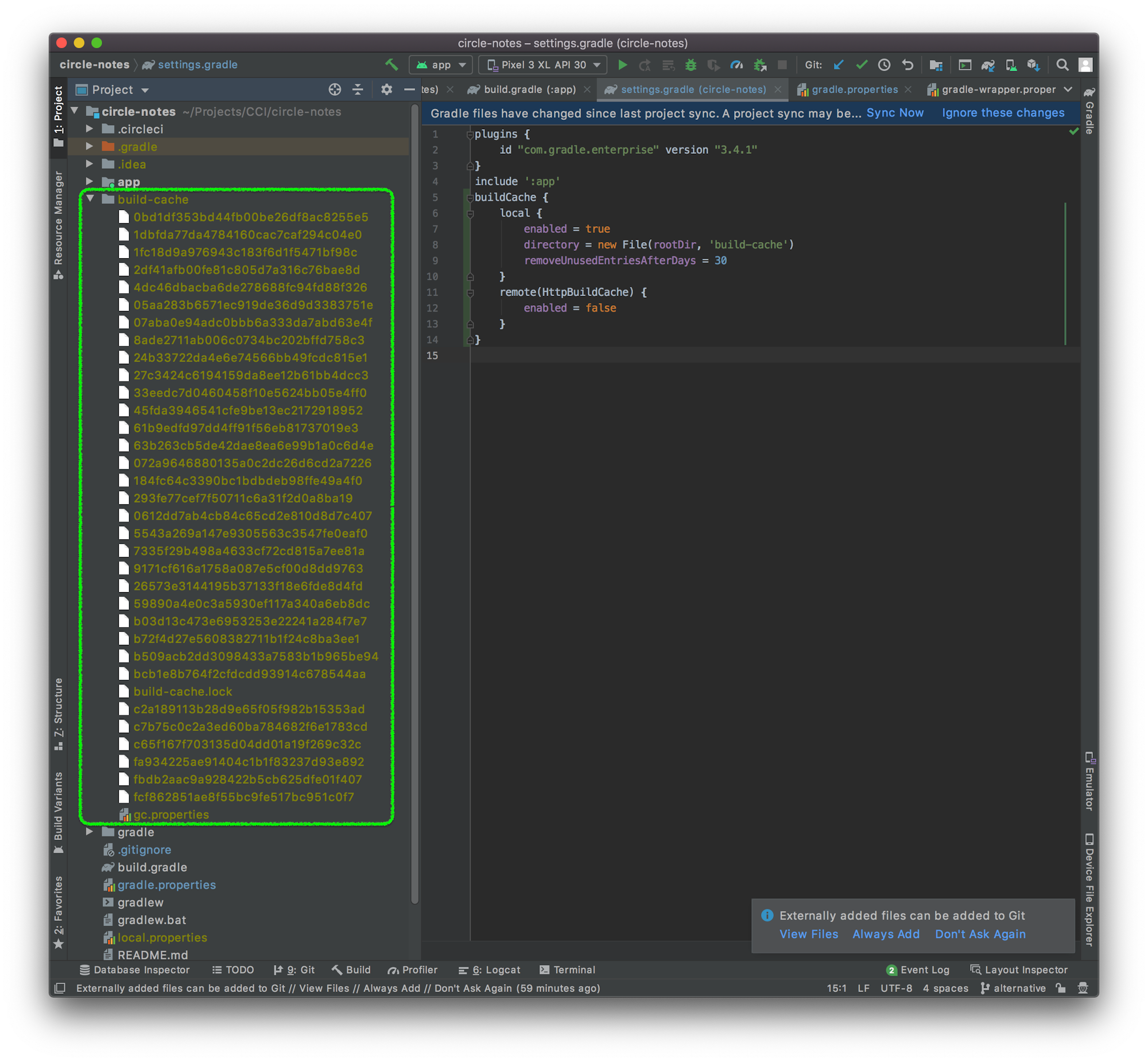 Add the build-cache folder to .gitignore. This addition prevents you from committing the artifacts to source control.

Add the following to .gitignore file:

Next, run the following sequences of steps on your local machine. These steps will make your build fully cacheable when locally run, no matter where the project is located: 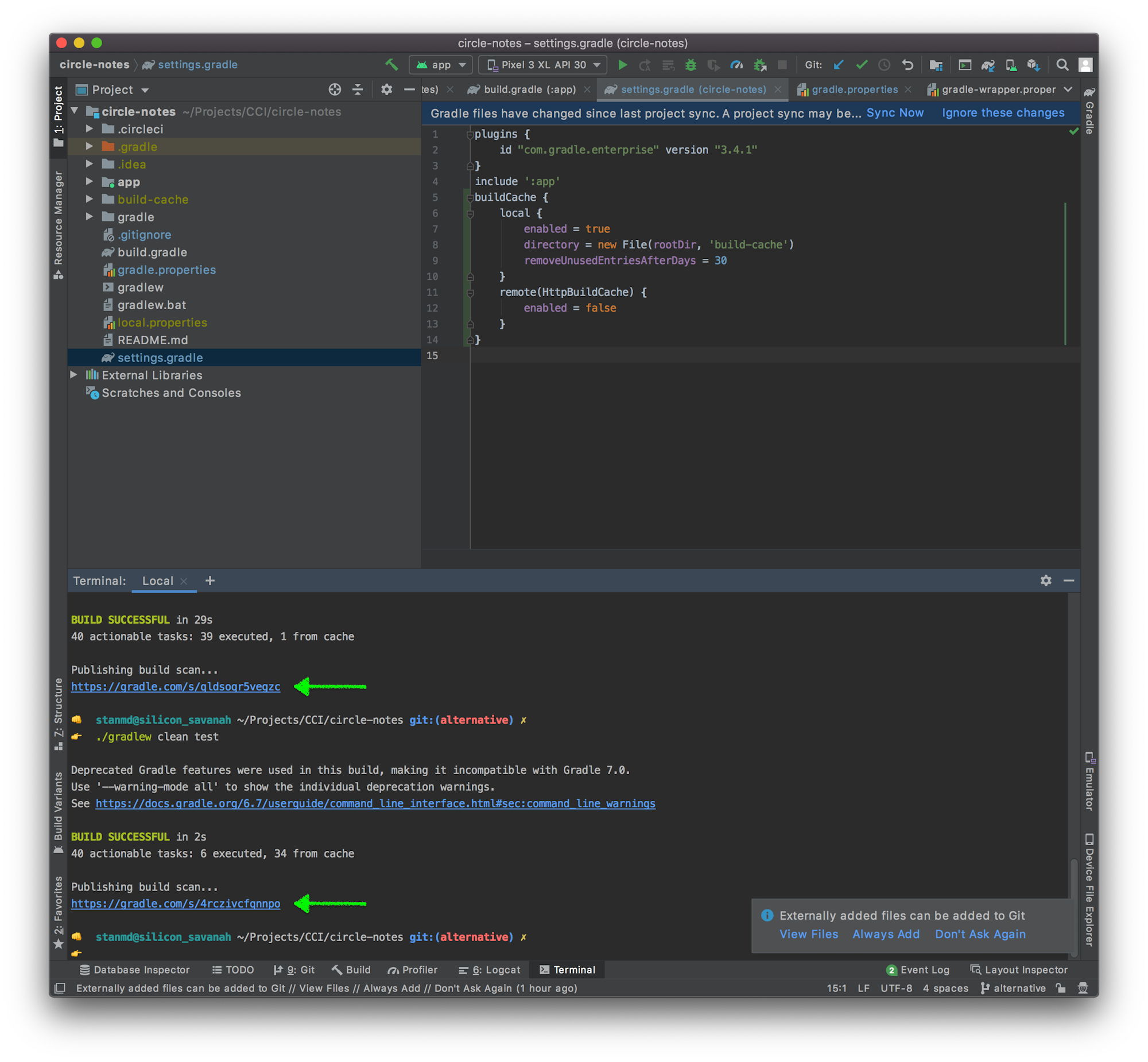 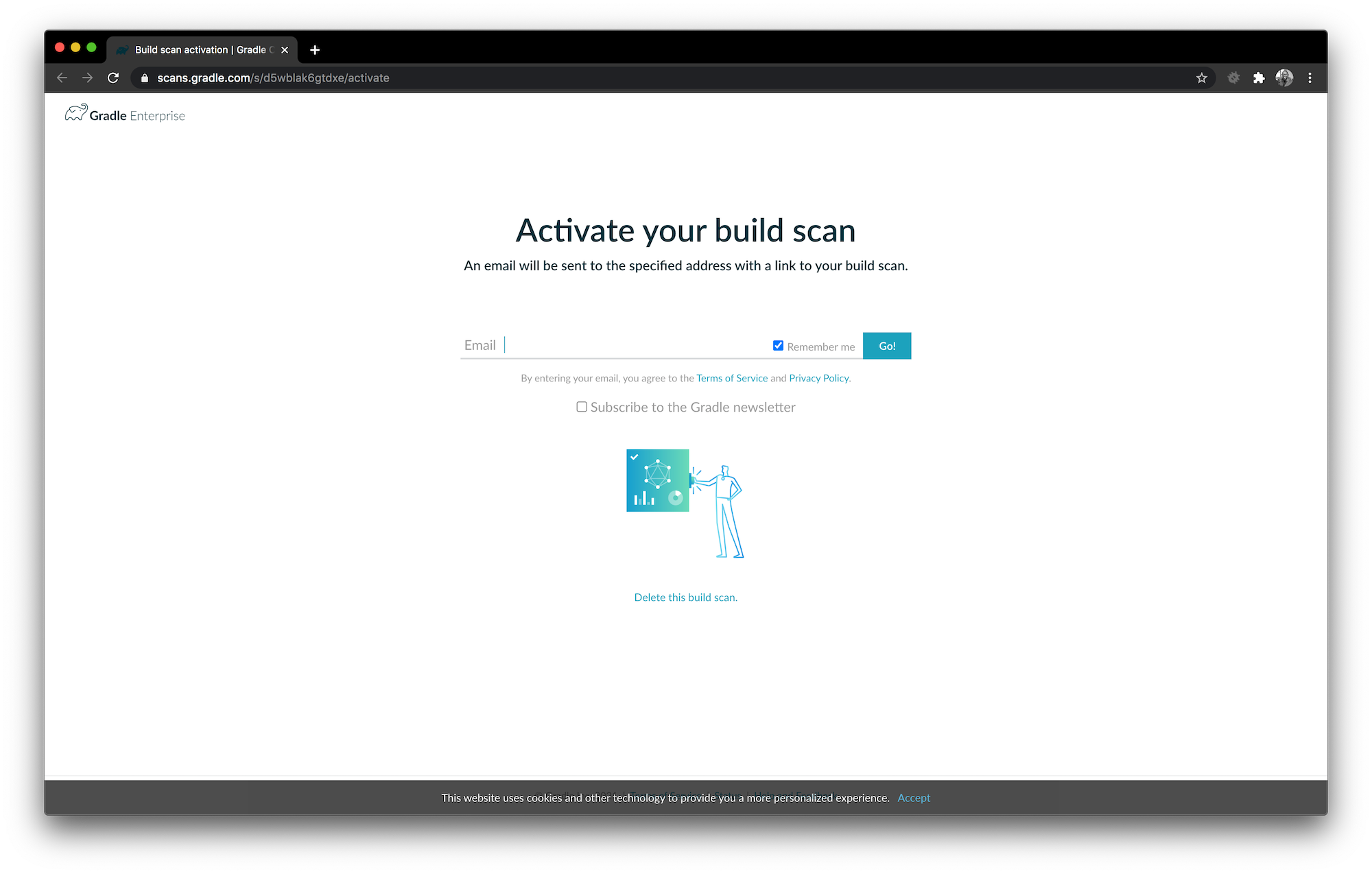 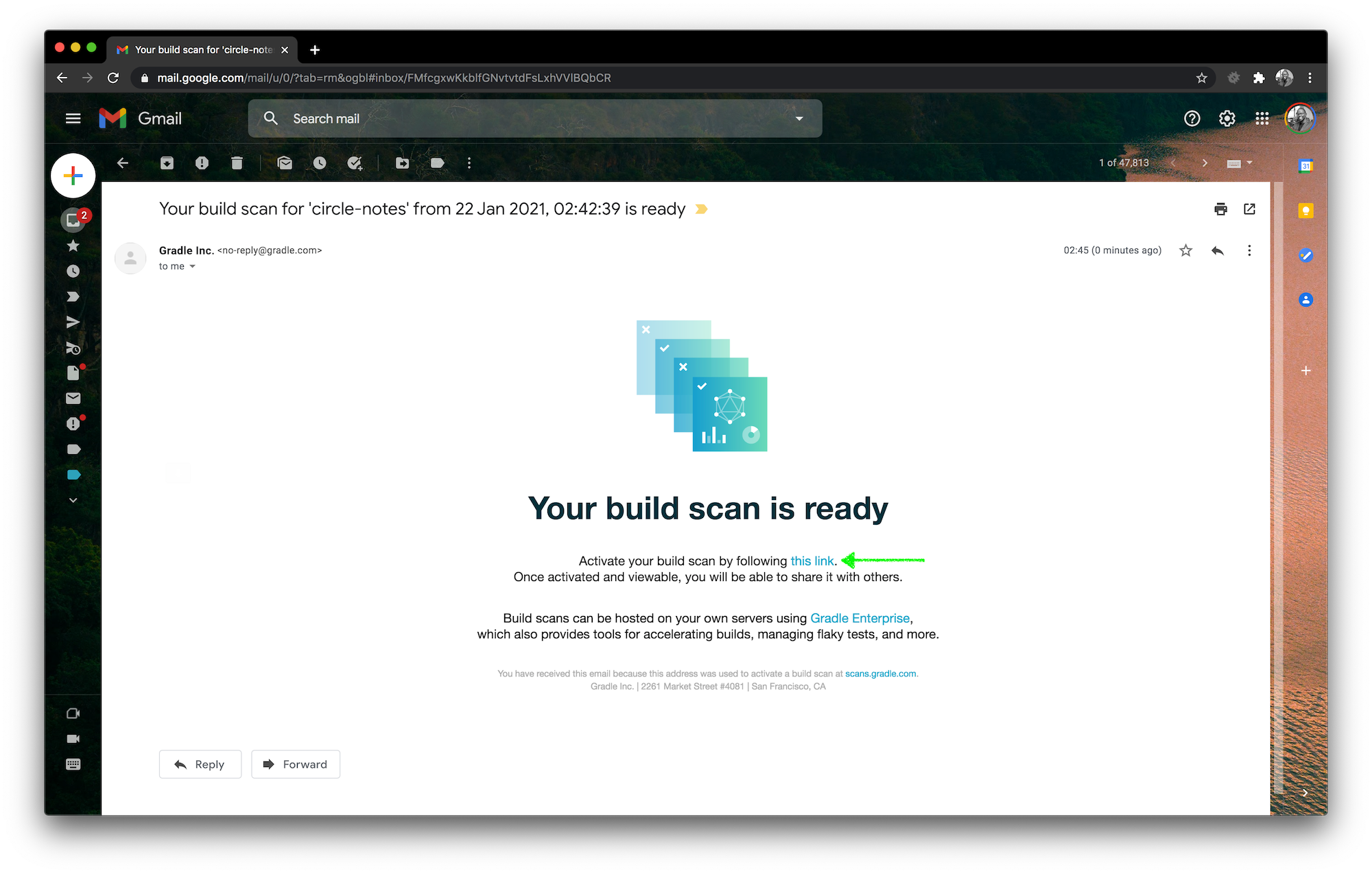 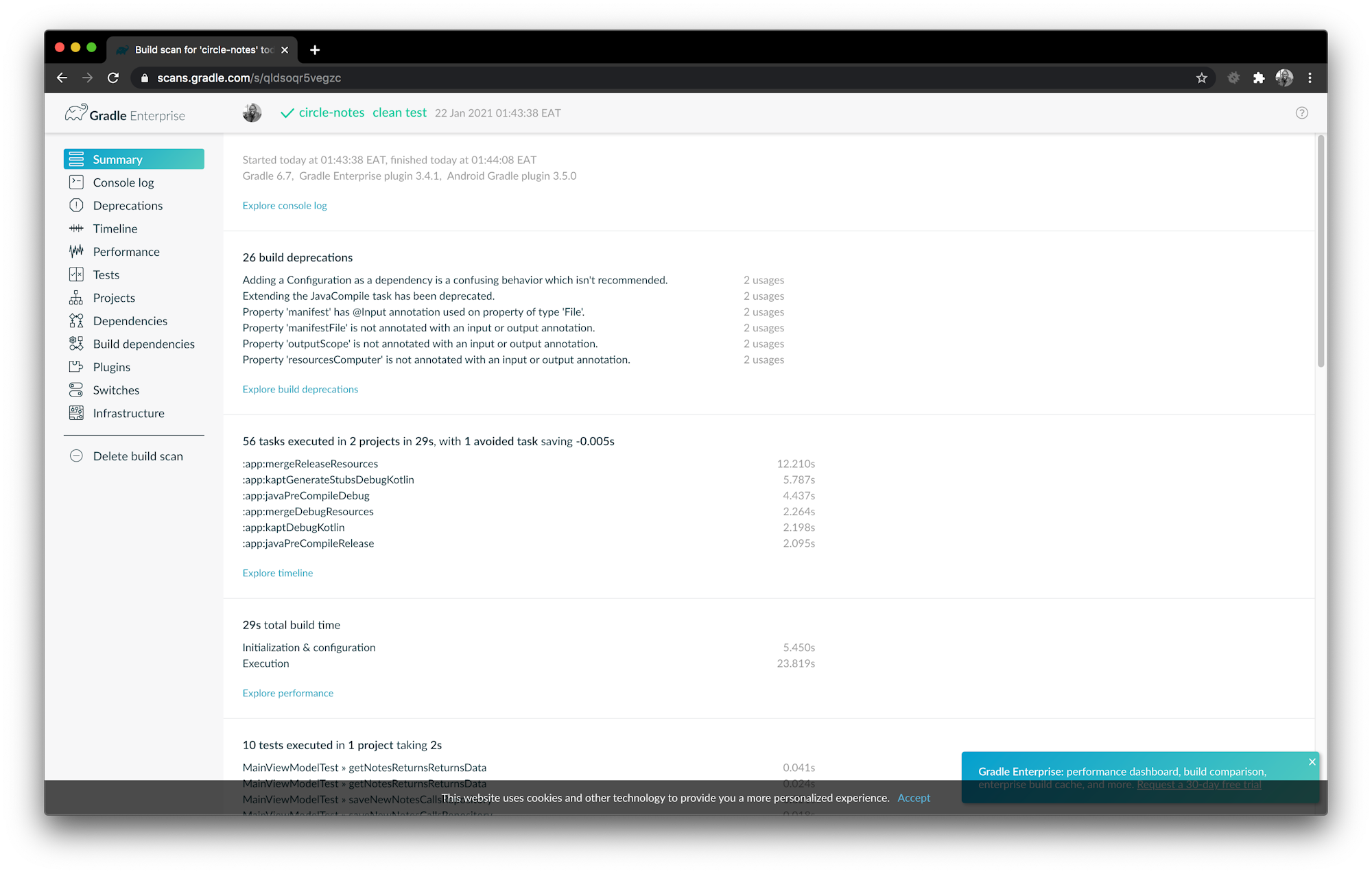 If you had already activated the build scans, the link from Android Studio will redirect you to a page without the “Activate your build scan” and “Email” steps.

Make sure caching is configured properly by reviewing the Build cache section of the Performance tab. 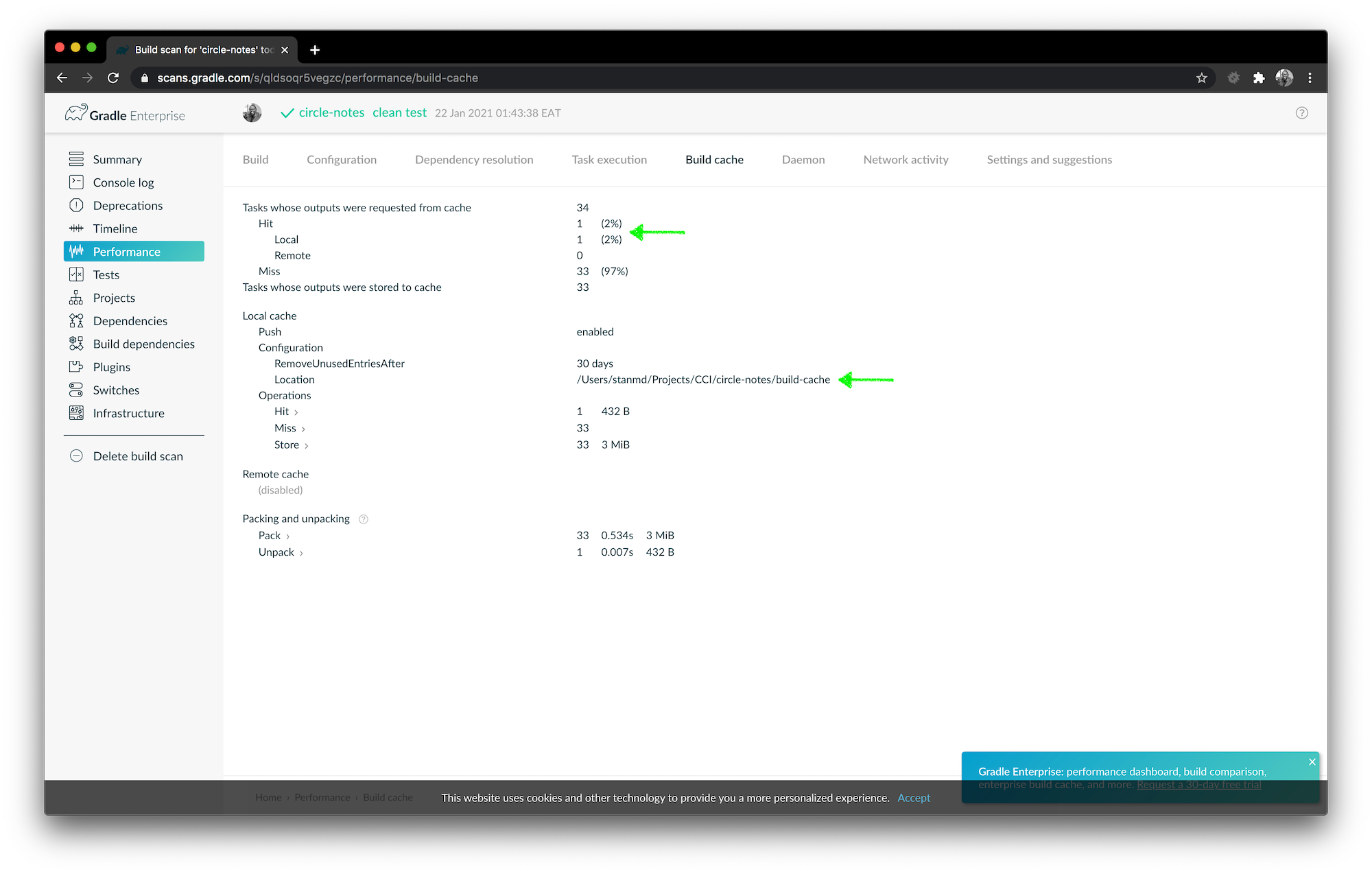 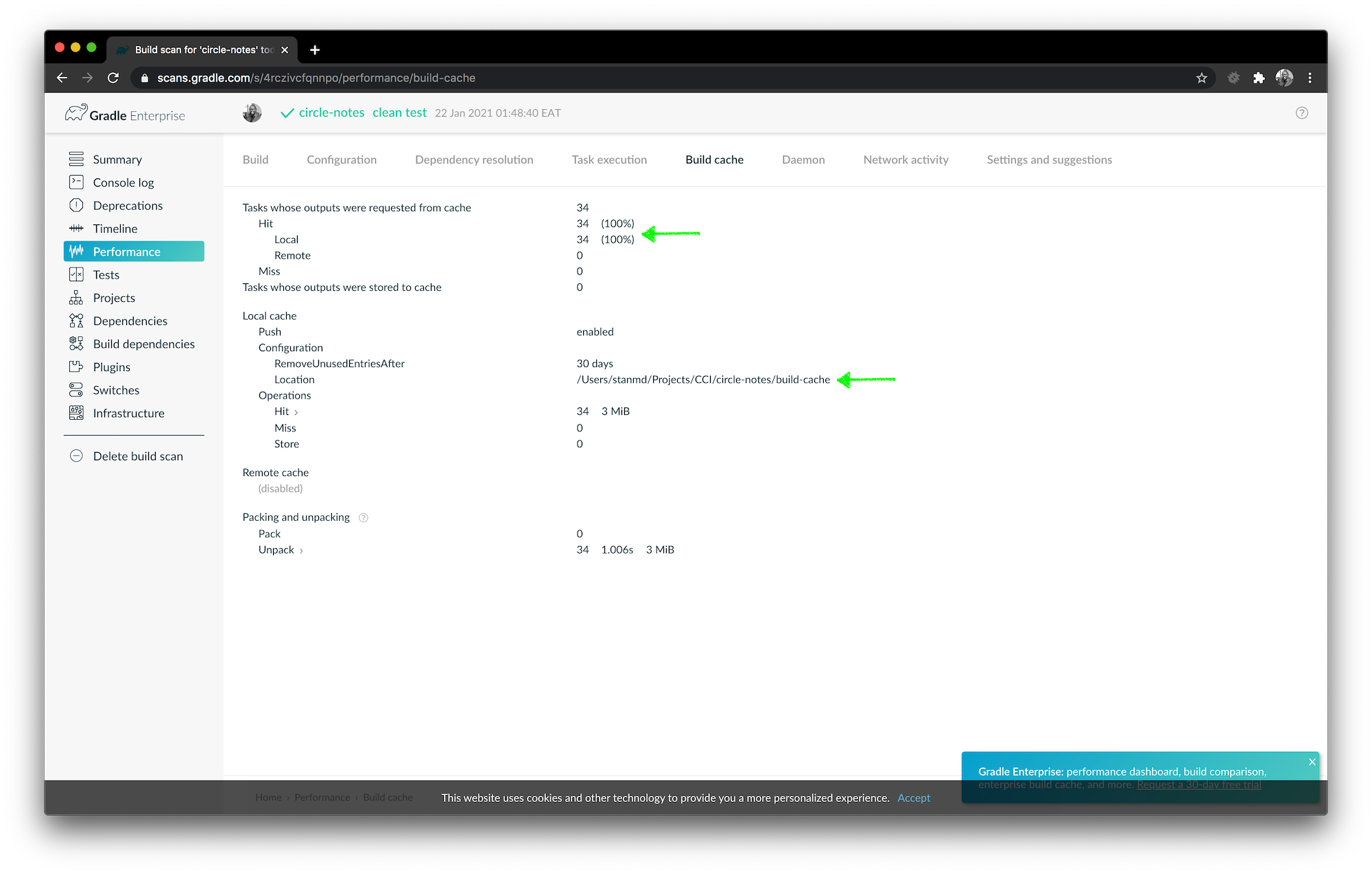 Note: Notice that the second link in the screenshot has 100% output requested from cache.

From the second build’s build scan, click Timeline. Make sure that no cacheable tasks did any work. To the end of the your build scan URL, add: 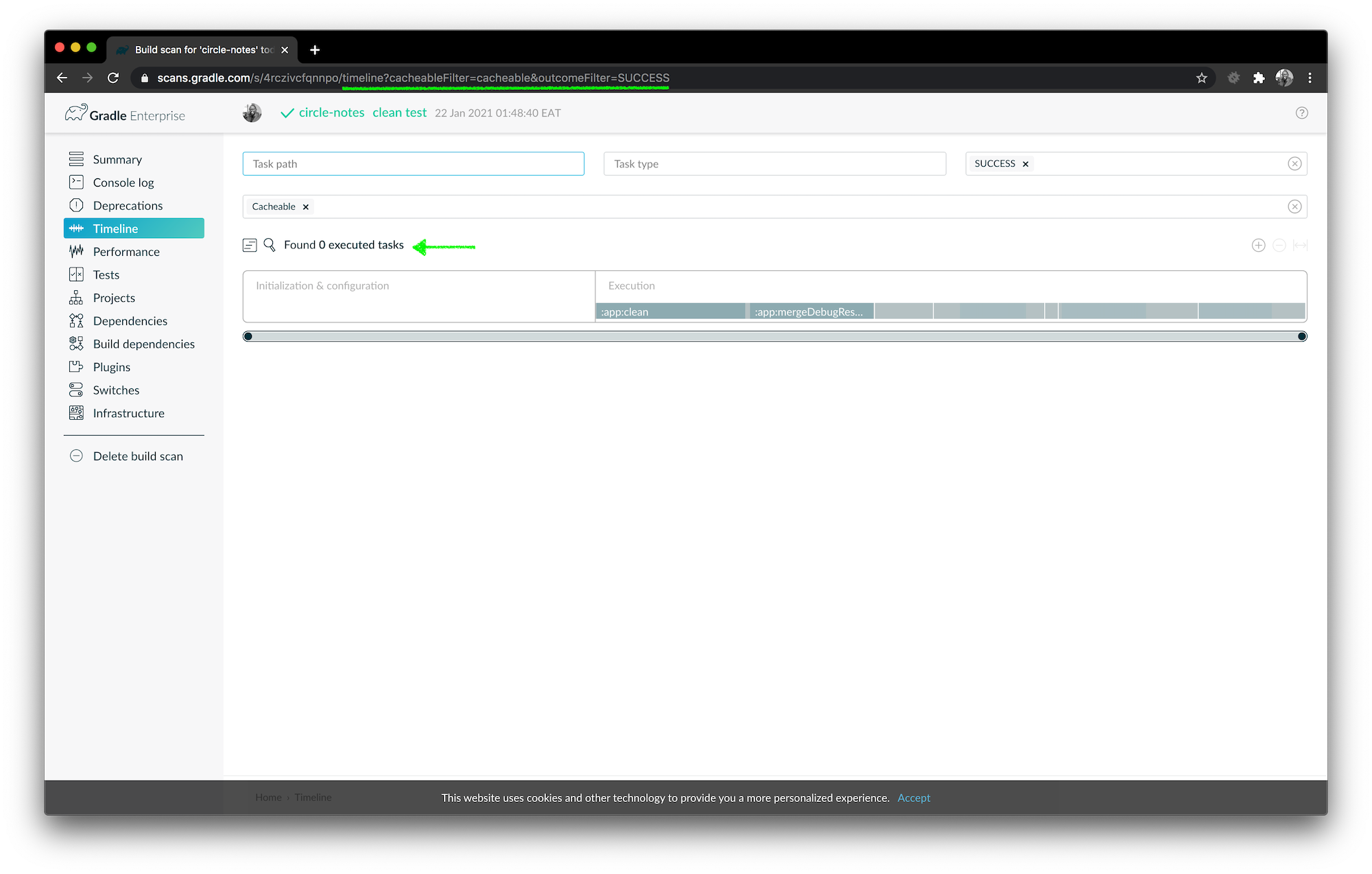 You can also observe build tasks that are not yet cacheable. To the end of the your build scan URL, add: 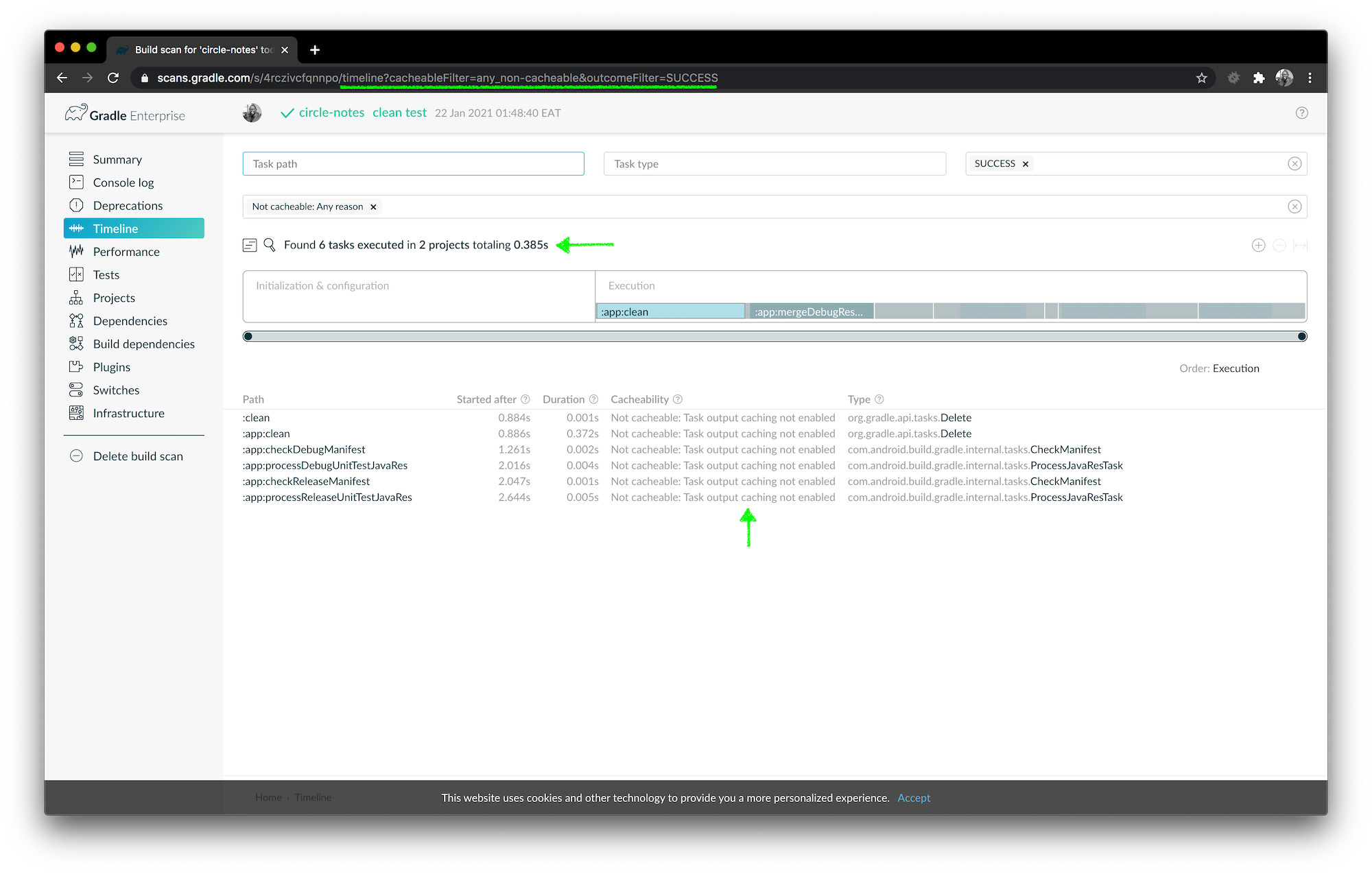 Update the contents of settings.gradle file:

This snippet enables our project to load artifacts from HttpBuildCache. Update the url (line 15) to your build cache node link by appending /cache/ to it. Please note the trailing slash. In this case, I have used the URL I shared earlier. 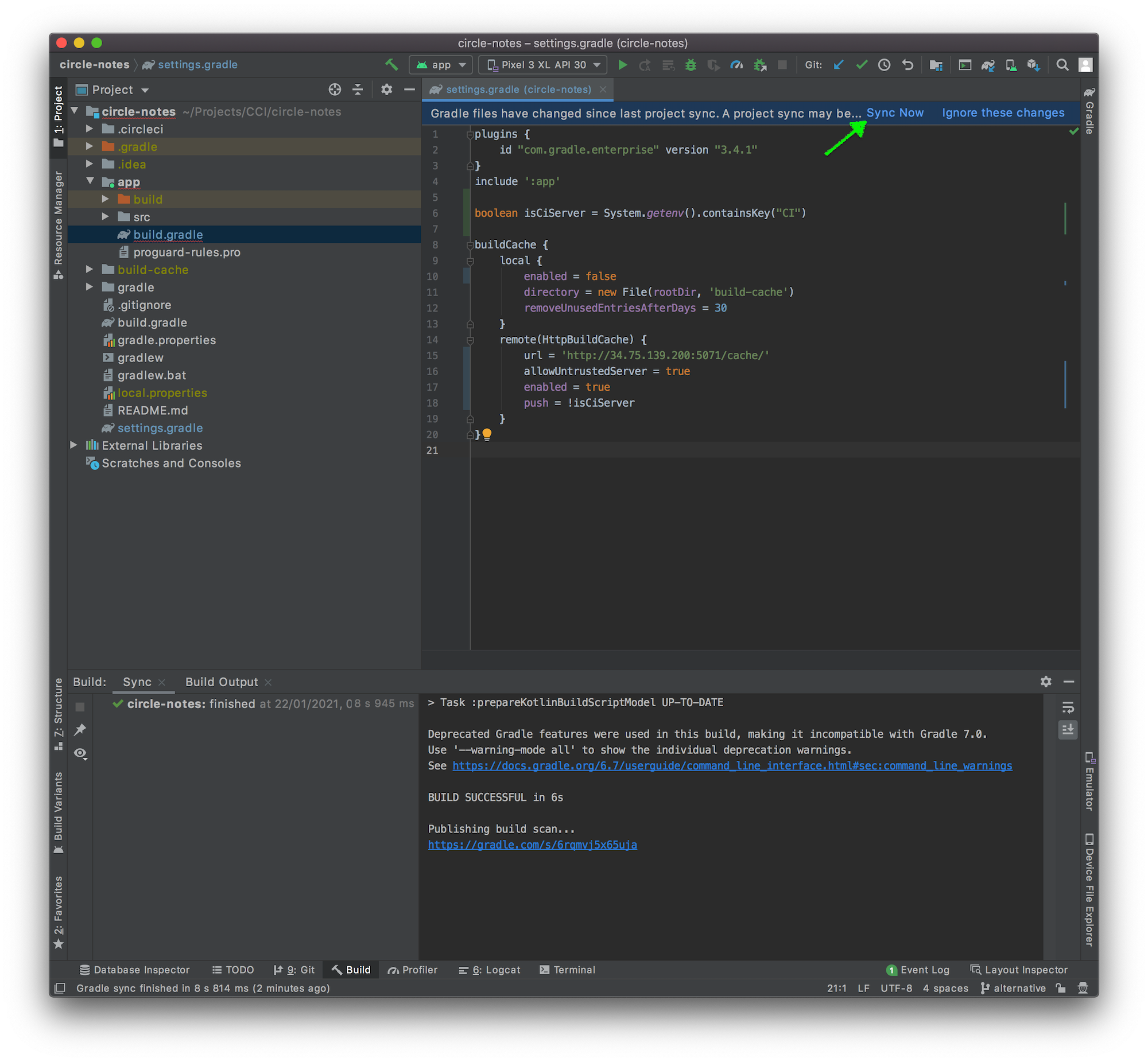 Run the next sequence of steps on your local machine. Completing these steps will make your build fully cacheable when it is run locally, no matter what the project location is. These steps are similar to what we did earlier for the local cache. 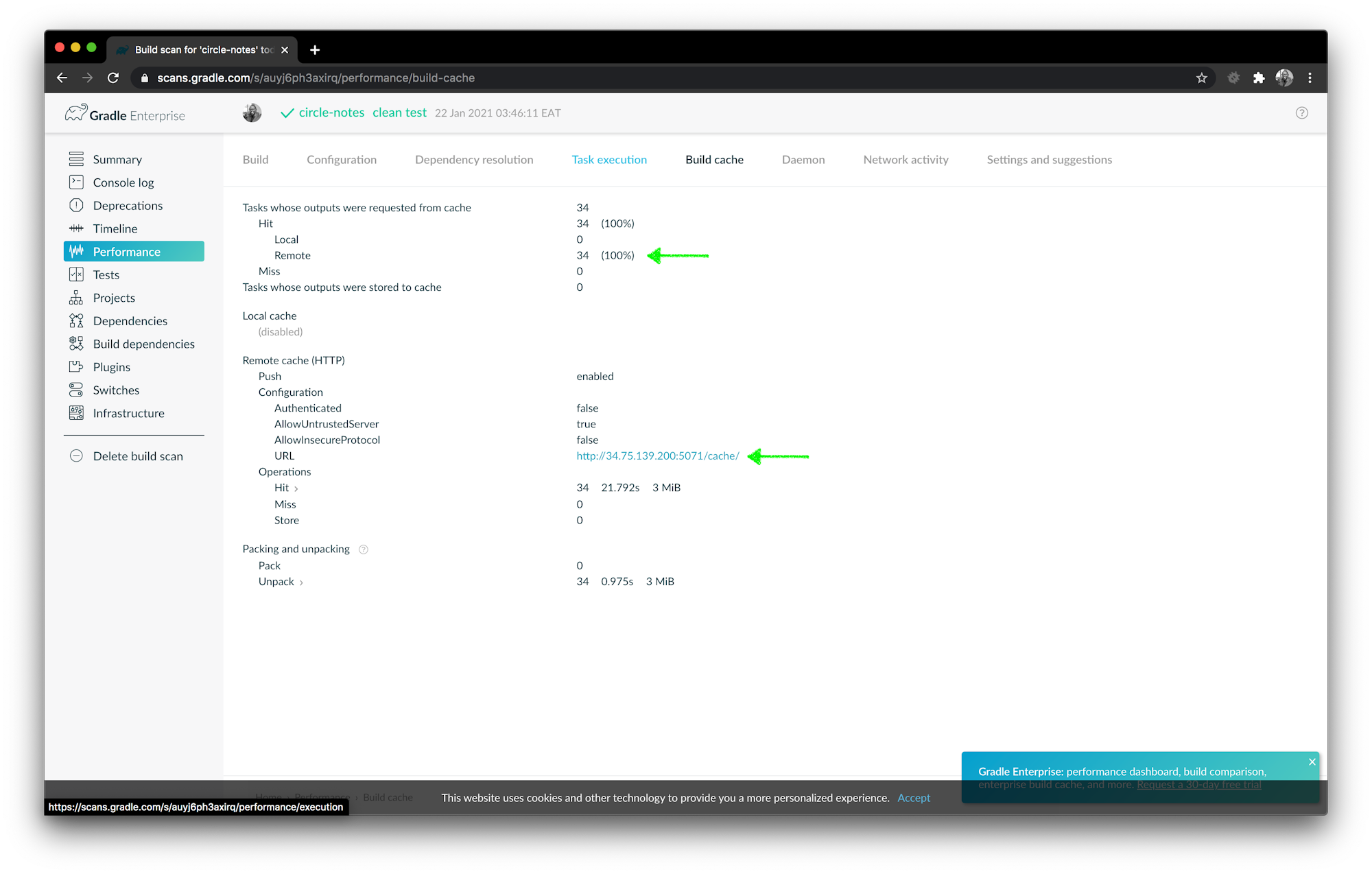 You have now confirmed that the remote build cache is working as expected. Congratulations!

Now, update the setup to make sure that it works as expected for CI builds. Because we have verified that we can push to the remote cache from a project locally, we should restrict such a push to a CI environment.

Setting up for CircleCI

Here is an updated settings.gradle file that demonstrates the recommended setup for the CI push use case:

Purge your remote build cache node so that there are no existing artifacts when we check that the CI push mechanism is working. 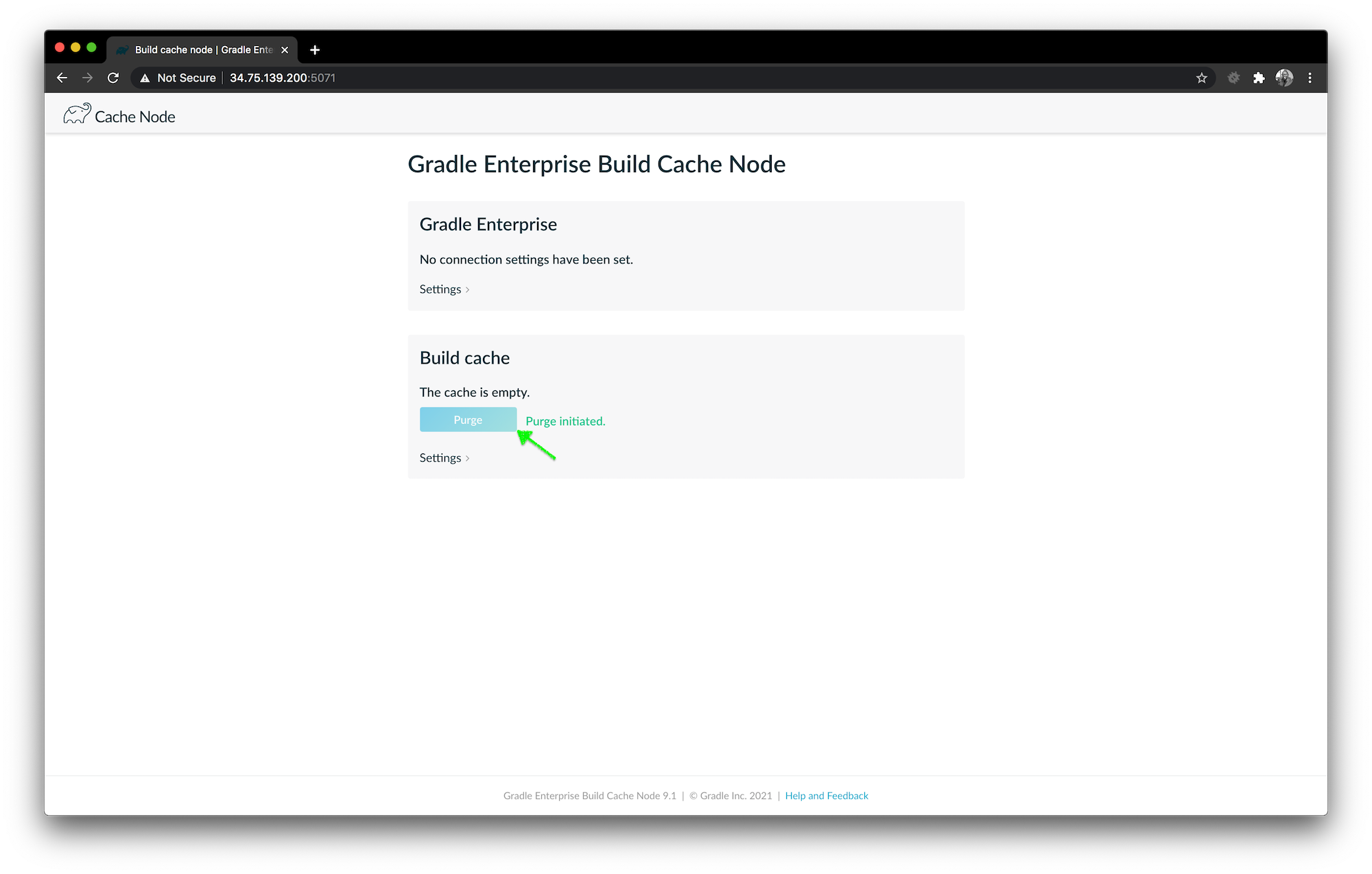 After you make the code changes, commit them to source control and push to your remote branch.

After a successful CI build, find the build scan on the Circle CI dashboard under the Run Tests job. 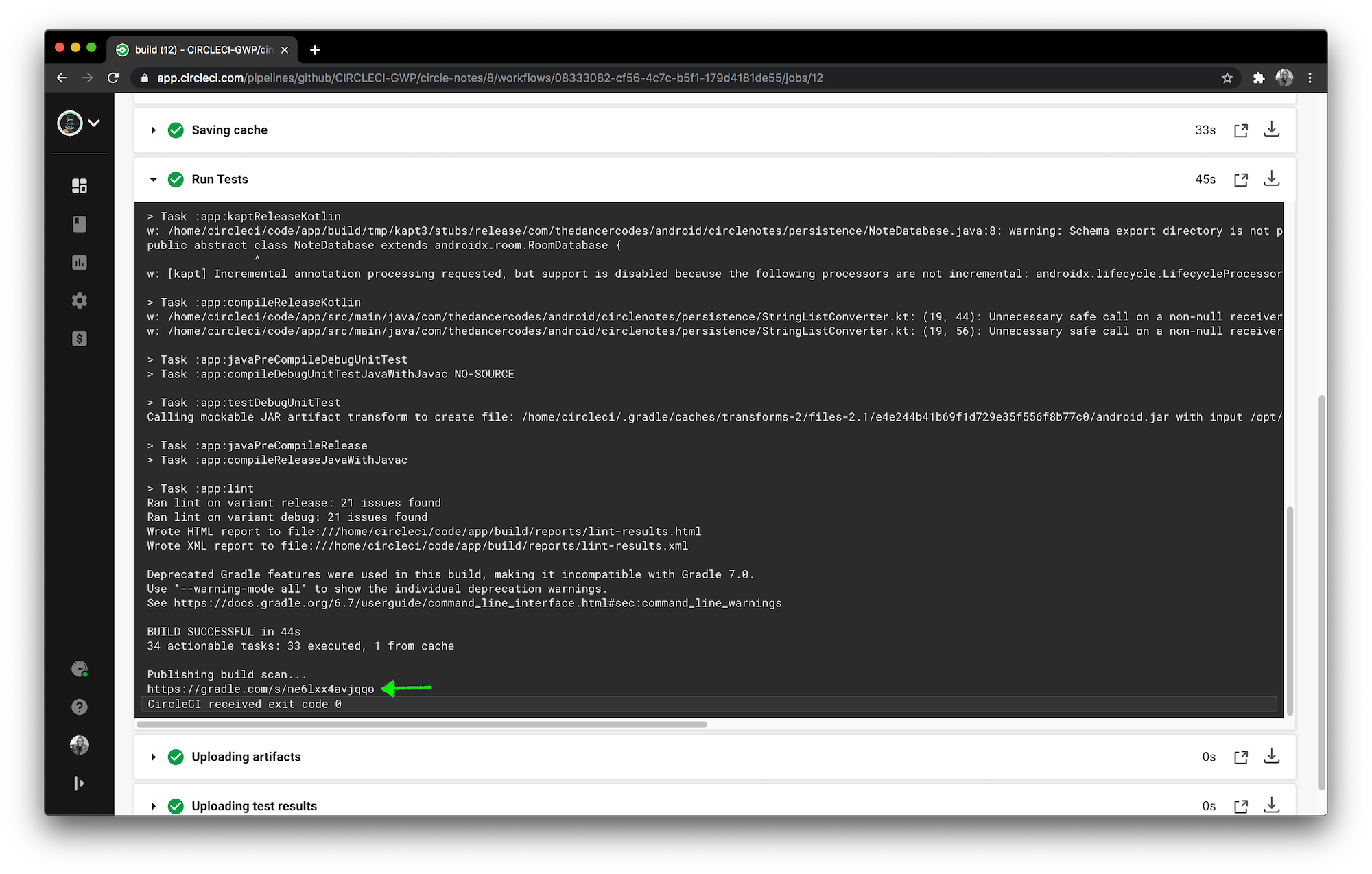 Open the build scan in your browser. On the Performance tab of the build scan, review the Build cache section to make sure caching is properly configured. 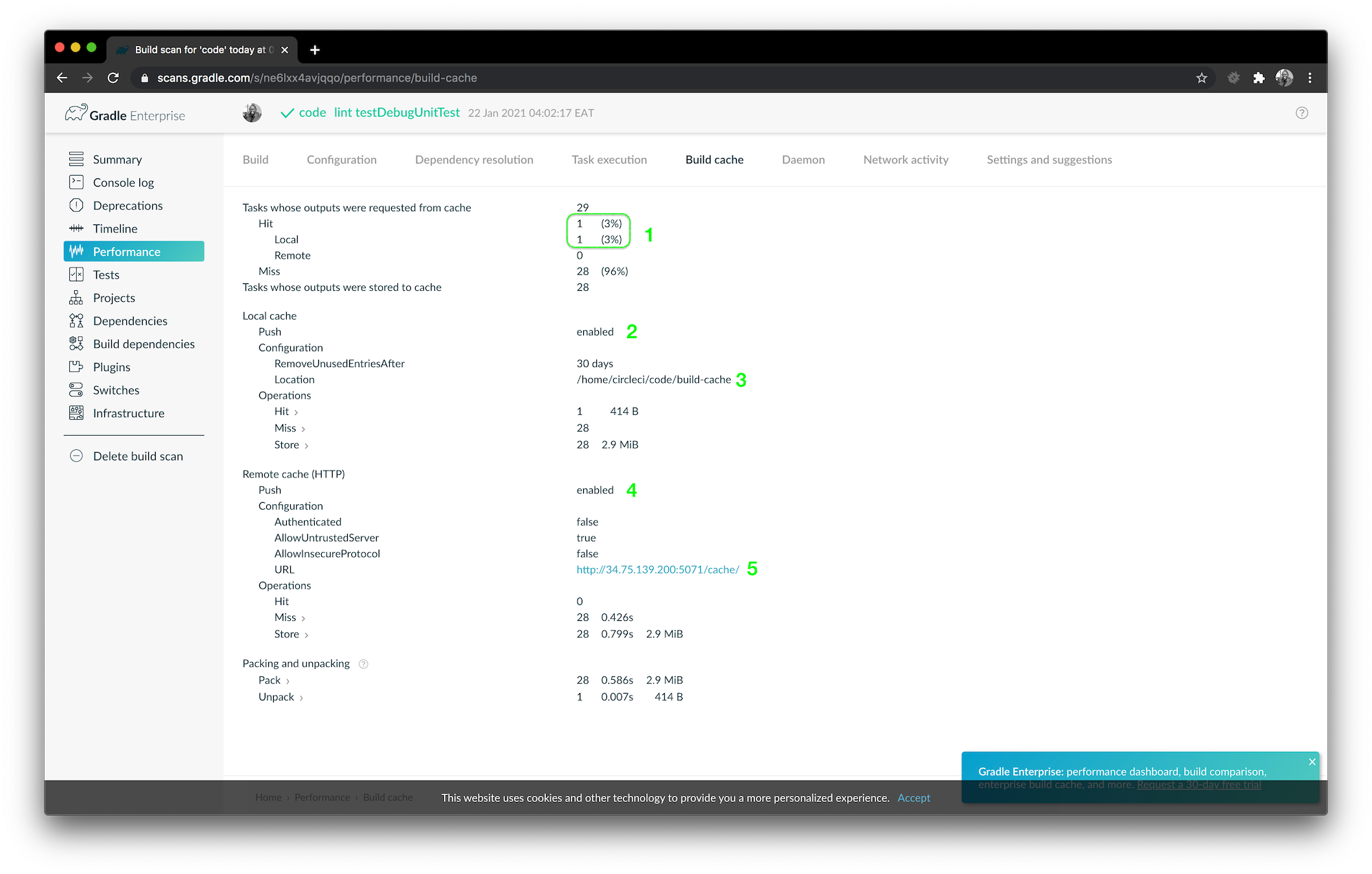 Here is a key to the items show on the previous screenshot.

Check the remote build cache node to make sure that the cache artifacts are being saved.

In this tutorial, you learned how to:

And with that, you are ready to meaningfully improve your build performance and increase developer productivity. For the next related tutorial, see Deploying your Gradle Build Cache Node using GCP or Using Gradle build scans in Android projects.

Taracha is a creator whose mission is to help companies solve complex problems in the simplest way possible. He cares about finding visions & causes that he is passionate about and using technology to help these companies solve their challenges.

He is currently a Senior Software Engineer at Premise Data where he champions the development and deployment of new product features & is particularly passionate about the Developer Productivity Engineering space.