This article focuses on CI/CD integration. Setting up the library itself for manual publishing is out of scope, but you will find some links to useful articles and guides about getting started.

You will need a few things to get the most from this article:

The sample library is a testing utility of mine released way back in 2016. The relevant parts are all in the Gradle build scripts and the CircleCI config: .circleci/config.yaml.

There are two modules:

Note: Testing a library on its own is somewhat difficult.

If you have not published libraries with Gradle to Maven Central before, this section is for you. If you have done this, you can skip to the next section.

You can find a complete example in my sample project on GitHub.

If you have everything set up manually, you should get ./gradlew assemble publish to work, which means you are all set. The manual release process also requires you to log in to Maven Central on the web, and you will need to manually close and release the staging repository that was created during the Gradle publish task.

Continuous deployment of libraries with Gradle

The process described in the previous section would, of course, work for a local publish. In the CI/CD environment this will be slightly different. Firstly, we do not want to perform all these manual tasks. I have used the Gradle Nexus Publish plugin instead, which builds on the maven-publish configuration and automates the last part of the release.

Secondly, we need to make sure that all keys are safely stored and accessible during the CI/CD process for signing. The correct versioning must also be put into place.

This Gradle plugin offers two new Gradle tasks to use instead of the existing publish Gradle task:

To include the plugin, add it to the project level build.gradle file:

In the example, the username and password values are my Sonatype OSSRH credentials, the same as for the web interface and Jira issue tracker. You can also create separate tokens in Sonatype OSSRH web UI if you don’t want to use your own credentials.

Note: Make sure to keep the ORG_GRADLE_PROJECT_ prefixes. Without the prefixes, lookup by findProperty in Gradle will not work.

The CI/CD pipeline for a library does a few things:

Setting up a CI/CD pipeline for releasing your libraries means your publishing process will still always work the same, no matter what happens to your developer machine, or who is doing the development. You will also keep safe any credentials or signing keys.

Setting up the signing keys is the most involved part of the process, so we should get started.

This means that in your library module’s build.gradle, you can use the useInMemoryPgpKeys function instead. This function takes a string-based signingKey instead of a keyring file. Both keys can be stored as Gradle properties or environment variables:

When you run the command to export the signing key, replace your_email@example.com with the email used to generate the key. You will be asked to provide the password you used when creating that signing key.

The first part of this command gpg --armor --export-secret-keys exports your key into an ASCII string. The awk command replaces any newline characters with \n, and the pbcopy stores it in your clipboard for pasting.

The exported key looks like this (note the plentiful lines of gibberish in the middle):

You can then paste it when creating a new CircleCI signing variable GPG_SIGNING_KEY in the project’s environment settings: 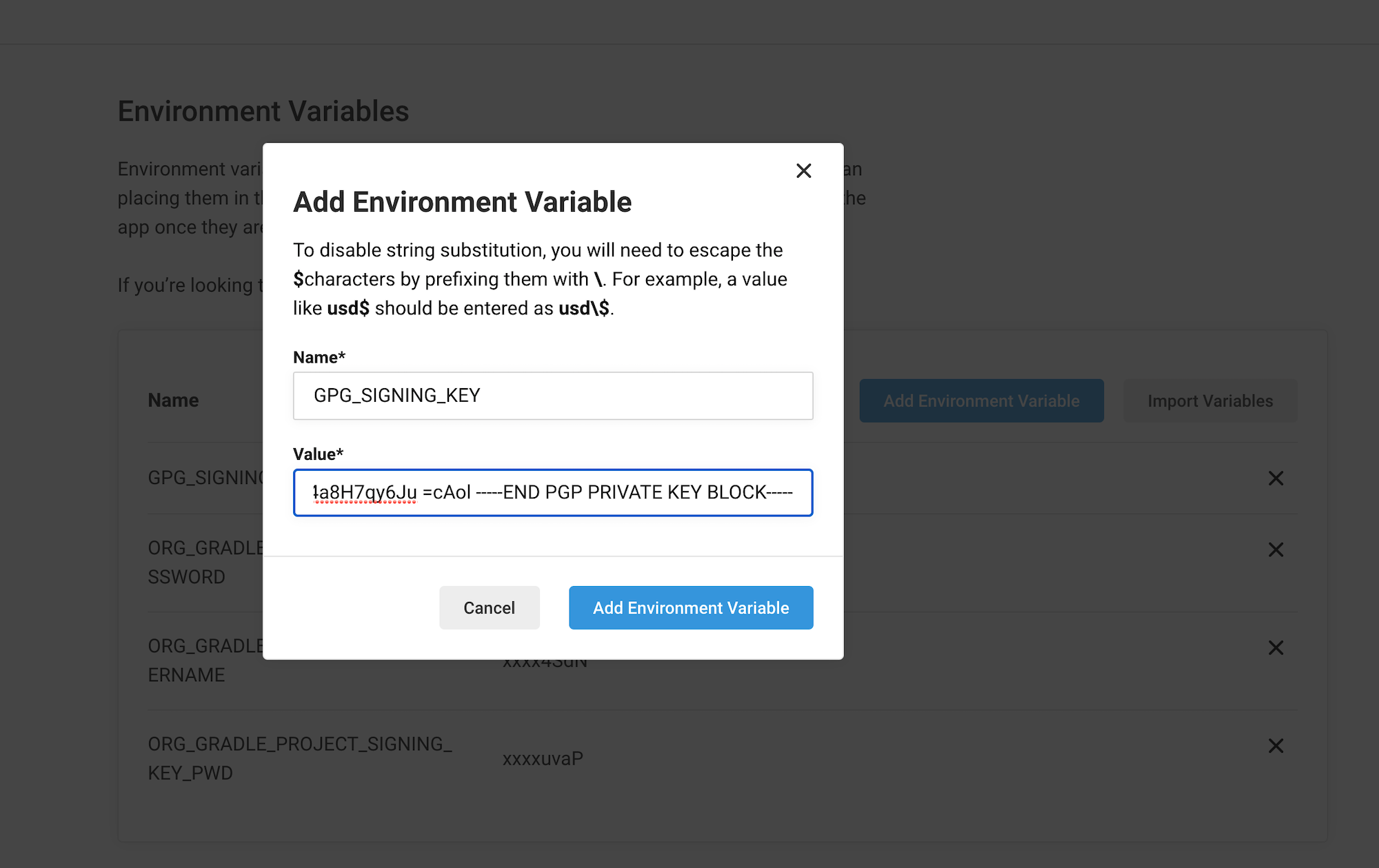 As for the key itself, I found that Gradle was not happy with it being stored as environment variable. I had to write it into gradle.properties before build time with this run call in .circleci/config.yml:

Versioning the library with Git tags

All projects in Maven Central need to be properly versioned. I like using Git tags to drive versioning, as we can create them from the command line and they are always tied to a commit.

For any tagged commit, CircleCI will surface the tag as the environment variable $CIRCLE_TAG. I used that tag to denote a release build’s version. For all other commits that are missing tags, I treat them as snapshot builds.

We will store it as another environment variable $ORG_GRADLE_PROJECT_LIBRARY_VERSION that can be picked up in Gradle. The way to make it available is to push any variables to $BASH_ENV in CircleCI’s run step.

This is the script I used. It either sets the current Git tag as an environment variable (for example 1.0.21), or if it is missing, uses the most recently used tag with -SNAPSHOT appended to it.

Publishing the artifacts to Sonatype OSSRH

The final step of publishing is to run the two Gradle publishing commands right after running assemble:

This deploys the library and all its artifacts using the Sonatype Staging plugin, and also releases it into production.

The full deployment job as in my .circleci/config.yml:

For CircleCI to run this job you need to do include it in a workflow.

It is best practice to set up the tests to run on every single commit, on any branch, but to proceed with deployment only when the commit is tagged like a version. That is what the filters stanza allows. In this case the deployment job only runs on versioned tags that begin with number and a period, like 1.something. That way you can still use tags for other purposes, but they will not trigger a release build.

I also added a hold-for-approval, which is an approval job that requires a manual confirmation before deploying the library. This is optional, but I find the manual step reassuring.

Snapshots are special types of releases that are faster to publish, and can be easily overridden, unlike regular, versioned releases, which cannot be overridden. This makes snapshots useful for testing new versions of the library.

To release a snapshot all you need to do is append -SNAPSHOT to the end of the version string. That procedure is covered in the versioning section of this article. I have set my snapshot deployment pipeline so that the library is built each night at midnight UTC, using CircleCI’s scheduled triggers feature:

In this article, I covered how to set up a continuous deployment pipeline for an Android or Java library to Maven Central with Gradle. You have learned how to set up the secrets for signing the library, version the library using Git tags, and automatically publish the library each time a new tag is published. I hope you find this useful for your own projects.

If you have any feedback or suggestions for what topics I should cover next, contact me on Twitter - @zmarkan.

Building a React dashboard to visualize workflow and job events