In this tutorial, I will demonstrate how to use automated tests to check vulnerable application entry points for database injection attacks.

To begin the exercise, you will need to clone the demo project. The project is a simple Node.js user accounts API application with the following endpoints:

This project runs on a SQLite database that stores data in memory (for demo purposes) and contains a single table, named users.

Clone the project by running the following command:

Once the cloning process is complete, go into the root of the project and install the dependencies by running the commands below:

Next, run the application with this command:

The application will start listening on a default port of 3000. Open Postman and add some users using the http://localhost:3000/users/create endpoint. ( You can only create a single user at a time.) 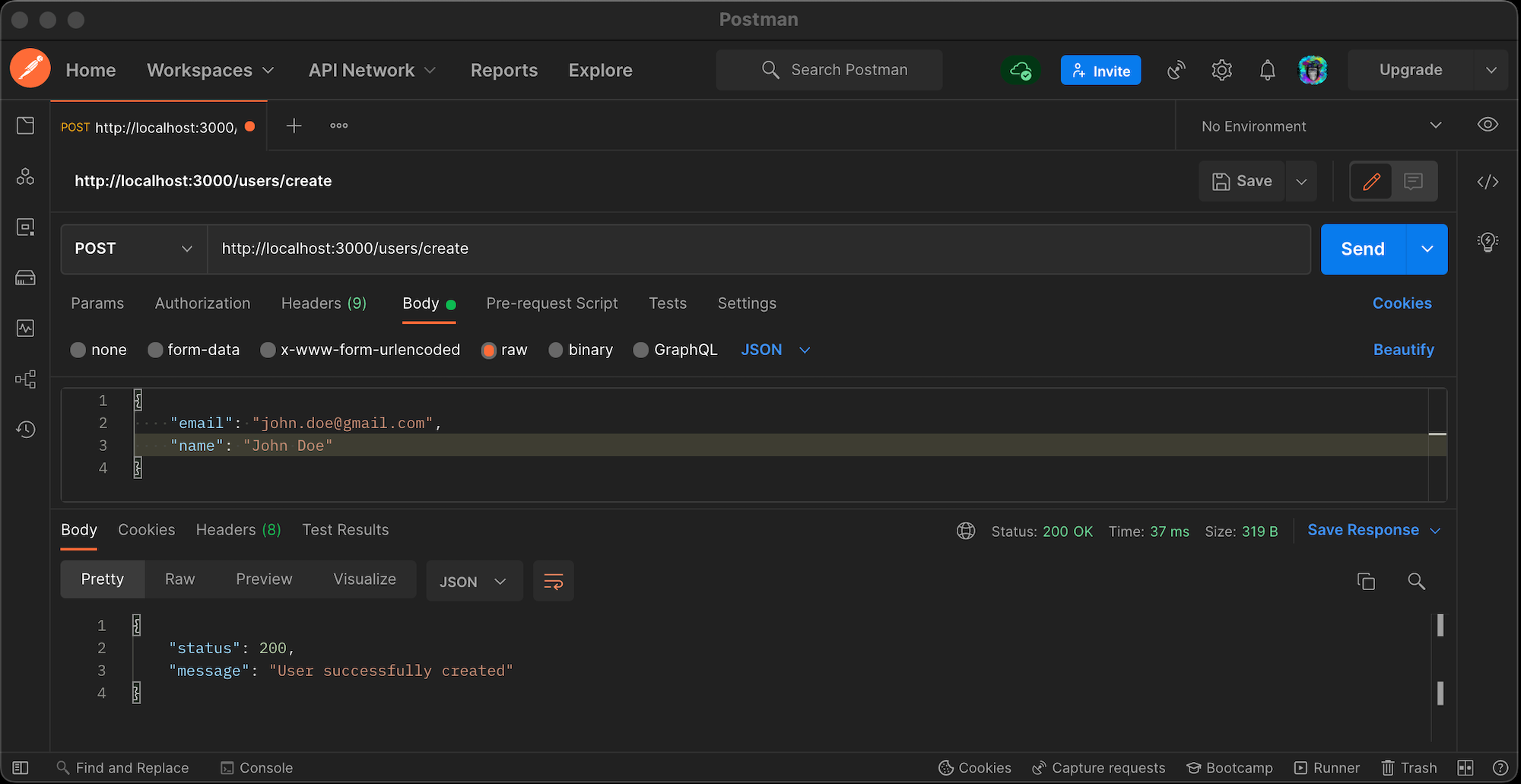 Fetch the users by making a GET call to the http://localhost:3000/users/fetch endpoint. 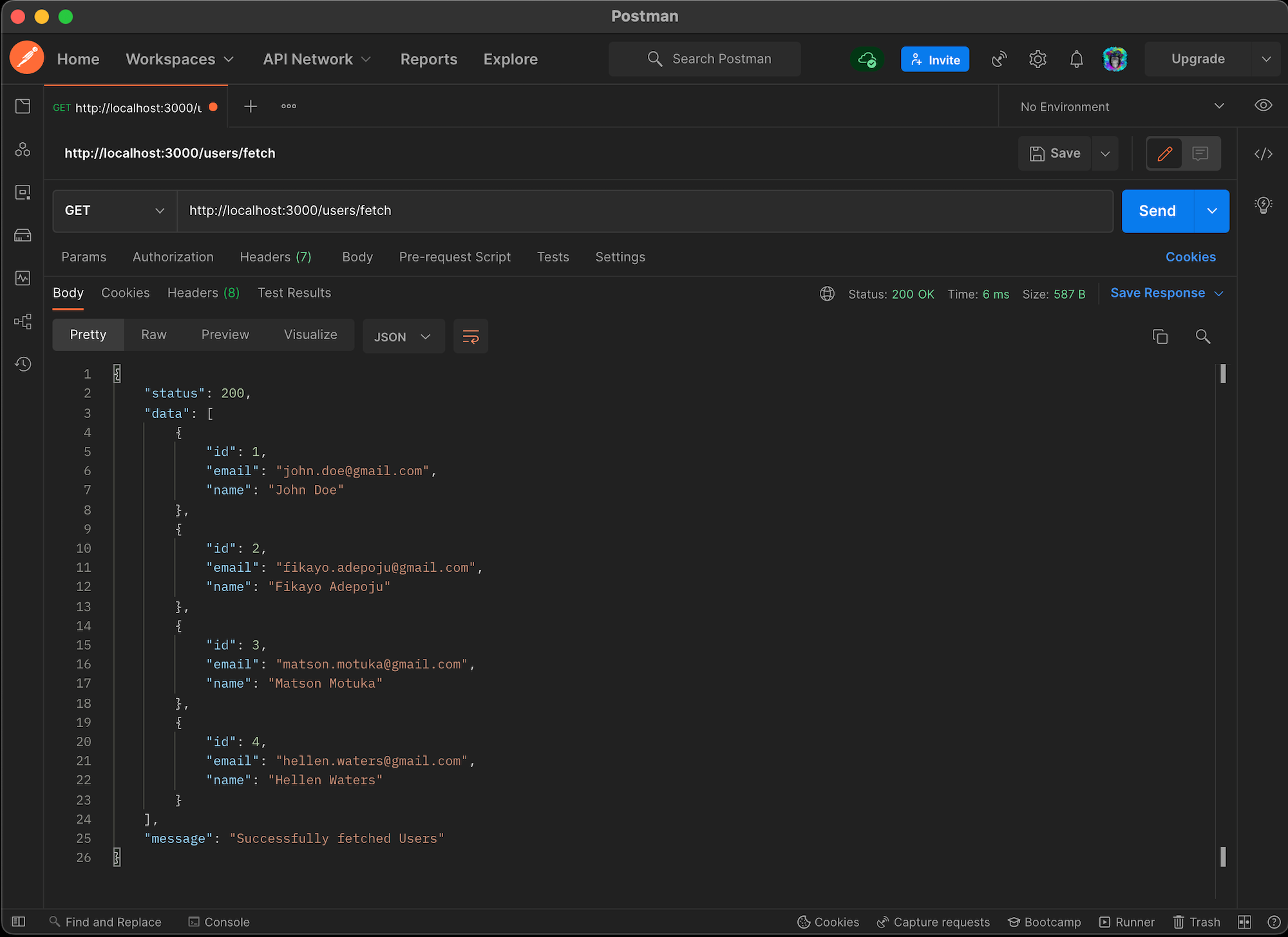 You can also send an id parameter for the first user by calling the POST endpoint of /users/fetch to retrieve the user. 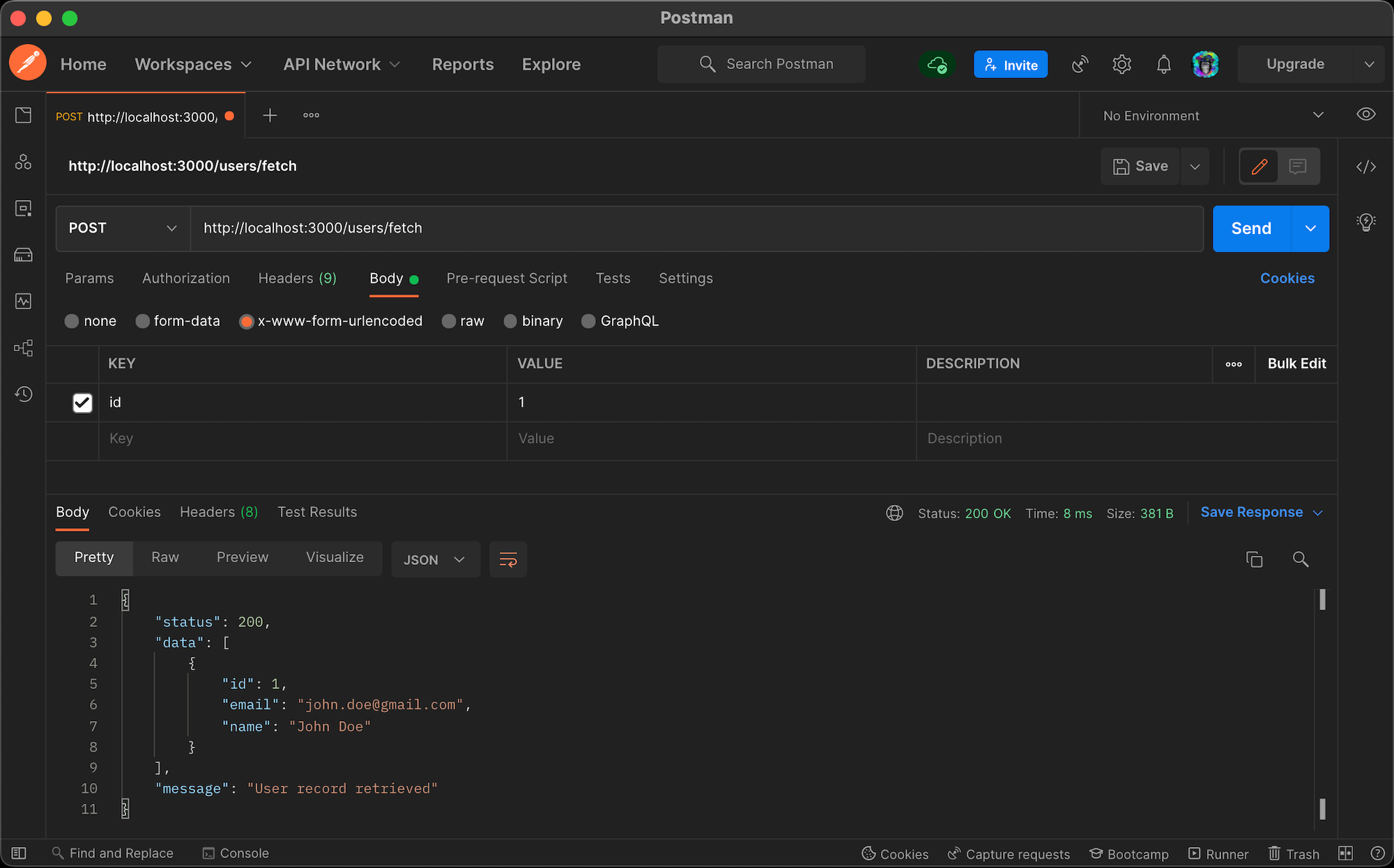 Both handlers run SQL queries that directly take in user data from the request object. We can attack one of these endpoints to expose its SQL injection vulnerability.

We would be testing the POST : http://localhost:3000/users/fetch endpoint which is supposed to take the id of a specific user and return just that user in a data array. We would use a well crafted SQL injection attack that will attack this endpoint causing it to expose the data for all users in the database.

Once this installation is done, create a folder __tests__ and within this folder, create the file injection.test.js. Add the following code:

This test case begins by creating the users table and seeding it with 3 test users. It then crafts a malicious user id that intercepts the SQL query and injects a condition that will always be true. This is an alternative to the condition that restricts the result to just the user with the id. The result is that the query returns all the users in the users table.

We can test result of the API call to make sure it does not contain more than one record. With 3 users already in the table, if the request returns more than 1 result, it will fail, which indicates that the attack was successful.

To complete the test setup, add a test script to package.json:

Now you can run the test by running the following code at the root of the project:

Once the test runs, you will get a failed result. 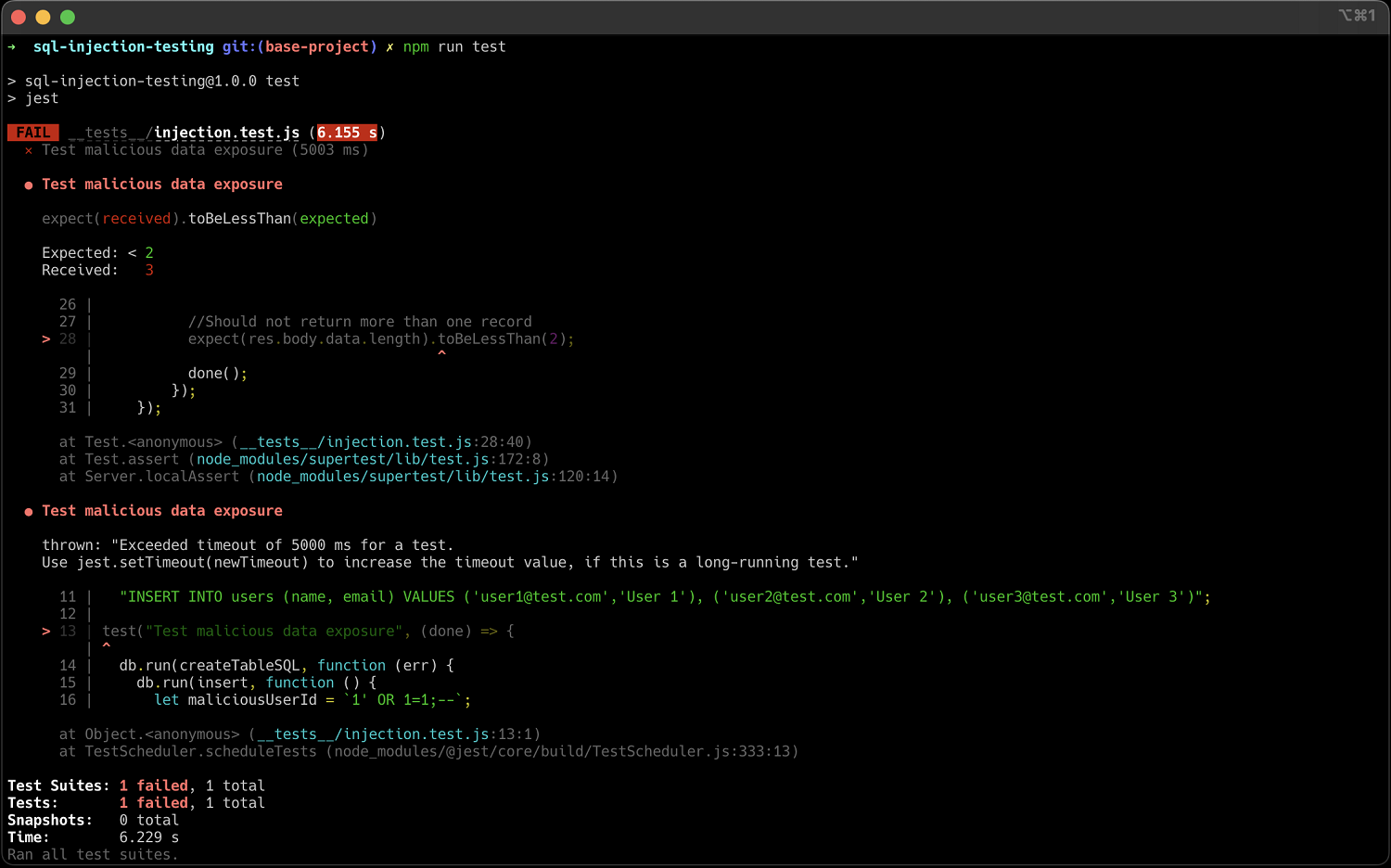 Instead of returning a single value or none at all if there is no match, the injection attack was able to successfully force the database to expose more than 2 users contained in the table. This kind of attack is a dangerous way for malicious users to expose sensitive or private data in your database tables like phone numbers, account numbers, and credit card information.

So, how can this be fixed? SQL injection is usually fixed by tweaking your code to check for conditions to validate data coming from users accessing your application. In the above case for example, we can try checking that the value submitted by the user it is an integer, because ids are stored as integers. Any malicious SQL will not pass that check because they are strings and not integers.

However, even though the strategy works to fix the loophole in the POST : http://localhost:3000/users/fetch endpoint, there is another recommended best practise for processing SQL statements in our applications: the SQL command in the getUser handler.

It is considered generally unsafe to directly pass user-inputed values directly into our SQL queries. We can instead use placeholders in our queries that map to a set of values defined in an array or object. Most database drivers and Object Relational Mappers (ORMS) provide this functionality. For our endpoint, replace the getUser code handler in the users.js file with this piece of code:

The updated handler uses the placeholder ? in our query, then passes an array as the second argument to db.all(), which contains the id for the user. When you rerun the test you will get a passing result.

Our test now passes because the malicious code is converted into a non-harmful string that does not match any user id. No user is returned, keeping our data safe from unwanted exposure.

The aim of this tutorial is not only to run SQL injection tests. We want to automate the entire process so that anytime updates are pushed to the code, these tests run to ensure that our data is fully protected.

To automate the running of the SQL injection tests, the first step is to push the project to GitHub.

Now, click the Setup Project button on the CircleCI dashboard. 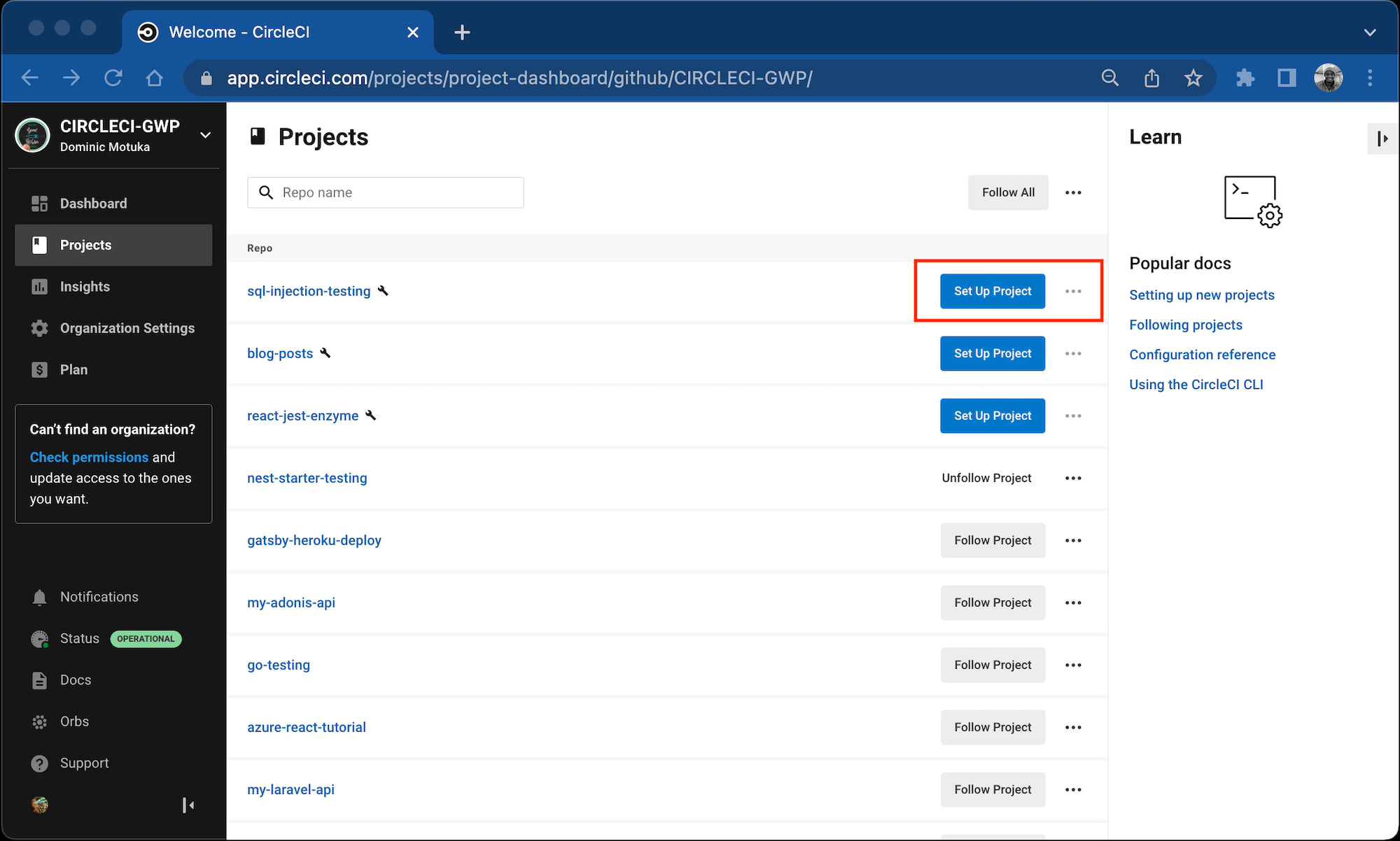 By defining a configuration file named .circleci/config.yml (you may need to specify the branch), CircleCI automatically detects it. You can click Setup Project to start the build. This build will fail because you have not set up your configuration file yet, this is our next step.

Create a folder named .circleci at the root of the project and add a configuration file named config.yml inside the folder you just created. In this file, enter this code:

In the build-and-test job, we have steps to checkout/pull the latest code changes, install packages and run the test suite.

Note: The node/install-packages step is predefined in the Node.js orb.

Commit all changes and push to the remote repository to run the build pipeline. You should get a successful build.

By clicking the build, you can review the test details. 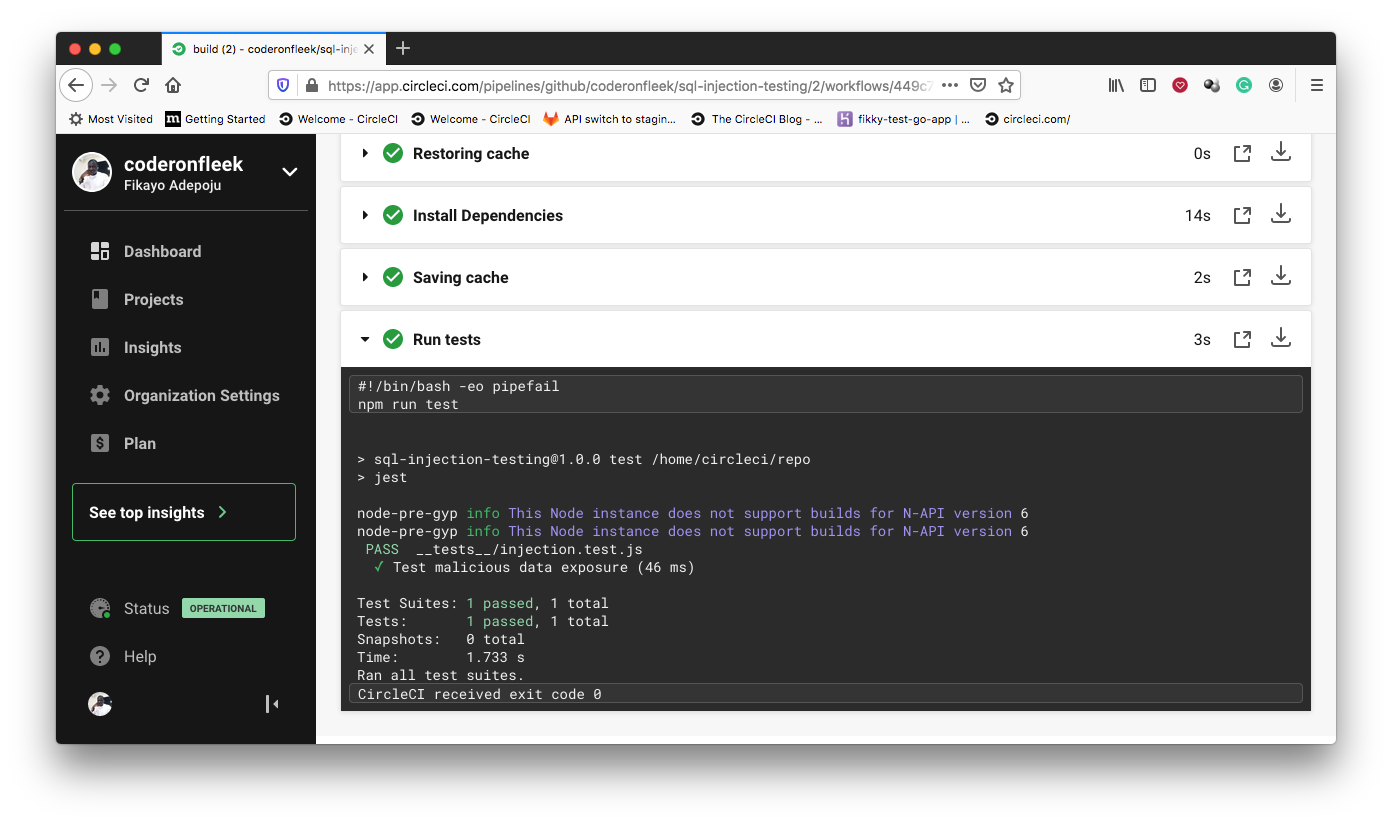 You can click an individual step to get more details.

The tests have passed as expected and we now have an automated pipeline for testing SQL injection attacks.

The database is the heart and soul of all data-driven applications (almost all of them these days). Any attack on the database cannot be tolerated, so thoroughly testing the application code for SQL injection attacks is a requirement. In this tutorial, we have demonstrated creating a simple injection test for an exposed endpoint and automating the testing process. It will be well worth your time to apply what you have learned to other projects your team is working on.