Rust is a powerful language built on the promise of performance and reliability. With no runtime or garbage collector, it easily runs in any environment and can be integrated into any existing language or framework. With the advent of WebAssembly. Rust has become even more valued in the web development space. Rust’s seamless peering with Node.js to build highly performant functionalities has made it a delight for web developers. Many web developers would rather write Rust than have to learn/write C++ or C for WebAssembly integrations.

To follow along with the tutorial, a few things are required:

With all these installed and set up, it is time to begin the tutorial.

If you have already installed Rust before starting this project, make sure you run rustup update so your current installation is compatible. To begin, create a new Rust application by running this command:

This command quickly scaffolds a barebones Rust application inside the rust-testing folder. You will build a simple CLI application that prompts the user for a name and prints a greeting message back to the CLI.

Locate the file src/main.rs and replace its content with this code:

In the code above, a build_message function is defined which takes in a name argument of type String and returns a greeting message constructed using the name argument.

The main function prompts the user for a name. The name is then passed to the build_message function and its return value printed out to the CLI output.

Run this program by running the command below at the root of the project folder.

The application will prompt you for your name. Enter your name and hit the Enter key to see the greeting message printed to the CLI screen as shown below.

Adding tests for the Rust application

One of the beauties of Rust is that it comes bundled with its own testing framework, and requires no additional setup. You will be writing a unit test for the build_message function to assert its output. Unlike most other languages and frameworks that place tests in separate files, Rust actually encourages you to place your unit tests in the same file as the piece of code being tested.

The cargo test command for running tests in a Rust application will locate any function with the #[test] attribute in the project and run it as a test case.

Add this test case just below the build_message function:

In this test, a name variable is declared and assigned a String value of Fikayo. The next line then checks that the build_message function returns the expected message for the argument passed in.

To run this test, run:

The test should run successfully. This is the output that will appear on your CLI:

Connecting the Rust application to CircleCI

To begin the test automation process for your Rust project, you need to push the project to GitHub.

Next, go to the Projects page on the CircleCI dashboard. Select the appropriate GitHub account and add the project. 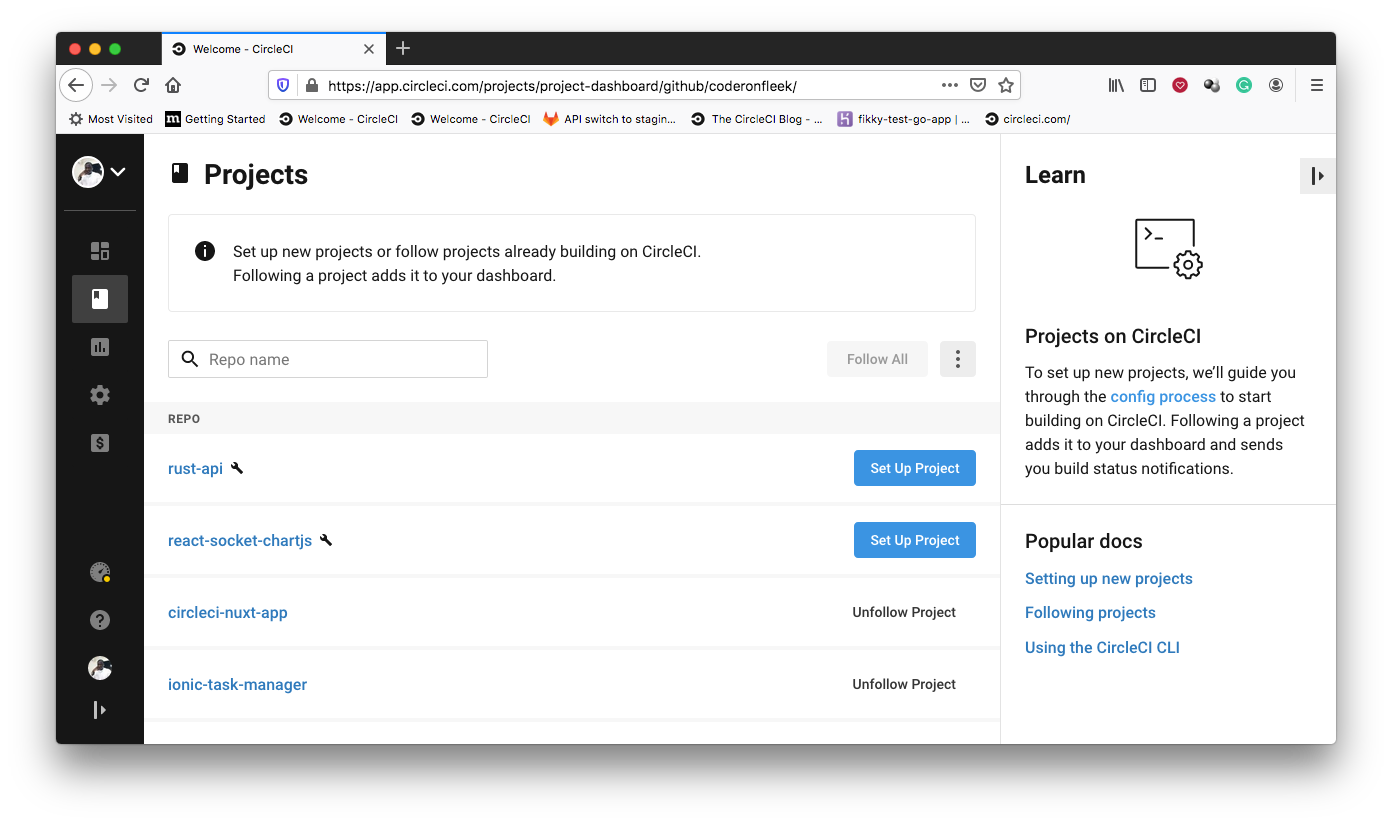 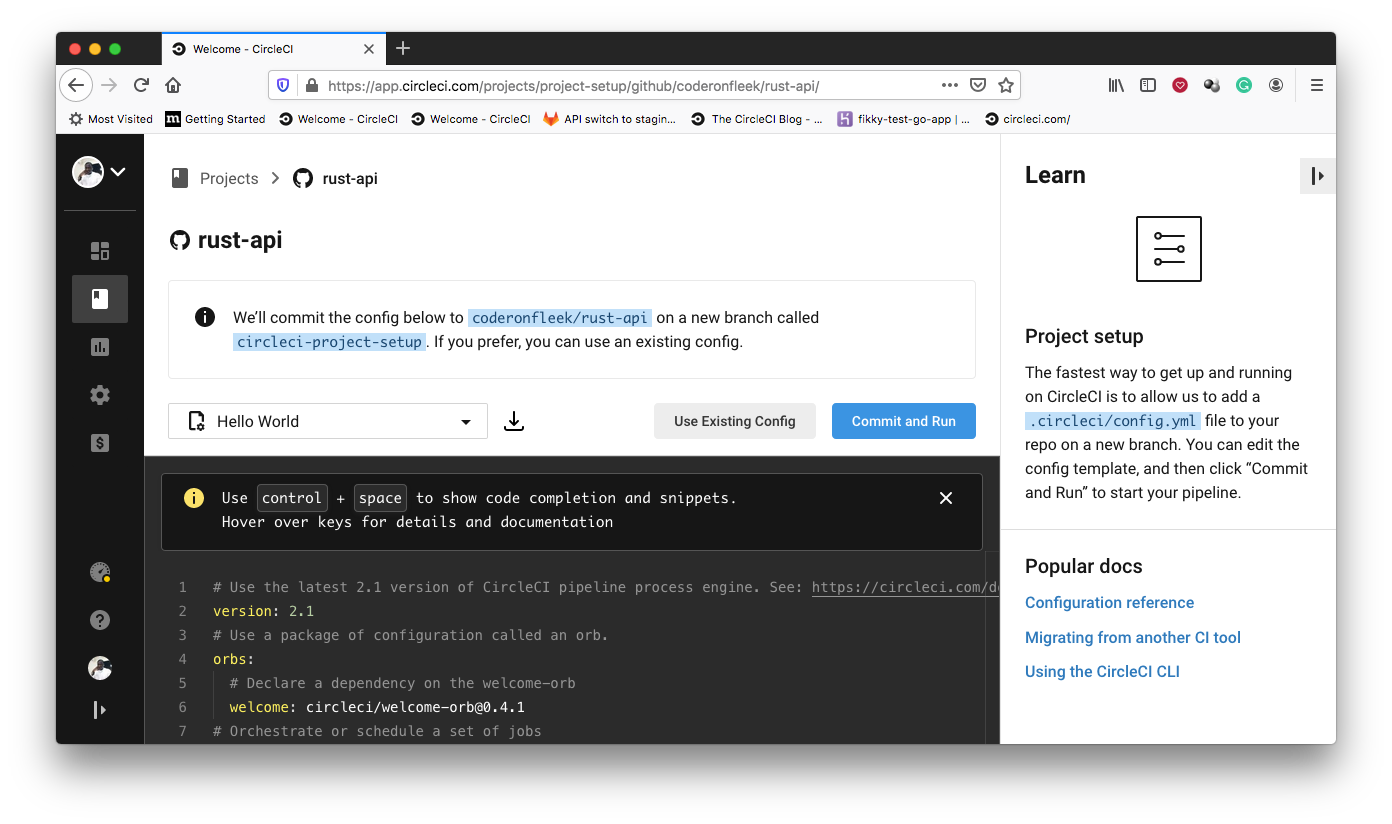 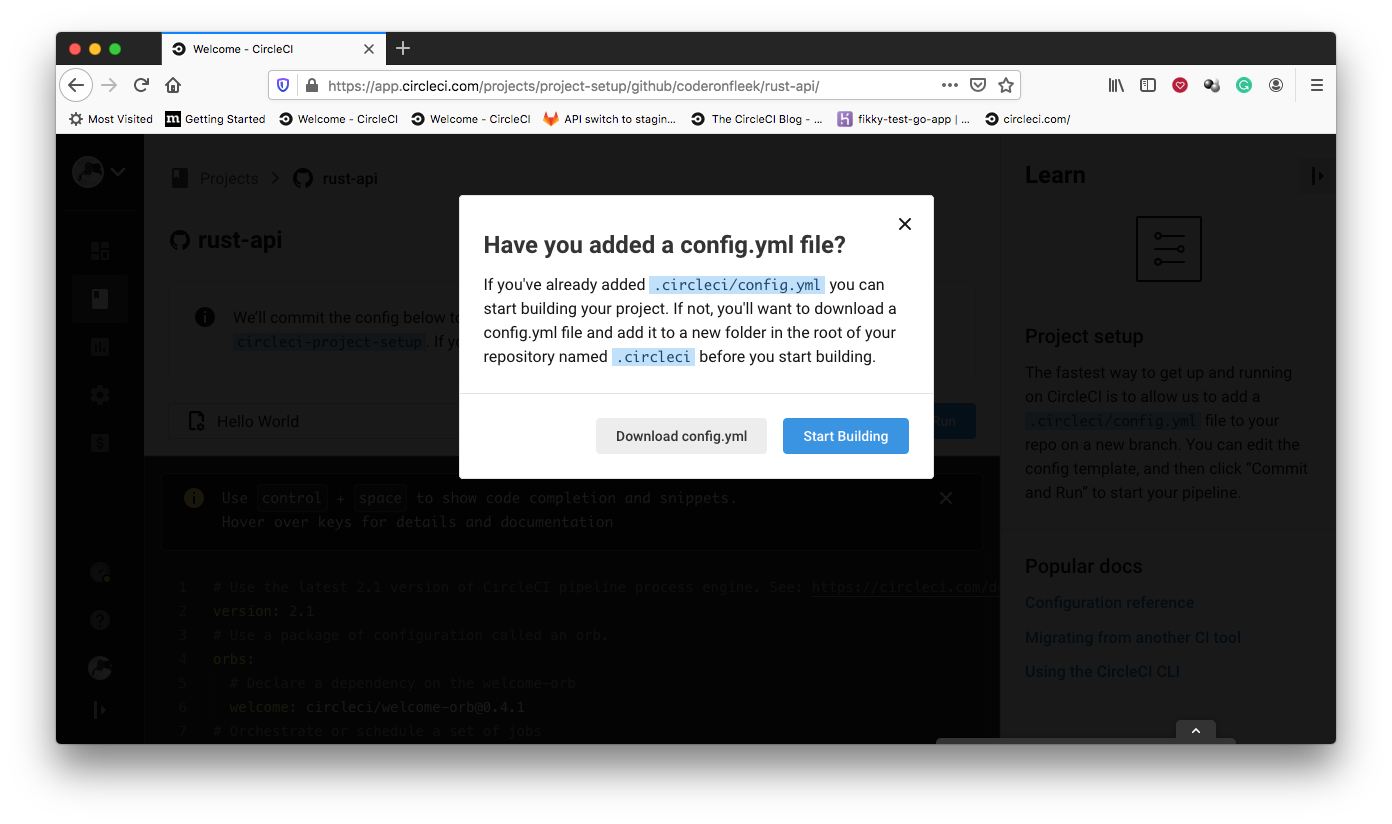 Click Start Building. This build will fail because you have not set up your configuration file yet. We will build this file in the next step.

Automating tests for the Rust application

Time to write the continuous integration script that will automate the running of tests in the project any time updates are pushed to the remote code repository.

At the root of your project, create a folder named .circleci and add a file named config.yml to it. Inside config.yml, enter this code:

This code pulls in the CircleCI Rust image cimg/rust:1.50.0. This image gives you access to all CLI commands available for a Rust installation.

The code is then pulled from the remote repository and the step labelled Run Tests uses the cargo test command to run tests contained in the project.

Commit all changes to the project and push to your remote GitHub repository. The integration pipeline is triggered, and you should have a successful build.

Click the build job for details about the deployment. 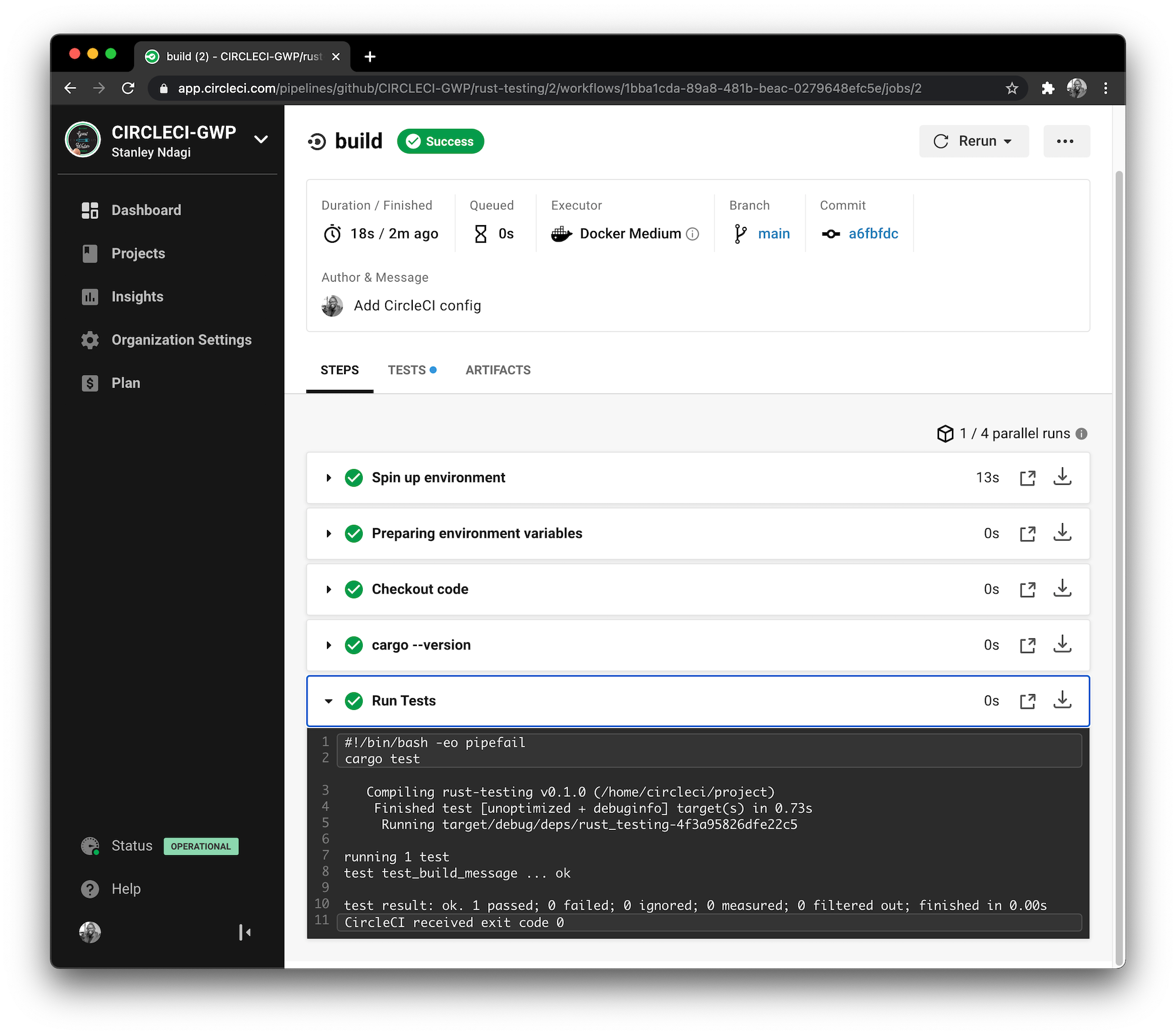 Now, each time you change your code, either by adding more features or more tests, and then push to your remote repository, your tests will automatically run. You will be alerted if your build failed due to a broken piece of code.

In this tutorial, you have learned and demonstrated how to automate tests in your Rust projects using a continuous integration pipeline. To expand your knowledge, learn how to continously deploy Rust applications. From start to finish, you can increase the value of Rust for your team so you can build better apps, faster.