This article attempts to demystify the use of orbs to quickly get started with the CircleCI platform. Orbs enable you to share, standardize, and simplify configurations across your projects. You may also want to use orbs as a reference for config best practices. Refer to this orb introduction for a high-level overview. You can also refer to the CircleCI orbs registry for the complete list of available orbs.

This article assumes that you have a fundamental understanding of the following technologies and tools:

Kubernetes is a vendor-agnostic cluster and container management tool, open-sourced by Google in 2014. It provides a “platform for automating deployment, scaling, and operations of application containers across clusters of hosts.” Above all, this lowers the cost of cloud computing expenses and simplifies operations and architecture. For a quickstart to GKE, see the docs.

If you don’t have a Google Cloud Platform account, you can get one here. Once we are logged in to our account, we need to create a project with the id circle-ci-demo.

Next, we need to download and install the Cloud SDK which is a command-line interface for Google Cloud Platform products and services that contains gcloud, a tool which we will use later.

From the command line, confirm that the project actually exists by entering this into your terminal:

Initialize the gcloud environment by entering this into your terminal:

Authenticate it by entering this:

kubectl is a command line interface for running commands against Kubernetes clusters. Let’s install it by entering this into your terminal:

Create a container cluster on GKE with the name circle-ci-cluster. You can do this from the GCP console, but it can also be done from the command line by entering this:

We can confirm successful cluster creation with this command:

To ensure that the cluster has been set correctly, run the command:

Docker is an open-source tool that automates the deployment of an application inside of a software container. The use of containers to deploy applications is called containerization. Containerization has become popular because containers are flexible, lightweight, interchangeable, portable, scalable, and stackable. You can read more about Docker in the linked webpage.

Our project requires a Dockerfile to dockerize our simple nodejs application. A Dockerfile is a text document that contains all the commands a user could call on the command line to assemble an image. Below is the Dockerfile used in the project:

We can now build and tag an image with:

Confirm that the image was successfully created by running this command from your terminal:

Test the image locally by running this command from your terminal: The next step is to tag and push the image to a registry for easier management. Developers, testers, and CI/CD systems such as CircleCI need to use a registry to store images created during the application development process. We can tag the image with the following command:

Then we can push the image to Google’s Container Registry (GCR) with:

Now that we have pushed our working, containerized Docker image to a registry, we are ready to deploy the application to our circle-ci-cluster cluster.

Kubernetes uses YAML for configuration. We will need a Kubernetes Service of type LoadBalancer to make our Deployment accessible to the outside world.

Create a folder to hold the .yaml files for the Kubernetes Service and Deployment. For this example, I named the folder admin. Create two files in the folder with the contents from below:

Since our Kubernetes manifests are in the folder admin, we can validate both of them by running the following command against the admin folder:

Now we are all set to deploy our application. Deploy it with this command:

To access the application, get the external IP with the command:

How will we automatically checkout the application from GitHub, build it, test it, and update the running instance on GKE? We will do this with CircleCI.

Now that we have a basic working deployment to GKE, we will need a way to update the application once changes have been pushed to our VCS of choice. We will be integrating CircleCI with GitHub. CircleCI configuration lives in the .circleci directory in the project’s root folder in the form of a .yml file, i.e., the path to the configuration is .circleci/config.yml.

We won’t need to write any custom scripts to deploy our application to GKE. We will save massive amounts of time by importing pre-built commands, jobs, and executors into our configuration file. We will invoke the following orbs in this project using the orbs key:

Orbs consist of the following elements:

For this project, the config.yml file contains the following lines of code:

Push the changes with your CircleCI config file to GitHub. Note: This is an example Service Account (not in use). You should NEVER commit service accounts to code repositories as malicious attackers can gain access to your cloud platform’s resources.

Copy the service account contents and add them as environment variables for your project by clicking the cog icon at the top right. 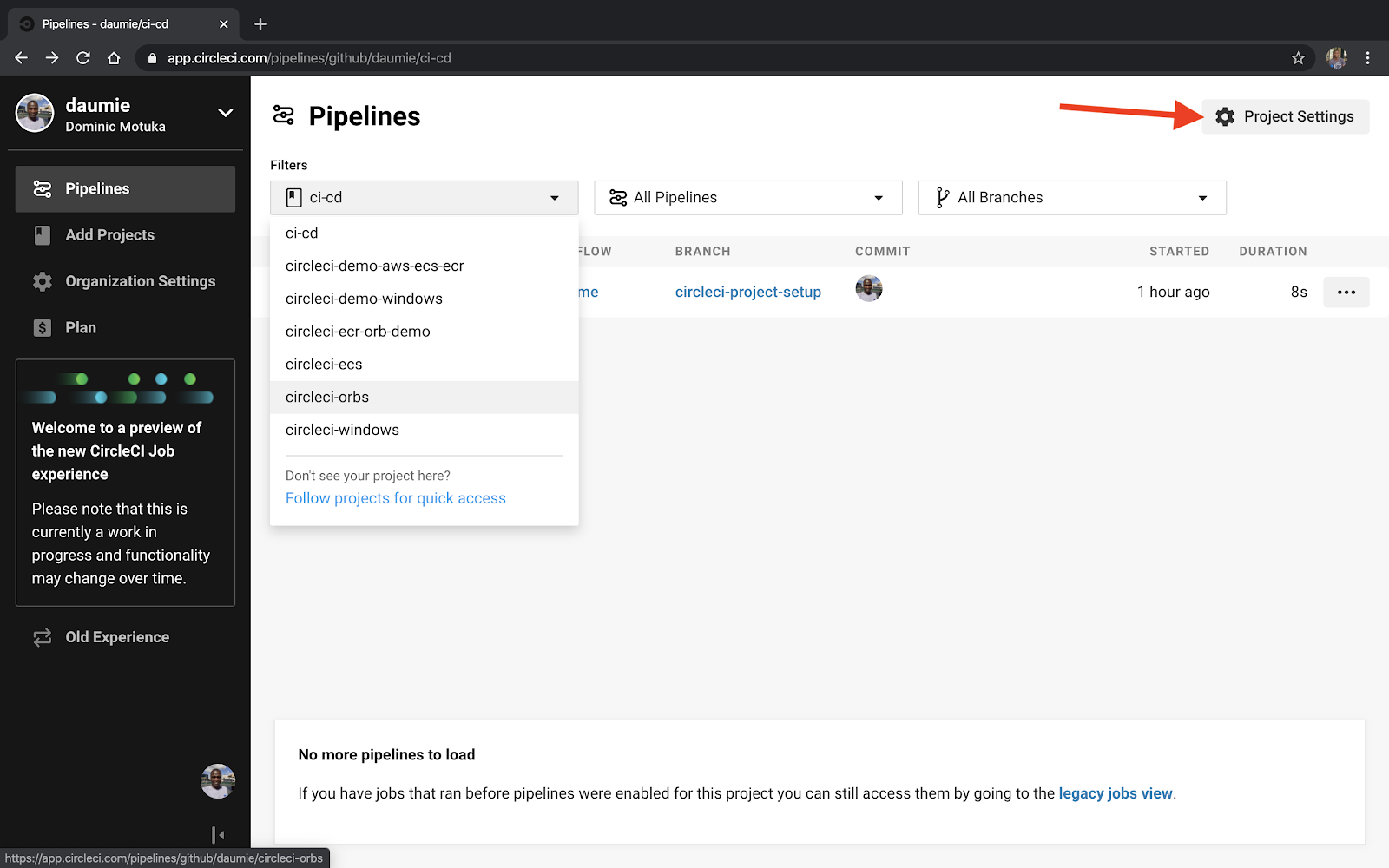 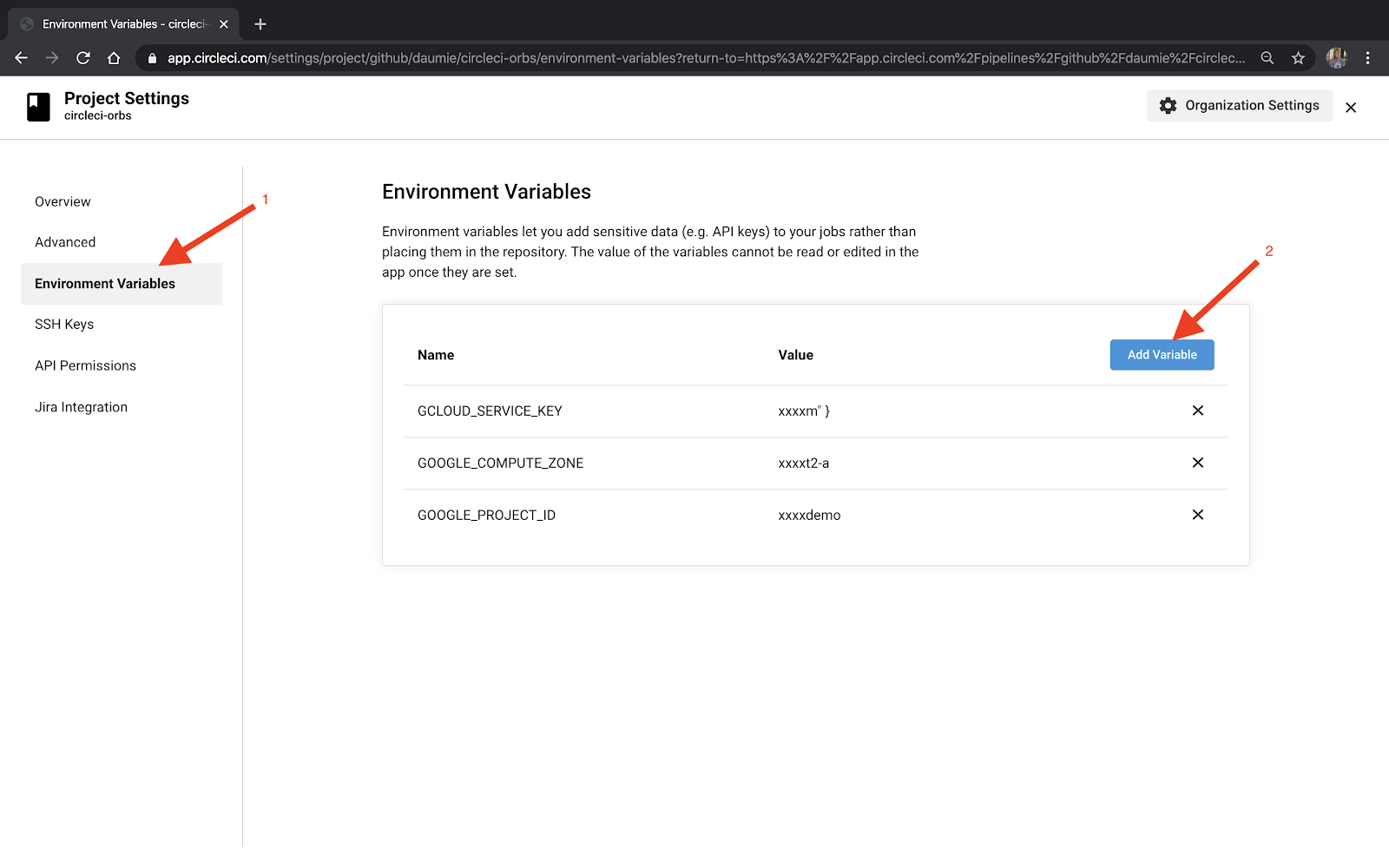 Add the service key as GCLOUD_SERVICE_KEY. You will also need to add the GOOGLE_COMPUTE_ZONE. You can get this by running the command:

Note: Use the cluster that you created.

For my cluster, at the bottom, the zone can identified as europe-west2-a. Depending on your location, this can be different.

For GOOGLE_PROJECT_ID, we can grab it from the console directly from the project-info card:

Now we have the CircleCI environment set. We can trigger a new build to test that our pipeline works. Your workflow will be similar to the one below: 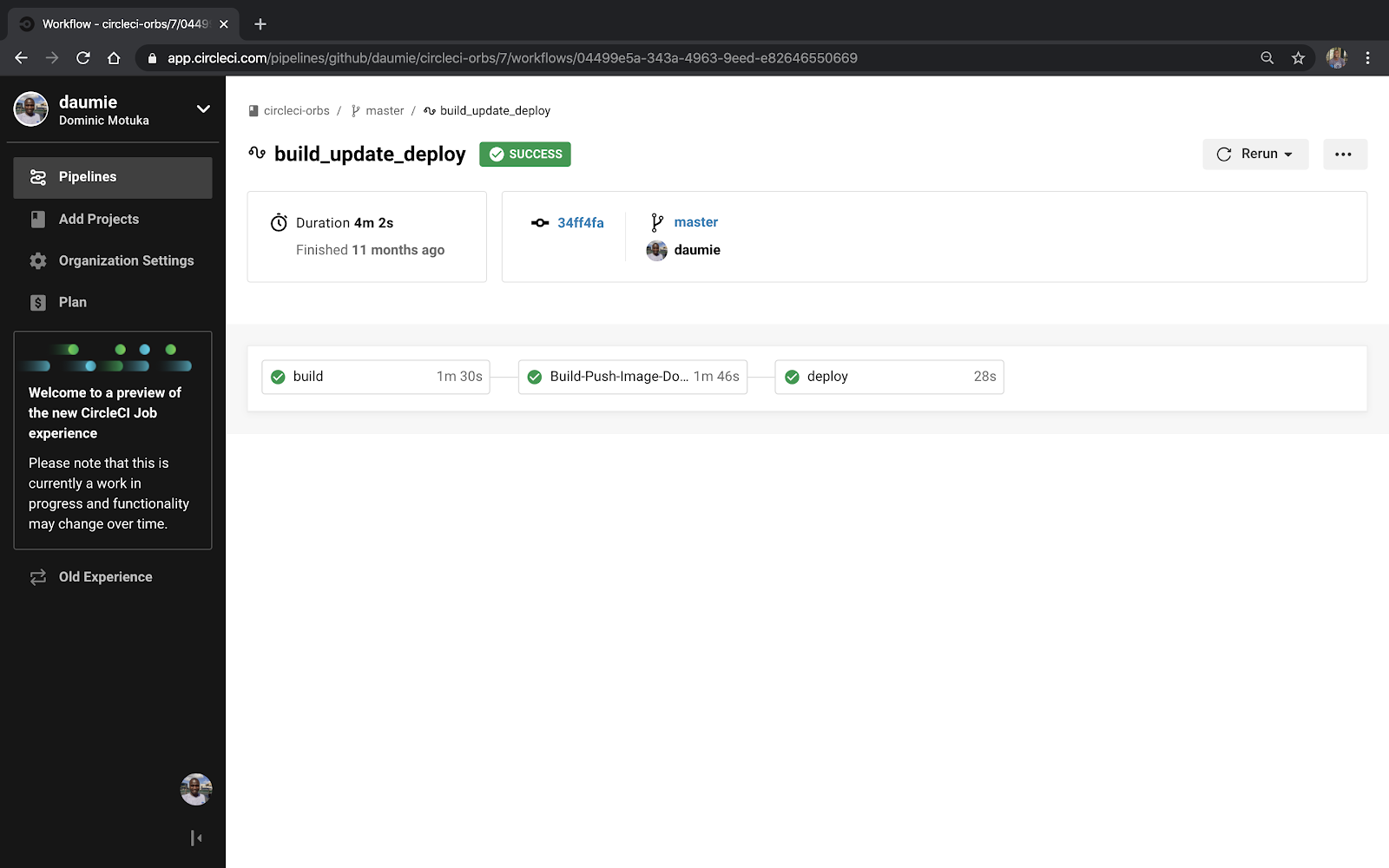 Accessing the application on GKE

You can get the applications external IP by running the command: Using CircleCI orbs improves productivity by simplifying how we write our CircleCI configuration. Orbs can also be shared, which saves time by using pre-built commands, jobs, and executors in our configuration files.

Orbs are not limited to CircleCI + GKE deployments. You can go through the list of available orbs in the registry to find the ones that align with your choice of cloud platform, programming language, and more.