Because of the Webview rendering engine in Cordova apps, some developers argued that these apps were not truly “native”. React Native settles that argument. React allows developers to create truly native apps by providing JavaScript components that map directly to the platform’s native UI building blocks.

In this tutorial, you will learn how to:

With all these installed and set up, it is time to begin the tutorial.

To begin, create a new React Native application. Choose a location for the app, then run:

If prompted, press Enter to continue. This command uses npx to invoke the react-native init command to scaffold the new app project inside a MyTestProject folder. 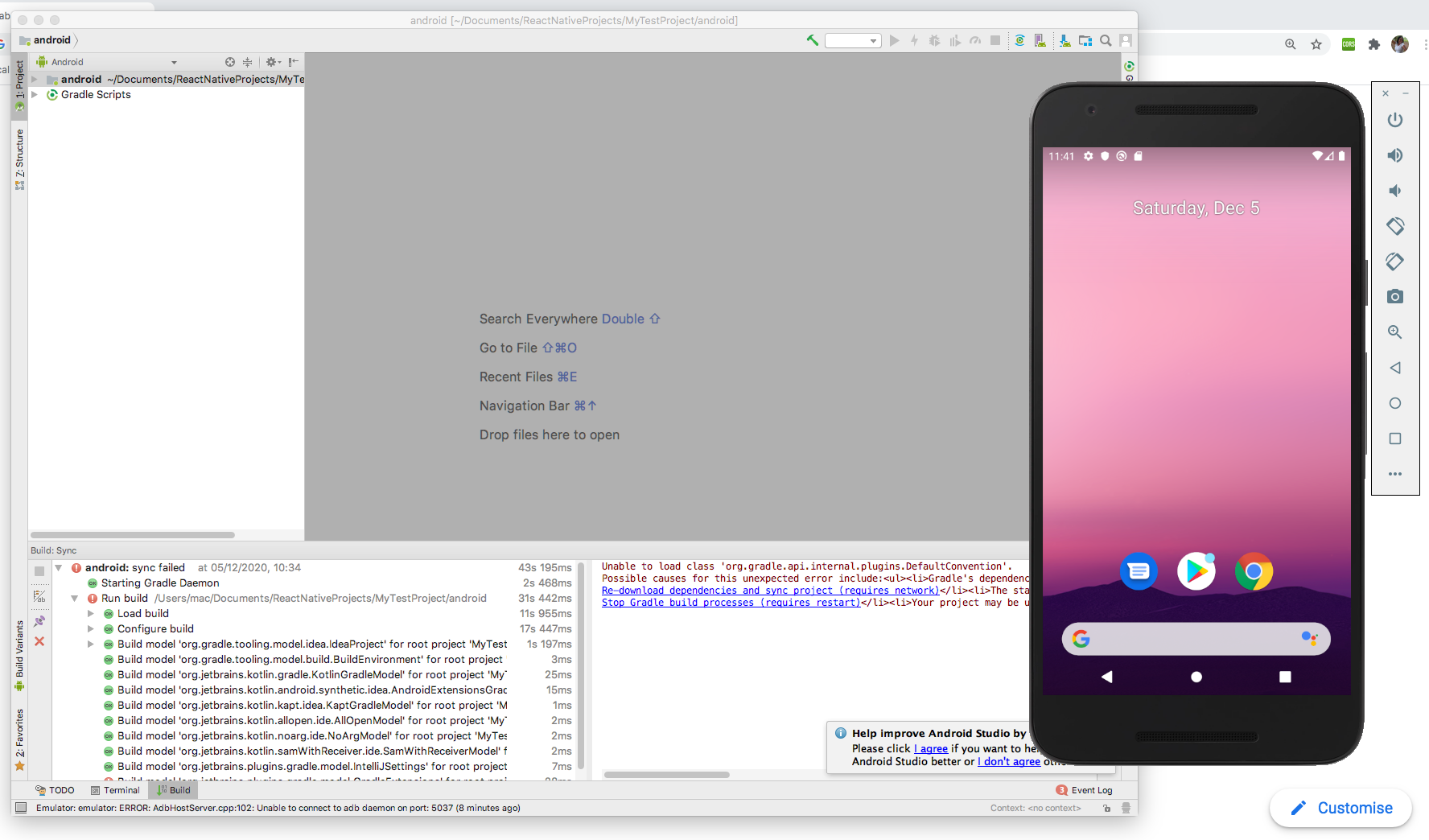 In this tutorial, you will be creating a simple React Native application that gives users a button to click that displays a message. Then you will write a test suite to test this behavior.

Go to the App.js file (in the root folder) and replace the code in it with:

To run this project, open a terminal window, then, start up Metro. Metro is a Javascript bundler that enables reloads of your application in the emulator any time file changes occur. Start Metro:

Note: If the app does not start automatically, open the application drawer in the emulator and manually start the MyTestProject app.

Leave Metro running in its own terminal window (make sure your emulator is still running). Open another terminal window to run the React Native application in the emulator: 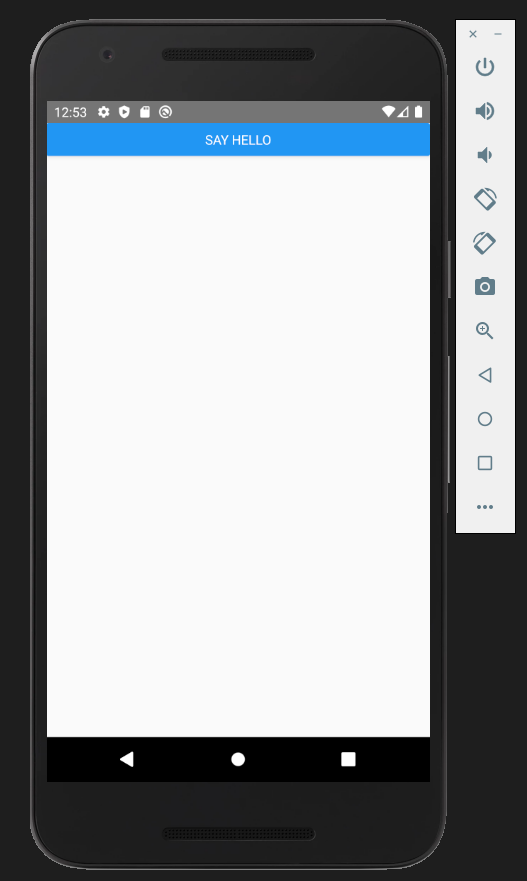 On the screen that appears in the emulator, click the Say Hello button.

Setting up and adding tests

One great advantage of scaffolding a new React Native app with the CLI tool is that a basic testing setup has already been configured in the seed project. The testing setup uses Jest, and includes a __tests__ folder to store the test suites. For this tutorial, though, we need to use the React Native testing library.

Install the React Native testing library as a development dependency:

After installing the library, replace the code in the test suite __tests__/App-test.js file with this snippet:

Because we added the asynchronous behavior to the response to the button click, we need to wait for the Text component, given a test id of printed-message, to display before testing its content.

Once it is loaded, the Text component is tested for the string Hello Tester.

To run the test suite, go to the root of the project and run:

This command displays a screen in your CLI indicating that the tests passed. 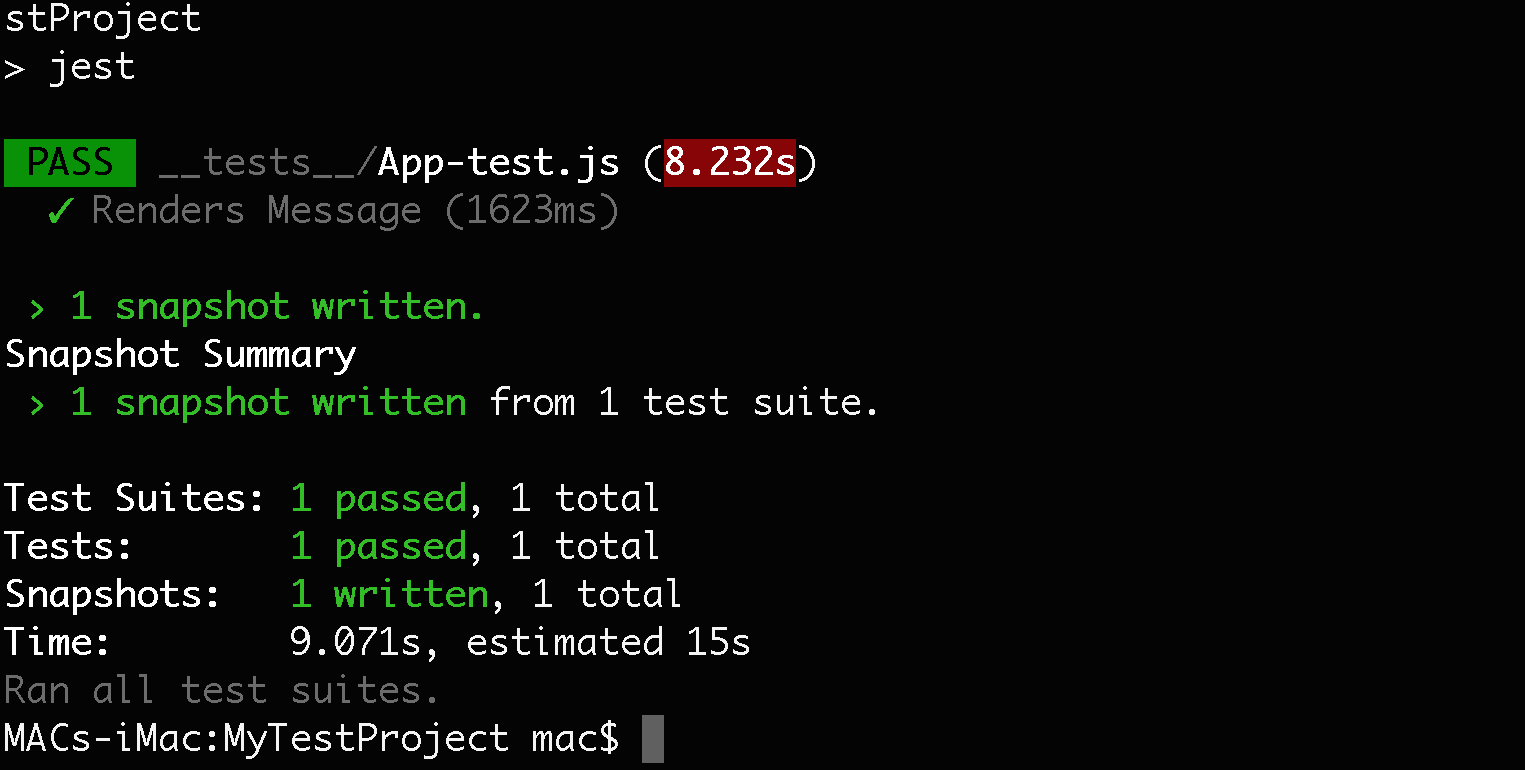 Setting up the project on CircleCI

To begin the test automation process, the first step is pushing your project to GitHub.

Make sure that the GitHub account you are using is the one connected to your CircleCI account.

Now, go to the Projects page on the CircleCI dashboard. Select the GitHub account you are using for this project. 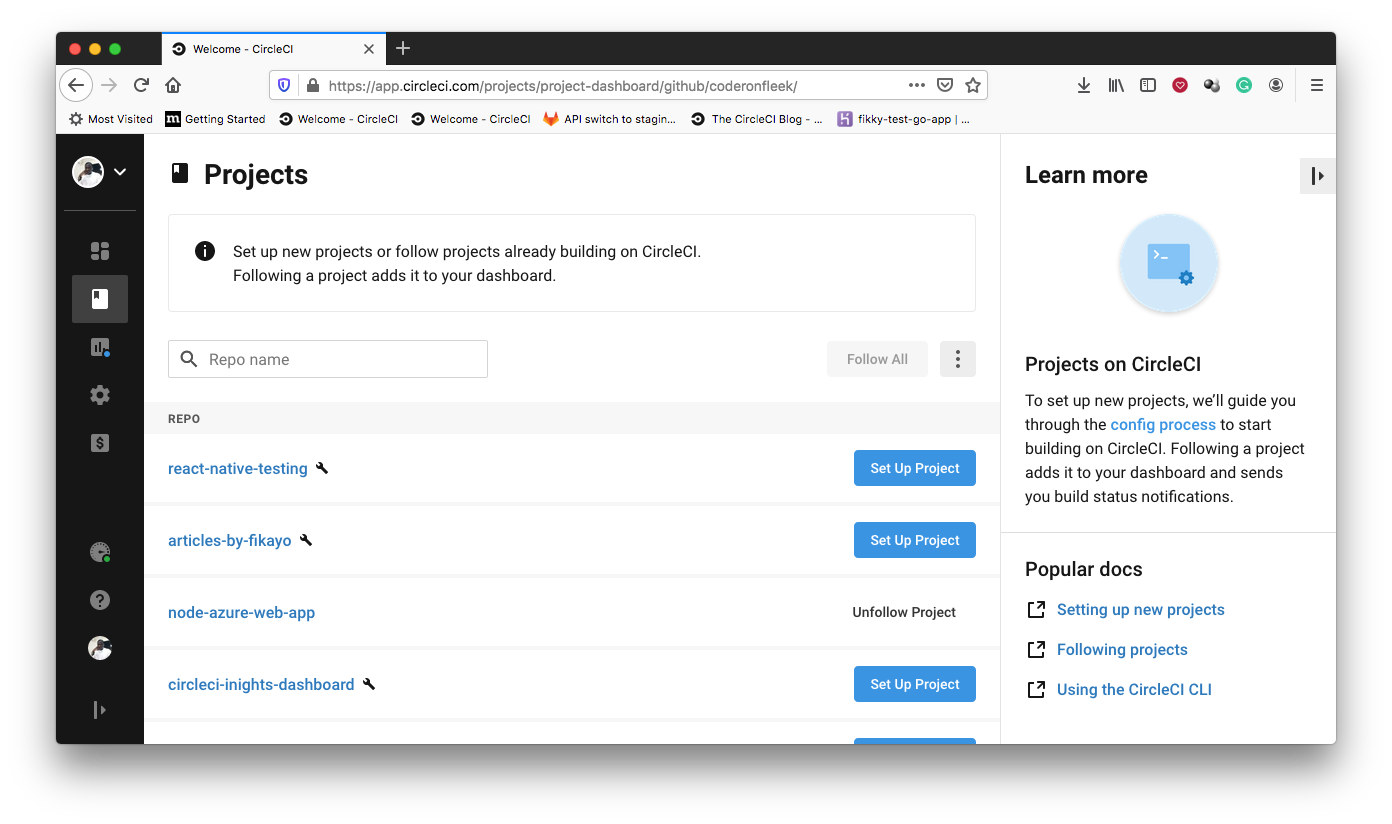 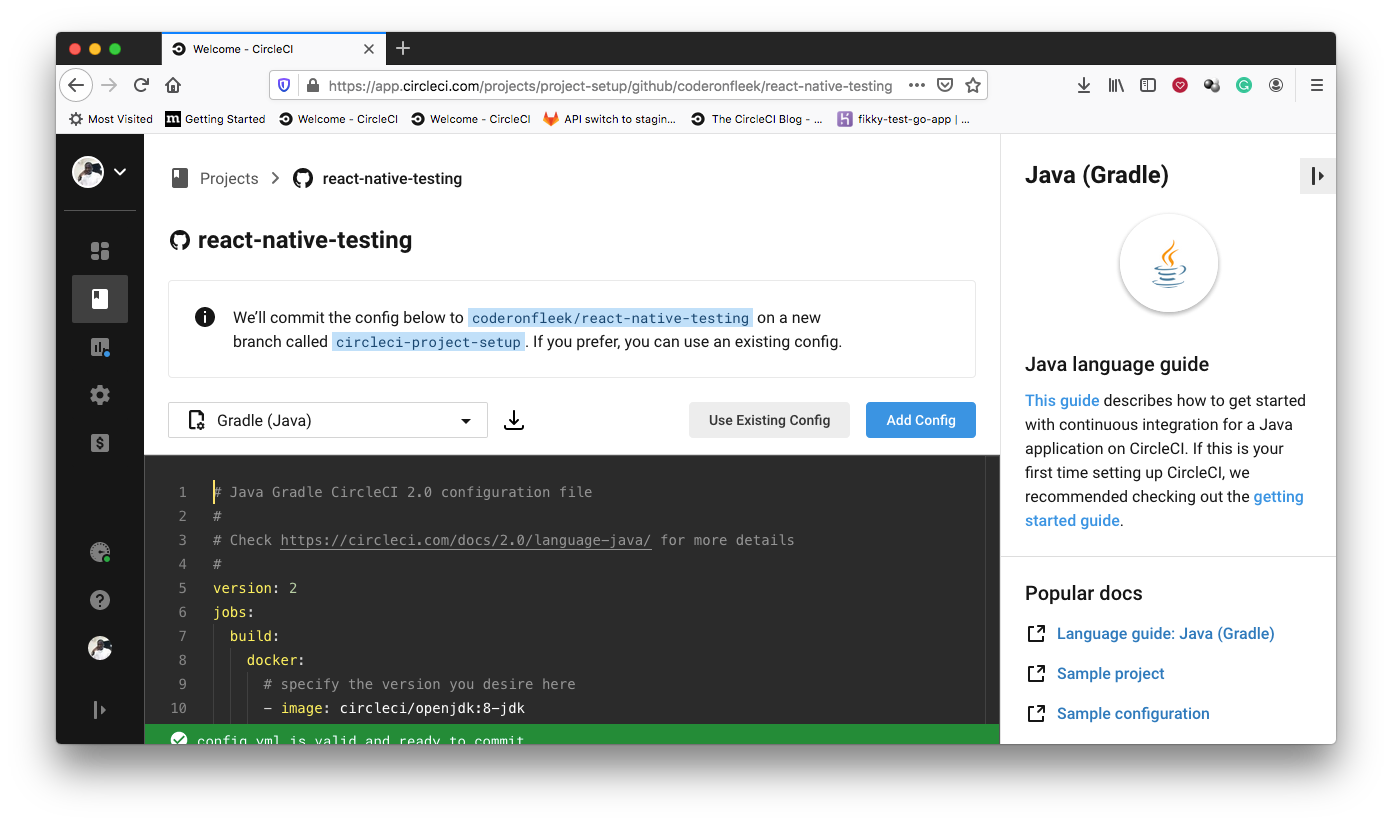 On the setup page, click Use Existing Config. Next, you get a prompt to either download a configuration file for the CI pipeline or start building. 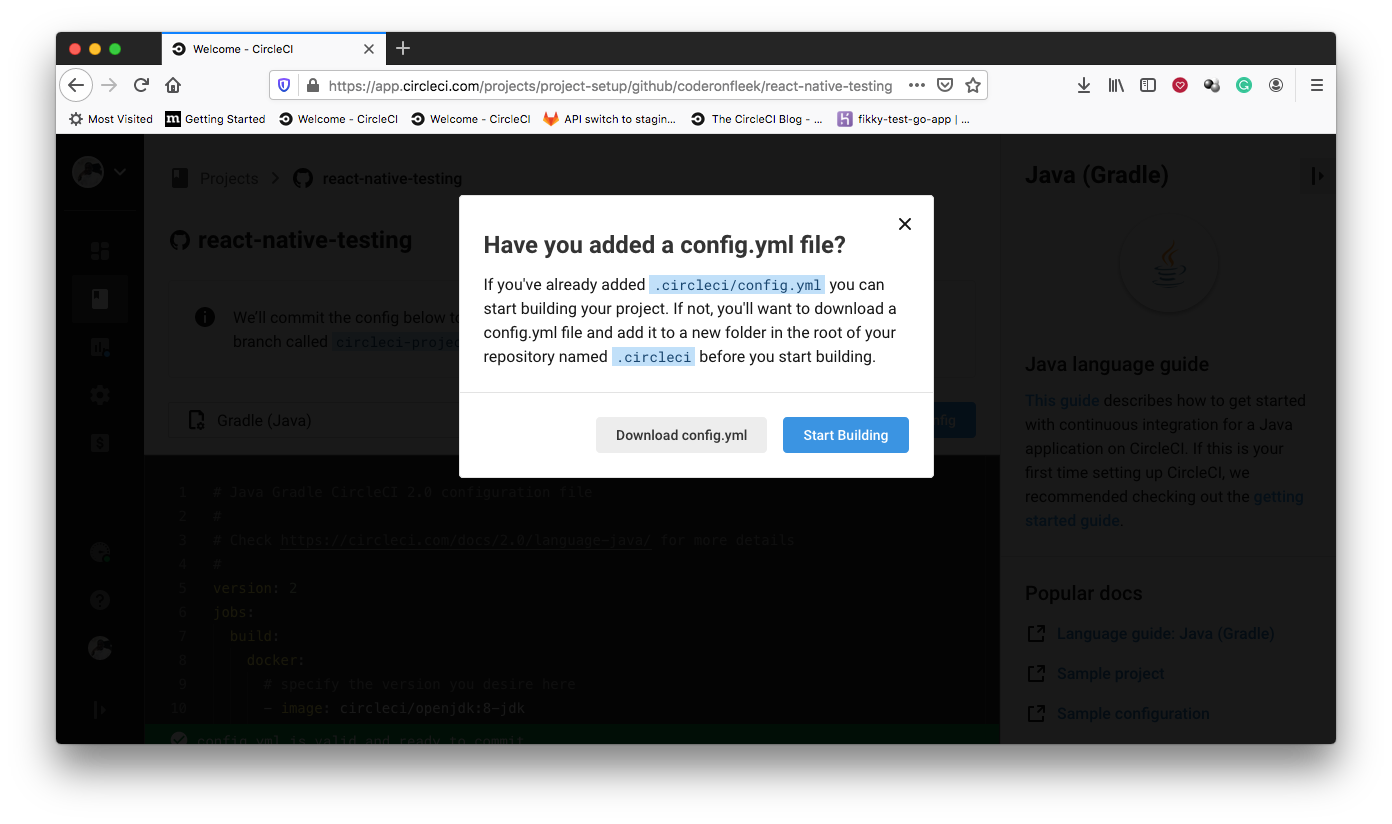 Click Start Building to begin the build. This build will fail because you have not written the CI pipeline configuration file yet. Writing that file is our next step.

The continuous integration pipeline ensures that tests run whenever updates are pushed to the GitHub repository. The first step is creating a folder named .circleci at the root of the project. Add a configuration file named config.yml. In this file, enter:

In this pipeline configuration, the Docker image is first imported with the required Node.js version. Then, npm is updated and dependencies are installed, caching them so that subsequent builds are faster.

Finally, the npm run test command runs all tests contained in the project.

Save this file and commit all your changes to your remote repository. Commiting the changes triggers the pipeline to run successfully.

Click build to show the pipeline build steps. If you collapse Run tests, you will see the details of the test. 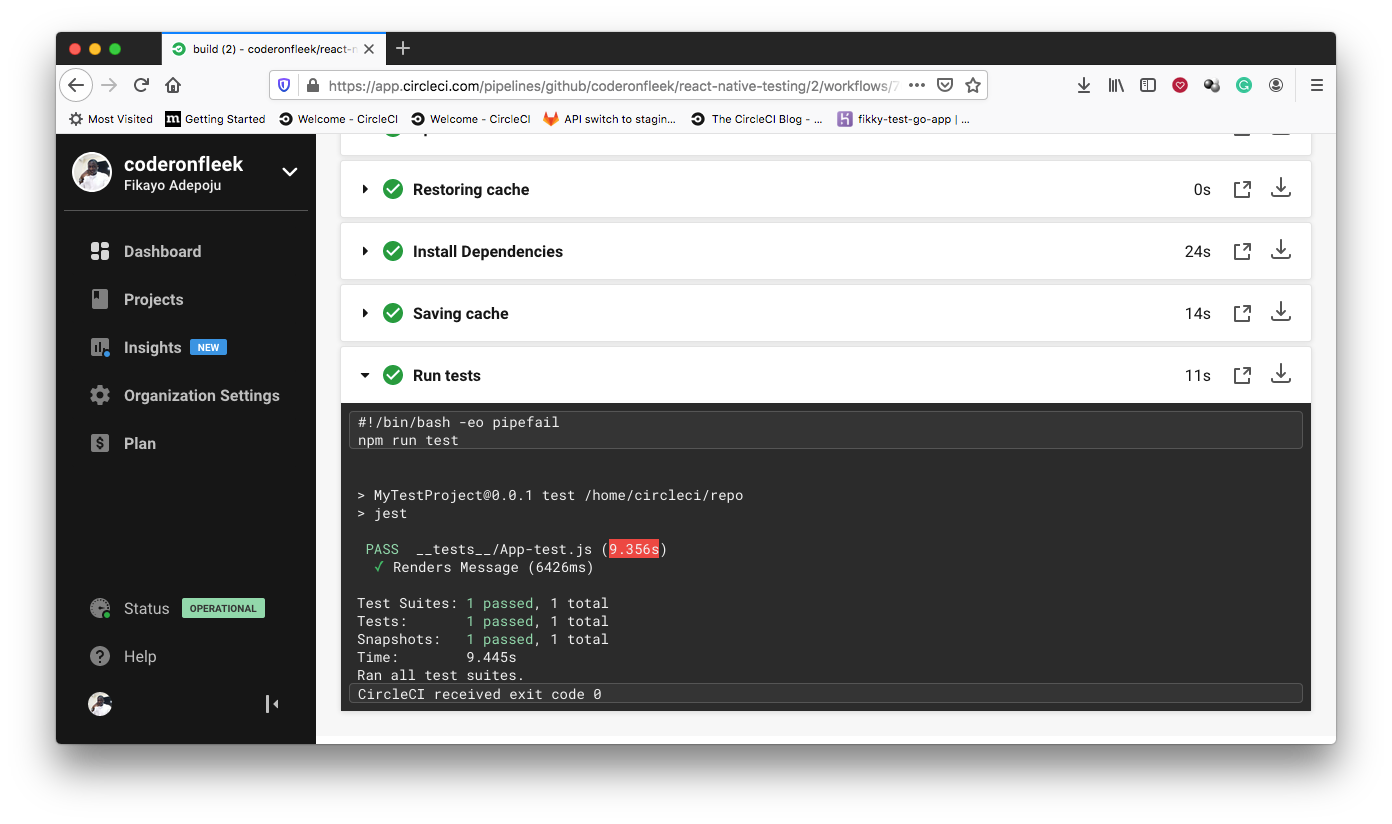 Proper testing may be even more important for mobile apps than it is for web applications. Requiring users to install updates to your app every time you fix a bug is an easy way to annoy them. Keep users happy by applying what you have learned here to thoroughly test your React Native applications. More importantly, automate your testing process, and make sure those bugs are not pushed to your production code in the first place.