This series was co-written by Tyler Sullberg and Musa Barighzaai.

In the previous post, we explored high-level differences between thinking in Clojure compared to thinking in JavaScript. We are now ready to start building our first Clojure microservice.

The microservice we are going to build will be very simple. It will be an HTTP server that uses a Redis data store to count how many times a given IP address has pinged the /counter endpoint.

We will walk you through each step of how to build this service in this tutorial. If you would rather, you can find the completed project here.

Please note that when you are developing in Clojure, you will mostly be working in the REPL, but for the sake of clarity, we won’t use the REPL in this tutorial. We highly recommend that you check out these instructions for using the REPL and start making the REPL central to your Clojure development workflow.

Before we can start building out the project, we should introduce ourselves to the tool that will manage our project structure, Leiningen.

The closest analogs to Leiningen in the JavaScript world are Yarn and npm. Like Yarn and npm, Leiningen is how you will manage dependencies and publish packages. There are important differences in how Leiningen works, though.

Setting up your first Clojure project

Next, we will create our Leiningen application clojure-for-js-devs

Now open the clojure-for-devs directory in an editor and you will see that Leiningen has built out a project for you. 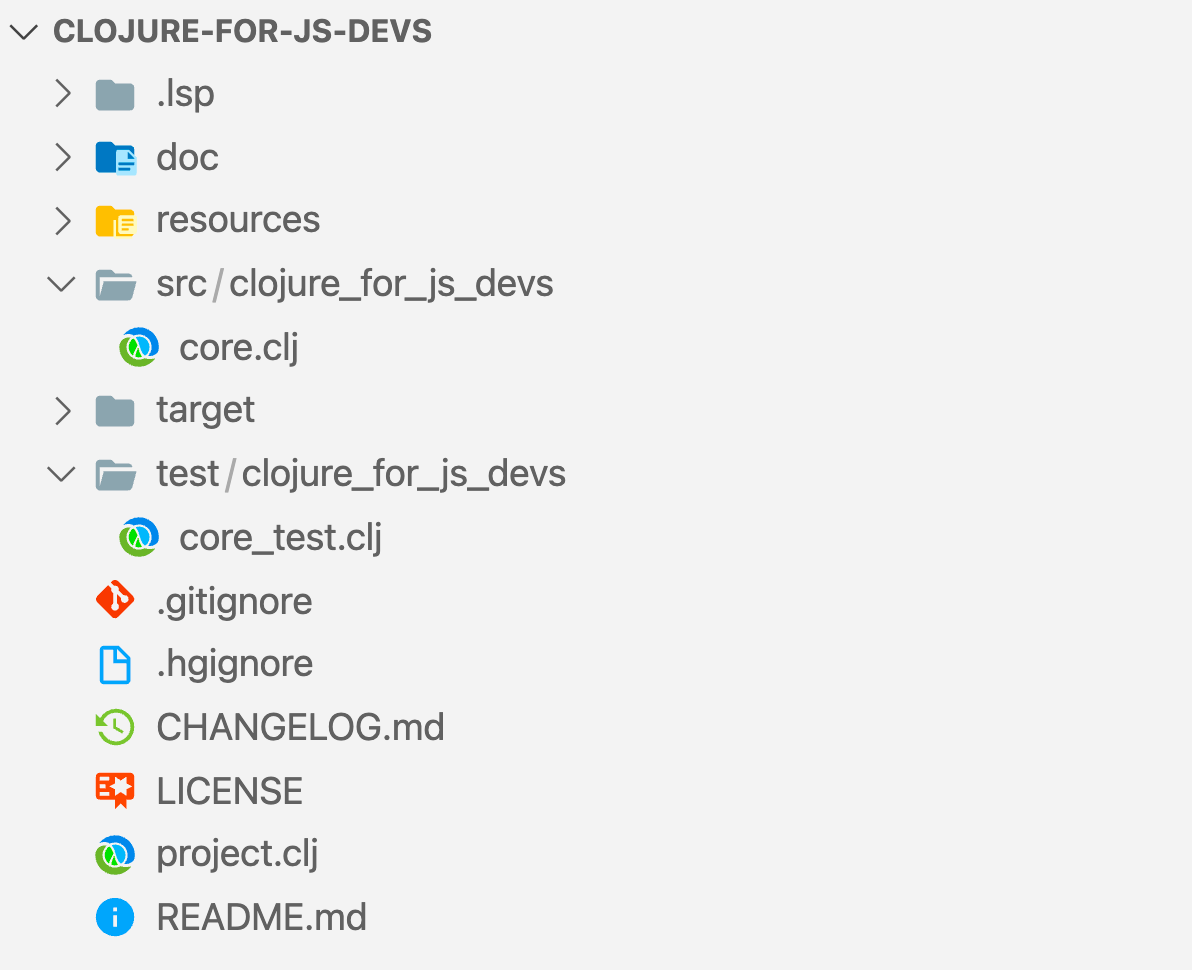 Most of these files are self-explanatory - the src directory and test is where we will write our tests. Similar to ES or CommonJS modules, each .clj file we create in these directories will be its own namespace. The project.clj is the most important file of this project.

project.clj is very similar to a package.json file:

You can also create custom scripts in the same way that you can create npm scripts, but we will cover that in the next post.

Note that the configuration of the project.clj is wrapped in a defproject. Defproject isn’t a new Clojure construct you need to learn, it’s just a macro from Leiningen. This is why the body of defmacro seems to defy the normal Clojure syntax that we’ve grown to know and love.

Creating the components of the application

Now that we have the shell of our application, we’re ready to start creating the major components, our HTTP server and Redis client.

In JavaScript, to create our Redis client, we’d do something like:

In other words, to create these components, we end up creating a giant object that has all of the methods and properties we need to conveniently manage the lifecycle of that component.

Of course, since Clojure is a functional language, our approach is going to look different:

Before we can show the functional approach for building the HTTP server component and Redis component, we need to give a bit of background about two Clojure constructs that may be unfamiliar to you if you’re a new Clojure developer: defprotocol and defrecord.

Learning how these concepts work will be crucial for understanding how your microservice is structured.

In this example, we create a protocol called Bird which defines the function signature for eat-bread. Notice how the first argument of eat-bread is this. The this in the defprotocol is superficially similar to “this” in JavaScript. Iit represents the data that is implementing this function. ‘This` isn’t a protected keyword in Clojure. We could name that first parameter anything.

So, what if we want to extend the Bird protocol with our own data type rather than a primitive type? We can create our own data type with defrecord. defrecord creates a Java class that can have properties and implementations of protocols. We can use the -> constructor to make an instance of this class. Let’s make a defrecord for a Duck:

defrecord and defprotocol will be central to how we structure our microservice, so learning these concepts now will give you much more confidence in your ability to build Clojure microservices.

The stuartsierra/component library will be the heart of how our application manages the runtime state of our Redis client and HTTP server components. stuartsierra/component is a framework for managing the lifecycle of components. It makes sure components are stopped and started in the right order and explicitly declares the shared state between components. This framework allows us to make sure that our Redis client is started before our HTTP server, and that the HTTP server knows how to interact with Redis. Components will seem a lot like OOP objects, but remember that we’re still living the Clojure paradigm of pure functions and immutable data structures.

Now we can created our first component, the Redis client. Go to your project.clj file and add stuartsierra/component and carmine, a Clojure Redis client, to the dependencies.

Next, create a redis.clj file in your src/clojure_for_js_devs directory with the following code.

Let us break down what’s going on here. We’re creating a defrecord called Redis and a function to create a new instance of Redis that takes a URI as its only argument. In the Redis component, we implement a protocol called component/Lifecycle. This protocol comes from the stuartsierra/component library and has two function signatures: start and stop. The stuartsierra/component will call the start and stop function on our new Redis defrecord to manage this component’s lifecycle.

So far, this component just keeps track of a Redis connection, but doesn’t actually have any functions for interacting with it. Instead of defining these functions inside of the Redis class, like we might with an object-oriented language, we’re going to define separate functions that can take a Redis class as an argument. Add these these to the bottom of your redis.clj file.

We need to also create a docker-compose-services.yml file in the root directory so that we can run a Redis server during development

Next, we need to create a “component map” that will describe how our components, including Redis, will interact with each other. This component map will initially include only Redis, but will add in the HTTP server component afterwards. Move over to the src/clojure_for_js_devs/core.clj file and copy/paste the following code.

If you’re interested in the details of what’s going on here, the stuartsierra/component source code is a short and useful read. Here is a quick overview:

Setting up the HTTP server

Start off by adding some new dependencies to the project.clj.

Now, create a new http.clj file in the src/clojure_for_js_devs directory. We’ll start by making the defrecord of the server.

The WebServer defrecord is built roughly the same way as the Redis deferecord we created earlier. WebServer implements the Lifecycle protocol and we’ve created a new-server function that makes an instance of the WebServer class. We haven’t yet built out the start-server function, but we will do that shortly.

There’s one important difference, however, between our WebServer and Redis defrecords. Notice how when start-server is called, we pass in (:redis this) as its third parameter. What’s going on here? Where did :redis come from? If this refers to an instance of the WebServer class, then when did a :redis key end up in that data structure?

The :redis key is going to be added into this component by the stuartsierra/component library. Go back to core.clj file and modify the system map so that our WebServer can know about the Redis component.

Modify the imports and main-system function of your core.clj file with the following code:

Head back over to http.clj so we can create our routes and middleware. To do this, we’re going to use a few libraries:

Now we’re ready to create our routes. At the top of http.clj, but below where we import in external namespaces, add the following snippet.

The app-routes function will take in a redis-component as an argument which it will then pass to its route handlers. Go ahead and create the route handlers. Make a new file handlers.clj in your src/clojure_for_js_devs directory, and add the following code.

Now that we have our HTTP handlers, go back to the http.clj file. So far, we’ve defined our routes, but we haven’t yet actually connected these routes to our HTTP server, defined how incoming requests will be processed, or even started our Jetty server. Replace the function stub we made for start-server with the following function.

It is helpful to understand what the -> is doing here. -> is a called threading macro. Remember how in the first post we said that a macro lets you extend the Clojure language to things that otherwise wouldn’t syntactically be possible? Well, that’s what’s happening here. This threading macro works by executing the first function after the -> and then passing the result to the next function in the list. You could accomplish the same thing with a bunch of nested function calls, but this looks prettier, right?

start-server is defining how an incoming request will be processed. It begins by defining the routes, then defines how request is processed, then finally starts the jetty server.

Our microservice is now functional and ready to go! Fire it up:

Go to http://localhost:8080/counter in your browser to see if the routes work.

As you refresh /counter, it should increment.

Congratulations! You’ve just created your first Clojure microservice. You’ve learned the basics of how we structure our application with Leiningen and the stuartsierra/components library. You’ve also learned the key Clojure concepts defrecords and defprotcols. You now know about macros that are central to how these libraries work.

We’re not done yet, though. In the next post, we’re going to build out testing and continuous integration (CI) for our new microservice.