Writing tests in any programming language can be difficult, but it does not have to be. In this tutorial, I will show you how you can easily write and run tests using Flask and Pytest.

As a bonus, we will also integrate a CI/CD pipeline to run tests on a Flask app using CircleCI.

Be sure to check out our other Flask tutorials to learn about application logging, authentication decorators, and automating Flask deployments.

To get the most from this tutorial, you will need:

You will also need to have these installations and setups:

Once the project is cloned, go to the root folder of the project. Install the dependencies using the command pip install -r requirements.txt.

Flask is a lightweight micro-web framework written in Python. Flask comes pre-installed with just the core features so that you can pick customizations depending on the requirements of your project. Flask does not make decisions about which database to use or what the default parser is. All that can be changed with modifications, which makes it extensible and flexible for the emerging needs of your development team.

In this project tutorial, we will use a simple book-retrieval API built with Flask. We will use the API to show how we write tests in a Flask application. To keep this tutorial simple, we will focus on testing the API rather than building it. The API application can be found in the api.py file in the project root directory of the cloned repository.

Now that you know what Flask is and how to use it, you can build on that knowledge by learning about Pytest and how to set it up on a Flask app.

What is Pytest and how do I use it?

Pytest is a Python testing framework designed to assist developers with writing better systems and releasing them with confidence. Small and scalable tests are simple to write with Pytest. This code snippet shows the basic layout of a Pytest test:

Testing Flask requires that we first import a Flask instance app from our api (created in our application), as seen in the previous snippet. The imported instance then exposes a test_client() method from Flask that contains the features needed to make HTTP requests to the application under test. In this case, it is to our default (/) API endpoint. We then assert that the responses received by test_client() are to be expected after decoding the byte object. In the next steps below, you will use this format to write your tests.

Note: By default, Pytest encodes API responses using the utf-8 codec. You need to use the decode() method to convert the byte objects received from the test client to readable string responses, as seen in the previous code snippet.

Setting up Pytest on Flask

After the installation is complete, import the Pytest module. This snippet can be placed on any test file:

For this tutorial, keep your tests in a tests directory in the root folder of the application. Pytest recommends that test file names begin with the format test_*.py or end with format **_test.py, Using these formats enables Pytest to auto-discover the test files easily and also minimizes confusion when running tests. Precede test methods with the word test when creating tests: test_index_route():.

Now that you know how to set up Pytest on a Flask app, you can start writing tests for the book-retrieval API. Your first test will be for the /bookapi/books route.

All this route does is return a list of books that are hardcoded into the books variable. You will test this endpoint in the next step. Using the same format, define your test function and assert that the response received by the test_client() is what you expect.

To run Pytest tests, you can either use py.test or pytest in the terminal. You can also run a single file by explicitly specifying the filename after the Pytest command: pytest test_api.py. When these commands are executed, Pytest finds all the tests in either the root directory, or in the specified single file.

When no test files have been explicitly defined, Pytest executes any tests in the root directory that follow the standard naming pattern, without you needing to specify filenames or directories.

You have verification that the test was executed successfully! Pytest marks a passed test with a green dot .; it marks a failed test with a red F. Count the number of dots or Fs to figure out how many tests passed and failed, and in what execution order.

Note: If you are debugging the tests to the console and you need to print out a response, you can use $ pytest -s test_*.py to log to stdout. When the Pytest s option is defined, you can console messages inside the test and debug the output during the test execution.

Now that you have successfully executed your first test, you can integrate CircleCI to run the tests automatically when you push to the main branch.

Create a .circleci directory in your root directory and then add a config.yml file there. The config file contains the CircleCI configuration for every project. Use the CircleCI Python orb to execute the tests as shown here:

CircleCI orbs are reusable packages of YAML code. Orbs condense multiple lines of code into a single line. In this example, that line of code is: python: circleci/python@2.1.1. You might need to enable organization settings to allow the use of third-party orbs in the CircleCI dashboard, or request permission from your organization’s CircleCI admin.

Log into CircleCI and go to the Projects dashboard. From the list of GitHub repositories associated with your username or organization, find the specific repository that you want to set up in CircleCI. In this case it is testing-flask-with-pytest. 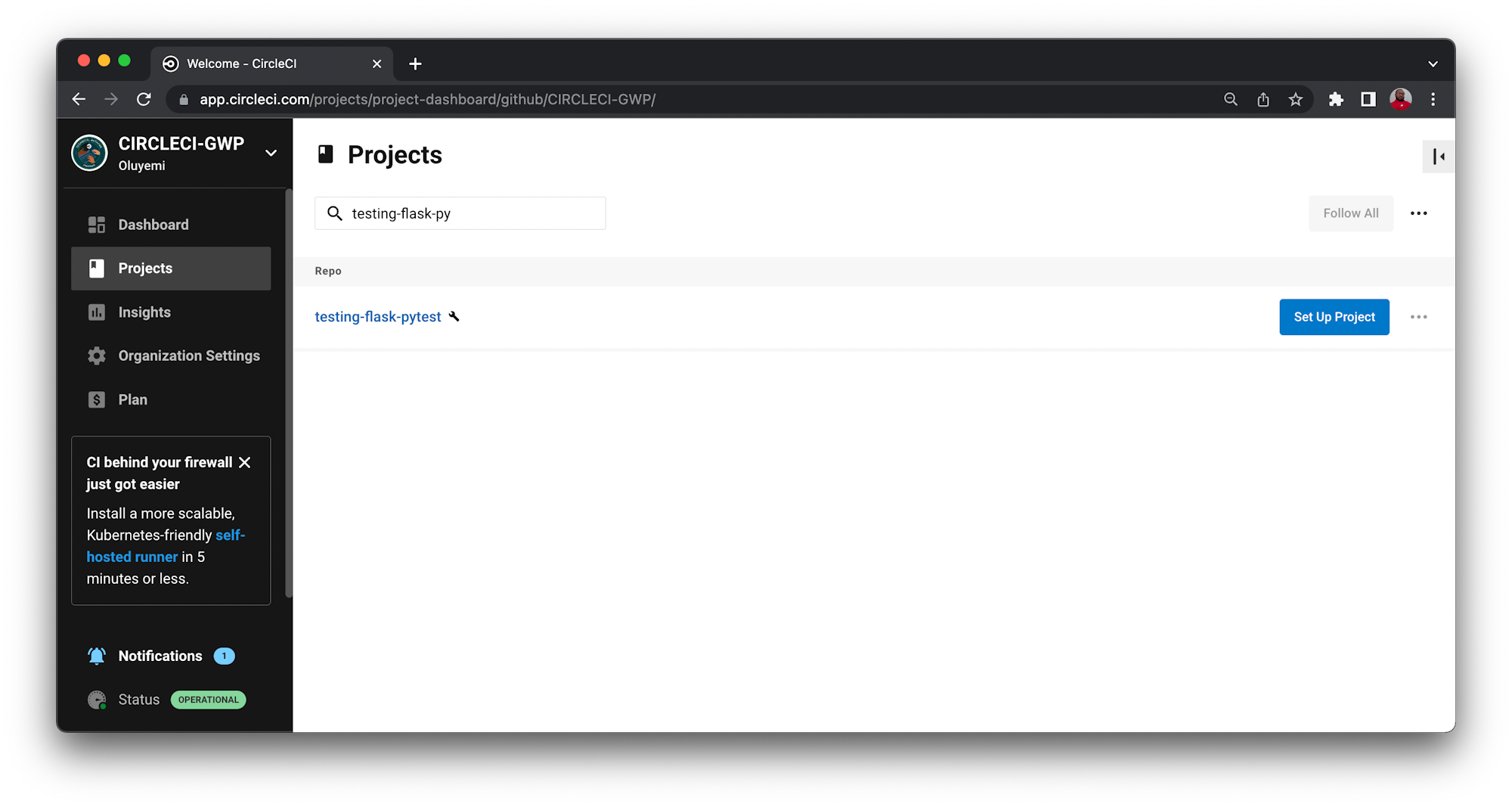 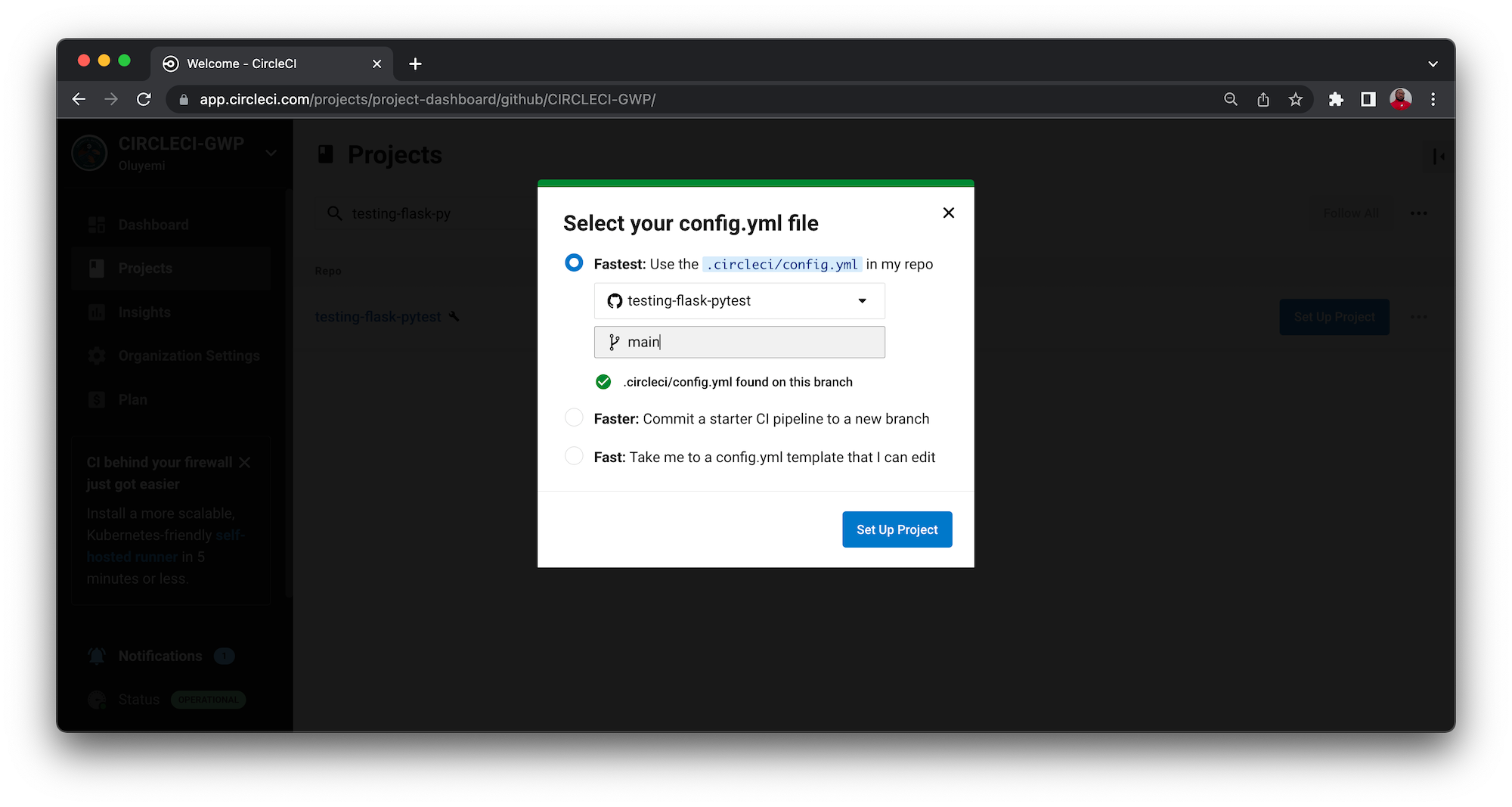 Voila! From the CircleCI dashboard, click the build to review details. You can verify that running the first Pytest test and integrating it into CircleCI was a success. 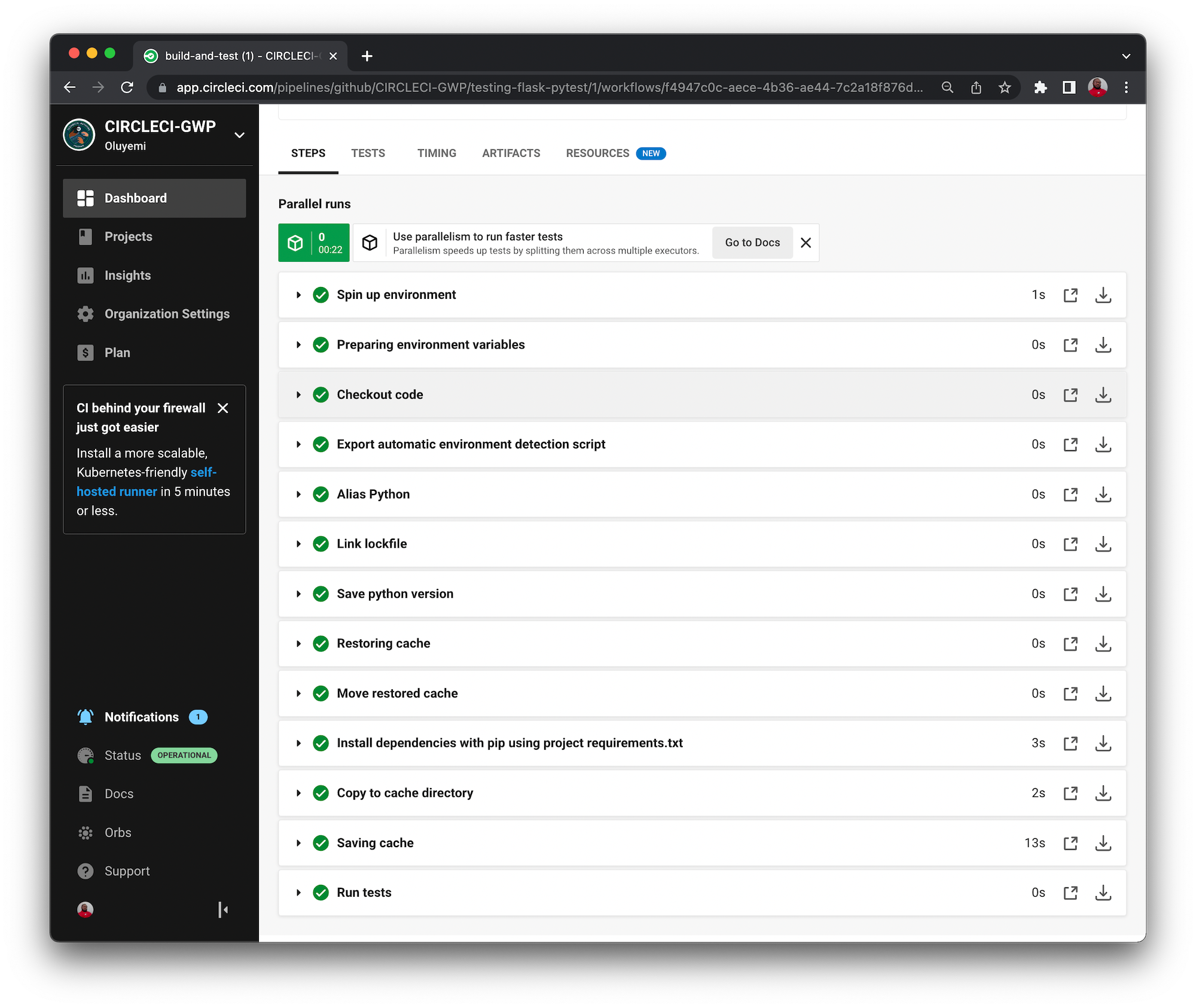 Now that you have successfully set up continuous integration, the next step is grouping tests and running batches of grouped tests.

Grouping and running batches of tests

As application features are added, you need to increase the number of tests to make sure that everything works. It is easy to get overwhelmed by the large number of test scripts available. You do not need to worry though, Pytest already has that figured out. Pytest allows you to run multiple tests from a single file by grouping tests.

Pytest provides markers that you use to set attributes and features for testing functions.

We can use markers to give tests different behaviors, like skipping tests, running a subset of tests, or even failing them. Some of the default markers bundled with Pytest include xfail, skip, and parameterize. For this project, you will create a custom marker that will group all the tests that perform GET requests to the /bookapi/books and /bookapi/book/:id endpoints.

Here is an example of the structure you will use to create a custom marker:

To use the custom marker in Pytest, define it as an argument in the pytest command:

-m <markername> is the custom marker name you will use for your tests.

You need to import pytest in your test file to use Pytest markers. Markers also need to be registered so that Pytest can suppress warnings about them. Add this to your pytest.ini file:

For the tutorial, you want to group the tests that make the GET request to the /bookapi endpoints.

Create a customer marker called get_request and add it to the tests:

Running the test with the pytest -m get_request argument executes all the tests marked with the @pytest.mark.get_request decorator in the test file. You can also verify this by running it in the terminal.

Now, commit and push your changes to GitHub and check that the pipeline executes successfully. Excellent! All your tests were executed successfully.

In this tutorial, you have set up tests with Pytest, executed them, learned to group tests using Pytest markers. You learned how to use Pytest command line arguments to execute tests and how to use the test_client() method to make HTTP requests. You know how to use the received responses in your tests. I hope you enjoyed this tutorial. If you did, share what you learned with your team. Nothing solidifies learning like teaching someone else. Until the next one, enjoy your coding projects!