This article is an introduction to using CircleCI orbs to build and push production-grade Docker images to the Amazon Elastic Container Registry (ECR) for storage. Familiarity with the tools and technologies used in this article is preferred but not necessary. Here is a brief summary of the common terms and technologies:

Let’s dive into Amazon ECR, what it is, and how CircleCI can help you get the most out of this service.

What is Amazon ECR?

Why would you want to use a private Docker registry like Amazon ECR?

Developers need to use a registry to store images created during the application development process. Continuous integration pipelines connect building container images and pushing these artifacts into Amazon ECR. Imagine a pipeline where you push a commit that triggers a build on CircleCI that pushes a new image into Amazon ECR. Your registry can then fire off a webhook and trigger a deployment. All without a human having to manually do anything. Registries make a fully automated pipeline like this much easier. Container images placed in the registry can then be used in various phases of the development. In a few steps, using CircleCI orbs, we are going to containerize a simple Node.js application, build the image, and push it to Amazon ECR.

From the AWS management console, select IAM. This service lets you manage access to AWS resources. 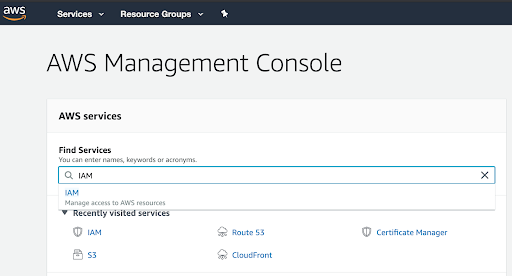 Create a role/user. In this example, I called mine ci-cd-ecr, but any arbitrary name will work.

Next, we will need to programmatically access our Amazon ECR service using an AWS_ACCESS_KEY and an AWS_SECRET_KEY. Click on the newly created user and go to the Your Security Credentials page. Here you will be able to create a new access key. Store the key securely as we will be using it to access the Amazon ECR service from CircleCI. The key will be in a format similar to this:

Generate an access key and secret key for the user and store them in a safe place. We will need them when setting up our CircleCI pipeline example.

Setting up a CircleCI pipeline using the aws-ecr orb

The code for this demo is available on GitHub here. CircleCI config file can be found in the .circleci/ folder. Using orbs, as you’ll see, we accomplish building an image and pushing it to Amazon ECR using only 18 lines of config! To use orbs, we need to use CircleCI version 2.1. It is the version that has support for orbs. The aws-ecr orb comes prepackaged with commands to:

Here is the full config for our pipeline:

There are several environment variables you can see in the config that will need to be set:

Note: You don’t have to set the $CIRCLE_SHA1 because it is the default variable available in all CircleCI projects. It’s the SHA1 hash of the last commit of the current build. Using the Git commit hash gives you the ability to trace what’s in the containers. Ideally, it allows us to trace a container back to its Docker image, and then back to the Dockerfile and code contained in the image. In an automated execution environment, this will take us back to the commit that caused the Docker image to be built.

The config example above uses the $CIRCLE_SHA1 to set the tag:. Alternatively, you can use the CircleCI build number ($CIRCLE_BUILD_NUM) as a tag in your builds.

The dockerfile: command above specifies the path to your Dockerfile. Our demo repo uses the following Dockerfile:

With both CircleCI and Amazon ECR well configured, you can start building images and pushing them to the repository.

In just 18 lines of config, we were able to build and push our Docker image to Amazon ECR. CircleCI orbs save time by importing pre-built commands, jobs, and executors into CircleCI configuration files and provide easy integration with cloud services and other tools.

Building a React dashboard to visualize workflow and job events