Mobile apps are different than web apps and require tooling specifically designed to meet the needs of development, security and DevOps teams. Organizations can speed mobile appdev by optimizing flow and baking in security, which can be achieved by using CircleCI and NowSecure. A long-term collaborator with CircleCI, NowSecure is pleased to be a CircleCI Technology Partner with our own orb in the registry.

Inside the CircleCI and NowSecure integration

Because mobile apps are fundamentally different than web apps, they require targeted tools that can accurately and thoroughly test the behavior of a mobile app under attack. The NowSecure automated mobile appsec testing engine can fully exercise an app during the build process and auto-generate results downstream. 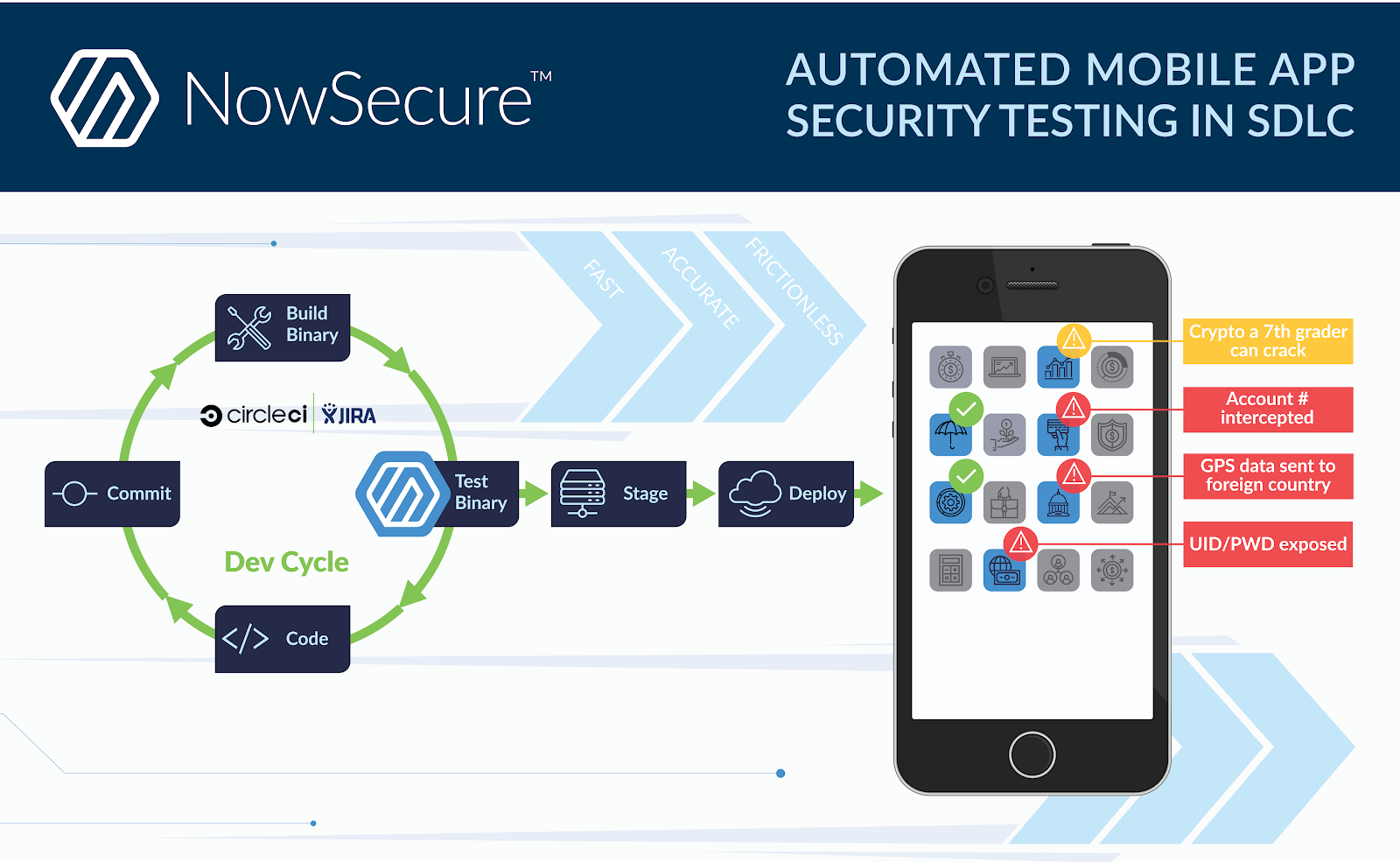 As shown in the graphic above, The NowSecure AUTO CircleCI Orb plugs into the CircleCI platform post-build and runs rapid security tests in parallel or serially with unit testing, functional testing and UX testing solutions.

NowSecure AUTO can automatically test every CircleCI build and feed tickets into the cycle for developers to resolve. Unlike other security testing approaches, this NowSecure + CircleCI integration has zero impact on the dev workflow because there is no new IDE plug-in to learn, no static source code testing false positives to chase down, and no release delays caused by security bugs found too late in the testing cycle.

Connecting the NowSecure AUTO CircleCI Orb to your project is simple with step by step details outlined here in the Github repo README.md. Note that you also need a license of the NowSecure AUTO mobile app security test engine software. To summarize the process:

After checking in changes, the CircleCI build should kick off and you can see the output as it’s running as shown in the screenshot below.

Once the build completes, as shown in the second screenshot below, CircleCI automatically launches the NowSecure AUTO mobile app security test of the app binary. In this example, the full test run was completed in just under 13 minutes. 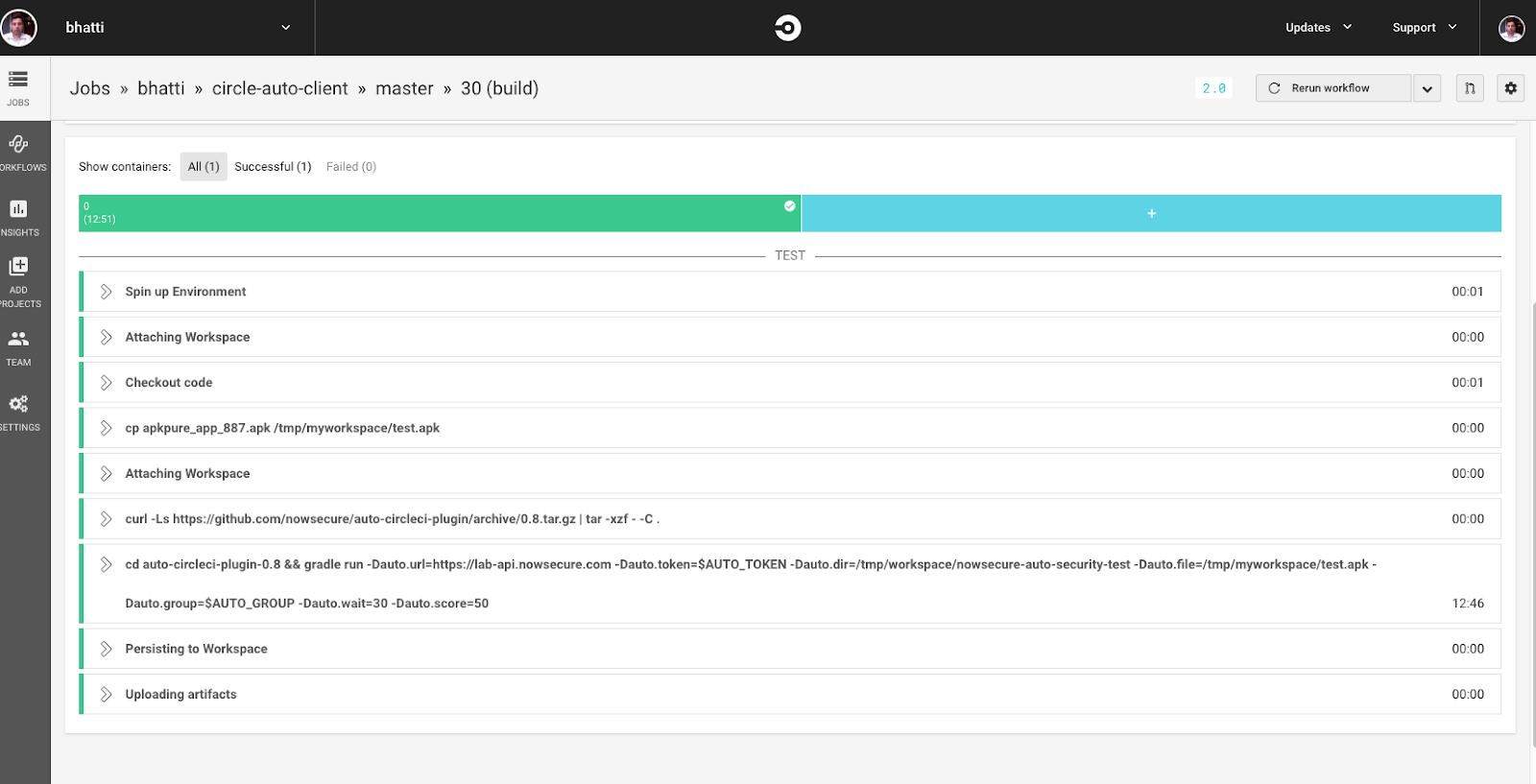 In this third screenshot below, we can see the JSON test results and artifacts that were generated. Individual tickets for each security finding are auto-fed into issue tracking systems like Jira.

Throughout this process, no human intervention is required. In fact, numerous customers run NowSecure “headless” in a fully automated integration mode at all times and never need to log into the NowSecure platform itself.

Under the hood, NowSecure AUTO delivers automated dynamic appsec testing with an integrated behavioral attack tool. This works to ensure full security testing coverage with a high degree of accuracy for near zero false positives. NowSecure automatically pinpoints the security issues developers and security analysts want to prevent, such as:

Often, devs don’t even need to look at the security reports because they consume automatically-fed Jira tickets. The screenshot below shows the report interface that provides dev and security teams with deeper understanding. 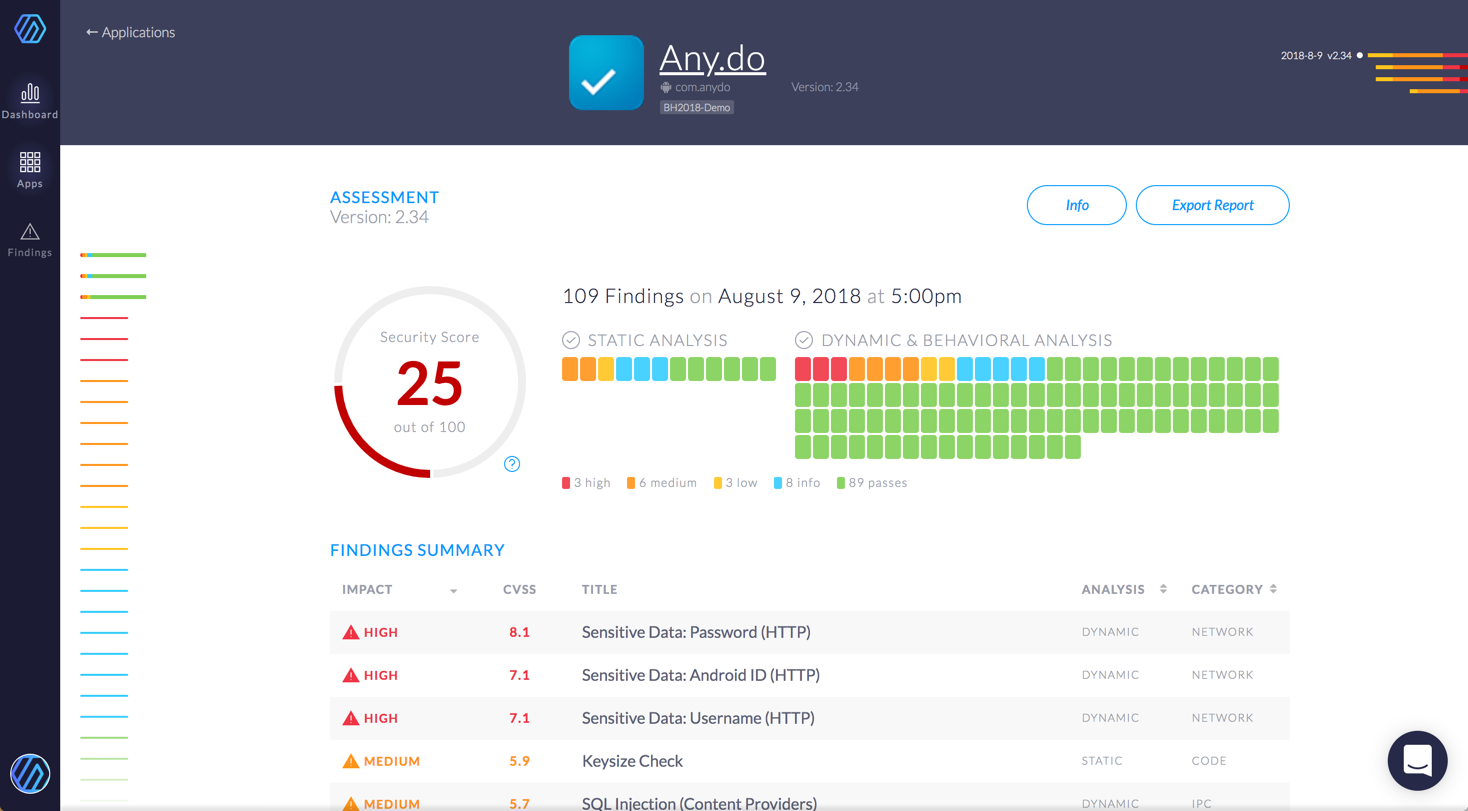 NowSecure AUTO provides a rich dashboard for a comprehensive view of all metrics, trendlines and critical areas of concern. As shown in the orange/red heatmap in the screenshot below, the highest impact security issues to focus on include unencrypted data over HTTP, keysize, a slew of sensitive data issues, “allow data backups” issues, plus one app runs as root. 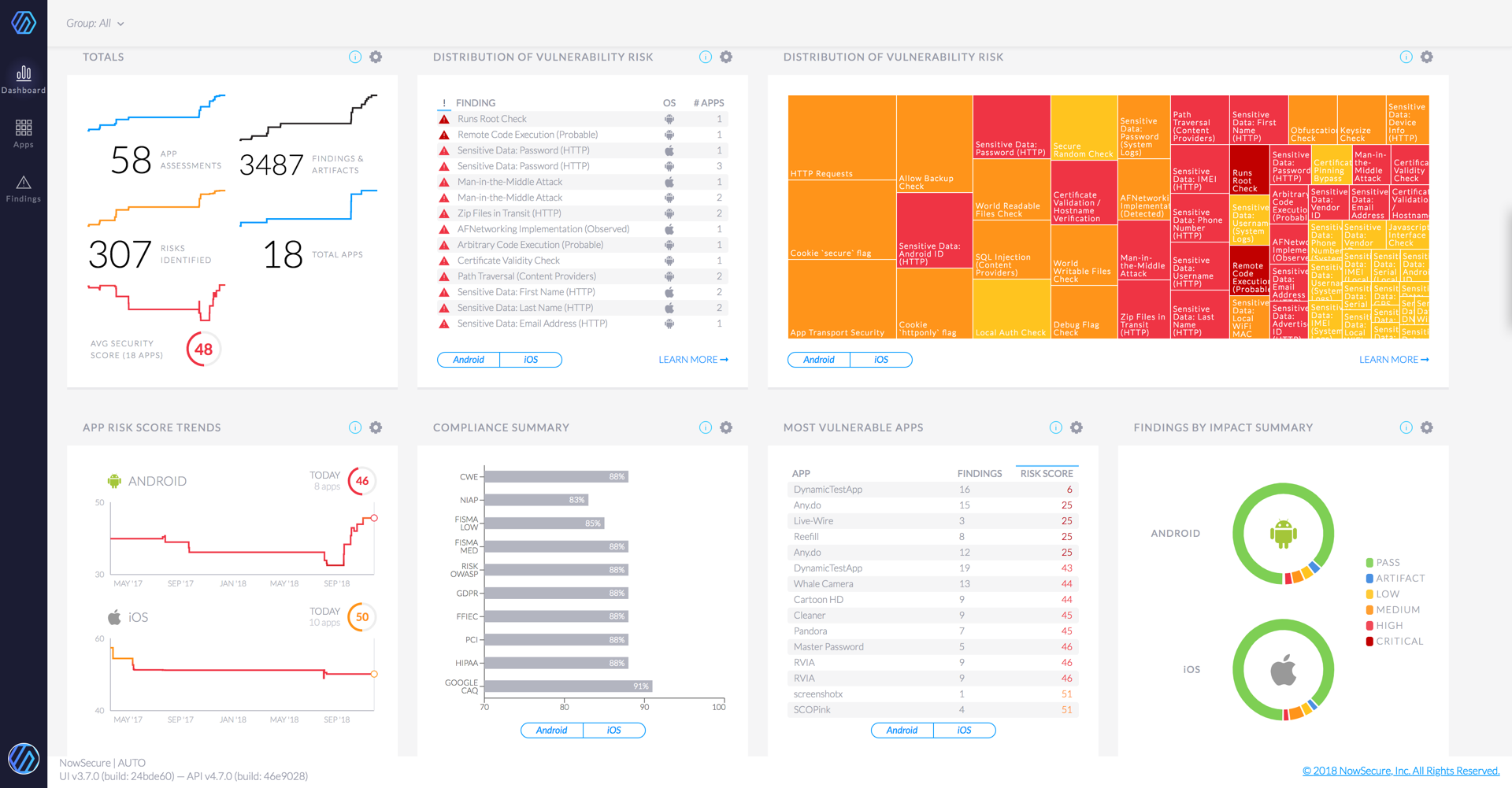 Like CircleCI, NowSecure AUTO is available in cloud or on-premises. Based on your team’s use cases, NowSecure AUTO can run on-demand with devs and security teams uploading binaries or fully automated plugged into CircleCI and other tools.

CircleCI delivers a comprehensive CI/CD environment tuned specifically for the mobile app development lifecycle. Integrate NowSecure directly with your dev toolchain to free up time to focus on building and delivering the secure, innovative mobile app experience that your users demand.