CircleCI runner enables you to use your own infrastructure for running jobs. This means you will be able to build and test on a wider variety of architectures, as well as have additional control over the environment. The diagram below illustrates how CircleCI runner extends our existing systems. 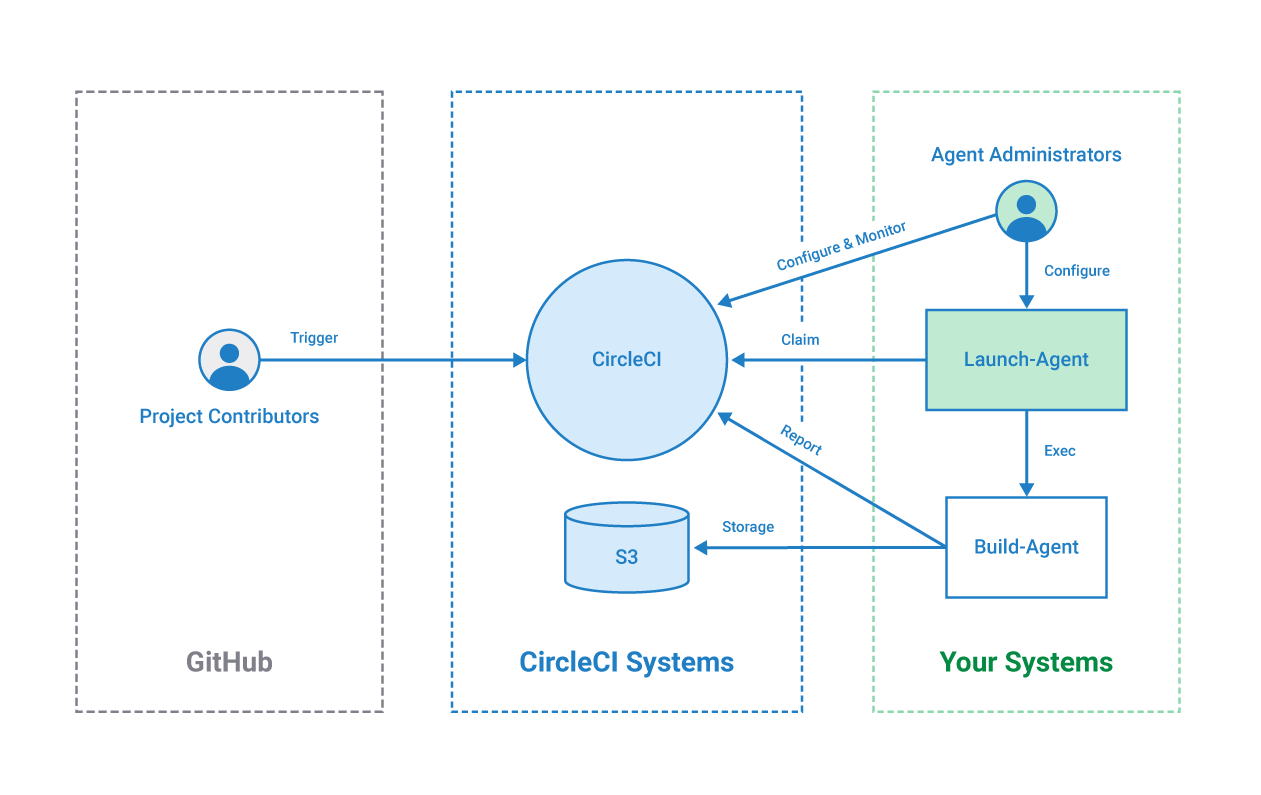 There are two key use cases CircleCI aims to meet with the runner:

Supported Level platforms ensure that CircleCI runners are both built and tested on their respective systems.

With a Supported platform, users receive the following:

Supported CircleCI runners are available on the following platforms:

On Preview Level platforms, CircleCI runners are currently in development, thus testing is not complete.

With a Preview platform, users receive the following:

Preview CircleCI runners are available on the following platforms:

To get started with CircleCI runner:

Once CircleCI runner is installed, the runner polls circleci.com for work, runs jobs, and returns status, logs, and artifacts to CircleCI. When the runner is not running a job, it will auto-update itself when a new version is released.

The runner consists of two components: the launch agent and the task agent.

The system has been designed to allow administrators to configure the task-agent to run with a lower level of privileges than the launch-agent. Any user who is able to execute a job will be able to gain the same privileges as task-agent. The instructions below are the recommended deployment which follows this approach (launch agent will run as root, but task agent will run as circleci).

To achieve better throughput, you can break your single build process into different steps and run them concurrently (at the same time). CircleCI offers the flexibility of deploying work to runners across all your resource classes.

CircleCI runner supports rerunning a job with SSH for debugging purposes. Instructions on using this feature can be found at Debugging with SSH.

CircleCI runner is not recommended for use with public projects that have the "Build forked pull requests" setting enabled. In this case, a malicious actor may alter your machine or execute code on it by forking your repository, committing code, and opening a pull request. Untrusted jobs running on your CircleCI runner pose significant security risks for your machine and network environment, especially if your machine persists its environment between jobs. Some of the risks include:

Referencing your runner on a job

After setting up the runner, you will need to reference it on a job by setting some fields in your .circleci/config.yml file. The fields you must set for a specific job to run using your runner are:

Here is a simple example of how you could set up a job:

The job will then execute using your runner when you push the config to your VCS provider.

Take the runner course with CircleCI Academy to learn more about running jobs on your infrastructure.