This is a guest post written by Karel Rochelt. It originally appeared on the Amio blog, and has been republished here with his permission. We hope you enjoy!

Providing an error-free API for a heavily developed project is not an easy task. Likely, the first things that come to mind are tests. For a mid-sized API, you may write hundreds or even thousands of end-to-end tests. These tests significantly prolong build times. In this post, we will explain how we solved long build times with CircleCI test parallelism and Gradle/Grails for Amio’s main service.

CircleCI’s documentation does a decent job of explaining how their command line interface (CLI) tool should be used to enable test parallelism. When I started looking into it for the first time, it wasn’t entirely obvious what the returned result would look like. I was asking myself, “So, I’ll just run this command and it will magically start splitting my tests?” Well, of course not! The result is just a list of test files that should be executed on a particular container. Does that sound complicated? Let me explain in an example.

The first thing we have to do is to set the parallelism key in the .circleci/config.yml file. From the CircleCI docs:

The parallelism key specifies how many independent executors will be set up to run the steps of a job.

Any value greater than one will enable parallel execution, but for the sake of this example, let’s go with two. This way, every time a CircleCI job is started, it will spawn two containers which will both do the same tasks. If we were to use the parallelism key with no additional configuration, it would just run all of our tests twice. That is not what we want. We want to split our tests between the containers. That’s where the CircleCI CLI comes in. It offers two commands which, when used together, split our tests into equal portions across our two containers.

Let’s say these are the test files in our project:

Naturally, we will have other source files in our project; not just our tests. They may be located in the same src/integration-test/… directory. To achieve our goal of test splitting, we need to select only the test files for the project. That is done by using the glob command:

This command will output the list of our tests (all 5 of them). 🎉 Now we use the split command to, well, split them between containers:

The split command offers several strategies to split the tests but timings is my favorite. It uses the timings data that is collected by CircleCI (this has to be enabled via the store_test_results key) to split the tests into portions that take similar time to execute. Container indexing is automatic, which means we can run the same command on every container. In our example, running the command on Container 0 might output:

I say “might” because the real result would depend on the timings data. As you can see, every container got its half of the tests.

Splitting the tests in CircleCI was the easy part. The hard part is getting Gradle to execute just the tests that are in the result of the split command. If we were using JavaScript and Mocha, it would be much easier, since Mocha accepts a list of files which should be executed. With Gradle 3, I had been using this command to run tests: ./gradlew check -i

Gradle’s documentation isn’t really helpful. Just figuring out what the check task does is a pain. Thankfully, it is possible to pass our test list as a parameter to the Gradle task.

Now, when the check task is started it has access to the testFilter parameter. To make everything work, we also need to add some code that can handle the parameter in our build.gradle:

Note that the parameter was passed to the task as a single string. In the codeblock above, Line 3 contains logic to split it back into rows. Calling include will tell Gradle to execute only the tests that we include. Now we can include all the rows and we’re good, right? Nope. Gradle doesn’t know how to work with source files. It only understands classes. We need to pass the compiled class files to it. There are two problems with that. First, the compiled classes are not in the same directory. Second, the suffix is not .groovy but .class. To overcome the first problem, we replaced the common prefix with **/, which basically says, “Look in the root directory and all its subdirectories.” Of course, you could replace it with something like build/classes/integrationTest/com. That is cleaner, but not necessary. This should be safe as long as the test classes name’s are unique. Line 5 in the codeblock above includes logic that solves both of these problems.

In the end, your .circleci/config.yml should look something like this (just the relevant part):

And that’s it! Easy, right? Well, maybe it was a bit more work than it should have been, but having our test times cut nearly in half was definitely worth it! Applying test parallelism, we’ve decreased the overall build time from around 15 minutes to 9 minutes. 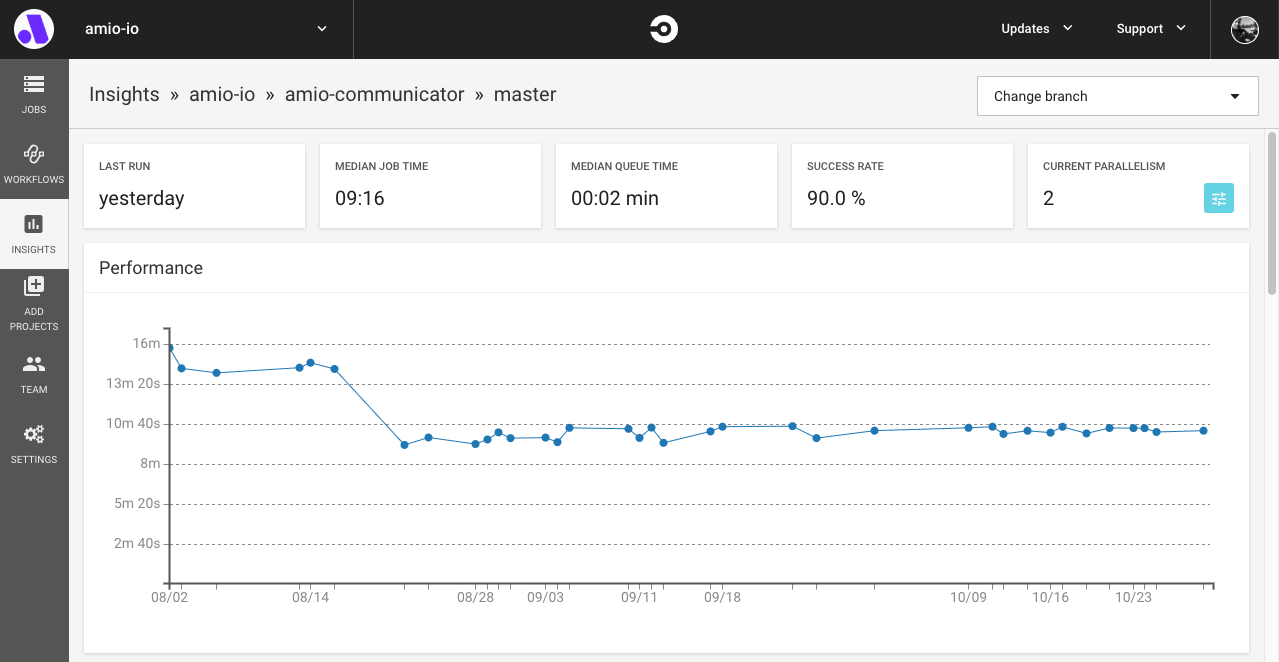 Karel Rochelt is a full-stack developer at Amio.io. A skeptical optimist with a passion for quality and a “do more with less work” attitude.