Create and manage contexts on the Organization Settings page of the CircleCI application. You must be an organization member to view, create, or edit contexts. After a context has been created, you can use the context key in the workflows section of a project config.yml file to give any job(s) access to the environment variables associated with the context, as shown in the image below. 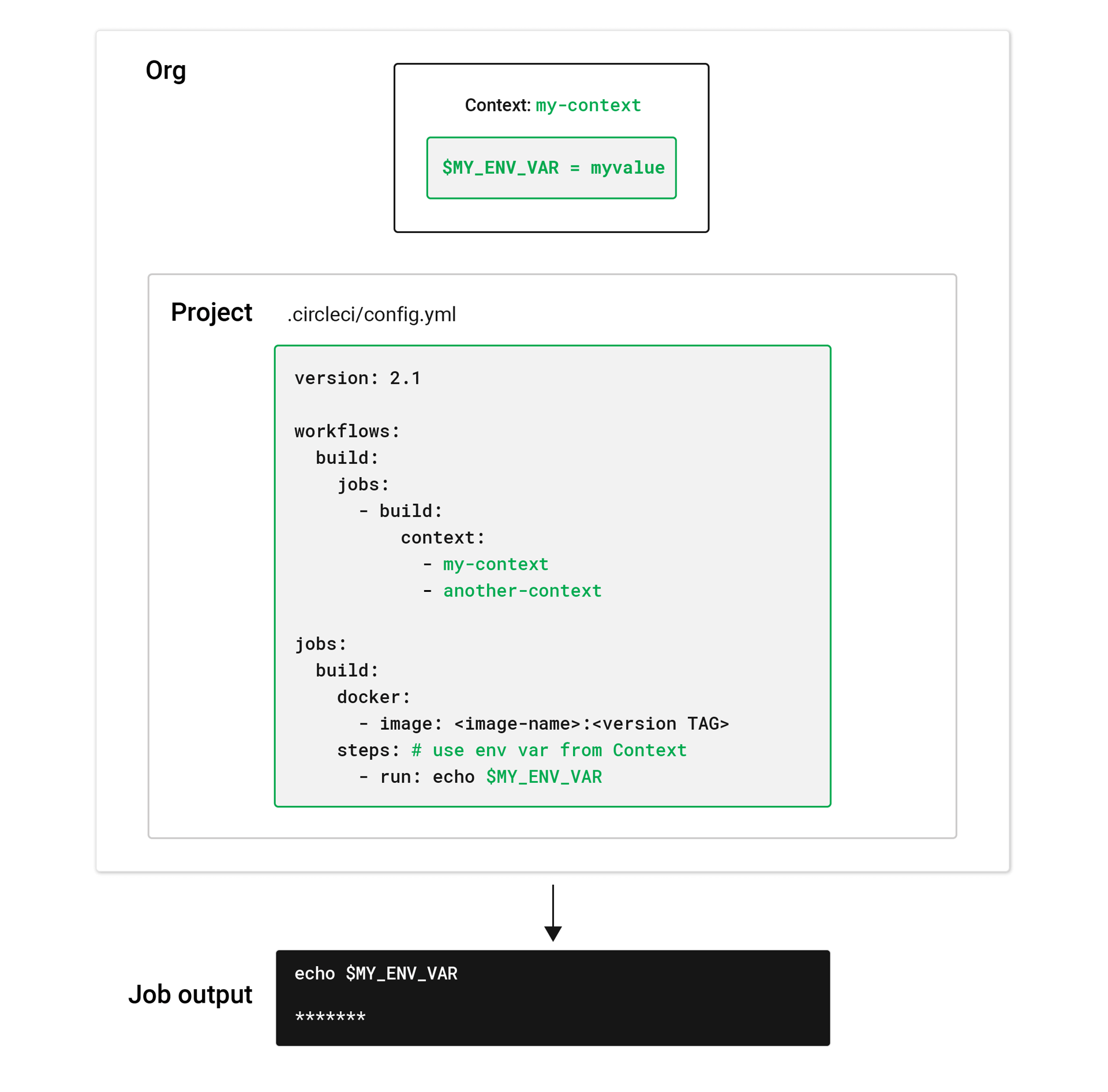 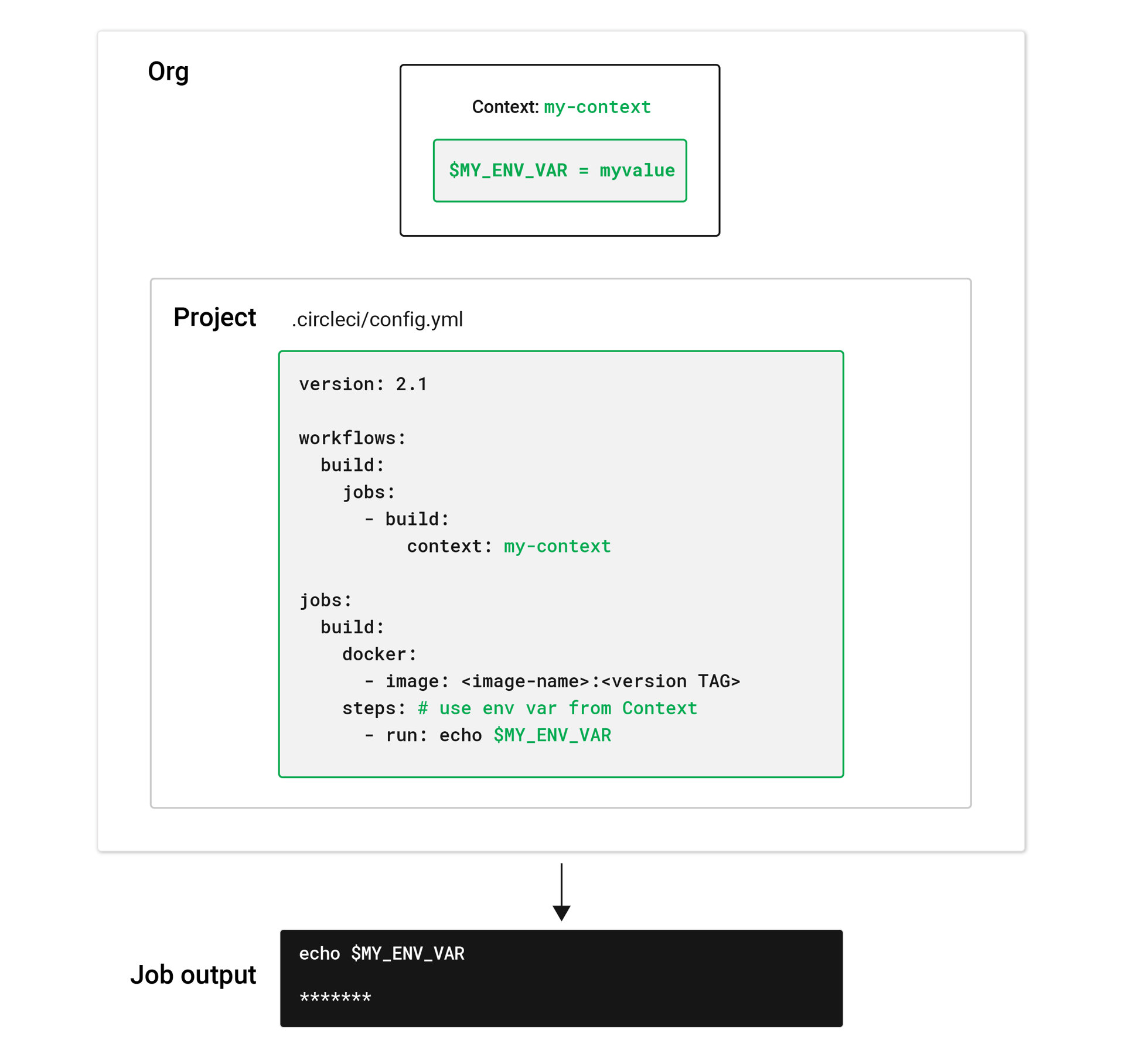 To use environment variables set on the Contexts page, the person running the workflow must be a member of the organization for which the context is set.

Context names must be unique for each GitHub or Bitbucket organization.

Note: Contexts created with the initial default name of org-global will continue to work.

If you find you need to rename an org or repo that you have previously hooked up to CircleCI, best practice is to follow these steps:

Creating and using a context

Moving a repository that uses a context

You can combine several contexts for a single job by just adding them to the context list. Contexts are applied in order, so in the case of overlaps, later contexts override earlier ones. This way you can scope contexts to be as small and granular as you like.

The default security group is All members and enables any member of the organization who uses CircleCI to use the context.

Note: Bitbucket repositories do not provide an API that allows CircleCI contexts to be restricted, only GitHub projects include the ability to restrict contexts with security groups.

Running workflows with a restricted context

To invoke a job that uses a restricted context, a user must be a member of one of the security groups for the context and must sign up for CircleCI. If the user running the workflow does not have access to the context, the workflow will fail with the Unauthorized status.

Restrict a context to a security group or groups

You must be an organization administrator to complete the following task.

Only members of the selected groups may now use the context in their workflows or add or remove environment variables for the context.

Changes to security group restrictions for Contexts might not take effect immediately due to caching. To make sure settings are applied immediately, it is best practice for the Org Administrator to refresh permissions once the change has been made. The Refresh Permissions button can be found on the Account Integrations page.

Administrators of CircleCI Server installations can find the Refresh Permissions button at <circleci-hostname>/account.

Approving jobs that use restricted contexts

In this example, the jobs test and deploy are restricted, and will only run if the user who approves the hold job is a member of the security group assigned to the context deploy-key-restricted-context. When the workflow build-test-deploy runs, the build job will run, then the hold job, which presents a manual approval button in the CircleCI application. This approval job may be approved by any member of the security group, but the jobs test and deploy will fail as unauthorized if the “approver” is not part of the restricted context security group.

To make a context available only to the administrators of the organization, you may remove all of the groups associated with a context. All other users will lose access to that context.

Adding and removing users from teams and groups

CircleCI syncs GitHub team and LDAP groups every few hours. If a user is added or removed from a GitHub team or LDAP group, it will take up to a few hours to update the CircleCI records and remove access to the context.

Addition and deletion of environment variables from a restricted context is limited to members of the context groups.

If the context is restricted with a group other than All members, you must be a member of that security group to complete this task:

Environment variables are used according to a specific precedence order, as follows:

Contexts hold project secrets or keys that perform crucial functions for your applications. For added security CircleCI performs secret masking on the build output, obscuring the echo or print output of contexts.

The value of the context will not be masked in the build output if: