One of the key indicators of a healthy codebase is good test coverage. Once you’ve bought into the value of CI/CD, it makes sense to use a test coverage service to track changes to your project’s test coverage over time. Not only will it ensure tests increase at the same rate as code, it can also help you control your development workflow with pass/fail checks and PR comments showing where coverage is lacking and how to improve it.

In this tutorial, we’re going to put a simple codebase with test coverage into a CI pipeline on CircleCI, then configure CircleCI to send our project’s test coverage results to Coveralls, a popular test coverage service used by some of the world’s largest open source projects.

We’re going to do this by employing CircleCI’s orb technology, which makes it fast and easy to integrate with third-party tools like Coveralls.

Note: We’ll create a free Coveralls account along the way.

If you’re new to test coverage, here’s how it works:

How it works in CI/CD

A simple app with test coverage

Here’s an extremely simple Ruby project which employs both tests and test coverage:

(Find it on GitHub here.)

This is the totality of the code in this project:

And these are the tests:

Note: Right now, only one of the two methods in ClassOne is being tested.

We’ve installed our test coverage library, Simplecov, as a gem in our Gemfile:

And we’ve passed a configuration setting to Simplecov in our spec/spec_helper.rb telling it to ignore files in our test directory:

Let’s run the test suite for the first time and see the results:

Note: In addition to the test results themselves, Simplecov is telling us it generated a test coverage report for us in a new /coverage directory.

Conveniently, it generated those results in HTML format, which we can open like this: 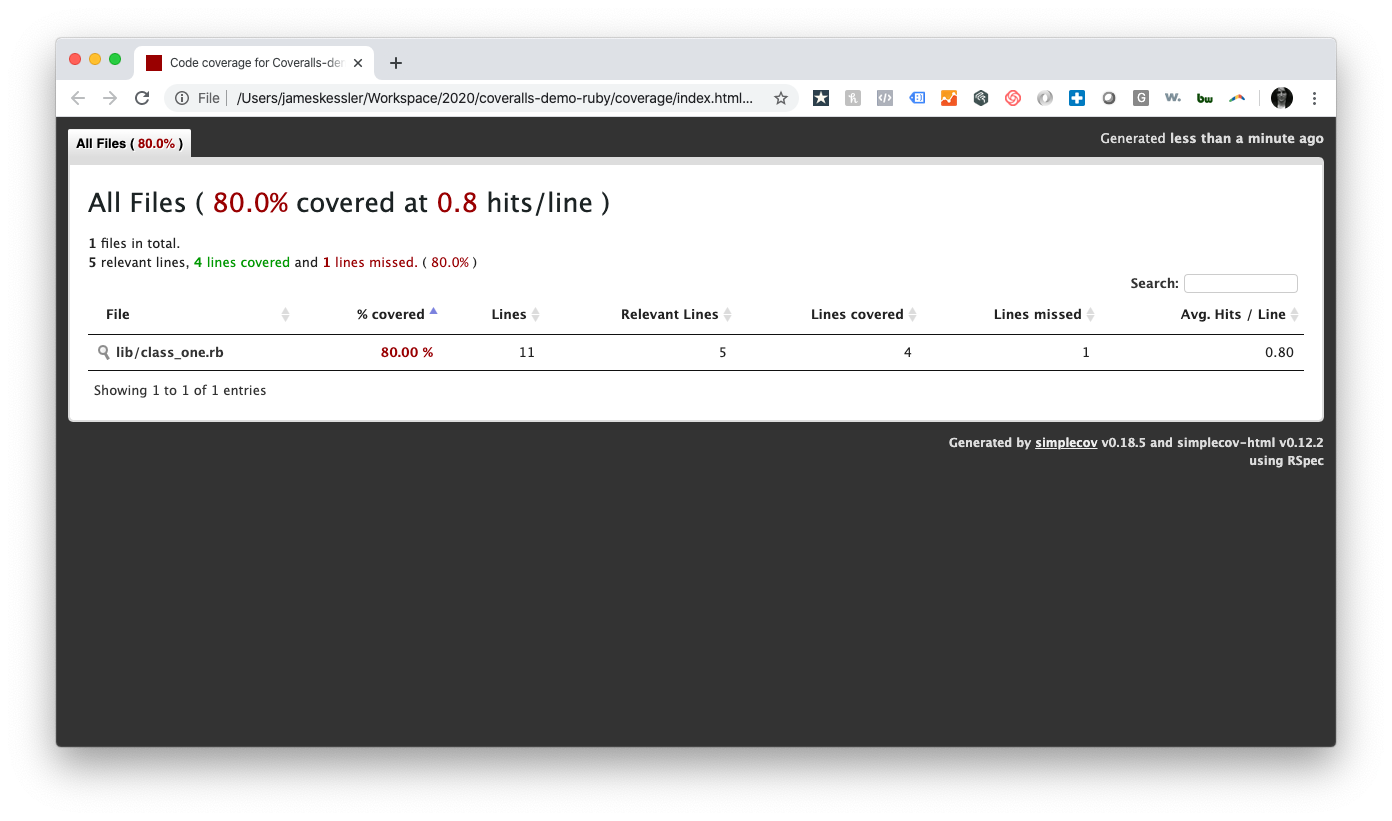 Where coverage stands at 80% for the entire project.

Clicking on lib/class_one.rb brings up results for the file: 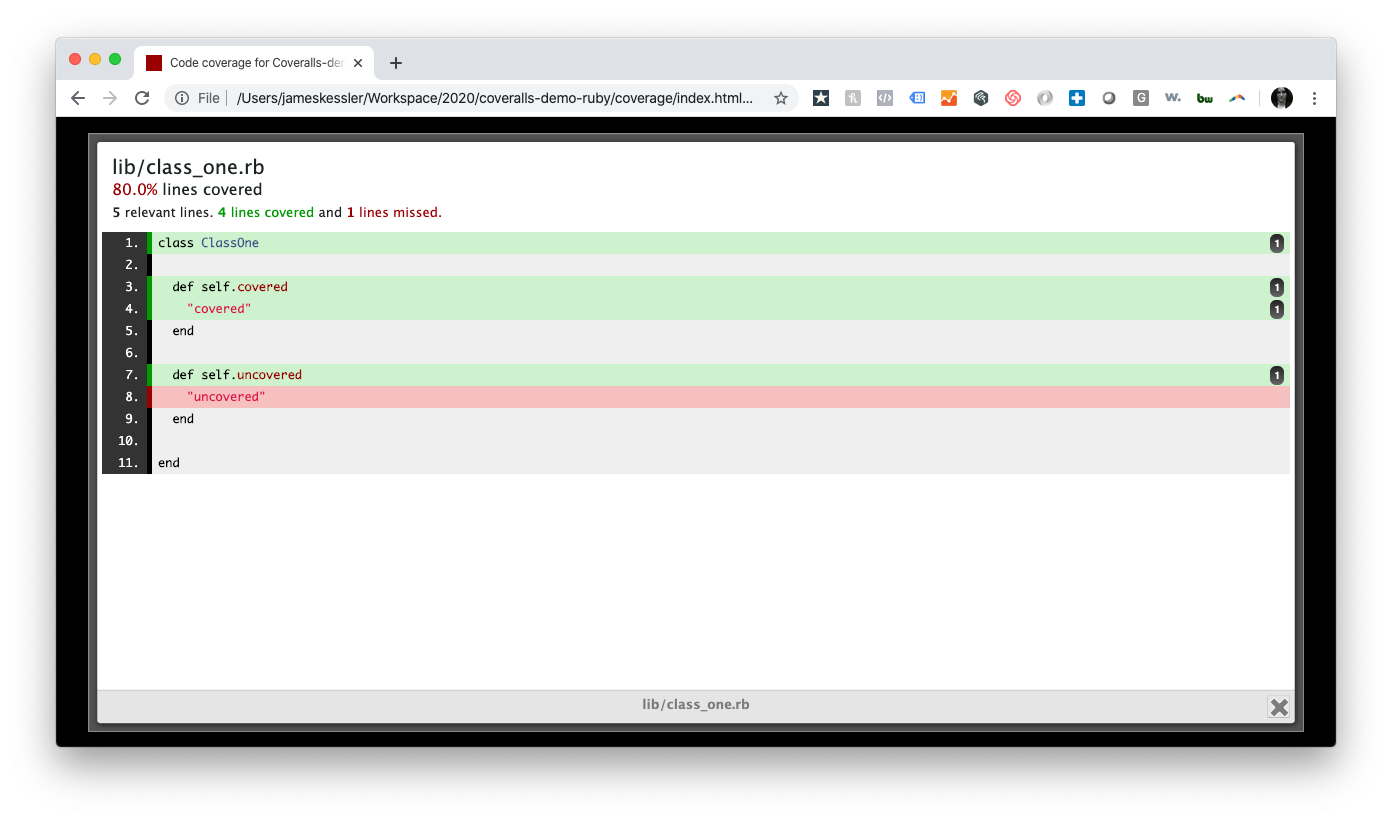 In our case, 4/5 lines are covered, translating to 80% coverage.

To add tests, un-comment the test of the second method in ClassOne:

Open the new results at coverage/index.html. 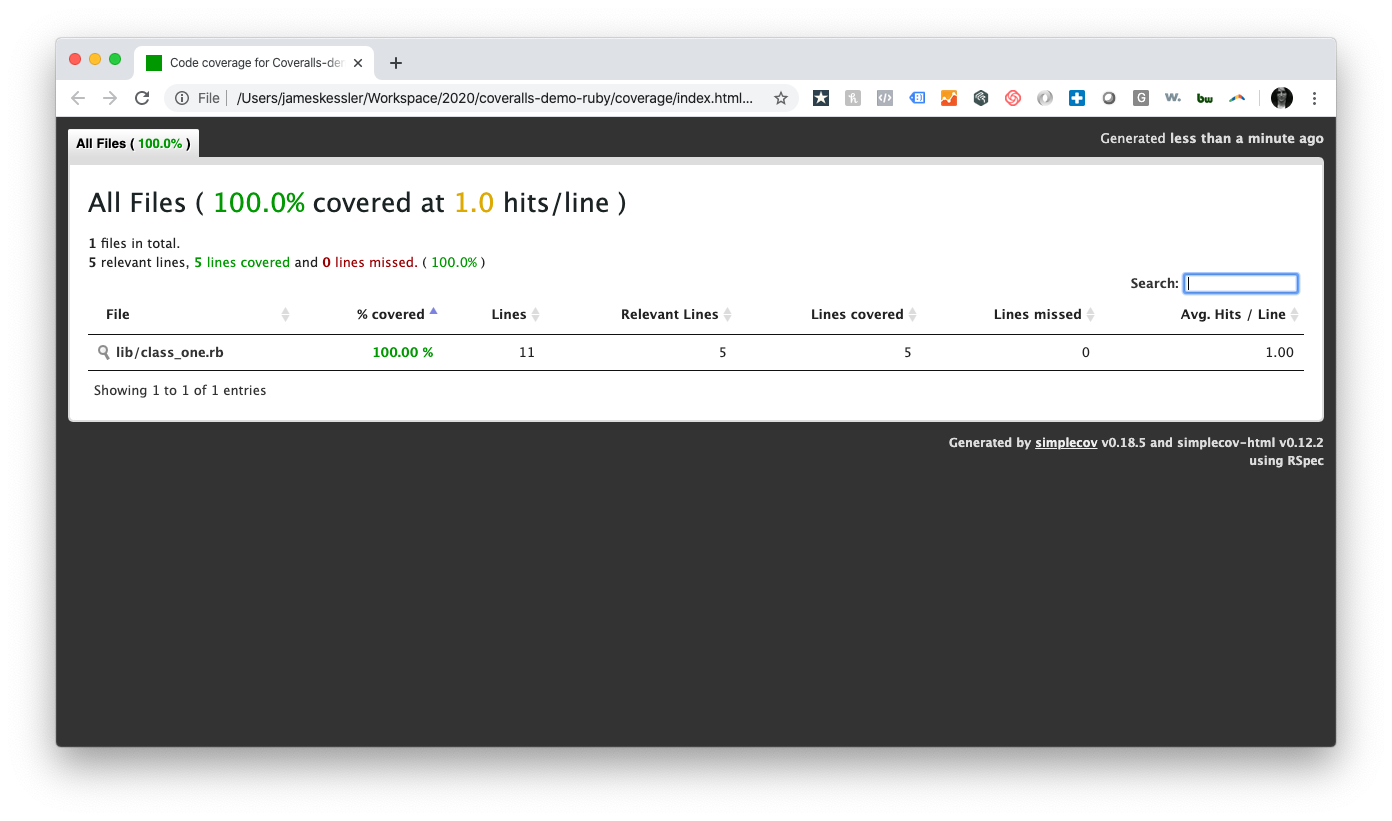 And now, if we click on lib/class_one.rb we see: 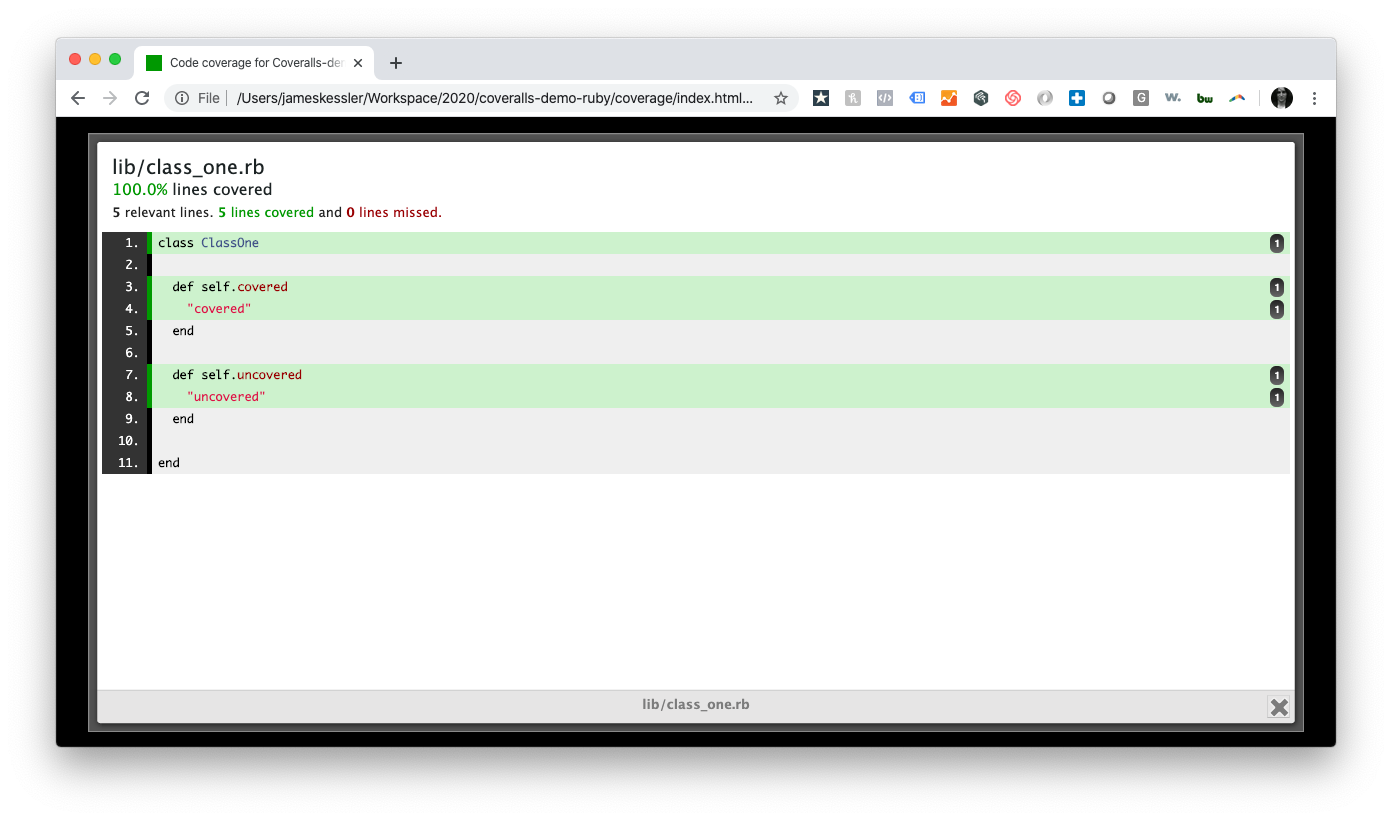 Five out of five relevant lines are now covered, resulting in 100% coverage for the file, which means 100% total coverage for our one-file project.

Setting up the CI pipeline

Now that we understand how test coverage works in this project, we’ll soon be able to verify the same results through Coveralls.

First we’ll need to set up the CI pipeline.

Adding the project to CircleCI

Note: If you want to follow along, now’s a good time to fork the project from this repo and clone it down to your local machine. Once you’ve done that, you can follow these steps with your own copy. From here on we’ll assume you’re starting with a fresh project with no changes to the original. In other words, with test coverage starting at 80%.

To add a new public repo to CircleCI, Log in with your GitHub login: 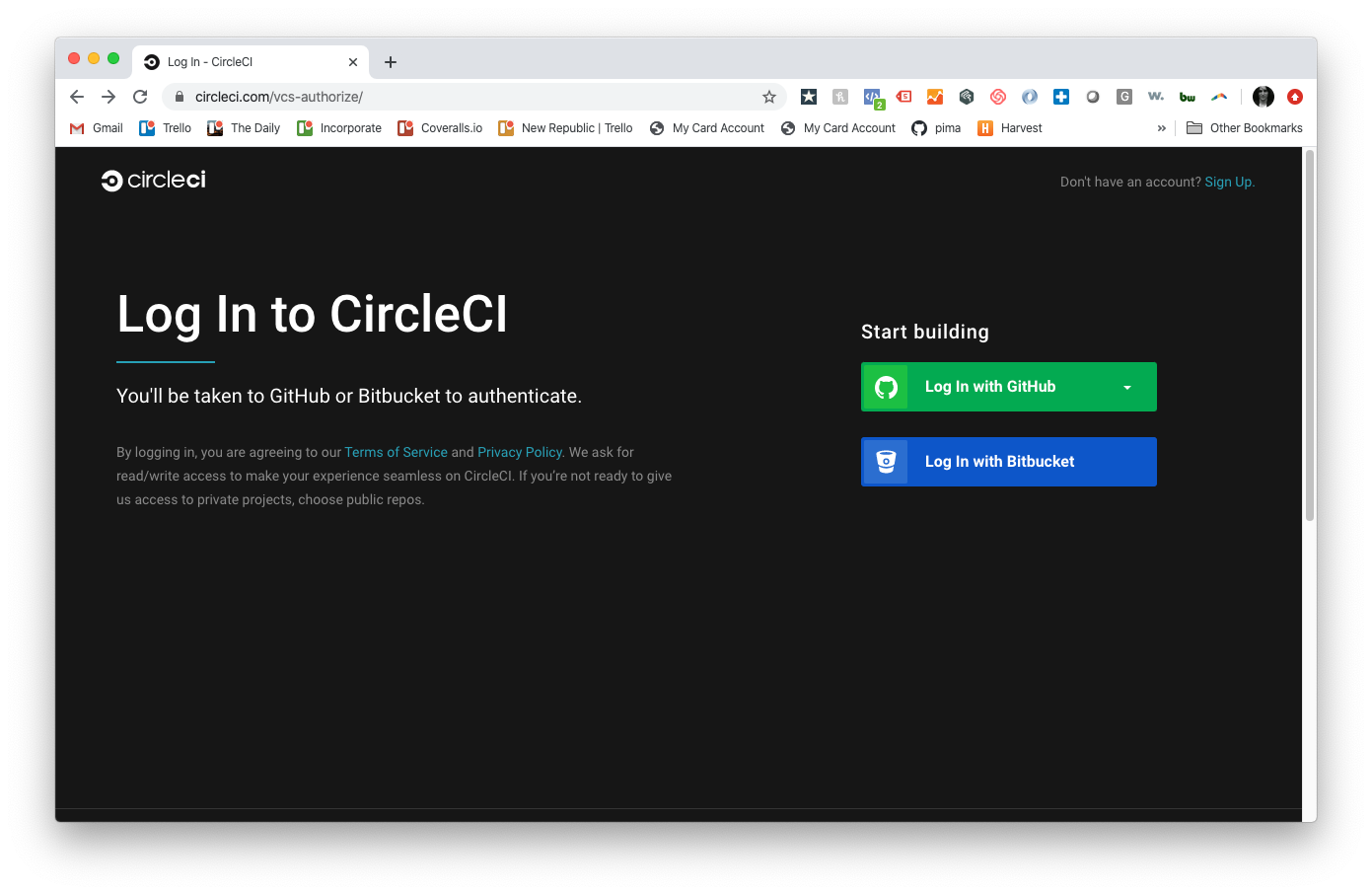 If you belong to multiple GitHub organizations, select the one that applies to your project: 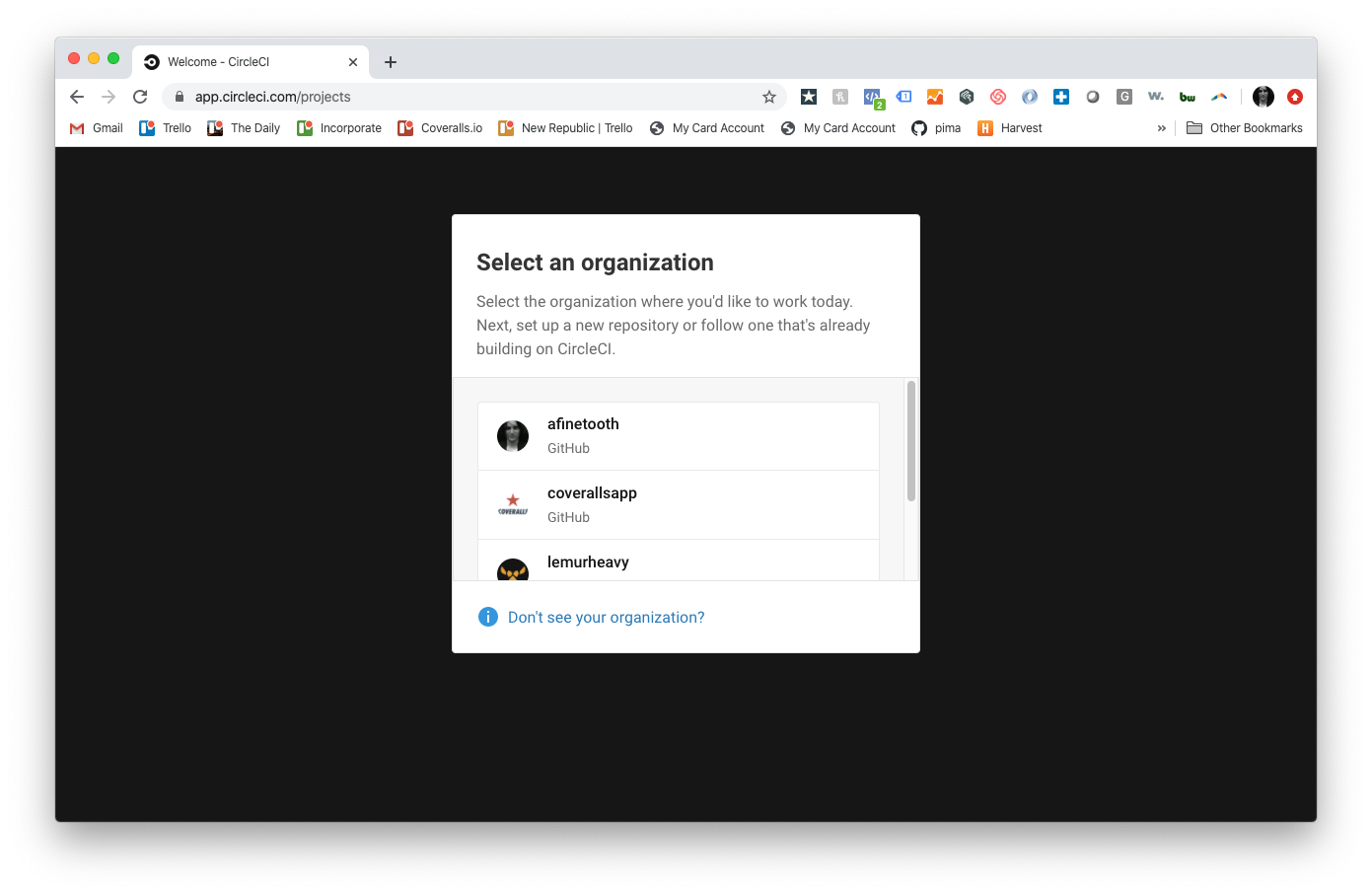 Then you’ll see the list of GitHub projects for your organization: 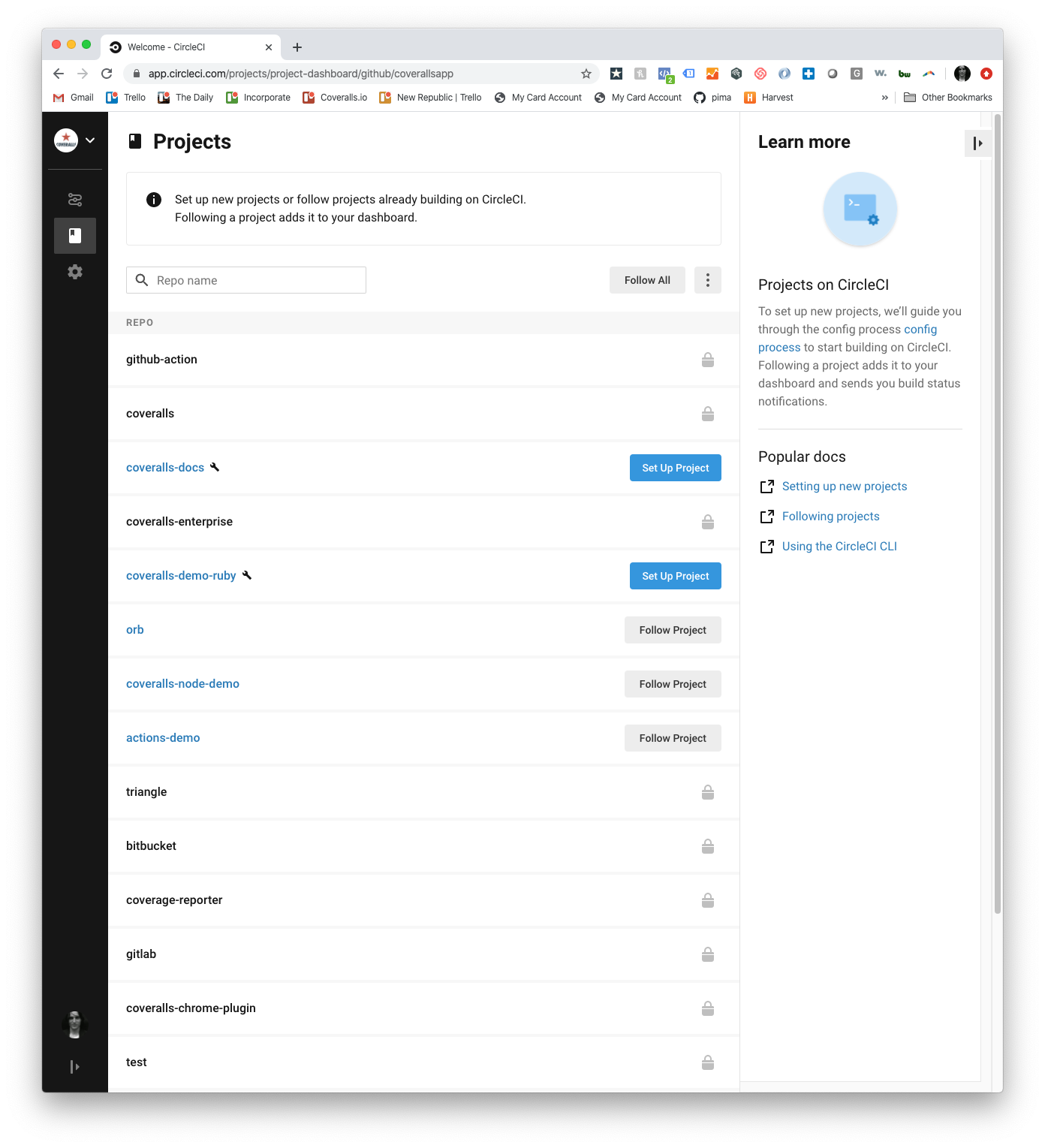 Click Set Up Project next to your new project:

Then you’ll see the New Project Set Up page: 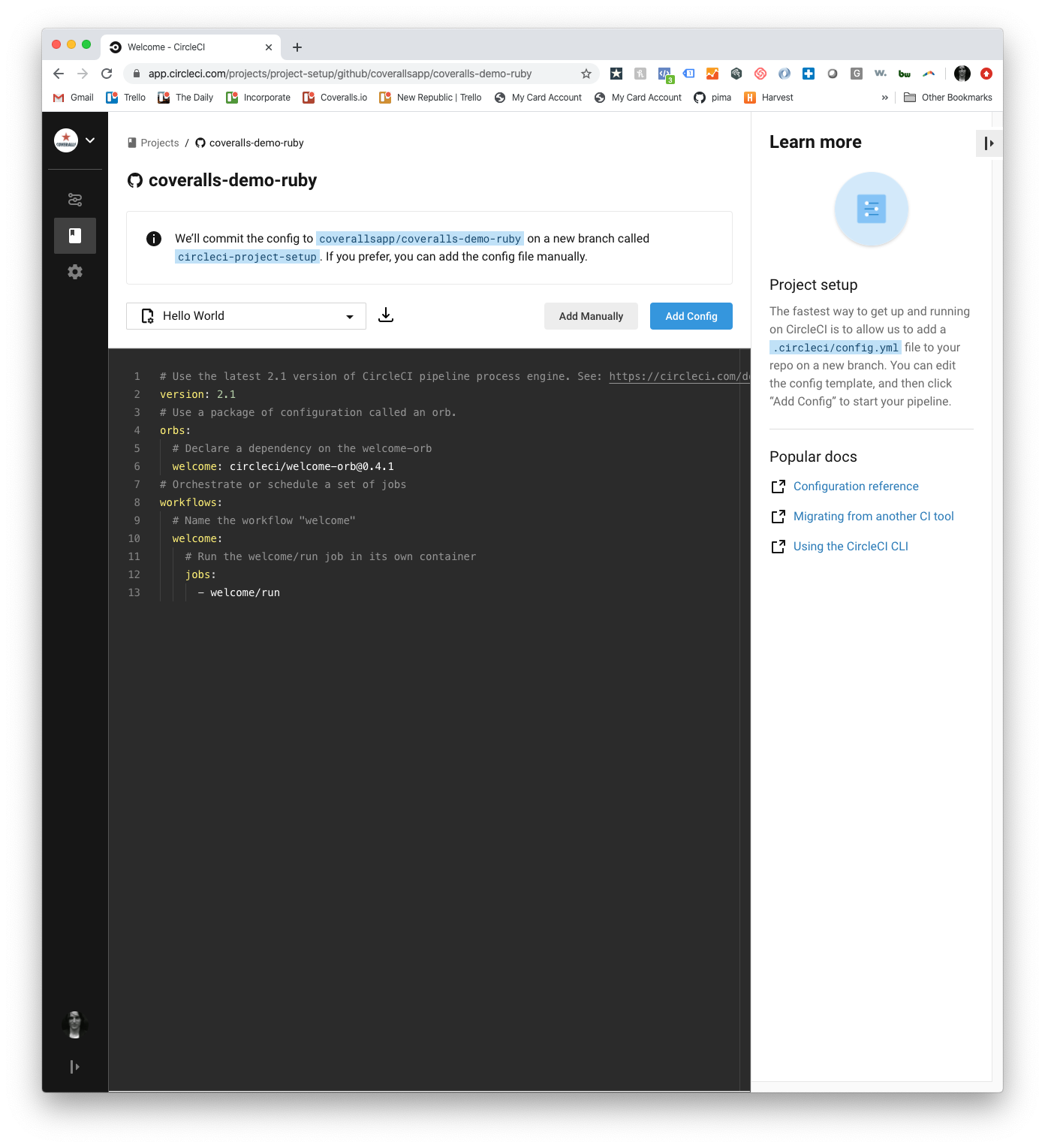 Here, you have the choice to let CircleCI walk you through setting up your project, or add your own config file manually.

We’re going to add our config file manually in order to get a closer look, so click Add Manually:

You’ll receive a prompt asking if you’ve already added a ./circle/config.yml file to your repo: 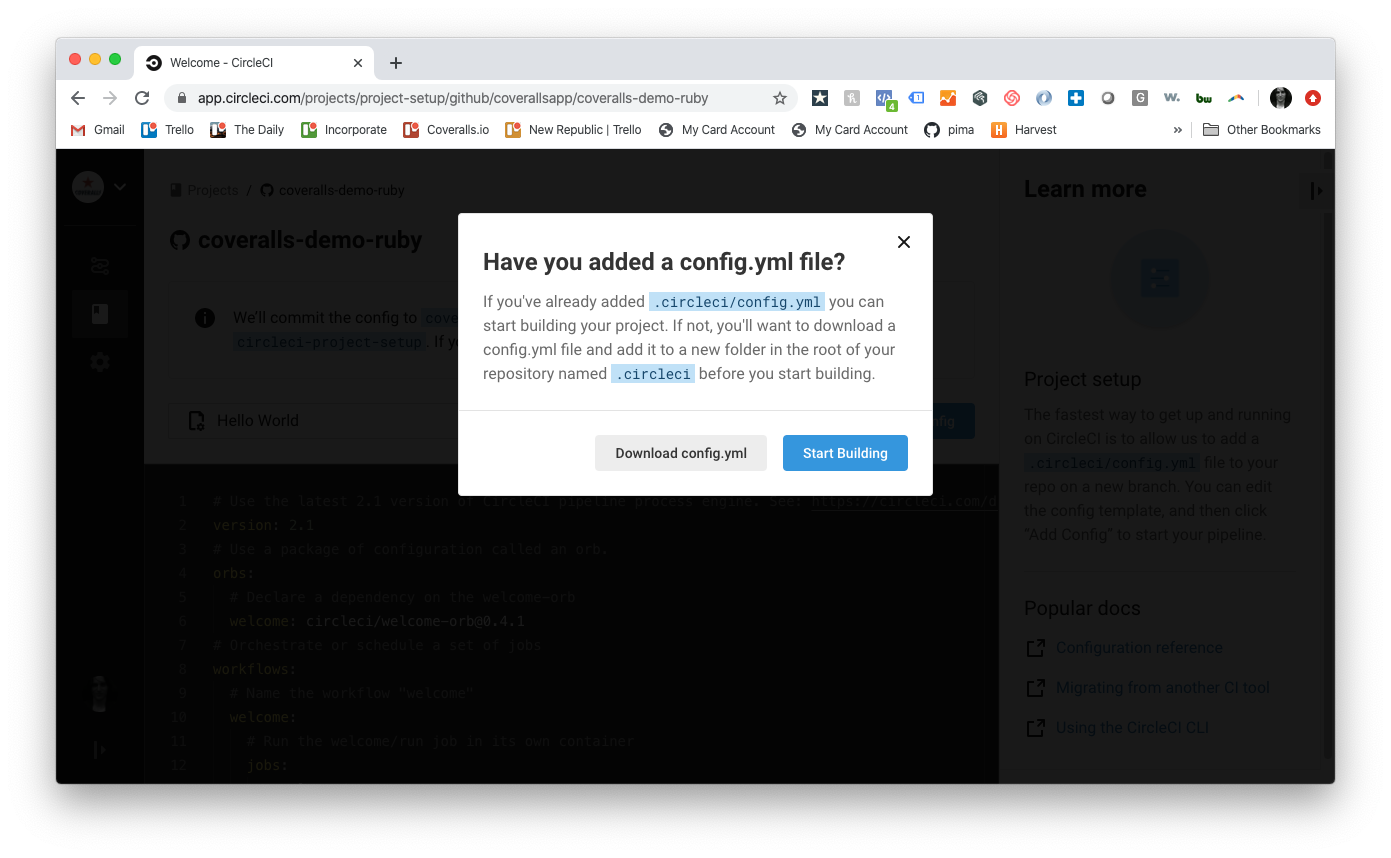 Adding a configuration file to the project repo

At the base directory of your project, create a new, empty file called .circleci/config.yml.

What do those config settings mean?

It’s worth pointing out that we’re using v2.1 of CircleCI’s configuration spec for pipelines, the latest version, and this is indicated at the top of our file:

Two of the core concepts of the v2.1 config spec are orbs and workflows.

Orbs are reusable packages of configuration that can be used across projects for convenience and standardization. Here we’re leveraging CircleCI’s newly provisioned Ruby orb, which makes quick work of setting up a new Ruby project.

This invokes a job we’ve defined, called build, that checks out our code, installs our dependencies, and runs our tests in the CI environment–a Docker image running Ruby 2.6.5 and Node:

Note that in the final step of our job, we’re using a built-in command for running RSpec tests that comes with CircleCI’s new Ruby orb, called rspec-test:

Not only does this provide a one-liner for running our RSpec tests, it also gives us some freebies, including automated parallelization and a default test results directory.

It allows us to run tests from our test suite in parallel, which improves speed and is particularly handy when running a lot of tests. For more hands-on practice, see this tutorial on test splitting in CircleCI.

Why a default test results directory?

As a convenience, this gives us a single place to store our test results in our CI environment, already merged from any parallel runs.

Save the file, commit it, and push:

That’s it! CircleCI is building your project in its remote CI environment.

CircleCI started building your project the moment you pushed that last commit:

To prove that to yourself, just visit your project at CircleCI.

For me, that meant going here:
https://app.circleci.com/pipelines/github/coverallsapp/coveralls-demo-ruby

Your URL will be different, but should follow this format:

Our first build has failed: 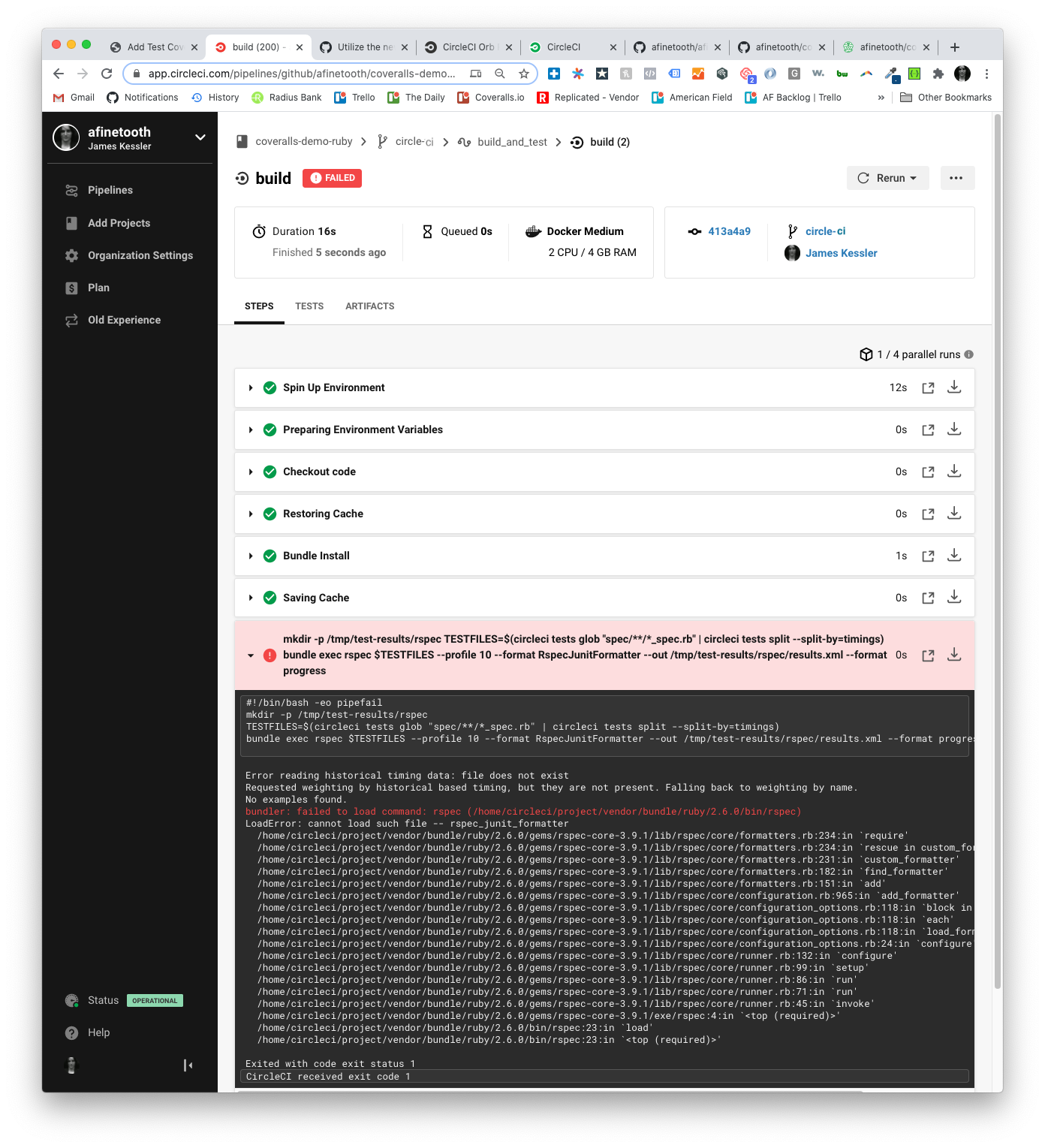 The CircleCI Ruby orb seems to be looking for rspec_junit_formatter, which, upon reviewing the orb docs, makes sense: https://circleci.com/developer/orbs/orb/circleci/ruby#commands-rspec-test

The notes on the rspec-test command read:

So let’s do just that.

Install the rspec_junit_formatter gem in your Gemfile:

Then check our build again… and - great! 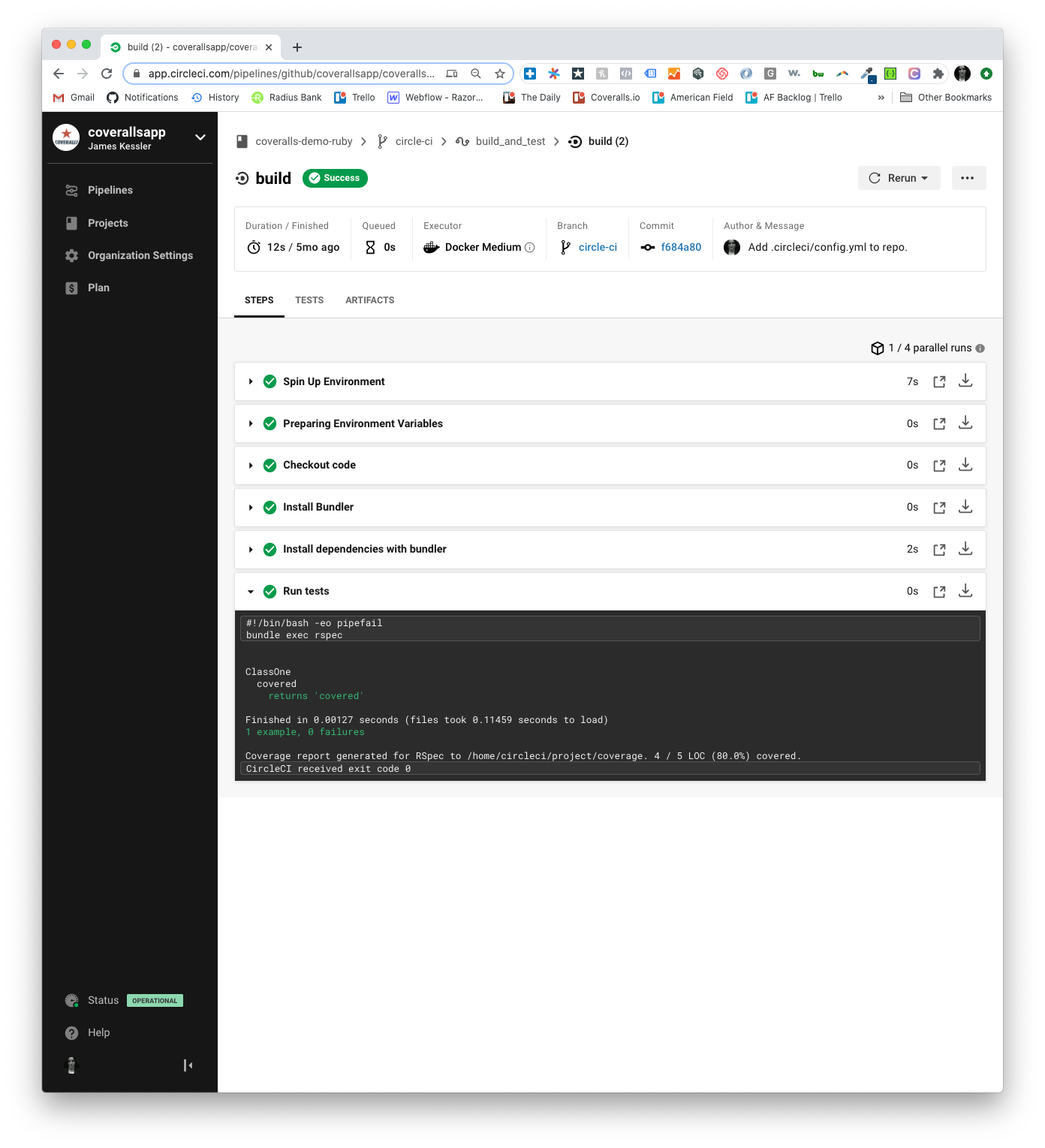 Notice those test results, which look much like those we got when running locally:

Just like in our local environment, Simplecov is generating a coverage report and storing it in the /coverage directory.

We now have test coverage in CI.

Configuring the project to use Coveralls

We’re in luck here, since Coveralls has published a Coveralls orb following the CircleCI orb standard, which makes this plug-and-play.

But before we can set this up, we’ll need to create a new account at Coveralls, which is free for individual developers with public (open source) repos.

Adding the project to Coveralls

To add your repo to Coveralls, go to http://coveralls.io/sign-in and sign in with GitHub: 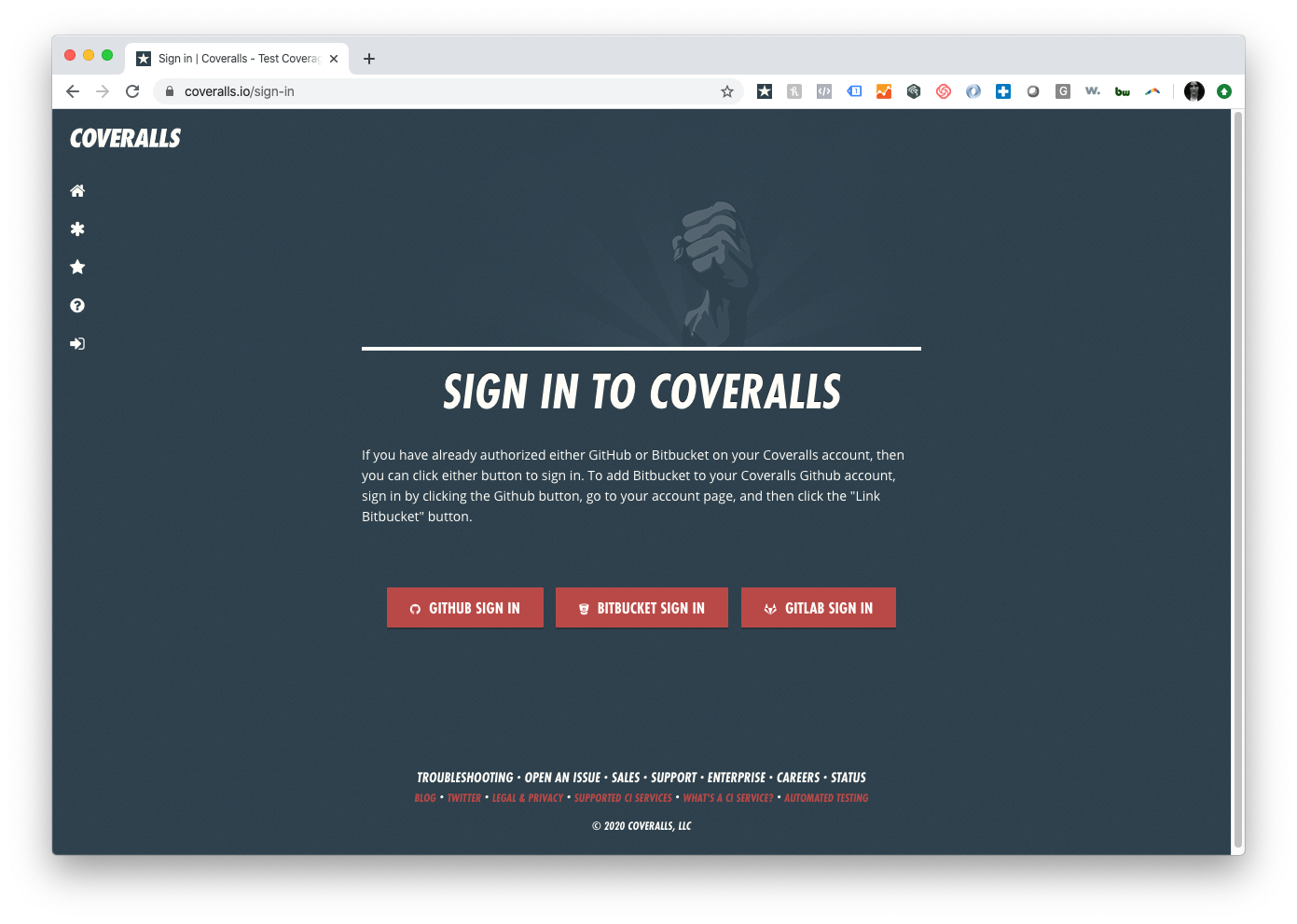 Upon first sign-in, you won’t have any active repos, so go to Add Repos and find a list of your public repos: 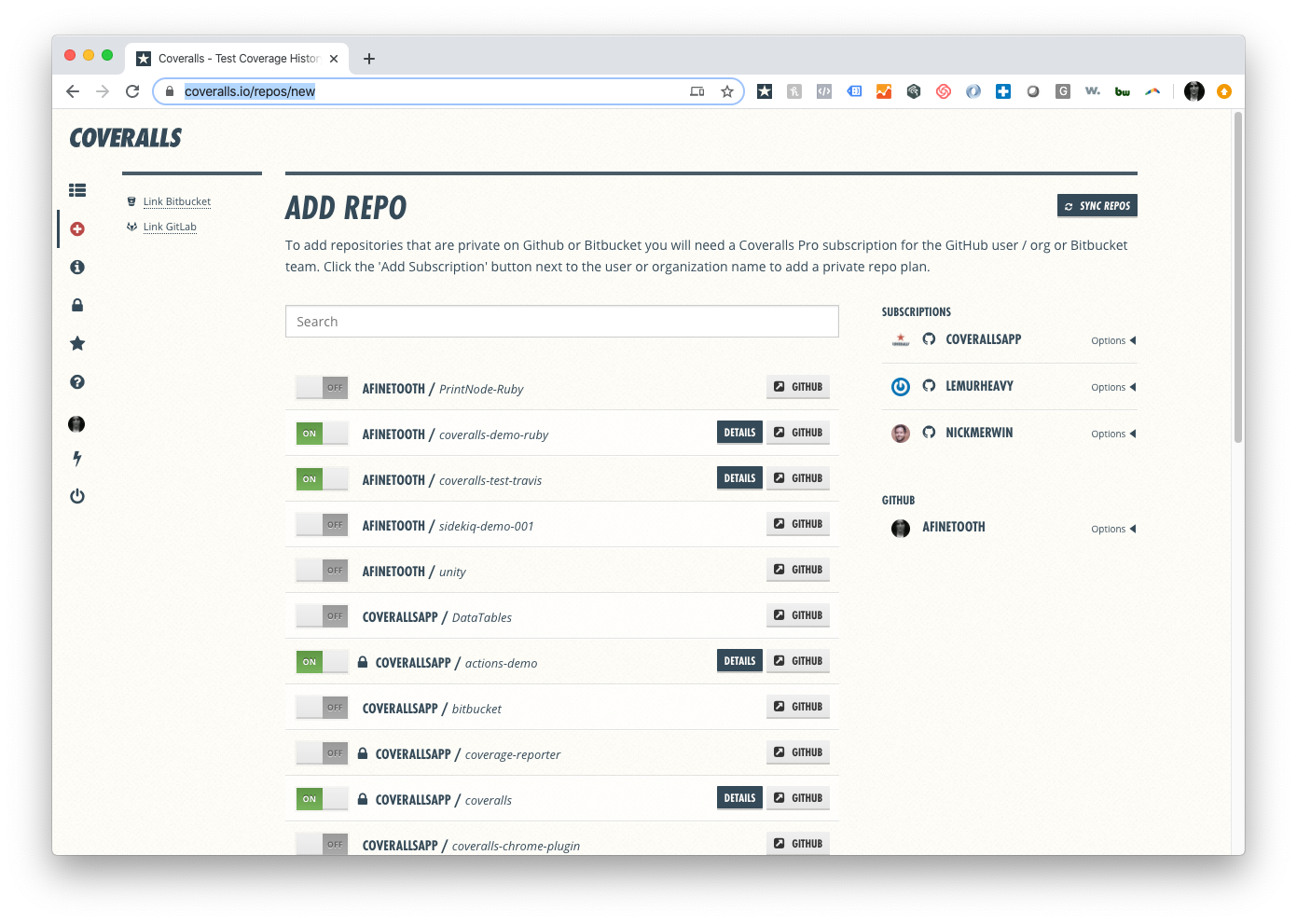 To add your repo, simply click the toggle control next to your repo name, switching it to ON:

Prior to the release of the Coveralls orb, the default approach to setting up a Ruby project to use Coveralls would be to install the Coveralls RubyGem, which leverages Simplecov as its main dependency and takes care of uploading Simplecov’s results to Coveralls.

However, to stick with the v2.1 config at CircleCI, and to leverage the benefits of CircleCI’s new Ruby orb, we’ll set up the Coveralls orb to work with the Ruby orb.

Preparing to use the Coveralls orb

Now the first consideration, which is a little counterintuitive, is that the Coveralls orb is written in Javascript, rather than Ruby, with a dependency of Node. This is no matter though, since, if you recall, we configured the Ruby orb to install a Docker image containing both Ruby and Node:

However, another requirement of the Coveralls orb is that it expects test coverage reports in LCOV format. So to meet that requirement, we’ll make a few more changes to our project.

First, we’ll add the simplecov-lcov gem to our Gemfile:

Here we require simplecov-lcov, and we tell Simplecov to do two things:

Next, we’ll add the Coveralls orb to the orbs section of our .circelci/config.yml:

And in the jobs section, we’ll add a new step to our build job:

That command, coveralls/upload, calls the Coveralls orb’s upload command. And below it, we’ll pass the path_to_lcov parameter, which tells the orb where to find the coverage report it should upload to the Coveralls API.

Finally, if you’re using a private CI service like CircleCI, the Coveralls API requires an access token to securely identify your repo. This is called your COVERALLS_REPO_TOKEN.

You’ll encounter this if you visit the start page for your Coveralls project before you have any builds:

But you can also grab it at any time from your project’s Settings page:

To let CircleCI POST securely to the Coveralls API on behalf of your repo, just add your COVERALLS_REPO_TOKEN as an environment variable in the CircleCI web interface under Project Settings > Environment Variables like so: 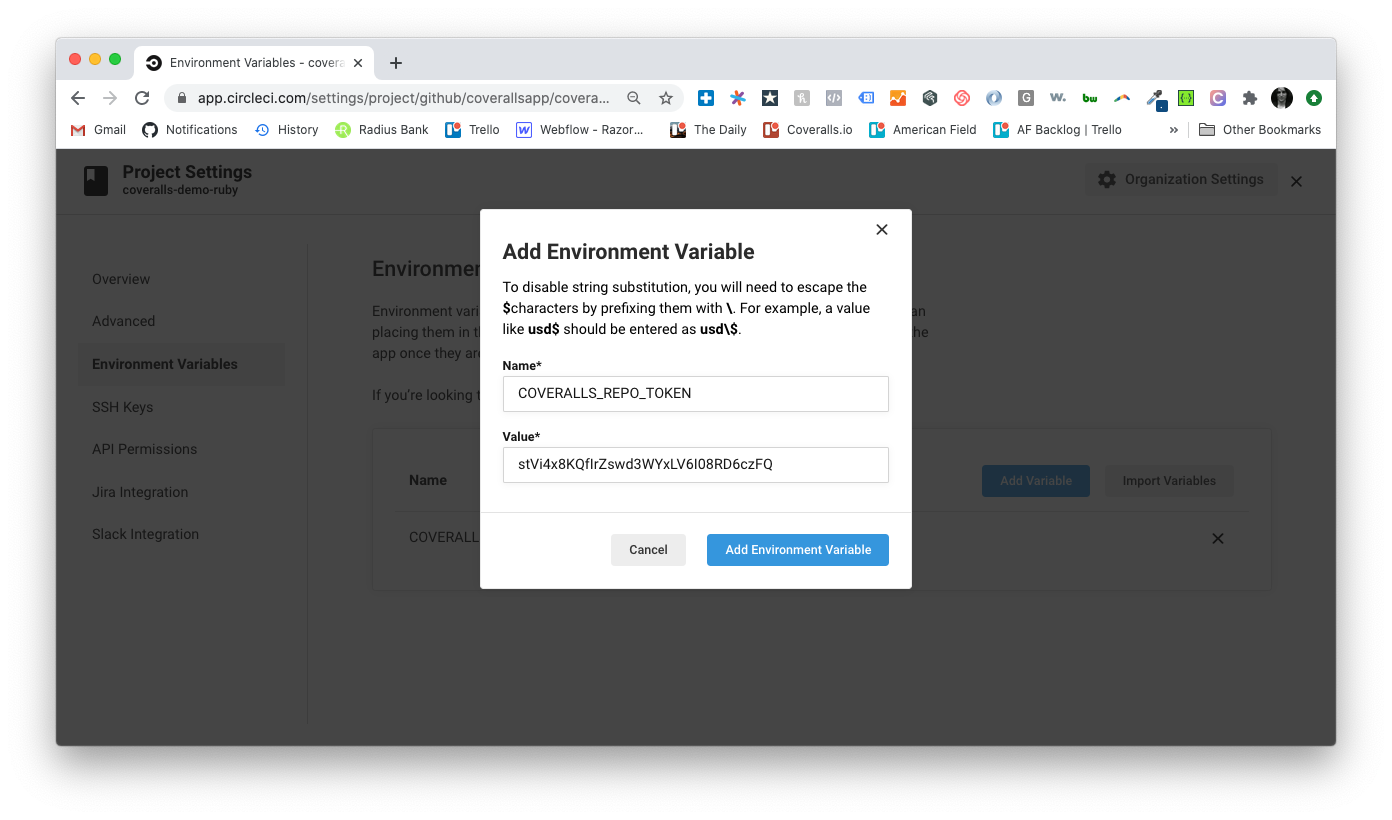 So let’s push all the changes we just made:

Since we understand how test coverage works in this project, let’s verify those same results through the Coveralls service.

Given that we configured our project to use CircleCI and Coveralls, and pushed those changes to our repo, that last push triggered a new build at CircleCI: 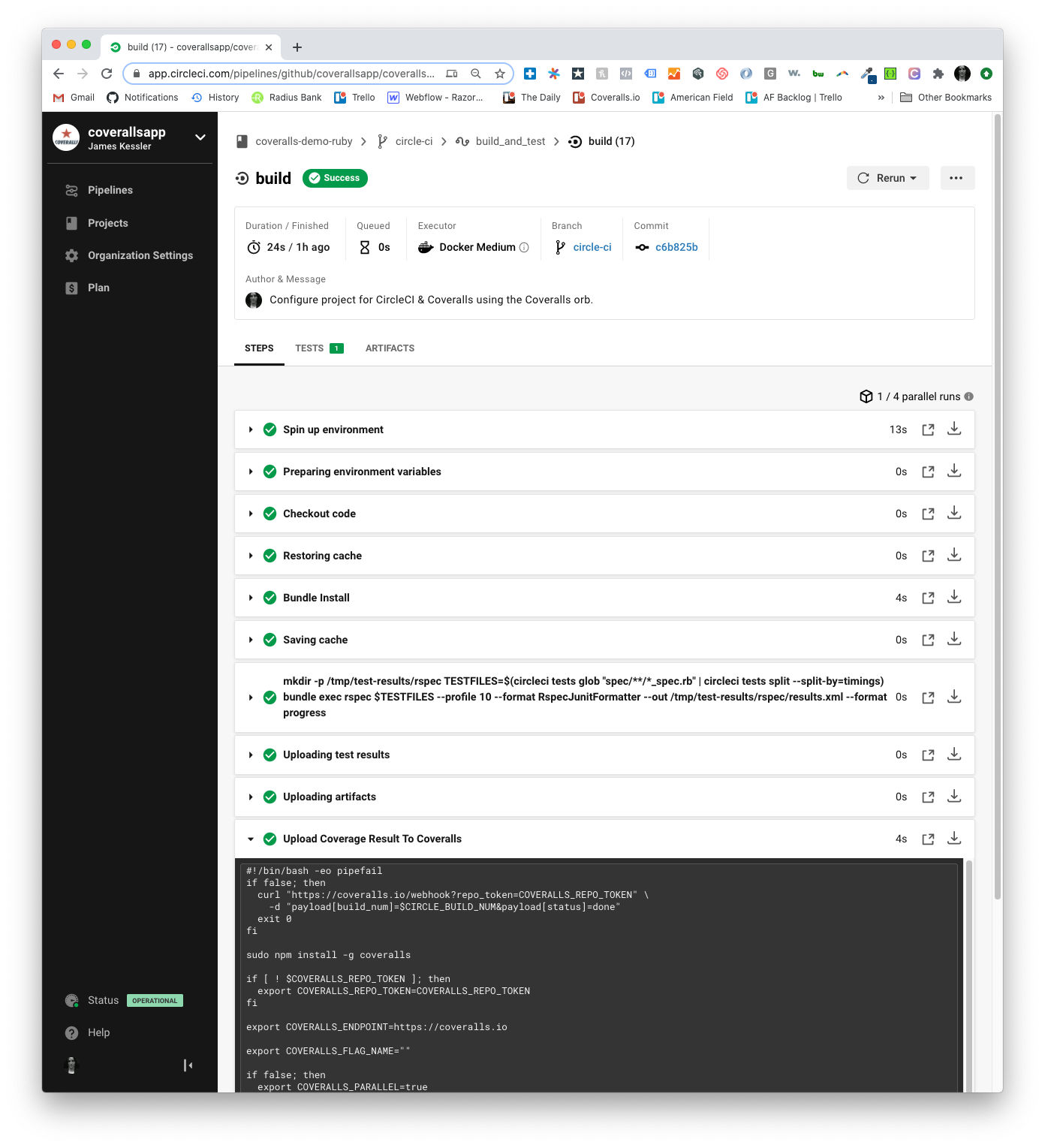 Which in turn uploaded test results to the Coveralls API per the build log:

And triggered a new build at Coveralls: 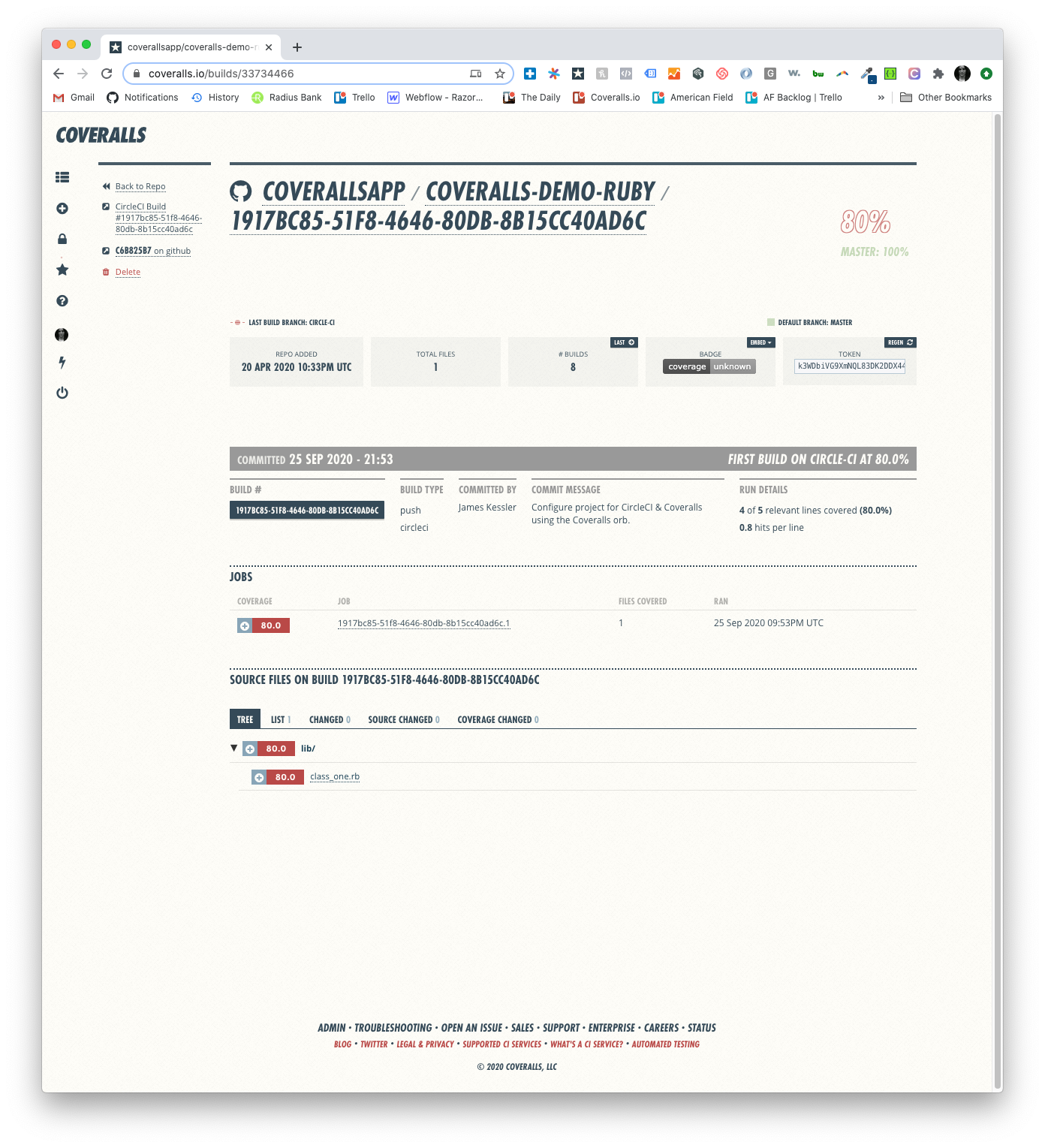 Which shows coverage at 80%. Which is what we expected.

Now, let’s validate that Coveralls is tracking changes in test coverage for our project. To do that, let’s re-add that test that lifts coverage to 100%.

Open the test file, /spec/class_one_spec.rb, and uncomment the second test in the file:

Now, save the file, commit the change, and push it to GitHub:

That push will trigger a new build at CircleCI: 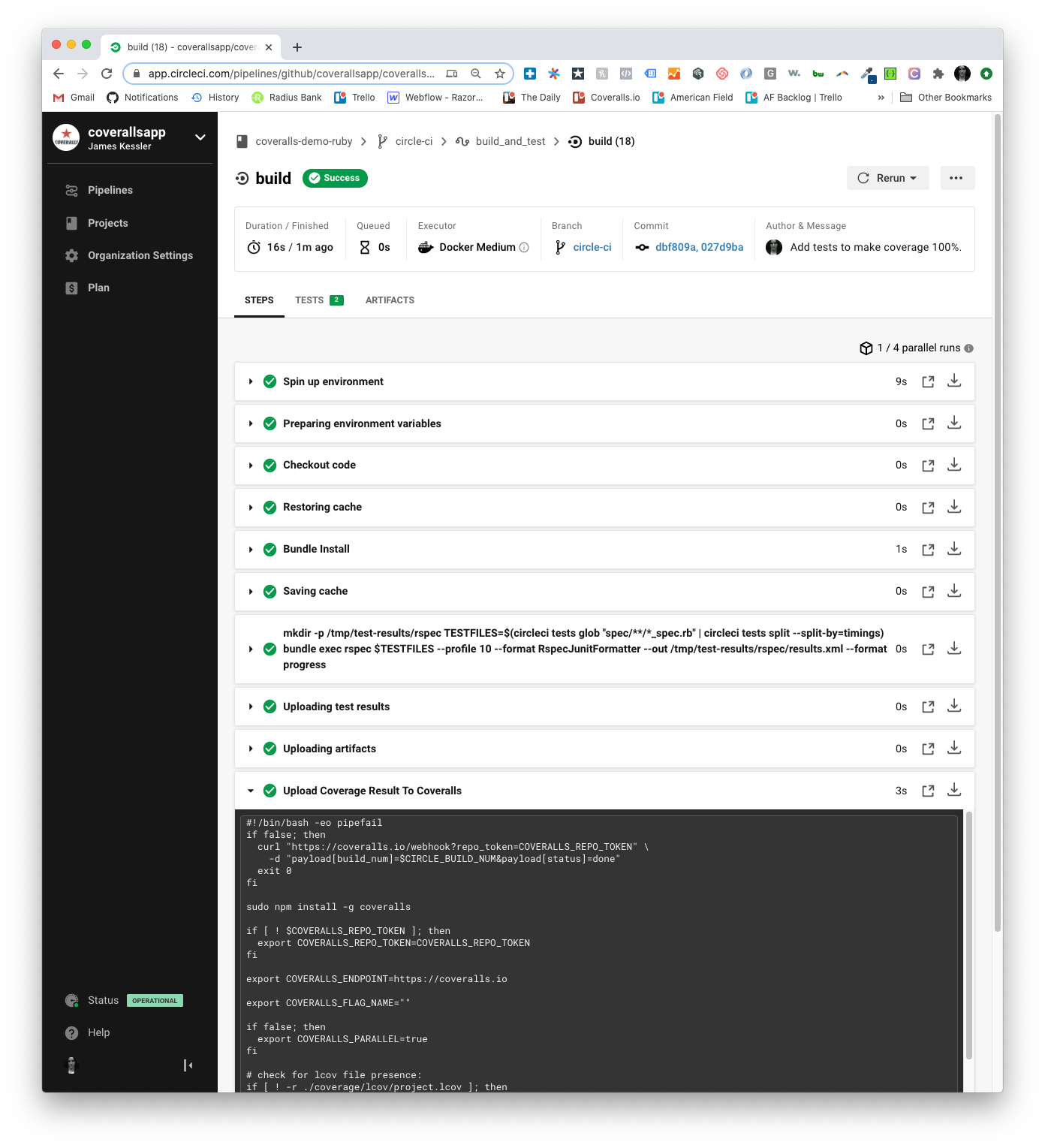 Which, in turn, triggers a new build at Coveralls: 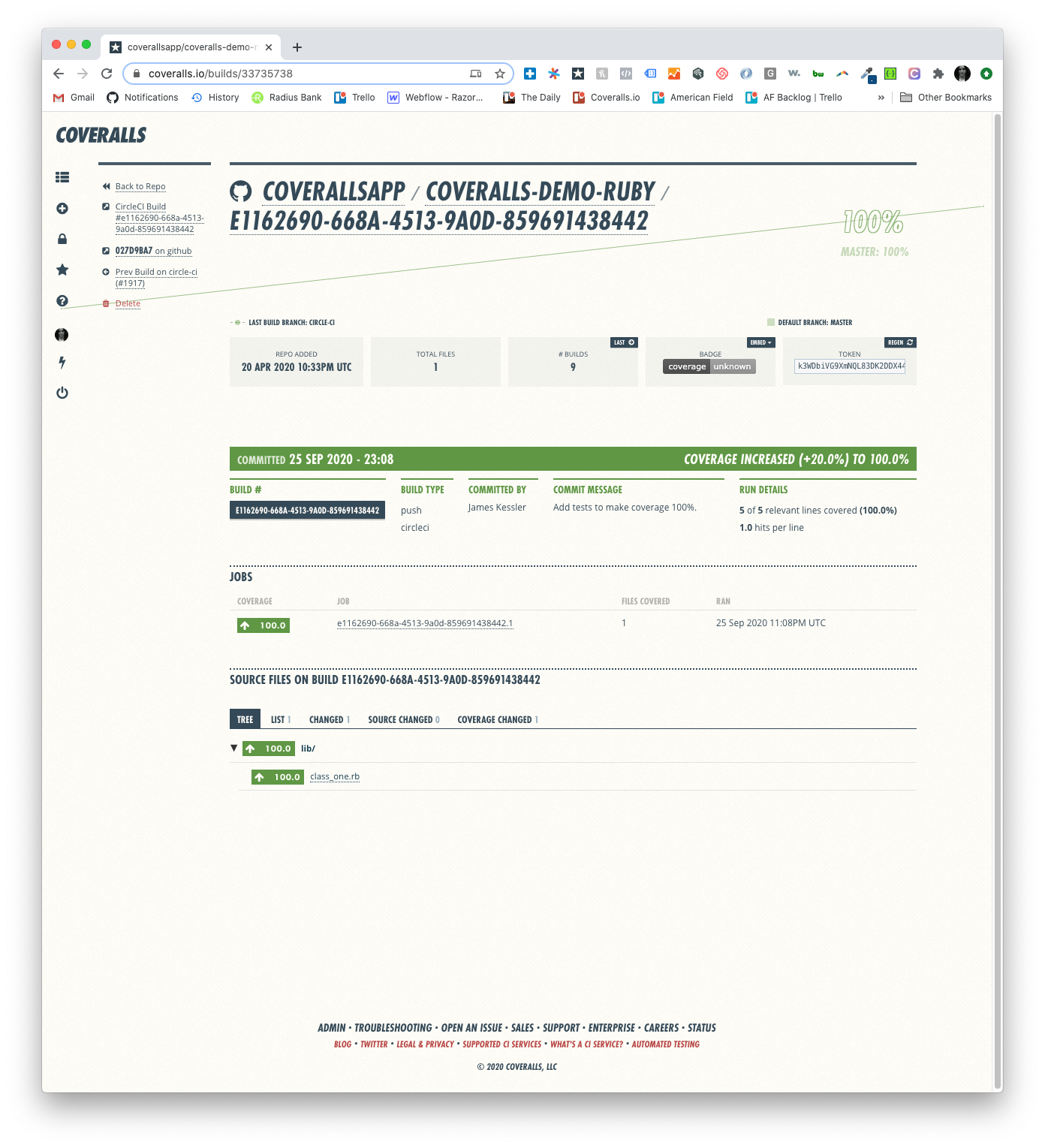 Now that your project is set up to automatically track test coverage, some things you might want to do next include:

Start with the Coveralls docs here.

A healthy codebase is a well-tested codebase, and a healthy project is one where test coverage stays front and center throughout development.

A test coverage service, like Coveralls, lets you track changes to your project’s test coverage over time, surface those changes for your whole team to see, and even stop merges that degrade the project’s quality.

Using CircleCI’s latest orb spec, this tutorial showed how easy it can be to connect your project with a test coverage service by making it part of your CI/CD pipeline, especially when the service leverages the configuration standard of your CI platform.