Documentation for a new type of self-hosted runner from CircleCI, now in open preview.

CircleCI’s self-hosted runner has historically executed each job using a one to one mapping between the CI job and a machine environment (virtual or physical) that has the self-hosted runner binary installed on it. By exclusively running jobs in this manner, users sacrifice several benefits of a container-based solution that are afforded on CircleCI’s cloud platform when using the Docker executor:

Container runner is a technology now in open preview that a user can install in a Kubernetes (k8s) cluster which enables them to run containerized CI jobs on self-hosted compute, similar to how jobs that use the native Docker executor run on CircleCI’s cloud platform.

Container runner is a complement to the machine runner, not a replacement.

After installation of the container-agent binary, the container runner will claim your containerized jobs, schedule them within an ephemeral pod, and execute the work within a container-based execution environment. 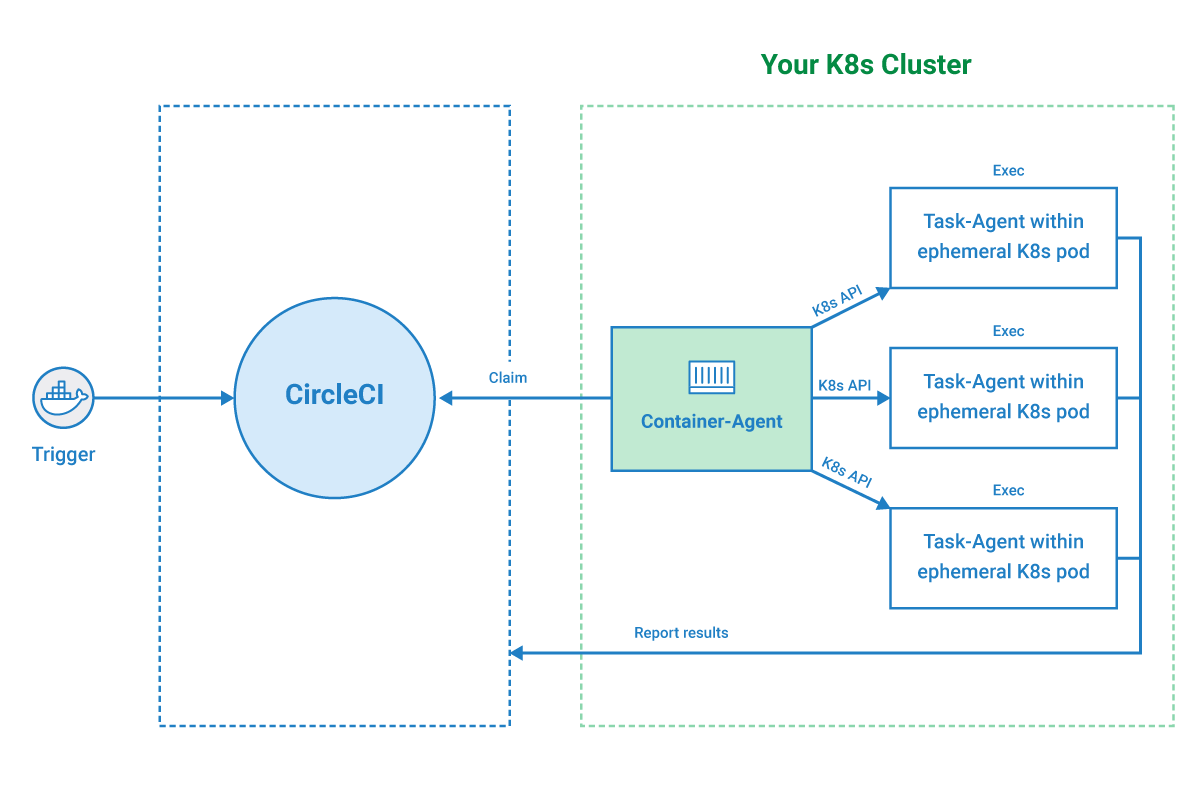 Install the Helm chart with the release name container-agent:

This will deploy the container runner to the Kubernetes cluster as a release called container-agent. You can view the default values by running helm show values circleci/container-agent and override these using the --values or --set name=value flags on the install command below.

Once you have installed the container runner within your cluster, create and trigger a CircleCI job that uses the Docker executor to validate the installation.

Once your configuration file is updated, validate whether the job ran successfully by triggering it and ensuring a green build using the CircleCI web app. See the FAQ section for a full sample config if you are starting from scratch.

Container runner supports claiming and running tasks from multiple resource classes concurrently, as well as customization of the Kubernetes resources created to run tasks for a particular resource class. Configuration is provided by a map object in the Helm chart values.yaml.

The following fields will be overwritten by container runner to ensure correct task function, and expected CircleCI configuration behavior:

Below is a full configuration example, containing two resource classes:

Using the configuration described above provisions a Kubernetes secret containing your resource class tokens. In some circumstances, you may wish to provision your own secret, or you simply might not want to specify the tokens via helm. Instead, you can provision your own Kubernetes secret containing your tokens and specify its name in the agent.customSecret field.

The secret should contain a field for each resource class, using the resource class name as the key and the token as the value. Consider the following resourceClasses configuration:

The corresponding custom secret would have 2 fields:

Due to Kubernetes secret key character constraints, the / separating the namespace and resouce class name is replaced with a . character. Other than this, the name must exactly match the resourceClasses config to match the token with the correct configuration.

Even if there is no further pod configuration, the resource class must be present in resourceClasses as an emtpy map, as shown by circleci-runner/resourceClass2 in the above config example.

The following are CircleCI specific settings:

The following is for Kubernetes object settings. All settings prefixed with agent below are for the container runner pod itself, not the ephemeral pods where jobs are executed.

By default a Role, RoleBinding and service account are created and attached to the container runner pod, but if you customize these, the above are the minimum required permissions.

It is assumed that the container runner is running in a Kubernetes namespace without any other workloads. It is possible that the agent or garbage collection (GC) could delete pods in the same namespace.

Each container runner has a garbage collector which will ensure any pods and secrets with the label app.kubernetes.io/managed-by=circleci-container-agent left dangling in the cluster are removed. By default this will remove all jobs older than five hours and five minutes. This can be shortened or lengthened via the agent.kubeGCThreshold parameter. However, if you do shorten the garbage collection (GC) frequency, also shorten the max task run time via the agent.maxRunTime parameter to be a value smaller than the new GC frequency. Otherwise a running task pod could be removed by the GC.

At this time, if the container runner crashes, there is no expectation that in-process or queued tasks are handled gracefully. As the open preview progresses, additional crash handling will be added and documented.

Container runner allows you to configure task pods with the full range of Kubernetes settings. This means pods can potentially be configured in a way which cannot be scheduled due to their constraints. To help with this, container runner has a constraint checker which periodically validates each resource class configuration against the current state of the cluster, to ensure pods can be scheduled. This prevents container runner claiming jobs which it cannot schedule which would then fail.

If the constraint checker fails too many checks, it will disable claiming for that resource class until the checks start to pass again.

Currently the following constraints are checked against the cluster state:

As an example of how this works, consider the following resource class configuration:

The first resource class has a node selector to ensure it is scheduled to nodes with an SSD. For some reason during operations the cluster no longer has any nodes with that label. The constraint checker will now fail checks for circleci-runner/resourceClass and will disable claiming jobs until it finds nodes with the correct label again. circleci-runner/resourceClass2 claiming is not affected, the checks for different resource classes are independent of each other.

Container runner jobs are eligible for Runner Network Egress. This is in line with the existing pricing model for self-hosted runners, and will happen with close adherence to the rest of CircleCI’s network and storage billing roll-out. If there are questions, reach out to your point of contact at CircleCI.

The same plan-based offerings for self-hosted runner concurrency limits apply to the container runner open preview. Final pricing and plan availability will be announced closer to the general availability of the offering.

Docker in Docker is not recommended due to the security risk it can pose to your cluster.

To build container images in a container-agent job, a user may use:

Note: Third-party tools should be used at your own discretion.

While jobs that run with container-agent cannot use CircleCI’s setup_remote_docker feature, it is possible to use a third-party tool to build Docker images in your container-agent job without using the Docker daemon.

A simple option is to use a tool called Buildah. Buildah can be used in your .circleci/config.yml syntax:

To install the configuration dev/fuse, clone this repository to where you are running Helm commands for your container-agent deployment. Then run:

You can confirm that this has been configured correctly by running kubectl get daemonset -n kube-system and confirming that fuse-device-plugin-daemonset is present and ready.

Once this device has been added, update the container-agent resource class configuration:

This will now let you run Buildah commands with container agent jobs and build containers:

You can also build your own custom image and include the installation of Buildah in your Dockerfile:

If you plan to use a CircleCI convenience image, ensure you add the repository for installation to your job’s steps:

Additionally, set the isolation variable to default to chroot:

You can then follow the same instructions as Using the Buildah image above to add the fuse device plugin to the container-agent deployment and update your .circleci/config.yml file to use your custom images and build container images in those jobs.

As container runner is in an preview state, there are several known limitations. This is not meant to be an exhaustive list, but rather a selection of the limitations that are most notable. This list is not static, and lack of support at this time is not an indication of the functionality never being supported.

How to receive technical help