Cinnamon AI, a global enterprise AI company with offices in Tokyo, the U.S., Vietnam, and Taiwan, wants to build AI platforms that can do a better job of parsing data than humans – especially with unstructured data such as emails, voice messages, and video. The company’s mission is to improve human potential by eliminating repetitive tasks, using Cinnamon AI’s document reader to automate data extraction from unstructured documents.

With ambitious goals, Cinnamon AI must also continually optimize its solution for multiple cloud providers, including AWS, Google Cloud Platform, and Azure – as well as the on-premise version of their product. Saving time in development pipelines was important, explains Sony Huynh, Cinnamon AI’s DevSecOps lead – as was the ability to continually and cost-effectively improve the product.

“We needed to reduce operational costs and prevent human mistakes, so we can sell our products at a lower price and higher quality,” Sony says of Cinnamon AI’s competitive challenges.

“It’s software as a service, so we don’t need to spend time maintaining it,” Sony says – unlike Jenkins, which was self-hosted. “CircleCI also has a good UI/UX.” With CircleCI, Cinnamon AI can also use SSH with CircleCI runners for troubleshooting – and support multiple runners such as containers and machines.

Cinnamon focuses on containerization technology so speeding up the build process, specifically for Docker images, is very important. The company’s goals of saving time and boosting productivity were quickly met with CircleCI. “Caching hastens our workflows because the Docker images from our research team are usually huge – about 10 gigabytes,” says Luan Pham, Senior Researcher for Cinnamon AI. “We can quickly develop our CI pipeline because caching reduces the wait time from hours to minutes.” 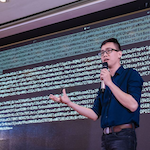 “We can save time by scaling the number of parallel jobs, and we can save costs with CircleCI’s pay-as-you-go solution.”

In the two years since Cinnamon AI adopted CircleCI, the company has been able to scale for growth while also managing budgets. “We can save time by scaling the number of parallel jobs, and we can save costs with CircleCI’s pay-as-you-go solution,” Sony says.

CircleCI’s ease of use also contributes to the time savings, as well as allowing developers to take on more CI/CD tasks. “Since we adopted CircleCI, our developers are encouraged to implement their own automated tests,” Sony says. “And the automated build, test, and deploy processes are so easy to complete.”

As developers moved away from maintenance of their previous CI/CD solution to devote more time to testing and shipping code, they’re more focused on the product’s quality. Says Sony, “We’ve been able to realize our goal of a true DevOps culture.”

Cinnamon AI is a global enterprise AI startup that provides an AI document reader to automate data extraction from unstructured documents to the financial industry. The company has acquired 50+ paying customers from large Japanese corporations, and raised $39M in Series C funding in April 2020.